Since, methanesulfonicacid (MSA) or mesylate is the counter ion of doxazosin mesylate (DZM), the usage of methyl, ethyl, isopropyl or n-butyl alcohol either at any stage of synthesis or crystallization, leads to the formation of genotoxic methyl, ethyl, isopropyl and n-butyl methanesulfonates, respectively. As on today, a threshold of toxicological concern (TTC) value of 1.5 μg/day intake of a genotoxic impurity is permitted. The permitted quantity in ppm is the ratio of TTC in μg/day and dose in g/ day [5]. Since, 8 mg of DZM is administered per day [6]. Permissible intake of genotoxic impurities is 188 ppm/day. Even though some analytical methods were reported [7-13] for the determination of DZM, no method was reported so far for the identification and determination of alkylmethanesulfonates in DZM, except the determination of MMS and EMS in imatinib mesylate [14]. Hence, we have developed a rapid GC-MS method that can quantitate alkyl methanesulfonates in DZM at the permissible levels. This method is validated as per ICH guidelines [15].

GC-MS analysis was carried out on GCMS-QP2010 system (Shimadzu Corporation, Kyoto, Japan) having GCMS solution software. AMSs were separated on DB-5 capillary column (Agilent Technologies, USA, 30 m×0.32 mm i.d.×1.0 μm film). One micro litre of 1000 ppm mixture solution with 1:5 split inlets was selected for injection. The GC oven temperature program utilized an initial temperature of 80º and an initial holding time of 3 min, and then increased at 10º/min to 220º. The final temperature was held for 8 min. The injection temperature, GC-MS interface and ion source temperature were 200, 240 and 240º, respectively. Helium was used as the carrier gas with a flow rate of 1.46 ml/min. The ionizing energy was 70 eV. The mass detector gain is 1.5 kV. The elution order was observed from the total ion chromatogram (fig. 1) using 94 ppm of alkyl methanesulfonates mixture. All the four alkyl methanesulfonates were identified using the National Institute of Standard Technology mass spectral library. Validation was done in Selective Ion Monitoring (SIM) mode.

All the four alkyl methanesulfonates are liquids, hence it was planned to separate them by gas chromatography, identify and confirm them by mass spectrometry. DZM is insoluble in dimethyl formamide, dimethyl sulfoxide. Hence acetonitrile, water and ammonia (90:9:1) v/v/v mixture was used as diluent. Ammonia was used to reduce peak tailing. AMSs mixture solution (1000 ppm) was prepared as stock solution. Initially the experiments were carried out by using DB-1 column (100%-dimethylpolysiloxane) for the separation of AMSs, but the resolutions were found to be very poor. Then, this column was replaced by DB-Wax column and same result was found. Hence, DB-5 column (5%-phenyl-95%-dimethylpolysiloxane) was used and good resolutions were observed. An optimum injection volume of 1 μl was chosen. The split ratio was fixed as 1:5 depending on the detector response. An initial column temperature of 800 was found to be optimum.

The present method is validated as per ICH guidelines [10]. MMS, EMS, IPMS and NBMS mixture solution (1000 ppm) was injected and the limit of detection (LOD) and the limit of quantification (LOQ) values were determined at the lowest concentrations at which signal-to-noise ratio is 3 and 10, respectively. LOD and LOQ values for all the AMSs were found to be 2 and 6 ppm, respectively. Linearity of the method was checked by plotting calibration curves between the peak areas versus the concentration of AMSs over the range 6-225 ppm. The slope, intercept and correlation coefficient values were derived from liner least-square regression treatment. The correlation coefficient values reported in (Table 1) indicate the best linearity of the method. The precision of the method was evaluated in terms of repeatability and intermediate precision. The repeatability is determined by calculating the relative standard deviation (% RSD) of six replicate determinations by injecting freshly prepared 6 ppm mixture solution separately on the same day. For intermediate precision, 6 ppm mixture solution was injected on six different days. The low % RSD values via peak areas confirm the good precision of the developed method (Table 1). AMSs were not detected when three pure R and D samples of DZM (30 mg/ ml) were analyzed in the present method. Hence, theaccuracy of the method was determined by spiking AMSs mixture at three concentration levels (6, 188 and 225 ppm) to 300 mg of DZM and making the volume to 10 ml with diluent. Each determination was carried out for three times. The recovery data presented in (Table 1) indicates the accuracy of the method. The method is specific because mass detector was used in the analysis. The mass spectra of EMS, IPMS, NBMS and MMS, shows Parent peaks in fig. 2 at m/z 124 (C3H8O3S (a)), 138 (C4H10O3S(b)) 152 (C5H12O3S (c)), and 110 (C2H6O3S (d)), respectively corresponding to their molecular weights. In the varied gas chromatographic conditions of ±5 % on the carrier gas flow, ±50 on the initial oven temperature, ±10/ min on the ramp rate, the retention times and peak areas of AMSs were found to be same indicating the robustness of the method. 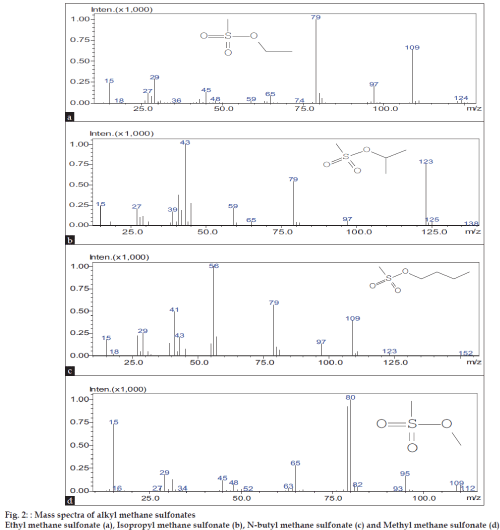 The aim of this study is to develop a GCMS method that can quantify four alkyl methanesulfonates in doxazosin mesylate. The developed GC-MS method was optimized based on the resolutions of AMSs peaks and validated as per ICH guidelines. The method well suits for the intended purpose.

The authors are grateful to Dr. B. M. Choudary, Managing Director, Ogene Systems (I) Pvt. Ltd, Hyderabad for providing facilities to carry out this research work.