A simple, rapid, accurate and precise analytical method for determination of secondary and tertiary amines in hydrochloride salt form of drug substances in non aqueous medium, which does not require any derivatization, was developed by headspace gas chromatography. Dimethylamine hydrochloride and triethylamine hydrochloride were analyzed in metformin hydrochloride. The sample was dissolved in a vial containing dimethyl sulphoxide and imidazole. The vials were incubated at 100º, for 20 min. The syringe temperature was maintained at 110º. DB624 column with 30 m×0.32 mm i.d., 1.8 µm film thickness was used. The injector and detector temperature were 200° and 250°, respectively. The analytical program used was carrier gas (nitrogen) flow rate: 1 ml/min; injected gas volume: 1.0 ml; split ratio: 1:10; oven temperature program: 40º for 10 min, followed by an increase up to 240° at 40º/min. The analytical method was validated with respect to precision, recovery, limit of detection and quantification and linearity.

Organic solvents are used in the synthesis of pharmaceutical compounds and they must be controlled to a minimum level in the final product. Their limits are fixed based on their toxicity[1]. In general, these residual solvents are analyzed by headspace gas chromatographic technique. Most of the common organic solvents such as toluene, hexane, benzene, chloroform, dichloromethane are chemically nonreactive and does not involve in any chemical reaction during analysis. Selection of suitable diluent for analysis for these types of residual solvents is relatively simple. For these solvents, diluents are selected based on their higher boiling point, their solubility in the sample and the organic solvents to be determined.

Aliphatic amines such as triethylamine and dimethylamine are used in synthesis of many pharmaceutical products. Triethylamine should be controlled to the level of maximum 320 ppm according to European Directorate of Quality Medicines Document (EDQM) [2,3]. Limit for dimethylamine is not mentioned in any literature. However, as per ICHQ3A (R2), the limit for unspecified impurities is 0.10%, i.e., 1000 ppm[4]. These amines are chemically reactive in nature and their influence in experimental condition during analysis by headspace gas chromatography was briefly studied by Kott and Chen[5]. Various techniques of analyzing organic amines after derivatization using gas chromatography and headspace gas chromatography (GC) techniques were reported by Hiroyuki[6]. Influence of pH of the diluent in aqueous medium during static headspace analysis of aliphatic amines was reported by Maris et al. [7]. Analytical method for determination of aniline in water using microwave assisted headspace solid phase micro extraction (SPME) technique was reported by Yan and Jen[8].

The aim of the present study is to find out a suitable base which can convert the salt form of amine in to free base in presence of the drug substance in nonaqueous medium. It was found that imidazole was able to convert the salt form of amine in to free base when it was used in non-aqueous medium. The novelty of our study is that imidazole has not been used as a diluent for preparation in any of the residual solvents methods published so far. Metformin hydrochloride was used as the drug substance for the study. Dimethylamine was used as a raw material in the synthesis of metformin hydrochloride[11]. Triethylamine is in general used as a base for many organic reactions. A simple, rapid, accurate and precise headspace gas chromatographic technique for analyzing dimethylamine hydrochloride and triethylamine hydrochloride in metformin hydrochloride without any derivatisation was developed.

Analytical method validation was carried out with respect to system suitability, linearity, limit of detection (LOD) and limit of quantification (LOQ), precision and accuracy. Specificity of the analytical method was established by injecting individually diluent, standard solutions of dimethylamine hydrochloride and triethylamine hydrochloride in to the chromatograph. For LOD and LOQ, various concentrations of dimethylamine and triethylamine were prepared and injected in to the chromatograph up to their detectable concentration and quantifiable concentration. Precision of the method was determined by injecting six replicate preparations of sample. Accuracy of the method was carried out by spiking the analytes at three different levels, i.e., 50, 100 and 150% of the specification limit. The samples at each level were prepared in triplicate and injected in to the chromatograph. Linearity of dimethylamine hydrochloride and triethylamine hydrochloride were carried out by injecting standard solutions of these analytes from LOQ to 150% level of specification limit. Each level was prepared in triplicate and analyzed.

Thermo focus GC was equipped with split/split less injector, column oven, a flame ionization detector, headspace auto sampler (Thermo). This auto sampler was equipped with a glass syringe (2.5 ml capacity) with temperature controller and vials of standard size and volume of 20 ml capacity. The vial temperature was controlled by using an incubator equipped with automatic mixing system by micro vibration. The vials containing solutions were kept at 100°, for 20 min. Vials were pressurized due to incubator temperature. The syringe temperature was maintained at 110°. DB624 column with 30 m×0.32 mm i.d., 1.8 μm film thickness was used. The injector and detector temperature were 200° and 250°, respectively. The analytical program used was carrier gas (nitrogen) flow rate: 1 ml/min; injected gas volume: 1.0 ml; split ratio: 1:10; oven temperature program: 40° for 10 min, followed by an increase up to 240° at 40º/min.

In general, DMSO, N-methyl pyrrolidone, 1,3 dimethyl 2-imidazolidone and dimethyl formamide are the nonaqueous solvents which are being used as a solvent medium for preparation of samples for residual solvents analysis. These solvents are preferred for residual solvent analysis because of their high solubility and high boiling point. Experiments were carried out using all these solvents. It was not possible to convert the salt form of the amine in to free base, using these solvents. Imidazole dissolved in DMSO was preferred because of its basic as well as buffer nature and trials were made. It was found that imidazole in DMSO was able to convert the salt form of amine in to free base quantitatively. Thus, DMSO-imidazole mixture was selected as suitable diluent for this method. 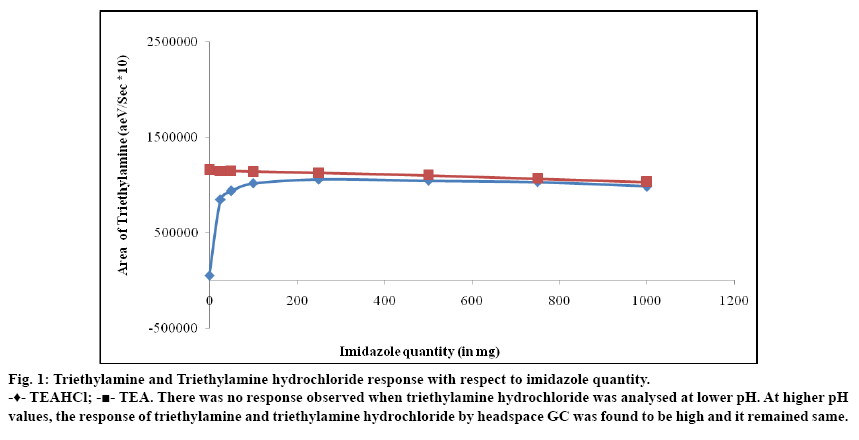 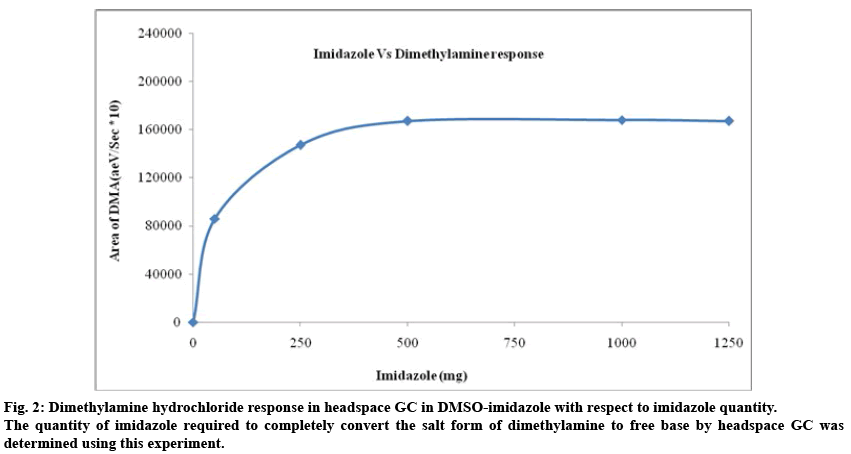 Fig. 2: Dimethylamine hydrochloride response in headspace GC in DMSO-imidazole with respect to imidazole quantity.
The quantity of imidazole required to completely convert the salt form of dimethylamine to free base by headspace GC was determined using this experiment.

Specificity of the method was confirmed as there was no any interference due to diluent at the retention times of the triethylamine and dimethylamine. LOD was determined by calculating the signal to noise ratio with respect to the corresponding noise in the blank injection. Precision at LOQ level was carried out by injecting six different preparations of analytes at their LOQ level and the percentage relative standard deviation (% RSD) for area was calculated. The results are tabulated in Table 2.

Precision at limit of detection (LOD) and limit of quantification (LOQ) was performed in six replicates.

TABLE 2: LOD AND LOQ FOR DIMETHYLAMINE AND TRIETHYLAMINE

For linearity study five different concentrations of triethylamine and dimethylamine in the range of 0.37- 19.5 μg/ml and 2.8-37.5 μg/ml, respectively were prepared. The vials were prepared in triplicate for each concentration and analyzed. A linear graph was plotted with respect to area response against the concentration of the analytes and their corresponding correlation coefficient, slope and intercept values were calculated. The results are attached in Table 3.

Linear response for dimethylamine and triethylamine was observed. The % intercept was found to be below 5% for both solvents.

The proposed method for determination of dimethylamine hydrochloride and triethylamine hydrochloride in metformin hydrochloride is a direct method and it does not involve in any derivatisation. The possible interaction between the analyte, drug substances and the solvent medium and their impact are discussed in detail. The analytical method was validated for precision, linearity, limit of detection, of quantification and accuracy and the results were in acceptable limits. Imidazole was able to convert the salt form of amine in to free base quantitatively and hence it can be used as a diluent in residual solvents for non-aqueous medium. This methodology mentioned in this paper shall be extended for determination of organic volatile amines in the salt for drug substances.

The authors extend their appreciation to the Head, Pharmaceutical Research and Development, Piramal Enterprises Limited, Mr. Arno Enose for organizing the sample for study and supporting the project.