In the present study, two brands of Kumaryasava and Mustakarista medicinally important ayurvedic preparations were studied for quality control parameters like physiochemical properties, ethanol content by specific gravity and gas chromatographic methods and the total phenolic content. Evaluation of physiochemical properties and total phenolic contents resulted in establishing ranges for routine analysis. In both the formulations, ethanol content observed by specific gravity method varied from 0.9 to 1.9% on day 0 and reduced on storage for 30 days ranging from 0.1-0.6% v/v. Similarly, ethanol content determined by GC on day 0 varied from 0.1-1.6% v/v and on 30th day from 0.011-0.025% v/v. This reduction in ethanol content on storage might be due to loss caused by frequent opening of the container.

Asavas and aristas are medicinal preparations made by soaking the drugs, either in coarse powder or in the form of decoction (kasaya), in a solution of sugar or jaggery, as the case may be, for a specified period of time, during which it undergoes a process of fermentation generating alcohol, thus facilitating the extraction of the active principles contained in the drugs. Alcohol, so generated, also serves as a preservative [1]. The formulation Kumaryasava is useful in the treatment of abdominal lump, cough, asthma, piles, neurological diseases, epilepsy, pthisis, abdominal diseases, diseases of neck region, digestive impairment, abdominal pain and menopause. Mustakarista is useful in the treatment of dyspepsia, digestive impairment, malabsorption syndrome, gastroenteritis with piercing pain. The main ingredients used in Kumaryasava are Aloe barbadensis, Terminalia chebula, Woodfordia fruticosa, Myristica fragrans, Syzygium aromaticum, Piper cubeba, Nardostachys jatamansi, Ricinus communis, jaggery and water. The main ingredients used in Mustakarista are Cyperus rotundus, Woodfordia fruticosa, Trachyspermum ammi, Zingiber officinale, Piper longum, Syzygium aromaticum, Trigonella foenum-graecum, Plumbago zeylanica, jaggery and water [2].

Standardized ayurvedic formulations of uniform quality are essential for beneficial therapeutic use. Due to lack of standards and quality control methods, there are batch‑to‑batch variations in the formulation. Among the asava and arista preparations, Kumaryasava and Mustakarista the fast moving products in the market with high medicinal value were selected for the study. As part of standardization procedure, the formulations were tested for physicochemical parameters like pH, total solids, loss on drying, acid value, boiling range, specific gravity, ethanol content, viscosity and weight per ml. The variation in ethanol content in asava and arista preparations stands a major problem in fixing up their limits as a quality control parameter. Thus to establish its limit over a period of time the present study focused on determining the ethanol content of the formulations Kumaryasava and Mustakarista on a storage period of 30 days by specific gravity as well as chromatographic (GC) methods.

The ayurvedic formulations Kumaryasava and Mustakarista have been selected from reputed companies and coded as A, B, C, D–Kumaryasava and E, F, G, H–Mustakarista, two different batches of products of two companies for each formulation. Chemicals and solvents used were procured from Merck India limited. The gas chromatograph used for the study was Chemito GC7610 Carbowax 20 M in steel column. UV spectrophotometer used was the Shimadzu Pharma spec UV‑1700.

Acid value was determined by dissolving 10 g of formulation in 50 ml equal volume of ethanol previously neutralized with 0.1M KOH to phenolphthalein solution. To this solution, 1 ml of phenolphthalein was added and titrated with 0.1M KOH until solution remains faint pink after shaking for 30 s [3]. A distillation unit fitted with a thermometer was employed to determine the boiling range of the Kumaryasava and Mustakarista. The apparatus consisted of a distilling flask of 200 ml capacity, a condenser of 60 cm long, a receiver of 100 ml capacity, which was graduated with 1 ml division and a thermometer showing 0‑240º. The thermometer was positioned in the centre of the neck and the entire assembly was shield after dropping about 100 ml of the sample to the distilling flask. With the aid of metallic stand and clamps, the entire assembly was placed on an electric heater having a thermostat, so that adjustment in temperature could be done conveniently. Distillation was switched on and the temperature of first drop of the distillate was recorded. Then the temperature was increased in such a way that the receiver could collect 4‑5 ml/min. The process was continued until 25% (25 ml) of the distillate reached the receiver and the temperature of the last drop of the distillate to the receiver was also noted.

A shallow, flat bottomed flanged dish, about 75 mm in diameter and about 25 mm deep, made of nickel was used for this analysis of total solids. Samples of 5 ml of Kumaryasava and Mustakarista were pipetted out, placed in the dish, evaporated at as low temperature as possible on a water bath until the solvent was removed and the residue was nearly dry. Then the dish was placed in an oven and dried to constant weight at 105º. It was cooled in a desiccator and weighed immediately [4].

About 10 ml (11.02 g) of the Kumaryasava and Mustakarista were accurately pipetted out and transferred to a tarred china dish, which was known for its weight and kept in a hot air oven at 100‑105º for an hour. Then, the sample was weighed along with china dish to deduct the actual weight of tarred china dish. The weight of the content was noted to calculate the percentage loss on drying with reference to Kumaryasava and Mustakarista [5].

Viscosity of Kumaryasava and Mustakarista was determined by means of a capillary viscometer at room temperature. The viscometer was washed and dried completely. Then the viscometer was filled and examined through the L tube to slightly above the mark G using a long pipette to minimize wetting the tube above the mark. The tube was placed vertically in a water bath maintained at temperature of 35º and allowed to stand for half an hour to reach equilibrium. The volume of Kumaryasava and Mustakarista was adjusted so that the bottom of the meniscus settled at the mark G. The liquid was sucked to the point about 5 mm above the mark E and the pressure was relieved. Time taken for the bottom of the meniscus to fall from the top of mark E to the top edge of mark F was measured. Then, the kinematic viscosity (V) in mm2/s using the expression V=Kt was determined on a liquid of known viscosity such as dextran injection or saline [6].

Weight per ml of a liquid is the weight in g of 1 ml of the liquid when weighed in air at room temperature. A thoroughly clean and dry pycnometer was selected and filled with Kumaryasava and Mustakarista and weighed in air at room temperature. The procedure was repeated 3 times and average value of the weight of 1 ml of Kumaryasava and Mustakarista was calculated [1]. pH of the syrup was measured using a digital pH meter calibrated with buffer tablets of pH 4.00 and pH 7.0. pH was measured at 0, 7, 14 and 30 days of opening the container.

Twenty five milliliters of the formulations (A‑F individually) being studied was transferred to a distillation flask. It was diluted with 150 ml of water, small quantity of pumice powder was added and distilled till not less than 90 ml of the distillate was collected into a 100 ml volumetric flask, diluted to volume with distilled water at 24.9 to 25.1°. Relative density at 24.9 to 25.1° was determined and ethanol content was calculated [7]. The ethanol content was determined by specific gravity method at three levels (i) at the opening of the container (ii) after 7 days of opening the container and (iii) after 30 days of opening the container.

A simple, rapid, precise and accurate GC method was used for determination of ethanol in the marketed preparations of Kumaryasava and Mustakarista. GC analysis was performed on Chemito GC7610 with flame ionization detector using Carbowax 20M (stationary phase) packed with steel column with inner diameter of 2 mm. Nitrogen, the carrier gas was used at a flow rate of 1 kg/cm2/min. The oven temperature was maintained at 20‑50° and the detector at 280°, injector at 140‑250º. A range of standard solutions of ethanol was prepared containing 1, 2, 3, 4 and 5% v/v of ethanol using ethanol 98% and HPLC grade water. From the standard solution, 1 ml was diluted to 10 ml with HPLC grade water. Then 1 μl of solution was injected and chromatogram was recorded. The area was plotted against concentration of ethanol to obtain a calibration graph. For sample analysis, 25 ml of syrup was taken in a 500 ml distillation flask. To this 5 ml of 0.1 N sodium hydroxide solution, 10 mg of phenolphthalein powder and 150 ml of HPLC grade water were added. Resulting mixture was heated to 110° and 100 ml of distillate was collected. Distillate (1 ml) was diluted to 10 ml with HPLC grade water and an aliquot of this solution was analyzed as described earlier and chromatogram was noted [8]. The ethanol content of the formulations was determined by gas chromatography method at two levels (i) at the opening of the container and (ii) after 30 days of opening of the container.

All the samples were subjected to qualitative tests for the identification of various active constituents [9]. Total phenols were determined by Folin Ciocaltaeu method [10]. A diluted formulation (0.5 ml of 1:10 g/ml-1) or gallic acid standard was mixed with Folin Ciocalteau reagent (5 ml, 1:10 diluted with distilled water) and aqueous Na2CO3 (4 ml, 1M). The mixtures were allowed to stand for 15 min and the total phenols were determined by colorimetry at 765 nm. The standard curve was prepared using 0, 50, 100, 150, 200, 250 mg/l solutions of gallic acid in methanol: water (50:50 v/v). Total phenol values were expressed in terms of gallic acid equivalent (mg/g of dry mass), which is a common reference compound.

Change in pH of the formulations kumaryasava and mustakarista with storage period. Results are presented as mean±standard deviation, n=3 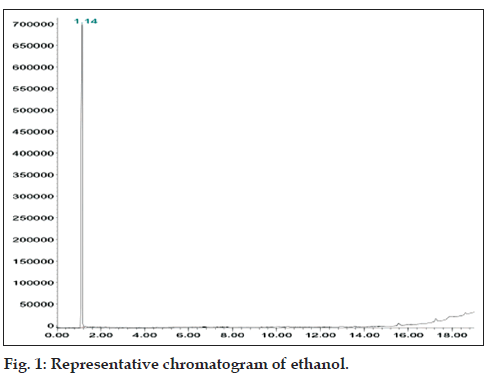 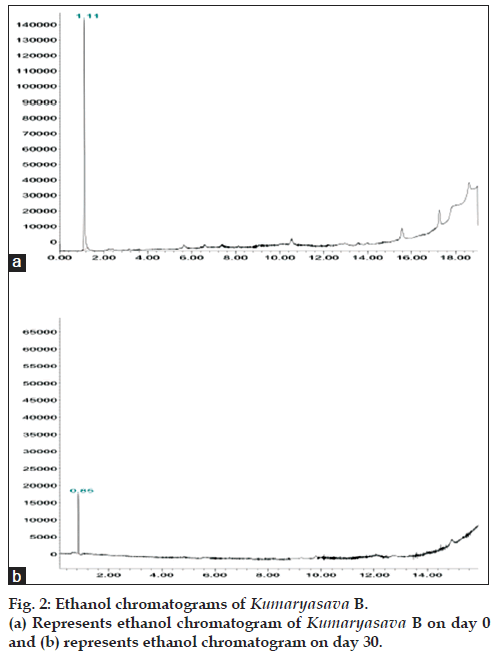 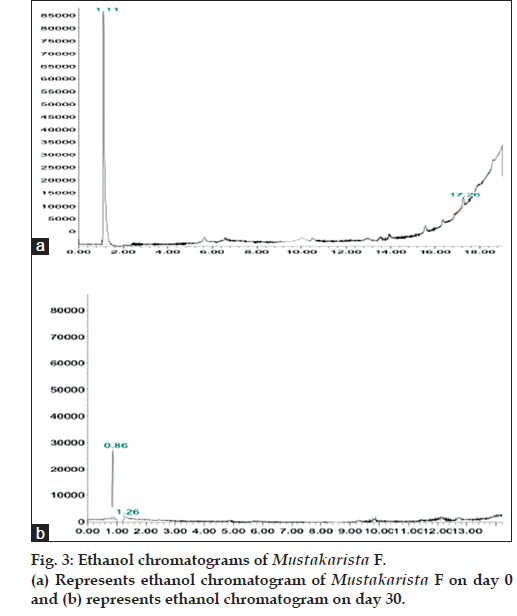 Preliminary phytochemical analysis was performed to identify the secondary metabolites by chemical test. The test showed the presence of various phytochemical constituents like carbohydrates, glycosides, amino acids, saponins, phenols, tannins, flavonoids and absence of protein, alkaloids and phytosterols. Quantitative phytochemical analysis was done for total phenolics using Folin‑Ciocalteau reagent by UV spectroscopy. The results are shown in Table 4. The total phenolic content (TPC) in the formulations was found to be 0.1% for both the samples A and C of Kumaryasava and 0.09, 0.08% for E and G of Mustakarista, respectively. Dash and Junius 2003 [2] reported the standardized limit of total phenolics for the formulations to be NLT 0.06% w/v. Thus the values correspond to the limits mentioned.

To conclude, quality control parameters of the marketed ayurvedic formulations Kumaryasava and Mustakarista were studied and different ranges of values were established for the physiochemical parameters and total phenolics, whereas the alcohol content determined among the batches and brands were not consistent. Thus the ayurvedic formulations need much attention in manufacturing processes as well as quality control parameters to establish its quality and safety.