Withania is a small shrub possessing medicinal value commonly found in the Indian subcontinent. Quantitative determination of withaferin-A, was undertaken to provide an easy and simple analytical method, which can be used as a routine quality control method. RP-HPLC was performed using acetonitrile and water as mobile phase. The detection and quantification was performed at a wavelength of 225 nm. Linearity of detector response for withaferin-A was between the concentrations 0.005% to 0.02%. The correlation coefficient obtained for the linearity was 0.993. The recovery value of standard withaferin-A was 94.4%. Low value of standard deviation and coefficient of variation, are indicative of high precision of the method. The system was successfully used to investigate the marker compound in different plant parts of W. coagulans and W. somnifera.

Withania (Solanaceae), is a small shrub distributed in east of the Mediterranean region, extending to South Asia. Two species, Withania coagulans Dunal and Withania somnifera Dunal, are found in India. In India, W. coagulans and W. somnifera are known by the same names in most of the regional languages. In the market, no distinction is made between the berries obtained from W. coagulans and W. somnifera. Both the species have identical macroscopical features of roots, such as smooth and whitish surface, and short and starchy fracture. The roots of the W. coagulans are however, characterized by the isolated groups of non lignified cells in the xylem tissues, calcium oxalate crystals in the phelloderm cells, and triseriate medullary rays [1].

W. somnifera is a valuable herb in Ayurvedic medicine, and as such, was used and cultivated for centuries in India. Roots, leaves and preparations thereof, are traditionally used as tonic, hypnotic, sedative, and diuretic. The biological activities of withanolides, especially of the dominant withaferin-A have been studied extensively. Notable activities reported for this compound, include antiinflammatory, anticonvulsive, antitumor and antioxidant properties [2-5]. Claiming adaptogenic effects, aswagandha products are available throughout the United States of America as dietary supplements [6,7]. W. coagulans leaves are used in Pakistan as a vegetable, and as a fodder for camels and sheep. They are also employed as a febrifuge. The leaves are chewed for cleaning teeth, and the smoke of the plant is inhaled for relief in toothache [1].

Withanolides are ergostane type of steroids with atoms C22 and C-26, bridged by a δ-lactone functionality, and an oxidized C-1 position. These compounds are specific for the solanaceae family, and in particular, for the genus Withania, and thus they are used as marker compounds [8] The biological activities of withanolides, especially of the dominant withaferin-A has been studied extensively and reported from the roots and leaves of both the species of Withania [9]. The number of analytical reports for the determination of withanolides is comparatively small. Besides a TLC method for the quantification of withaferin A [10], a few HPLC methods are described in literature. Most of them showed disadvantages, as either the acetylation of withaferin-A is required prior to analysis [11] the separation time is long [12] or the compounds are not baseline separated and elute, more or less with the injection peak [13].

A part of our efforts, was to develop a HPLC method suitable for direct determination of withaferin-A in W. coagulans and W. somnifera, and to investigate the distribution of this compound in different plant parts.

Authenticated Withania coagulans and Withania somnifera plant materials were collected from Narsapur forest, Medak Dist., Andhra Pradesh, and botanically identified. The plants were shade dried, and leaves and the roots of both the species, were used for HPLC analysis. Standard withaferin-A was procured from the Regional Research Laboratory, Jammu Tawi.

One milligram of standard withaferin-A, was dissolved in 5 ml of alcohol. Three additional calibration levels were prepared by diluting this solution with alcohol, to obtain 0.005%, 0.01%, 0.015% and 0.02% concentrations, for studying the linearity. The precision of the method was also studied, by injecting a sample solution of concentration 0.02% five times, and finding out the standard deviation and coefficient of variation.

Table 2: Determination of standard deviation and coefficient of variation for standard withaferin-A 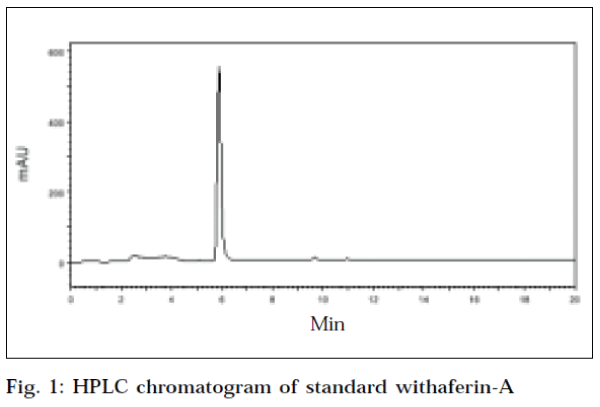 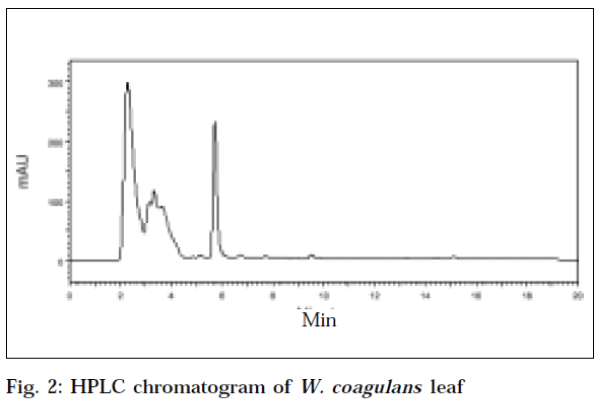 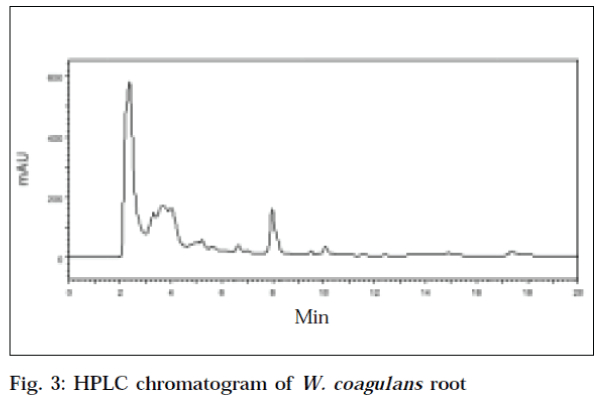 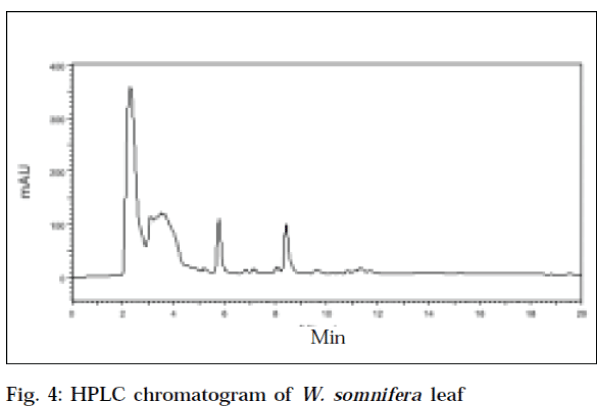 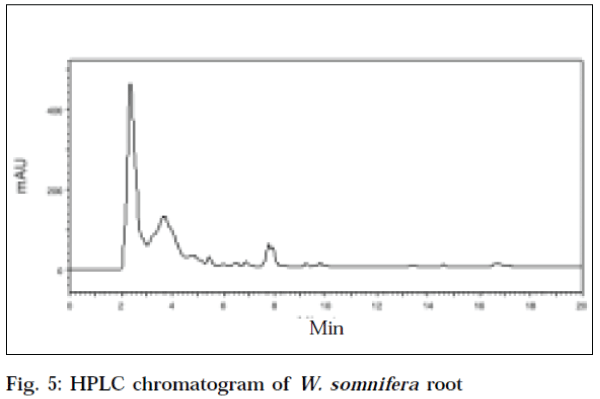 The proposed method can be used to standardize Withania species on the basis of withaferin-A as a marker compound, and is helpful for scientific as well as commercial applications.