Cancer is the main causes of morbidity throughout the world[1-2]. Among the different cancers, breast cancer is the second most important cause of cancer death. Though significant progress has been made in breast cancer treatment, only a few patients benefit from breast cancer by adjuvant chemotherapy and most patients with metastatic cancer are resistant to chemotherapy[3]. In addition, chemotherapy causes acute and chronic toxicities that include sterility, congestive heart failure, osteoporosis and neuropathy[4]. Recently, many new avenues of cancer treatment have opened up but the costs of treatment have sky-rocketed too. Hence, screening of indigenously available plant and animal resources for anticarcinogenic potential is an important branch of anticancer research. Chili peppers are the regularly consumed naturally occurring spices worldwide[5-6]. Capsaicin, (8-methyl-N-vanillyl-6- nonenamide, figure 1a) is the main constituent of chili peppers with therapeutic activity[7]. The chemical formula of capsaicin is C18H27NO3 and the molecular weight is 305.4 g/mol[8]. Capsaicin is a hydrophobic, colourless, pungent and volatile crystalline powder. It has a benzene ring and a polar amide group with a long hydrophobic carbon tail. Due to its water insolubility, alcohols and organic solvents are used to dissolve capsaicin. 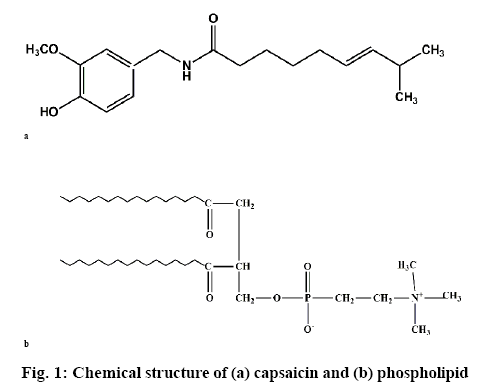 Figure 1: Chemical structure of (a) capsaicin and (b) phospholipid

In spite of its proven anticancer activity, the clinical utilization of capsaicin is limited due to its short half-life and rapid first-pass metabolism[15]. It is hughly irritating to skin and mucosa, causing a burning sensation, even in low concentrations[16]. The pungency of capsaicin may increase salivation and gastrointestinal disorders when administered orally[17]. Tyagi et al. developed capsaicinloaded liposomes and thermosensitive hydrogel for intravesical therapy of detrusor hyperreflexia[18]. It was observed that capsaicin-loaded liposomes completely blocked micturition reflexes. However, hydrogel loaded with capsaicin did not totally block the micturition reflex but it extensively diminished the frequency of bladder contraction. In another study, capsaicin was complexed with hydroxypropyl-betacyclodextrin and incorporated into the hydrogel to improve the solubility and percutaneous absorption[19]. It was observed that the complexing agent enhanced the solubility and percutaneous permeation of capsaicin. Though there have been some attempts to improve the solubility and bioavailability of capsaicin[20,21], it is yet to be developed in a standard anticancer dosage form. Recently, phospholipid complex plays an important role in the delivery of drug and it enhances the solubility and bioavailability of drug[22]. The major component of the biological membrane is phospholipid (figure 1b) and composed of a hydrophobic tail and hydrophilic head[23]. It enters the cytoplasm without lipid bilayers disruption and enhances oral drug absorption[24]. Soybean phospholipids are extensively used for the phospholipid complex preparation[25]. In the present study, the development of a capsaicin-loaded phospholipid complex and evaluation of cytotoxicity on human breast cancer cells is reported.

Phospholipids complex were prepared by refluxing followed by evaporation of the solvent. The required quantity of capsaicin was taken in a beaker containing 10 ml ethanol to dissolve it. A measured quantity of phospholipids was taken in another beaker containing 20 ml ethanol and stirred to solubilize the phospholipids. Then the capsaicin solution was poured into the phospholipids solution with stirring at 50° for 2 h and the solvent was removed. The resultant mixture was put into a vacuum desiccator for 24 h to get a complete dry substance. The dried product was stored in a desiccator for further use.

XRD studies of capsaicin, capsaicin and phospholipids physical mixture (1:2) and 1:2 complexes of capsaicin and phospholipids were carried out using XRD (Smart Lab, Rigaku, Japan). The tube voltage and current were set at 45 kV and 200 mA, respectively. The sample was placed in an aluminium sample holder and scan between 5-80° in 2θ with a 0.04°/min step size with a scan speed of 5°/min[28].

The solubility of capsaicin was determined in a volumetric flux by adding an excess amount of capsaicin to 10 ml of water and sonicated for 1 h. Then, the mixture was shaken for 24 h (BOD Shaker, India) at 37±0.5° and centrifuged at 15 000 rpm for 15 min. The supernatant was filtered through a Whatman number 1 filter paper and absorbance was measured at 279 nm by UV/Vis spectrophotometer (UV 1800, Shimadzu, Japan) to determine the solubility of capsaicin in the solute. Each experiment was performed 3 times.

The release of a drug was performed in a beaker containing release media, pH 1.2 KCl/HCl buffer for 2 h and pH 7.4 phosphate buffer for the remaining time, kept on a magnetic stirrer with 300 rpm rotation at 37°. A known amount of sample was taken in a dialysis bag (Himedia, Mumbai, India) and the bag ends were bound with the thread. Then the dialysis bag was dipped into the buffer solution. The samples were withdrawn at a fixed time interval with replacement of the buffer solution. The solutions were filtered through a Whatman number 1 filter paper and drug content was determined by UV/Vis spectrophotometer at 279 nm with the respective buffer solution as a blank. The mean dissolution time (MDT) was determined to understand the formulations dissolution performance. MDT was calculated using the following Eqn.[29], MDT =Σnj=1 t’’jΔMi/Σnj=1 ΔMi, where n is the number of sample times, j is the sample number, t’’ is the time at the midpoint between tj and tj-1 and ΔMi is the drug dissolved between ti and ti-1.

The cytotoxic effect of capsaicin-loaded phospholipid complex was determined through [3-(4,5-dimethylthiazol-2-yl)-2,5-diphenyltetrazolium bromide (MTT) assay where viable cell’s reducing enzymes convert MTT to formazan crystals. The cytotoxicity was performed using MCF-7 and MDA-MB-231 breast cancer cell lines using MTT assay for assessing cell metabolic activity. Roswell Park Memorial Institute medium (RPMI 1640) and Dulbecco’s modified Eagle medium were used to culture MDA-MB-231and MCF-7cells, respectively. Five percent fetal bovine serum and 1 % antibiotic were added to both media. All reagents were purchased from Himedia (Mumbai, India). The cells were incubated in 5 % CO2 and humidified atmosphere at 37°. MDA-MB-231 and MCF-7 cells were seeded in a two different 96-well culture plate and incubated for overnight. Four different doses (100, 150, 225, and 300 μM) were selected for the treatment of cells with a drug, blank formulation and drug-loaded formulation in 150 μl complete media for 24 h. After incubation at 37° for 24 h, each well was added with 50 μl of MTT reagent (5 mg/ml). Then the cells were incubated at 37° for another 4 h. After removal of the MTT solution, the formazan crystals (purple) produced at the wells were solubilized using 150 μl DMSO with shaking for 30 s. Then, the absorbance was recorded at 570 and 650 nm by Spectramax (Molecular Devices, USA). The following Eqn. was used to determine the cell viability, cell viability (%) = (T/C)×100, where T is the optical density of the treated cells and C is the optical density of control cells.

Development of a novel drug delivery system using natural resources is essential due to the advantage of an herbal drug for the treatment of different diseases. In the phospholipid complex, it was speculated that capsaicin’s nonpolar functional group forming quasistable bonding with phospholipid and consequently hydrophobic moiety was masked[30]. The phospholipid is a vital constituent of cell membranes and promotes drug transport from the gastrointestinal (hydrophilic) milieu to the intestinal cell membrane (lipophilic) and finally into the blood[31]. In the present experiment, a capsaicin phospholipid complex was prepared by a simple and reproducible method.

DSC is a technique for the thermal analysis of a broad diversity of materials. Changes in material properties with changes in the temperature can give valuable information about the drug-excipient interactions and new entities formation. Figure 3 showed differential scanning thermograms of the capsaicin, physical mixture of capsaicin and phospholipids, and complex of capsaicin and phospholipids. Pure capsaicin (figure 3a) showed a sharp endothermic (melting) peak at 66°, representing capsaicin crystalline nature. Similar melting endotherm was observed by another author[38]. The thermogram of the physical mixture (figure 3b) exhibited peaks at 65°, slightly lower than pure capsaicin. It was shown that an increase in temperature might cause melting of individual constituents and form aggregates of capsaicin and phospholipids whose melting point is lower than capsaicin[39]. Thermograms of the complex (figure 3c) showed two new peaks at 31° and 58°, which is different from the capsaicin peak. There is a complex formation through weak intermolecular interaction (hydrogen bonding, van der Waals interactions) between capsaicin and phospholipid. These interactions possibly allow the fatty acid chains of the phospholipid molecule to rotate freely and surround the capsaicin molecule, thus dispersing the capsaicin molecule into the phospholipid molecule at a molecular level. Such complex formation might contribute to an enhancement in the dissolution profile of capsaicin. In another study, naringenin showed melting endothermic peak at 253° and complex showed two new peaks at 51° and 62°[40]. They concluded that naringenin complex with phospholipids through hydrogen bonding and hydrophobic interaction. In the present study, the –OH groups of the capsaicin phenol rings might be involved in hydrogen bonding while the aromatic rings could be involved in hydrophobic interaction. These DSC data are supported by the outcome of the DSC profile of the phospholipid complexes prepared by other authors[41,42]. 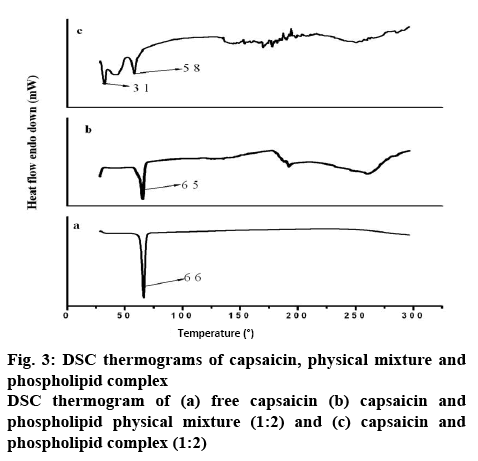 XRD study was carried to check the crystalline properties of the drug in the formulation[43]. X-ray powder diffraction of capsaicin, physical mixture, and complex was shown in figure 4. Capsaicin exhibited intense diffraction peaks (figure 4a) at 2θ = 5.8° (258226), 11.7° (35705), 16.6° (32673), and 19.9° (21480) representing the crystalline properties of a drug. Similarly, diffraction peaks of capsaicin at 5.8°, 11.7°, 16.4°, and 19.8° were observed by other authors[38]. The diffractogram of the physical mixture showed diffraction peaks (figure 4b) at 2θ = 5.8° (8352), 11.7° (8352), 16.6° (10361), and 19.9° (13130) representing reduced capsaicin peak. Moreover, the diffraction peak at 19.9° (13130) was wider and this may be the combined peak of capsaicin and phospholipid. The broad peak of phospholipid around 2θ=20.1° was observed by other authors[44]. This decrease might be due to the lesser amount of capsaicin in the mixture or formation of aggregates between capsaicin and phospholipid[45]. The diffractogram of the complex showed peaks (figure 4c) at 2θ = 5.8° (8121), 11.7° (7184), 16.6° (8014), and 19.9° (9455) representing more reduced capsaicin peak compared to the physical mixture. This indicated that the crystallinity of drug in the complex was decreased and that most of the drugs existed in an amorphous form with a minority in the crystalline state. The preparation of complex with reduced crystallinity might facilitate the dissolution process, which was desirable mainly due capsaicin have low solubility in aqueous media. Similar results were obtained by earlier studies with diclofenac phospholipid complexes[46]. 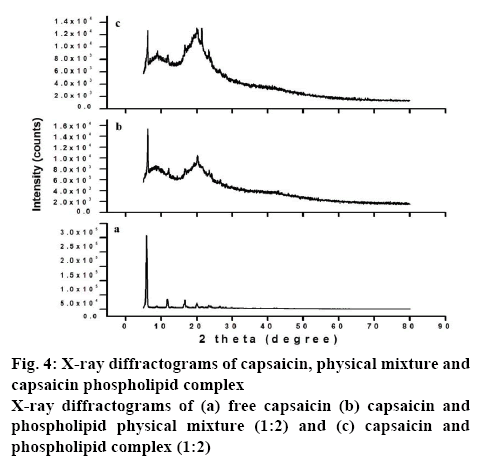 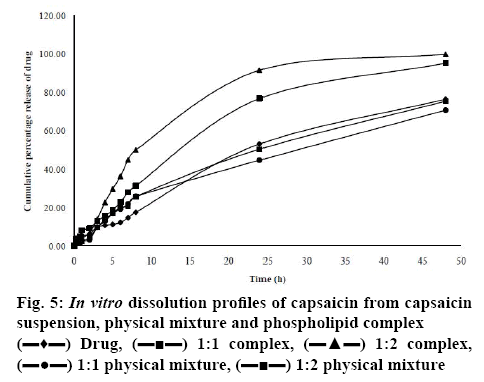 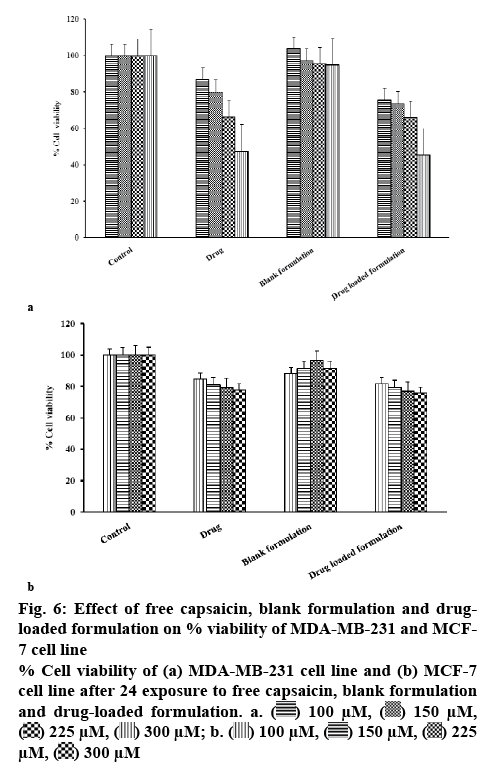