In the present investigation, a novel multifunctional co-processed superdisintegrants consisting of crospovidone and Kyron T-314 were fabricated by solvent evaporation method to develop melt-in-mouth tablets of metoclopramide hydrochloride with a view to enhance patient compliance by direct compression method. The simple physical blends and co-processed mixture of superdisintegrants were characterized for angle of repose, bulk density, tapped density, Carr's index, Hausner's ratio and compatibility studies by FTIR spectroscopy. Melt-in-mouth tablets of metoclopramide hydrochloride were prepared using the physical blends and co-processed mixture of superdisinterants and were evaluated for hardness, friability, in vitro disintegration time, in vitro dispersion time, wetting time, water absorption ratio, drug content, in vitro drug release and accelerated stability study at 40±2° temperature and 75±5% relative humidity. Among the tablets evaluated, formulation F-X prepared by adding co-processed superdisintegrants in ratio of 1:1 showed minimum in vitro dispersion time of 9.71±0.021 s, in vitro disintegration time of 5.70±0.117 s and higher amount of drug release of 99.695±0.29% at the end of 1 min. Formulation F-X was emerged as the overall best formulation based on drug release characteristics in pH 6.8 phosphate buffer compared with the tablets obtained from conventional method of manufacture as well as with marketed preparation. Analysis of drug release data indicated that formulation F-X followed first order kinetics. This study revealed that the co-processed mixture of superdisintegrants have excellent flow properties, high compressibility, render low disintegration time to tablets and have better binding properties as compared to physical blends of superdisintegrants. These materials can be a good substitute for inert superdisintegrants, which are normally used in tablet manufacturing.

Formulation of a convenient dosage form for administration and achievement of better patient compliance are the two most important criteria in novel drug delivery system [1]. Oral route of administration is the most safer, convenient and economical to formulate solid dosage form. Tablet dosage form covers 80% of all dosage forms administered to humans and have got high popularity in terms of self-administration, manufacturing convenience, accurate dosing, pain avoidance and high stability as compared to liquid and injectable dosage forms [2,3].

Formulation of certain active pharmaceutical ingredients can not be achieved adequately with the use of single component excipient [4]. Hence, excipients with multifunctional characteristics build into them, such as better flow, a minimum tendency for segregation, high compressibility, rapid disintegration ability and low/no moisture sensitivity have gained most acceptance in current pharmaceutical formulation development studies [5]. The objective of co-processing is to provide the synergy of functionality improvement as well as to provide an excipient with multiple characteristics build into them [6]. Co-processed excipients exhibited improved functionality as compared to their physical mixtures [7]. One of the main objectives of the present study was to prepare co-processed superdisintegrants of crospovidone and Kyron T-314 which avoids the problem of segregation of individual superdisintegrants. The study was also aimed to facilitate rapid disintegration of tablets in oral cavity without need of water and subsequent dissolution of active pharmaceutical ingredient to elicit quick onset of action. The reasons for selection of crospovidone are high capillary activity, pronounced hydration capacity and little tendency to form gels. Unique porous particle morphology facilitates wicking of liquid into the pores of the tablet and makes it suitable for direct compression [8]. The reasons for selection of Kyron T-314 are very high swelling tendency of hydration either in contact with water or gastrointestinal fluids causing very fast disintegration without the lump formation. Thus coprocessing of two superdisintegrants with wicking and swelling properties leads to the rapid disintegration of tablets in contact with saliva within few seconds and also serves as a multifunctional excipient [9]. The coprocessed superdisintegrants were prepared by solvent evaporation method.

The co-processed superdisintegrants were prepared by solvent evaporation method. A blend of crospovidone and Kyron T-314 (in the ratio of 1:1, 1:2 and 2:1) was added to 10 ml of isopropyl alcohol. The contents of the beaker (250 ml capacity) were stirred on a magnetic stirrer. The temperature was maintained between 65° to 70°, and stirring was continued till most of isopropyl alcohol evaporated. The wet coherent mass was granulated through #60-sieve. The wet granules were dried in a hot air oven at 60° for 20 min. The dried granules were sifted on #60-sieve and stored in air tight container till further use [10]. The prepared mixture was evaluated for flow properties and polymer-polymer compatibility studies such as FTIR study.

Fourier Transform Infra Red (FTIR) spectral data were taken on a Shimadzu (model FTIR-8700) spectrophotometer to find out integrity and chemical stability of the superdisintegrants. FTIR spectra of the crospovidone, Kyron T-314, physical blend and co-processed mixture of superdisintegrants in ratio of 1:1 were obtained. An FTIR spectrum of drug with physical blend and co-processed mixture of superdisintegrants was also recorded. All the samples were crushed with potassium bromide to get pellets at 1 ton/cm2. Spectral scanning was done in the range between 4000-500 cm-1.

All the ingredients (except granular directly compressible excipient) were passed through #60-sieve separately. Then the ingredients were weighed and mixed in geometrical order and compressed into tablets of 100 mg using 6 mm round flat punches on a Rimek mini press 1 (Karnavati). The composition of tablet is presented in Table 2. The punches and die were lubricated with a small amount of magnesium stearate using a cotton swab preceding compression.

Table 2: Formulations Of Metoclopramide Hydrochloride Melt In Mouth Tablets For Batches From F-Vii To F Xiii

Measurement of in vitro disintegration time and dispersion time

Ten tablets were weighed and pulverized to a fine powder. A quantity of powder equivalent to 10 mg of metoclopramide hydrochloride was extracted in pH 6.8 phosphate buffer solution and the liquid was filtered through 0.22 μm whatman filter paper. After appropriate dilution of the filtered solution, the drug content was determined at 272 nm using a UV/Vis spectrophotometer (LabIndia 3000+) [14].

In vitro drug release study and comparison with marketed tablet

The tablets of the formulation F-X were subjected to accelerated stability studies by storing the tablets in plastic zip bags at 40±2° temperature and 75±5% relative humidity (RH) for 3 months. Stability study was performed in programmable environmental test chamber (REMI). Stability study was conducted as per ICH guidelines. At intervals of 1 month, the tablets were visually examined for any physical changes and evaluated for in vitro drug release studies [16]. Melt-in-mouth tablets each containing 10 mg of metoclopramide hydrochloride were prepared by direct compression method employing crospovidone, Kyron T-314, physical blend and co-processed mixture of both the superdisintegrants in different ratios (1:1, 1:2 and 2:1). Directly compressible excipients, Flocel 102 and mannitol were used as diluents to enhance mouth feel. A total of thirteen formulations were designed and evaluated including control formulation without superdisintegrants and also compared with the marketed preparation (Table 2). All the tablet formulations were evaluated for flow property and compression characteristics. The flow prpoperties were shown in Table 3. The angle of repose for blends was found to be 25-35° and Carr’s index of 5-21% indicates good flow. Hausner’s ratio in the range of 1.08-1.19 indicates good flow property. The result of flow property of formulations indicates that the blends were free flowing.

Table 3: Evaluation Of Physical Properties Of Powder Blends Of Melt In Mouth Tablets Formulations F I To F Xiii Before Direct Compression 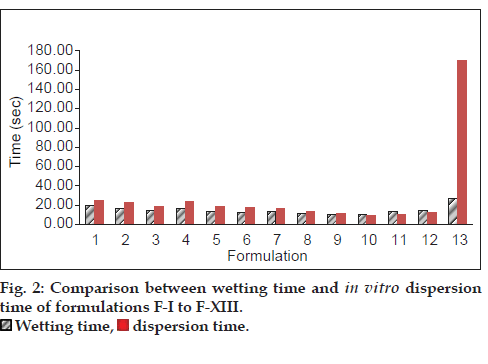 Figure 2: Comparison between wetting time and in vitro dispersion time of formulations F-I to F-XIII.

In vitro dissolution studies on all the prepared metoclopramide hydrochloride melt-in-mouth tablets were performed in pH 6.8 phosphate buffer solution. The cumulative percent drug released from formulation F-X was compared with the tablets obtained from conventional method of manufacture as well as with commercial conventional formulation (CCF) (figs. 3 and 4). In comparison to direct compression tablets containing the physical blends of crospovidone and Kyron T-314, a faster drug release was observed from the tablets made from coprocessed superdisintegrants which might be attributed to increased porosity. In order to describe the kinetics of the release process of drug in all the prepared formulations, zero-order and first-order rate equations were used. Zero-order rate equation describes the one whose rate is independent of the concentration of drug undergoing reaction, while the first-order rate equation describes the one whose rate is directly proportional to the concentration of drug undergoing reaction. It is evident from Table 6, that a linear relationship was obtained with ‘r’ (correlation coefficient) value close to unity and higher than ‘r’ value obtained from the zero-order rate equation. This indicates that the drug release process is first order in nature. Accelerated stability studies of the prepared formulations indicated that there are no significant changes in drug content and in vitro dispersion time at the end of 3 months period (P<0.05). 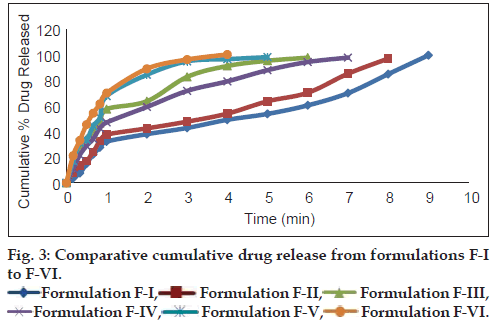 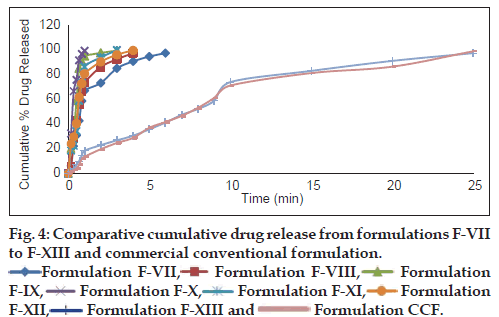 Tablets formulated using a combination of coprocessed crospovidone (A) and Kyron T-314 (B) (1:1) as superdisintegrants (formulation F-X) had shown shortest disintegration time and very fast dissolution profile. Undoubtedly, all the formulations showed very short disintegration time, apart from fulfilling all compendial and other standard specifications, and exhibited faster release rates of metoclopramide hydrochloride.