A rapid, precise, accurate, specific and simple high performance liquid chromatography method for estimation of lorcaserin hydrochloric in human plasma, using metoprolol as an internal standard, was developed and validated as per the regulatory requirements. Sample preparation included solid phase extraction and chromatographic separation was performed using a Phenomenex Luna C18 column (250×4.6 mm i.d, 5 µ particle size), with phosphate buffer (pH 3):acetonitrile:methanol (65:20:15) as the mobile phase at a flow rate of 1.0 ml/min. Wavelength of detection was 222 nm. Retention times of internal standard and lorcaserin HCl were found to be 5.15 and 7.19 min, respectively. The method was developed and tested in the linearity range of 500 to 3000 ng/ml. The method was validated for accuracy, precision, linearity, recovery and stability in compliance to international regulatory guidelines.

Lorcaserin hydrochloride (LOR) is an antiobesity (selective serotonin 2c receptor agonist), off-white to white powder, which is freely soluble in water, methanol, acetonitrile and dimethyl sulphoxide having log P value of 2.56 and pKa of 9.53. LOR is not official in IP, BP and USP and is available as 10 mg tablets.

A number of analytical methods were reported in literature to analyse LOR in tablet formulation. A liquid chromatography-electro spray ionization-tandem mass spectrometry (LC-ESI-MS/MS) [1] method was reported for in vivo and in vitro pharmacological characterization of LOR. Also a chiral LC-MS/MS method for the separation and quantitation of lorcaserin and its S-enantiomer has been reported [2]. Despite of the fact that various analytical methods are available for the estimation of lorcaserin, no solid phase extraction based bioanalytical high-performance liquid chromatography (SPE HPLC) method was available in the literature to the best of our knowledge. Thus, the main aim of the study was to develop a SPE HPLC method for the determination of LOR in plasma and its application to rat pharmacokinetic study. Metoprolol (MET) was used as internal standard (IS) for bioanalytical method development. MET is an antihypertensive agent and having solubility in water and official in IP, BP and USP having log P value of 1.88 and pKa of 9.67.

About 10 mM phosphate buffer was prepared by dissolving 0.136 g of potassium dihydrogen orthophosphate in sufficient water to produce 100 ml. The pH was adjusted to 3 using orthophosphoric acid. This buffer was filtered through 0.22 μ membrane filter and stored at ambient temperature.

Appropriate aliquots of LOR stock solution were taken in different 6 ml volumetric flasks and diluted up to the mark with mobile phase to obtain final concentrations of 10-60 μl/ml. To appropriate aliquots of calibration standards, 0.1 ml of 400 ppm IS was spiked and the final volume of 2 ml was made up with plasma to obtain final concentration of 500-3000 ng/ml. The linearity range was selected on the basis of reported peak plasma concentration (Cmax= 789 ng/ml) from literature.

Also trials for selection of appropriate IS were taken in which screening was done on the basis of structural resemblance, log P value, pKa value and availability. Chromatographic trials for bisoprolol fumarate and MET succinate were undertaken with conditions described earlier in which MET succinate gave good peak as shown in Table 1. 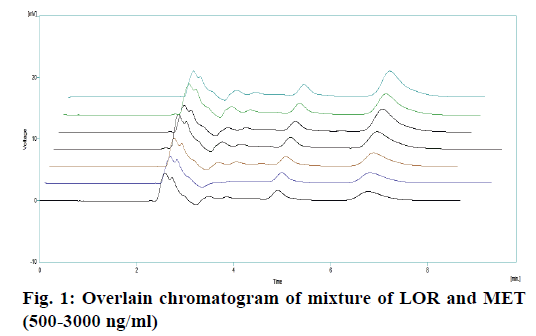 Table 3: Back Calculated Concentrations for the standard Calibration Graphs

Bench top stability was performed at MQC level. Three replicates of MQC were withdrawn from deep freezer and were kept at room temperature for 12 h. These samples were preferred as stability samples after 12 h, prepared fresh samples of MQC concentrations of LOR in three replicates. These samples were referred as fresh or comparison samples. The freeze and thaw stability of analyte was determined after three freeze thaw (FT) cycles. The three sets of MQC samples were stored at –70±5 and subjected to three FT cycles at interval of 24 h. After the completion of three cycles of 12 to 24 h, the samples were analysed. Stability of samples was compared against freshly prepared samples.

Table 4: Summary of Stability Studies for LOR And MET

The pharmacokinetic study was carried out in male Sprague Dawley rats. The six healthy animals were selected for the study. The animals were fasted overnight (~14 h) and had free access to water throughout the experimental period. LOR was administered by oral gavage at a dose of 10 mg/kg, as solution of drug in water. Blood samples (0.5 ml) were collected from the retro orbital plexus sinus at designated time points (0.25, 0.5, 1, 2, 3 and 4 h) into micro centrifuge tubes containing 100 μl of heparin. Plasma was harvested by centrifuging the blood using cold centrifuge compufuge at 3000 rpm for 10 min. Plasma (300 μl) samples were spiked with IS and processed same as standards as described above.

Sample preparation technique used for the study plays a significant role with respect to bionalytical samples [15-20]. It is essential to reduce the effect of the biological and buffer matrix. Sample preparation is applied to remove interfering compounds. As a bonus, analytes can be concentrated during the extraction processes. Sample preparation procedure is tedious and time consuming. However, the cleanliness of the samples affects the overall performance of the analysis. Different extraction techniques tried were protein precipitation, liquid-liquid extraction and SPE. For selection and optimization of particular extraction techniques various trials were taken as described below. Initially protein precipitation method was tried using acetonitrile, methanol and acetone as precipitating agents but it showed greater plasma interference, greater sample transfer and greater sample evaporation steps. Samples obtained were unclean, which can be harmful to life of analytical instrument in long run. So this technique was not preferred. Following it liquid-liquid extraction technique was tried in which interference due to plasma matrix was reduced. However for sample transfer and sample evaporation, tedious multiple extraction steps were involved, which produced less consistent results. Various extracting agents used for the study included chloroform, ethyl acetate and methyl tertbutyl ether (MTBE). Best recovery of about 70-75 % was obtained with MTBE. Finally SPE technique was tried in which interference due to plasma matrix was very less as compared to other techniques. In it, sample transfer and sample evaporation steps are not involved, leading to consistent results. In addition this technique required less biological material and less time. The C18 cartridges were used for the extraction procedure. Two brands of C18 cartridges were tried for the study. The brands of C18 cartridges used were Oasis of Waters and Orochem. Best recovery of 89 % was obtained by using Orochem brand C18 SPE cartridge.

The extracted samples were retrieved from pre-labelled sample tubes stored in deep freezer at –20° and were pre-treated prior to extraction and then subjected to SPE. The extracted samples were subjected to HPLC. For development of analytical method for the estimation of LOR by RP HPLC, various chromatographic trials were taken. The various factors considered were flow rate, mobile phase composition, wavelength maxima and pH of mobile phase. The factors were varied on one factor at time basis [21-26]. In the HPLC method optimized on extracted samples, mobile phase consisted of phosphate buffer:methanol:acetonitrile (65:15:2, pH 3.0), at 1 ml/min flow rate, which gave two sharp, well-resolved peaks with minimum tailing factor for LOR and MET in human plasma as shown in Figure 2A. The retention times for LOR and MET were 7.19 and 5.14 min, respectively. UV overlain spectra of both LOR and MET showed that both drugs absorbed appreciably at 222 nm, so this wavelength was selected as the detection wavelength. The calibration curve for LOR was found to be linear over the range of 500- 3000 ng/ml (Figure 1). The data of regression analysis of the calibration curves is shown in Table 3. The proposed method was successfully applied to the determination of LOR in biological matrix. The developed method was also found to be specific, since it was able to separate drug in the biological matrix.

The chromatogram presented in Figure 2B is of blank (unspiked) rat plasma sample extracted using SPE extraction procedure as optimized below. The chromatogram depicted in Figure 2C showed some small peaks, well separated from the drug peak, but in absence of standard metabolite or any definite chromatographic pattern, it was difficult to identify the metabolite peak. All these peaks did not interfere with the drug analysis. Figure 3 depicted the changes in drug concentrations at various designated time points (0, 30, 60, 120, 180, 240, 300 min). The pharmacokinetic parameters were calculated with a non-compartmental model using Thermo Kinetica PK/PD analysis software (version 5.0 Thermo Fisher Scientific). The peak plasma concentration (Cmax) and the corresponding time (Tmax) were directly obtained from the raw data. The other pharmacokinetic parameters were obtained using non compartment model. AUCtotal was calculated using mixed log linear model. The pharmacokinetic data is presented in Table 5 [27-29]. 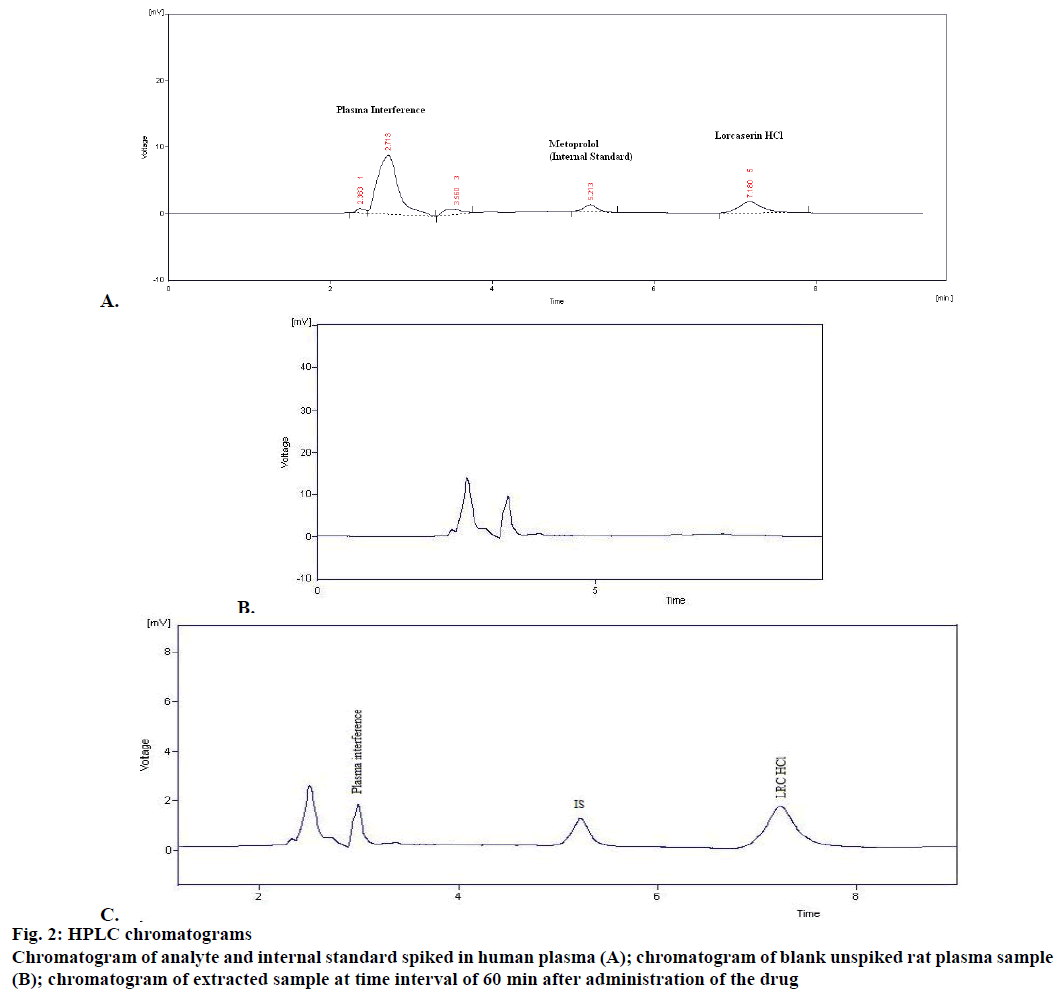 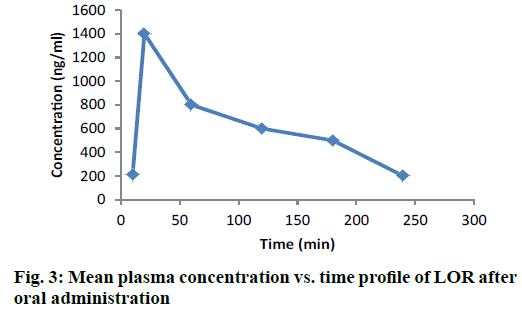 From the results and discussions, it could be concluded that the method developed for the analysis of LOR in rat plasma is specific, accurate, precise and reproducible. The use of this method could enable the characterization of LOR and its pharmacokinetics after single oral dose without any interference from the metabolite. According to pharmacology and toxicology review by CDER, based on plasma profiles, overall pattern of metabolism in humans is most closely approximated the metabolite pattern seen in rats [30,31]. The assay can therefore be easily extended to quantitate LOR in plasma for routine monitoring of plasma levels of LOR in laboratories.