The present study is concerned with the development and validation of a bioanalytical method for estimation of rivaroxaban in human plasma using high performance thin layer chromatography. The chromatographic separation was achieved on pre-coated silica gel 60F254 thin layer chromatography plate using toluene:ethylacetate:methanol (6:3:1, % v/v/v) as a mobile phase. Detection was carried out at 284 nm. A compact spot was obtained with an Rf value of 0.44±0.02. The linearity was found over the concentration range of 25-125 ng/band in human plasma. The relative standard deviation for repeatability of sample application and sample measurement was 0.60 and 1.65 %, respectively. The relative standard deviation for intraday and interday precisions was in the range of 1.37 to 1.85 % and 1.03 to 2.77 %, respectively. The limit of quantitation was 8.00 ng/band and the limit of detection was 2.64 ng/band. Percent recovery of rivaroxaban was in the range of 66.95-69.03%. This method was applied to a pharmacokinetic study of rivaroxaban. The Cmax and tmax for test and marketed formulation were found to be 63.83 and 47.3 ng/ml and 3 and 4 h respectively. The area under the curve0-t for test and marketed formulation were found to be 290 and 219.0 ng/ml.h, respectively. The t1/2 for test and marketed formulation was found to be 6.87 and 6.64 h.

Rivaroxaban, 5-chloro-N-[[(5S)-2-oxo-3-[4- (3-oxomorpholin-4-yl)phenyl]-1,3oxazolidin-5-yl] methyl]thiophene-2-carboxamide (fig. 1), is the first orally bioavailable oxazolidinone derivative and direct inhibitor of the coagulation factor Xa with anticoagulant activity, which has been available for prophylaxis and treatment of deep vein thrombosis[1-3]. Researchers have developed various analytical methods for estimation of rivaroxaban in its pharmaceutical dosage forms, which included high performance liquid chromatography, ultra-performance liquid chromatographic method and liquid chromatography-mass spectrometry (LC-MS)[4-18]. Unlike high-performance thin-layer chromatography (HPTLC), the above reported methods are complex, time consuming and expensive techniques for estimation of drugs in biological samples. Therefore, this paper aimed to develop bioanalytical method for estimation of rivaroxaban in human plasma and to apply this method in a pharmacokinetic study. 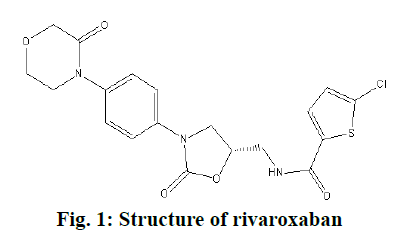 Standard stock solution was prepared by dissolving 10 mg of rivaroxaban in acetonitrile and making it up to 10 ml with the same. Further dilutions were made to prepare 50 and 100 μg/ml solutions with the same solvent.

Extraction of rivaroxaban from plasma:

Five hundred microlitres of plasma was transferred into a centrifuge tube and spiked with fixed aliquots of working standard solution of rivaroxaban and vortexed, 3 ml of acetonitrile was added and sonicated for 10 min. The above solution was centrifuged for 15 min at 1000 rpm. The supernatant was transferred to a 5-ml volumetric flask volume made up with acetonitrile and filtered through a 0.22 μm syringe filter.

Aliquot 100, 200, 300, 400, and 500 μl of the working standard solution (50 μg/ml) of rivaroxaban were spiked with 500 μl ml of drug free plasma. Spiked plasma samples were extracted using extraction method as described above. Twenty five microlitres of the sample was spotted on a TLC plate and the plate was developed using the chromatographic conditions described above.

The developed bioanalytical method was validated in terms of specificity, linearity, precision, accuracy, limit of detection and limit of quantification. Specificity of the method was ascertained by analysing the standard sample and rivaroxaban extracted from plasma. The spot of rivaroxaban extracted from plasma was confirmed by comparing its Rf and UV spectra of the spot with standard rivaroxaban. The peak purity of both the spots was assessed by comparing the spectra acquired at three different positions on the band, i.e. at peak start (s), peak apex (m) and peak end (e). Linearity for rivaroxaban in plasma was ascertained from regression coefficient by plotting graph of peak area versus respective concentration (n=5) by analyzing solutions corresponding to 25 to 125 ng/band. Method precision was ascertained by performing repeatability of measurement, repeatability of sample application and intra-day and inter-day precisions. The accuracy of the method was determined in terms of the extraction efficiency of the method by comparing the area of rivaroxaban extracted from plasma and rivaroxaban standard. The limit of detection and limit of quantitation of the developed method were calculated from the standard deviation of the intercepts and mean slope of the calibration curves of rivaroxaban using the formula LOD = 3σ/S and LOQ = 10σ/S, where, σ is the standard deviation of the intercepts of 5 calibration curves and S is the mean slope of 5 calibration curve.

Healthy, Adult Wistar female rats (200–230 g) were obtained from the Central Animal House, Maliba Pharmacy College. The animals were housed at temperature 27±2º, humidity 55 %, 12-h light/12-h dark cycle and had free access to food and drinking water up to the time of experimentation in normal acrylic cages. The animals were acclimatized to the laboratory environment 1 week before the experiment. The experiments protocol described in the present study was approved by the Institutional Animal Ethics Committee (IAEC, Protocol No. MPC/IAEC/06 /2018) and conducted according to the Committee for the Purpose of Control and Supervision of Experiments on Animals (CPCSEA) guidelines. Five tablets of Xeralto of the strength 10 mg were crushed and 8 ml of 1% CMC was added to prepare a suspension. The prepared suspension was administered to rats by oral route.

Blood collection and preparation of plasma sample for Pharmacokinetic studies:

After administration of rivaroxaban to the rats, blood was collected by retro-orbital technique at 0, 1, 2, 3, 4, 5, 6, 12 and 24 h time intervals. One ml of blood was drawn into vacutainer tubes containing 1.8 mg of EDTA. The vacutainer tubes were inverted 10 times to mix blood and the anticoagulant, centrifuged at 2000 to 3000 rpm for 15 min and the supernatant was separated. Protein precipitation technique was used to prepare plasma sample for analysis. Aliquots of 0.5 ml was taken from plasma samples collected at 0, 1, 2, 3, 4, 5, 6, 12 and 24 h. To this, 3ml of acetonitrile was added and vortexed, the sample was sonicated for 10 min and centrifuged for 15 min at 1000 rpm. Supernatant was transferred to a 5-ml volumetric flask diluted to the mark with acetonitrile, filtered through a 0.22 μl syringe filter and 25 μl of the filtrate was applied to the TLC plate.

Numerous initial trials were carried out with toluene, methanol, ethyl acetate, chloroform and modifiers glacial acetic acid and triethylamine to determine their effect on drug migration. After these trials, various combinations of solvents, toluene:methanol:triethylamine, chloroform:methanol:glacial acetic acid, toluene:methanol, toluene:ethyl acetate:methanol were tried in various proportions. Better results were obtained in toluene:ethyl acetate:methanol in the ratio of 6:3:1, where sharp peak was observed with an Rf of 0.44.

Comparison of chromatograms of standard rivaroxaban and rivaroxaban from plasma showed identical Rf values of 0.44±0.02. (fig. 2). Chromatogram of blank plasma was run to check any interference. Comparison of the spectra scanned at s, m and e positions of individual bands showed a high degree of correlation (>0.9994), which confirmed purity of the corresponding bands.

Calibration curve of rivaroxaban from plasma was obtained by plotting peak area versus concentration over the range of 25 to 125 ng/band. The calibration curve was found to be linear with a correlation coefficient of 0.9954. 3D chromatogram is shown in fig. 3. Calibration data is shown in Table 1. RSD for repeatability of measurement and repeatability of sample application was found to be 0.60 and 1.65 %, respectively, which ensured precision of spotter device. RSD for intra-day and inter-day precision was found in the range of 1.37-1.85 and 1.03-2.77 %, respectively. These results indicated that the method is reproducible and could be used for estimating rivaroxaban in plasma. 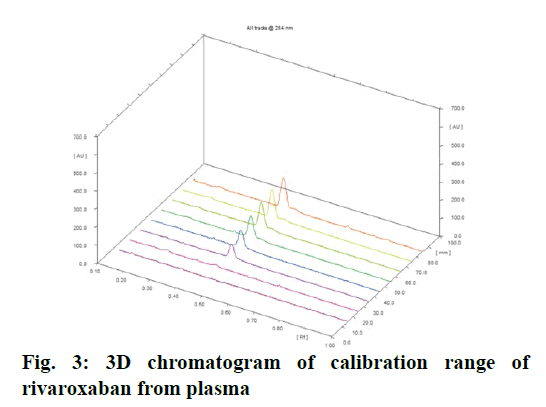 Figure 3: 3D chromatogram of calibration range of rivaroxaban from plasma

The minimum detectable concentration in terms of LOD and the minimum quantifiable concentration in terms of LOQ were found to be 2.64 and 8.00 ng/band, respectively, which indicated good sensitivity of the method. The accuracy of the method in terms of extraction efficiency was determined for rivaroxaban from plasma and % recovery was found to be in the range of 66.95 to 69.03 % (Table 2). Robustness of the method was determined by changing mobile phase composition, mobile phase volume, saturation time, wavelength and scanning speed. The % RSD was found in the range of 1.32-1.67, which ensured robustness of the method (Table 3). The overall validation summary is given in Table 4.

Pharmacokinetic studies of the test (solid dispersion based tablet) and a marketed formulation (Xarelto tablet) were conducted in female Wistar rats after oral administration and sampling was done via retroorbital vein. The plasma concentration was calculated for samples collected at different time intervals using above obtained regression line Eqn.. Data for pharmacokinetic study is depicted in Tables 5 and 6, which was calculated through PK solver (excel add in). Comparison of plasma concentration versus time profile of test and marketed formulation is shown in fig. 4. The values of t1/2 for test and marketed formulation was found to be 6.87 and 6.64 h, respectively, which showed no significant difference between the t1/2 values suggesting similar time for elimination of rivaroxaban from both the formulations. 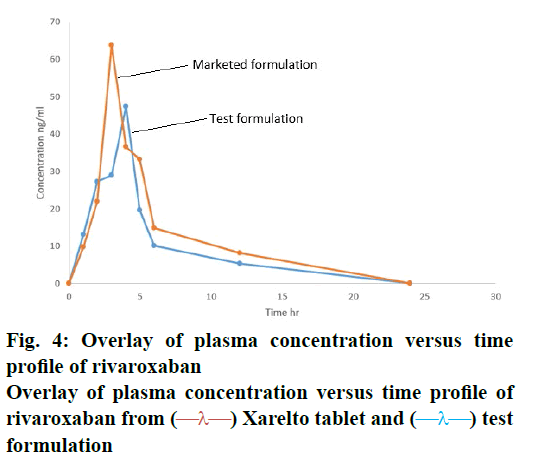 The authors thank Symed Labs limited, Hyderabad, India for providing rivaroxaban as a gift sample and Maliba Pharmacy College for providing the required facilities to carry out this research work.