Development and validation of a hptlc method for simultaneous estimation of L-glutamic acid and ?-aminobutyric acid in mice brain

A new robust, simple and economic high performance thin layer chromatographic method was developed for simultaneous estimation of L-glutamic acid and g-amino butyric acid in brain homogenate. The high performance thin layer chromatographic separation of these amino acid was achieved using n-butanol:glacial acetic acid:water (22:3:5 v/v/v) as mobile phase and ninhydrin as a derivatising agent. Quantitation of the method was achieved by densitometric method at 550 nm over the concentration range of 10-100 ng/spot. This method showed good separation of amino acids in the brain homogenate with Rf value of L-glutamic acid and g-amino butyric acid as 21.67±0.58 and 33.67±0.58, respectively. The limit of detection and limit of quantification for L-glutamic acid was found to be 10 and 20 ng and for g-amino butyric acid it was 4 and 10 ng, respectively. The method was also validated in terms of accuracy, precision and repeatability. The developed method was found to be precise and accurate with good reproducibility and shows promising applicability for studying pathological status of disease and therapeutic significance of drug treatment.

Central nervous system (CNS) operates via keeping a fine balance between both excitatory and inhibitory neurotransmission [1]. g-Aminobutyric acid (GABA) works as major inhibitory neurotransmitter and it is now very much clear that at least 40% of the inhibitory synaptic processing in the mammalian brain uses GABA as their neurotransmitter [2]. Dsyfunctioning of GABAergic system is known to be associated with various disorders such as epilepsy, anxiety, Parkinson’s disease and Huntington’s disease [1]. Glutamate is the principle excitatory neurotransmitter in the brain, which is involved in cognitive functions, neurotrophic activity and synaptic plasticity (both LTP and LTD) [3]. Glutamate by activating on NMDA, AMPA, Kainate or on mGluR1 receptors may contribute to acute brain damage after status epilepticus, cerebral ischemia or traumatic brain injury. It may also contribute to chronic neurodegeneration such as amyotrophic lateral sclerosis and Huntington’s disease [4]. Therefore, simultaneous and precise quantification of these amino acids in biological samples is essential to study the pathological status of the disease and to investigate the possible therapeutic involvement of these amino acids.

Different analytical techniques such as highperformance liquid chromatography (HPLC) [5], gas chromatography (GC) [6], fluorimetry [7] and capillary electrophoresis [8] have been used for the estimation of GABA in biological samples. Similarly, variety of analytical methods such as UV [9], HPLC [10] and microdialysis technique [11] were used for estimation of L-glutamic acid in biological samples. The experimental procedure, volume and complexity of biological samples for the abovementioned technique make these procedures very tedious. Therefore, there is a continuous demand for new analytical methods, which are simple, feasible, rapid, reproducible, precise and cost effective [1]. The current study presents a simple, precise and cost effective method for simultaneous determination of GABA and L-glutamic acid in biological samples with the help of high performance thin layer chromatography (HPTLC) technique.

Adult male Swiss albino mice (20-25 g) were procured from Haffkins Institute, Mumbai, India and were acclimatised in the animal house of the Institute of Chemical Technology, Mumbai. Young healthy mice were grouped, housed and maintained at 23±2° under 12:12 h light/dark cycle with free access to rodent chow and tap water. The animal study was approved by the Institutional Animal Ethics Committee (ICT/IAEC/2010/PH35).

Two hundred milligram of ninhydrin was dissolved in small amount of acetone. One millitre of pyridine was added to this solution and volume was made up to 100 ml with acetone [3].

Mice were fasted overnight and euthanised, the brain was removed and washed with cold 0.9% saline to remove adhering tissues and blood clots. The brain tissues was homogeniaed with 0.1 N HCl in 80% ethanol (for every 100 mg tissue, 1 ml of ethanol) using a tissue homogenizer. The homogenates were centrifuged at 4500 rpm for 20 min at 25°. The clear supernatants were then transferred into microcentrifuge tubes and used for analysis.

Two microlitre each of standard solution of L-glutamic acid/GABA (5-50 μg/ml to afford 10-100 ng/spot) was applied as a band on precoated TLC plate. Spots were dried in hot air oven at 60- 65° for 2 min. The plate was developed using the mobile phase. After the solvent reached the top of the plate (80 mm), the plate was removed and dried at 60-65° for 4-5 min in hot air oven. Then the plate was sprayed with 0.2% ninhydrin and placed in oven at 60-70° for 4-5 min. The spots were scanned at 550 nm using Camag, Switzerland, scanner and were analysed using winCATS planer chromatograph. The calibration curve was plotted using applied concentration versus areas [12].

Sensitivity of the method was determined with respect to limit of detection (LOD) and limit of quantification (LOQ) from calibration curve. The LOD and LOQ were determined at a signal-to-noise ratio of 3:1 and 10:1, respectively [13-15]..

Repeatability of measurement of peak area was determined by analysing different amount of mixture of L-glutamic acid and GABA samples covering low, medium and higher concentration ranges of the calibration curve three times without changing the position of the plate. Repeatability of sample application was assessed by spotting mixture of L-glutamic acid and GABA covering similar range of calibration curve three times and analysing them at one time [12].

The accuracy of the method was determined by performing the recovery studies at two levels. To 100 mg of the rat brain tissue, 50 ng of L-glutamic acid and 50 ng of GABA were added and the percent recovery was evaluated as a parameter to study the efficiency of the method [3].

Application of the developed method

The developed method was used to analyse the L-glutamic acid and GABA levels in pentylenetetrazole (PTZ)-induced kindling model of epilepsy. In this, mice were divided into three groups of six animals each. Group I served as vehicle control (saline treated group), Group II served as negative control group (PTZ with saline) and Group III received diazepam (2 mg/kg). Diazepam and saline were given 30 min prior to each PTZ injection. For PTZ kindling, a subconvulsant dose of PTZ, i.e. 35 mg/kg body weight (i.p.) was injected every alternate day. The PTZ injections were administered till the animals in the negative controlled group showed adequate kindling (24th injection of PTZ, i.e. total 46 days). After the study, animals were euthanized and the brain of each animal were obtained, homogenised and analyzed for levels of L-glutamic acid and GABA using the developed method [17].

Selection of mobile phase for simultaneous estimation of L-glutamic acid and GABA was carried out on the basis of polarity and ratio of different solvents. Different ratios of mobile phase (n-butanol:glacial acetic acid:water) were evaluated. Among these, n-butanol:glacial acetic acid:water at (22:3:5 v/v/v) gave good separation of various amino acids in brain homogenate. It was also observed that chamber saturation time of 45 min at 25° and solvent migration distance of 80 mm were crucial in chromatographic separations.

Linearity of any analytical method defines its ability within a given range. The test results thus obtained are directly or through mathematical transformation, proportional to the concentration of analyte [13]. This developed method was found to be linear for L-glutamic acid and GABA in a concentration range of 10-100 ng/spot for each amino acid (figs.1 and 2). Fig. 1, displays three dimensional overlay of HPTLC densitograms of the calibration spots of L-glutamic acid and GABA at 550 nm. The regression data are reported in Table 1. 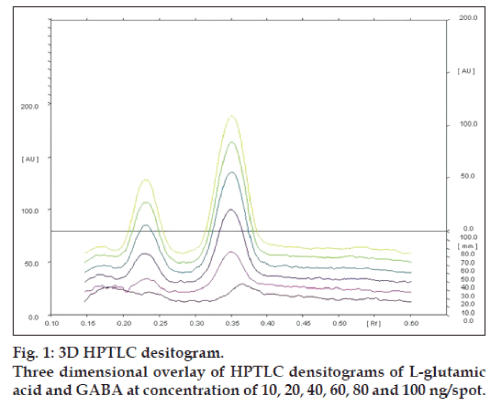 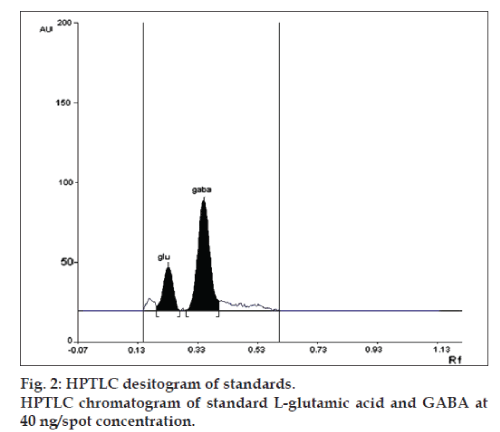 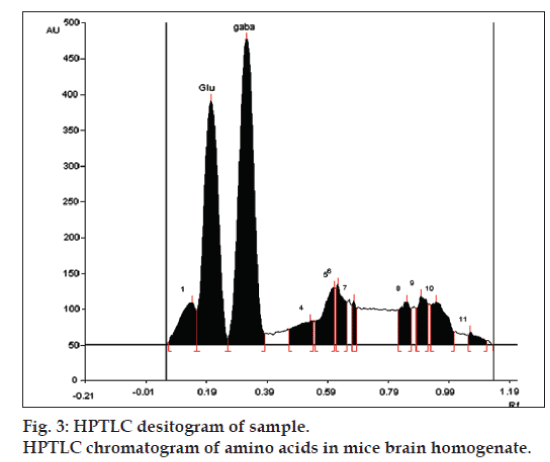 The precision of the given analytical method states the degree of dispersion between a series of measurements obtained from multiple sampling of the same homogenous sample under prescribed conditions [13,14]. Intraday precision defines the use of an analytical procedure within a laboratory over a short period of time using same operation with the same equipment, whereas interday precision involves evaluation of variations in analysis when a method is used within a laboratory on different days, by different analysts. The percent relative standard deviation (%RSD) obtained for L-glutamic acid were between 2.93-4.49 and 1.26-2.46 for intraday and interday precision, respectively. Whereas, %RSD obtained for GABA were found to be in between 1.51-3.39 and 1.71-3.83 for intraday and interday precision, respectively. In every instance, %RSD values were less than 5% confirming the precision of the method (Table 2) [15,16].

Repeatability of measurement of peak area was analysed (40, 60, 80 ng/spot) by scanning one spot without changing the position of the plate (n=3). Whereas, precision of automatic spotting device was evaluated by spotting and analysing the same amount several times (n=3). %RSD was consistently less than 5% (Table 4) ensuring the repeatability of the developed method.

Accuracy of the given analytical method can be defined as the closeness of test results to the true value [13,14]. It was determined by spiking a known amount of standard (L-glutamic acid and GABA; 50 ng each) into the preanalysed brain homogenate solution. Results of recovery method (Table 3) indicated that the average recovery of L-glutamic acid and GABA was more than 97% indicating accuracy of method.

The values are given in ng/spot, n=3. GABA= γ aminobutyric acid, SD=standard deviation

The values are given in ng/spot; Mean±SD for n=3. GABA= γ aminobutyric acid, RSD=relative standard deviation

The developed method was used for the analysis of the L-glutamic acid and GABA in brain of mice used in kindling study. The analysis showed L-glutamic acid levels were increased and the levels of GABA were decreased in mice brains compared with control animals, with the continuous treatment of the PTZ indicating the induction of the epilepsy in the animals. The increase levels of GABA and decreased levels of L-glutamic acid found in diazepam treated animals indicated the alleviation of epileptogenesis (Table 5). This study indicates the application of the developed method for estimation of the amino acids in the brain of the mice without any interference from the biological matrix. Thus the developed HPTLC method can be used in future to study altered level of neurotransmitters in various neurological disorders.

HPTLC is a sophisticated analytical instrument based on the full capabilities of thin layer chromatography. It is powerful analytical tool for obtaining chromatographic information of complex mixtures of biomolecules, organic and inorganic compounds because of its properties like automation, scanning, full optimisation, selective detection and minimum sample preparation [18]. The levels of GABA and glutamate in mice, in this method, brain (approximately 400 ng/mg of the brain tissue of each amino acid) were found to be more or less similar to that reported a normal levels in mice brain (approximately 500-1000 ng/mg of brain tissue) [19]. However, the method is sensitive up to 100 ng/mg of brain tissue of individual amino acid suggesting that this method can be helpful in determining the pathophysiological conditions of various disorders associated with altered levels of these neurotransmitters. Apart from that, the developed method provides other advantages of being simple, robust, cost effective and less time consuming for large number of sample analysis.

The authors would like to thank UGC-SAP for funding the research.