This investigation is aimed to develop and validate a high-performance thin layer chromatography method for quantitative determination of serum zonisamide levels. Chromatographic separation was carried out on a silica gel 60F254 plate using a mixture of ethyl acetate:methanol:toluene (4:1:5) as the mobile phase. Densitometric detection was carried out at 254 nm. The method was validated for linearity, precision, selectivity, limit of detection, limit of quantification and accuracy. Linear calibration curves in the range of 5 to 80 µg/band gave a correlation coefficient of 0.991. The intra-day (n=6) and inter-day (n=18) precision, expressed as the relative standard deviation were in the range of 2.83 to 3.27 % and from 2.09 to 4.39 %. The limits of detection and quantification were found to be 1.07 and 3.15 µg/band, respectively. Accuracy was calculated as percent recovery and was found to be 97.52 and 115.23 %. Theophylline was used as an internal standard, which gave a well separated peak at Rf 0.36 without interfering with zonisamide. The method was found to be specific with no matrix interference. Thus, the method developed for the estimation of serum zonisamide level is simple, cost-effective and reliable for therapeutic drug monitoring.

Zonisamide is a 1,2-benzisoxazole derivative, a new generation antiepileptic drug, which suppresses the epileptogenic focus and blocks the spread or propagation of seizure discharges [1,2]. It is used in the treatment of simple and complex partial seizures, refractory partial seizures, generalized tonic-clonic, generalized clonic and infantile spasms [1-6]. Prevention and management of seizures requires continuous maintenance of effective levels of the antiepileptic drugs in the body. Due to pharmacokinetic variability and interaction with other antiepileptic drugs, there can be issues of either over-dosing resulting in toxicity, side effects like drowsiness, ataxia or under-dosing with zonisamide [1,2]. Hence it becomes imperative to perform regular monitoring of zonisamide drug level in patients.

Different approaches for determination of zonisamide have been proposed, the techniques such as high performance liquid chromatography, gas chromatography and micellar electrokinetic capillary chromatography [7-10]. However, all these techniques are not only expensive but also time-intensive. Hence, although therapeutic drug monitoring is important for this newer antiepileptic drug, not every patient can afford the costs required to carry out regular monitoring; therefore it was proposed to develop a method, which would be simple, reliable and cost-effective with a quicker turnaround time.

A twin trough chamber (20×10) was used for the development of the plates applied with samples and standards. Prior to development, the chamber was saturated with the mobile phase (ethyl acetate:methanol:toluene, 4:1:5) for 40 min. The plates developed up to 80 mm in approximately 10 min. The developed plates were then dried and scanned under 254 nm using TLC scanner IV. Evaluation of retention time of zonisamide and theophylline and their quantification was carried out using WinCats software.

To 150 μl of serum sample (calibration standards, quality control samples and patient samples), 10 μl of working solution of internal standard was spiked and liquid-liquid extraction was carried out using 450 μl of acetonitrile. The mixture was vortexed for 30 s and centrifuged at 21° for 15 min at 6000 rpm. The supernatant was recovered and evaporated to dryness under stream of nitrogen using nitrogen gas evaporator. The residue was reconstituted using 60 μl of methanol [11].

The method was validated according to the International Conference on Harmonization guidelines using the parameters, specificity, linearity, accuracy and precision, limit of detection (LOD) and limit of quantification (LOQ), and robustness. Specificity of the method is determined to ensure that the developed method is able to quantitatively detect a specific analyte in presence of other components and related substances present in the sample matrix. This parameter confirms that there is no interference of the diluents, internal standards and other components at the retardation factor of zonisamide. Specificity was analysed by comparing chromatograms of blank serum samples, spiked serum samples, diluents used, internal standard and the reference standard. Further spectral analysis was performed to ensure the specificity of the spectra of reference standard and extracted zonisamide samples [11-15]. Also interference with other antiepileptic drugs such as phenytoin, phenobarbitone, oxcarbazepine, carbamazepine, sodium valproate, leviteracetam, lamotrigine and topiramate were checked with the Rf of zonisamide.

Linearity of the method is the ability of the method within a given range to obtain the test results i.e. the ratio of areas under curves of zonisamide and internal standard, which are directly proportional to the concentration in the analyte of the sample. A concentration range of 5 to 80 μg/band was used. The aliquots of each concentration were prepared, analysed in triplicate for 3 different days. The coefficient of correlation, standard deviation and regression of the line was analysed to assess linearity of calibration curve [11-15].

Precision is the indication of random error and is expressed in terms of relative standard deviation (RSD). Accuracy is closeness between the actual value and the analytical value obtained and is expressed as % recovery. Precision and accuracy of the method were assessed by performing replicate analyses of the 3 quality control samples (5, 40 and 80 μg/band, each concentration was prepared in three replicates, and each replicate was spotted thrice) against the calibration curve by carrying out the analytical run within the same day twice with 3 h interval (intra-day) and for 6 d (inter-day).

Robustness is the capability of the method to remain unaffected by small changes in the method. Robustness was performed by changing the ratio of the mobile phase, altering the wavelength and altering the plate activation time. The altered mobile phase ratio used was ethyl acetate:methanol:toluene (3:2:5), ethyl acetate:methanol:toluene (5:1:4), the altered wavelength used was 250 and 260 nm and the plate were activated at 10° and 120°. Robustness of the method was carried out in triplicates and its mean and % RSD were calculated [16,17].

During the method development, mobile phase optimization was carried out by selecting proper solvents in different ratios and was finalized to be ethyl acetate:methanol:toluene (4:1:5) based on the resolution and stability with the saturation of 40 min. Also the extraction method was developed by changing the optimized volume of acetonitrile used for extraction.

Zonisamide and the internal standard were well separated at retardation factor (Rf) of 0.61±0.2 and 0.36±0.3 (figure 1). The spectra of the serum sample spiked with zonisamide and internal standard and the spectra of their respective reference standards coincided indicating specificity of the method whereas blank plasma and diluents did not yield any peak at that Rf of both the analyte indicating no matrix interference (figure 2). Additionally, other antiepileptic drugs did not show any interference at the Rf of zonisamide. 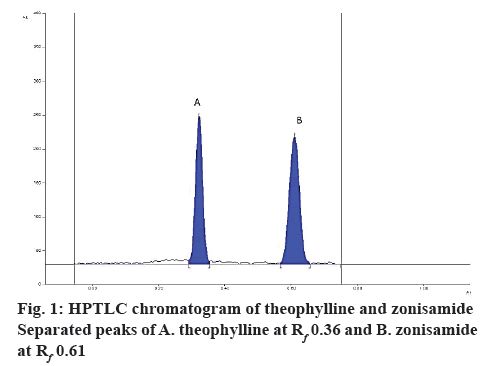 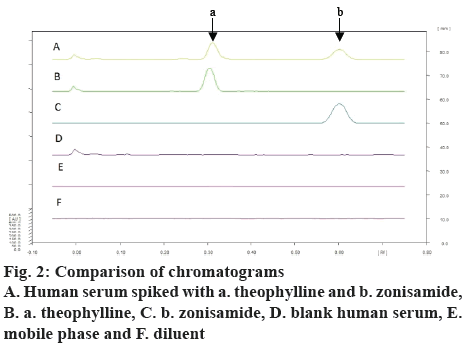 Table 1: Precision of Zonisamide in Serum

Table 2: Accuracy of Zonisamide in Serum

The calibration curve was found to be linear with a regression Eqn. of y=52.5691(±0.47) X–181.5604(±2.29), standard deviation of 3.09 and coefficient of correlation was found to be 0.991. The lowest LOD and the lowest limit of quantification were found to be 1.07 and 3.15 μg/band, respectively, which were well within in the therapeutic range. Robustness was carried out by altering one factor at a time while the other factors were kept constant. No large difference was observed in the peak area and the Rf of zonisamide. Table 3 indicates the robustness of the method.

The validated method was used for drug analysis on 30 epileptic patients, who were receiving oral zonisamide. Venous blood was collected aseptically and centrifuged at 1200 rpm for 10 min to separate out the serum, which was then frozen at –20° till analysis. After carrying out the analysis of these 30 patients’ samples, it was found out that the quantification values of 24 patient samples were well within the therapeutic range while that of 2 patients were above the therapeutic range. The bands of the analyte were below the LOD in 4 patients. When the drug levels of these 4 patient samples were correlated with the medical history of the patients, it was found that one of the four patients, in whom the zonisamide level was below the detection limit, had stopped therapy 5 d previously while 3 patients had history of poor compliance.

A wide range of approaches to assess blood concentration of zonisamide have been proposed, however these techniques are very expensive and are not accessible to every patient. Considering the effectiveness of this new antiepileptic drug, it is important that therapeutic drug monitoring of zonisamide be carried out cost effectively so that all patients can easily manage regular monitoring and dose adjustment. Curiously enough, there are very few reports on therapeutic drug monitoring using HPTLC, which is a comparatively less expensive technique. Hence, a method for the determination of serum zonisamide levels using HPTLC was developed, which was found to be simple, reliable and cheap. Simple, as it involved simple liquid-liquid extraction using acetonitrile. The single step extraction did not jeopardize the accuracy and specificity. In fact, this method gave better resolution as there was no matrix interference. Using theophylline as an internal standard for the determination of zonisamide concentration made the method more reliable as it gave a well separated peak without any matrix interference. Robustness indicated that the method is stable over small changes. The mobile phase used gave proper resolution of the analyte and the internal standard and was also used in small volumes compared to the HPLC technique, which further reduced the cost.

When the results of the developed and validated method were compared to those obtained using high performance liquid chromatography (HPLC), HPTLC and gas chromatography, there were no significant difference in the accuracy and precision, the only limitation was that the LOQ and LOD were higher in the present study as compared to those obtained using the HPLC method. The lowest LOQ in HPLC documented in literature was approximately 0.1 μg/ml [18,19] while in the present study, it was 3.15 μg/ml. However, the LOQ of this HPTLC method is well below the therapeutic range, which is 10 to 40 μg/ml and therefore, could be used reliably to carry out therapeutic drug monitoring. The HPTLC method allows analysis of 10 samples at the same time, thus reducing the turnaround time and earlier reporting of patient samples. Thus the developed and validated HPTLC method is simple and reliable to perform therapeutic drug monitoring of zonisamide.

We would like to thank Sun Pharmaceuticals Industries Limited, Mumbai India for their kind donation of zonisamide sample.