Development and Validation of a Novel UV Spectrophotometric Method for Simultaneous Analysis of Amlodipine, Indapamide and Perindopril

A simple, accurate, precise and economic Ultraviolet spectrophotometric method has been developed for the simultaneous estimation of amlodipine, perindopril and indapamide. The developed method was based on determination of the three drugs using Ultraviolet absorbance correction method. The three wavelengths chosen were 365 nm for amlodipine as absorbances due to other two drugs were nil at this wavelength, 245 nm for indapamide (corrected for absorbance due to amlodipine) and 204 nm for perindopril (corrected for absorbances due to amlodipine and indapamide) with water as diluent. The Beer Lambert’s range for the three drugs was 10-60 μg/ml, 5-20 μg/ml and 10-100 μg/ml for amlodipine, indapamide and perindopril respectively, with correlation coefficient (r2) of ≥0.999. The developed method was validated as per International Conference on Harmonisation guidelines and was found to be accurate, precise, sensitive and robust. The percentage assay results were within acceptable limits. Hence the developed method can be successfully used for the routine analysis of amlodipine, perindopril and indapamide in bulk and in combination.

Amlodipine (AMD), an antihypertensive drug belongs to the group of drugs called dihydropyridine calcium channel blockers. It is commonly used in the treatment of high blood pressure and angina. It also has antioxidant properties and ability to enhance the production of nitric oxide (NO), an important vasodilator that decreases blood pressure. Perindopril (PD) is a nonsulfhydryl prodrug belonging to the angiotensin-converting enzyme (ACE) inhibitor class of medication. It is rapidly metabolized in the liver to its active metabolite perindoprilat, following oral administration. It acts by inhibiting ACE and therefore prevents the conversion of angiotensin I to angiotensin II; consequently, angiotensin II mediated vasoconstriction and angiotensin II mediated aldosterone secretion from the adrenal cortex are inhibited thus resulting in decreased blood pressure [1]. Indapamide (IND), a thiazide-like diuretic results in an overall decrease in blood pressure through its diuretic action (increase in urine output) and vasodilatory properties (inhibiting influx of calcium or other ions) [2].

AMD was supplied by Alkem Laboratories Ltd. (Mumbai, India), PD was supplied by Glenmark Pharmaceuticals (Goa, India) and IND was supplied by Adock Ingram Ltd. (Bangalore, India). Synthetic mixture containing 10 mg each of AMD and PD and 2.5 mg of IND was prepared inhouse. Methanol used was of spectroscopic grade. The analysis was carried out on Shimadzu 1800 double beam UV spectrophotometer. The software used was UV Probe.

About 25 mg each of AMD, IND and PD standards were weighed and transferred separately into three 25 ml volumetric flask. Volume was made up to 25 ml with methanol to obtain stock solutions of each drug (1000 μg/ml).

Stock solutions of AMD, IND and PD were diluted with distilled water to obtain working standard solutions in the concentration ranges of 10-100 μg/ml for AMD and PD and 5-100 μg/ml for IND.

About 1 ml stock solution of each drug was diluted to 10 ml with distilled water to obtain a solution of 100 μg/ml concentration. From this, a mixed drug standard solution was prepared by taking 1 ml each of AMD and PD and 0.25 ml of IND into a 10 ml volumetric flask. Volume was adjusted to the mark with distilled water to obtain a concentration of 10 μg/ml for AMD, PD and 2.5 μg/ml for IND.

The absorbance of the working standard solutions was recorded at their predetermined wavelengths. Calibration curves were plotted and absorptivity values for the drugs were calculated.

To determine linearity range for the drugs, a series of working standard solutions were prepared from the respective stock solutions of drugs. A volume of 0.125 ml, 0.25 ml, 0.5 ml, 0.75 ml, 1 ml, 1.25 ml, 1.5 ml, 1.75 ml, 2 ml, 2.25 ml and 2.5 ml of stock solution of each drug was pipetted into 25 ml volumetric flasks and volume was made up with distilled water to obtain solutions in concentration range of 10-100 μg/ml for AMD and PD and 5-100 μg/ ml for IND. Absorbance of the solutions were recorded at predetermined wavelengths and calibration curves of absorbance vs. concentration were plotted. The linear regression equations and correlation coefficients (r2) were determined.

Precision analysis was carried out by performing intraday and inter-day precision studies. About 0.5 ml of mixed standard solution of drugs was pipetted into three 25 ml volumetric flasks and volume was made up to the mark with distilled water. Absorbance of the solutions was recorded against blank at predetermined wavelengths. Concentration of each drug was determined using the equations with their respective absorptivity values. Intra-day precision was performed by repeating the procedure thrice in a day while inter-day precision studies were performed on three consecutive days in triplicate.

The accuracy of the developed method was verified by performing percentage recovery studies at 80 %, 100 % and 120 %. About 2 mg of placebo powder was weighed and transferred into nine volumetric flasks of 25 ml capacity. To the three sets of flasks (consisting of three flask each), the mixed standard solution of drugs in a volume of 0.4 ml (80 % level), 0.5 ml (100 % level) and 0.6 ml (120 % level) was added. About 20 ml of distilled water was added to all the three sets and sonicated for about 5 min. After sonication volume was made up to 25 ml with the diluent and filtered through a Whatman filter paper. Absorbance of the filtrate was recorded at predetermined wavelengths against blank sample prepared in a similar manner omitting the drug.

LOQ was calculated using slope and standard deviation response of calibration curves of drugs at the particular wavelength.

The robustness of the method was verified by performing the assay of the mixed standard solution. Deliberate minor changes were introduced in experimental conditions such as use of different UV spectrophotometer; change of analyst and by altering the composition of the diluent. The percentage assay values were determined.

Assay of synthetic mixture of drugs:

A quantity of synthetic mixture equivalent to 12.5 mg of AMD was accurately weighed and transferred to a 25 ml volumetric flask. About 20 ml of methanol was added and dissolved by shaking for about 5 min. The volume was made up to 25 ml with methanol. The solution was filtered through a Whatman filter paper no. 1. From the filtrate, 0.5 ml was withdrawn and transferred to a 25 ml volumetric flask in triplicate and volume was made up to the mark with distilled water. Absorbance of these solution were recorded at predetermined wavelengths i.e. λ1, λ2 and λ3 and respective absorbance values were noted as A1, A2 and A3.

Concentration of each drug was determined using the following equations:

The bench top stability was determined by using the mixed standard solution. About 0.5 ml of the mixed standard solution of drugs was transferred into a 25 ml volumetric flask and the final volume was made up with distilled water. This solution was kept on the bench top at room temperature and absorbance was recorded against the blank at predetermined wavelengths for time intervals up to 24 h. From the absorbance values, the percentage purity of the drugs was calculated to determine the stability period on bench top.

The choice of the diluent was based upon the solubility of the drugs. The drugs were completely soluble in methanol and partially soluble in water. Hence, methanol was used as a solvent to prepare the stock solution and distilled water was used to prepare subsequent dilutions. 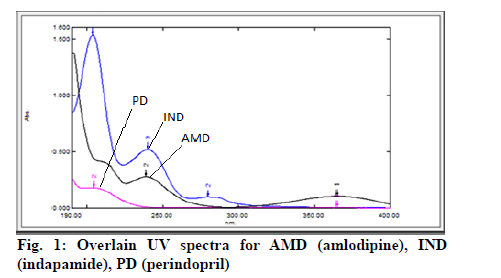 Linearity range for each drug was obtained by plotting calibration curves at predetermined wavelengths. The calibration plots for the drugs are displayed in fig. 2, 3 and 4. Good correlation between the absorbance and concentration of the drugs was obtained in the concentration range 10-60 μg/ml for AMD, 5-20 μg/ml for IND and 10-100 μg/ml for PD. The results of linearity for AMD, IND and PD are given in Tables 1, 2 and 3 respectively.

Precision was carried out by analysing the mixed standard solution of drugs in triplicate against the blank thrice a day for intraday studies and on three consecutive days in triplicate for interday precision analysis. The results as depicted in Table 4 and 5 gave percentage relative standard deviation (RSD) values of less than 2 %.

LOD and LOQ were calculated using slope and standard deviation response from the calibration curves of drugs at their respective wavelengths. The results as depicted in Table 9 show that the method was sensitive.

The robustness of the method was determined by introducing deliberate changes in the experimental conditions during the analysis of mixed standard solution of drugs, namely use of different instrument, change of analyst and by altering composition of diluent. The results as depicted in Table 10 show that the deliberate changes do not affect the results of analysis as percentage purity was found to be within the acceptance criteria of 90-110 %. Hence the developed UV method was found to be robust.

The synthetic mixture of drugs was analyzed at predetermined wavelengths i.e. λ1, λ2 and λ3 in triplicate and the respective absorbance values were noted as A1, A2 and A3. The percentage purity of AMD, IND and PD were found to be 99.70 %, 103.20 % and 97.80 % respectively, which comply with the acceptance criteria of 90-110 %. The results are depicted in Table 11.

For bench top stability, the absorbance of the mixed standard solution kept on the bench top at room temperature was recorded every hour till 6 h and then at 24 h. Stability of the sample solution was determined by calculating the percentage purity. The results as depicted in Table 12 show percentage purity in the range of 90-110 % for a period of up to 3 h. Hence the solution was found to be stable for a period of 3 h on bench top.

A novel and simple UV absorbance correction method has been developed for the simultaneous analysis of AMD, IND and PD in combination. The developed UV spectroscopic method employed water as diluent after the preparation of stock solutions in methanol. The three wavelengths chosen for the estimation of drugs were 365 nm for AMD as absorbances due to other two drugs were nil at this wavelength, 245 nm for IND (corrected for absorbance due to AMD) and 204 nm for PD (corrected for absorbances due to AMD and IND). Method validation was done as per International Conference on Harmonisation (ICH) guidelines. The linearity range for the drugs were 10-60 μg/ml, 5-20 μg/ml and 10-100 μg/ml for AMD, IND and PD respectively. The method was found to be sensitive, accurate, precise and robust. The percentage assay of AMD, IND and PD in synthetic mixture was found to be 99.70 %, 103.20 % and 97.80 % respectively, which were within the acceptance criteria. Hence the developed method is a cost effective analytical tool for the simultaneous estimation of the three drugs in combination by UV spectroscopy.