A new simple, rapid and sensitive reversed-phase high-performance liquid chromatography method was developed and validated as per International Conference on Harmonization guidelines, Q2 R1, for simultaneous estimation of isoniazid, pyrazinamide and rifampicin in solid lipid nanoparticles. Separation was achieved on a 250×4.6 mm, 5 μm, C-18 column using a linear gradient flow rate of 1.5 ml/min. Isoniazid, pyrazinamide and rifampicin were identified based on their retention times as compared to standards and confirmed with characteristic spectra on a spectrophotometer at 238 nm and eluted at 3.787, 4.173 and 11.273 min, respectively, achieved within 20 min. This method was linear, precise with % RSD values of 0.18 % for isoniazid, 0.15 % for pyrazinamide and 0.47 % for rifampicin, accurate with mean recovery yields of 101.312 % for isoniazid, 99.910 % for pyrazinamide and 99.767 % for rifampicin and selective over the concentration range of 10-150 % for all the three drugs. This method is suitable due to its simplicity and accuracy for routine quality control and stability analysis of antitubercular drugs-loaded solid lipid nanoparticles.

Spectrophotometric and reversed-phase highperformance liquid chromatography (RP-HPLC) techniques have been reported for individually or the combination of two or more ATDs and other drugs estimation in biological samples and pharmaceutical formulations [4-19]. In the previous years, simultaneous estimation of INH, PYZ and RIF in fixed combination of unit doses by high-performance thin layer chromatography [20], multivariate spectrophotometric calibration method [21] and calorimetric analysis [22] have been published. However, many of these methods suffer from limitations such as complex and tedious procedures and are not validated as well.

HPLC is the method of choice for analysis of multicomponent pharmaceutical preparation because of its sensitivity, reproducibility and specificity. The problems associated with optimization of chromatographic conditions such as selection of column type, column temperature, the composition of the mobile phase, selection of the specific wavelength and injection volume. In spite of the fact, this method undoubtedly provides the more sensitive determination than the spectrophotometric methods. It has now become the method of choice for most of the drug and their combinations. Gaitonde and Pathak reported a RP-HPLC method for the simultaneous estimation of INH, PYZ and RIF. They used tetrabutylammonium hydroxide as an ion-pairing agent in the mobile phase which shortens column life [23]. Calleri et al. developed an HPLC method having high buffer concentration in the mobile phase of acetonitrile (A) and 50 mM phosphate buffer pH 3.5 (B). The gradient profile was (A:B) 3:97 v/v for 5 min, then a linear gradient to 50:50 v/v at 30 min and return to 3:97 v/v in 10 min. Chromatography was performed at room temperature using a flow rate of 1 ml/min and a run time of 40 min. Diode-array detector with three different corresponding maximum of 254 nm for RIF, 261 nm for INH and 265 nm for PYZ were used, this method was time consuming and conditions specific [24]. Dhal and Sharma reported RP-HPLC method for simultaneous estimation of pyridoxine hydrochloride, INH, PYZ and RIF. The result showed that the highest values for limits of detection (LOD) were 0.043, 0.063, 0.036 and 0.059 μg/ml and limits of quantification (LOQ) were 0.13, 0.19, 0.11 and 0.18 μg/ml, respectively. So, this method is not sensitive to detect the lowest concentration of combined ATDs [25]. The Indian Pharmacopoeia 2014 and United States Pharmacopeia 2016 published HPLC method for simultaneous determination of INH, PYZ and RIF in the tablet and capsule dosage forms [26,27].

The aim of this study was to develop and validate an accurate and sensitive RP-HPLC method for simultaneous estimation of INH, PYZ and RIF in solid lipid nanoparticles (SLNs). The validation results obtained showed that this method was simple, accurate, precise and suitable for the determination of ATDs in SLNs.

Chromatographic analysis were performed in a linear gradient programme using mobile phase A and mobile phase B with the flow rate of 1.5 ml/min (Table 1). Chromatographic system set the spectrophotometer at 238 nm and the column temperature was maintained at 30°. The samples were diluted with orthophosphoric acid (OPA) buffer solution pH 6.8±0.02 and 20 μl was injected into the column.

Preparation of the solutions

Preparation of stock and standard solution

Validation of the RP-HPLC method was performed as per the International Conference on Harmonization guideline, Q2 (R1) specifications after the establishment of chromatographic and the experimental conditions [28].

To ensure the validity of the analytical procedure, a system suitability test (SST) was established. Percent relative standard deviation (% RSD) of the area, RSD of retention time (RT), USP tailing factor, theoretical plates, and resolution were selected for SST. These parameters were analysed by injecting the standard solution six times. The system suitability results are summarized in Table 2 and could be observed as the parameters analysed were in accordance with acceptance criteria.

Specificity of the method was established to ensure that the components of the SLNs dispersion such as lipid(s) and surfactant(s), does not interfere in the quantification of the drugs [29]. The specificity of the method was evaluated by comparing the chromatograms of ATDs extracted from SLNs and of blank nanoparticles to determine the peak purity.

For linearity, stock solutions of INH, PYZ and RIF at 15 concentrations between 10 to 150 % were injected in triplicate. Calibration curves of standard INH, PYZ and RIF were generated by plotting the analyte peak area versus % drug concentration. Linearity is confirmed if the % RSD values of the slope and the intercept are <1 %.

The system precision of the method was determined by performing intra-day and inter-day analysis by triplicate injections of the QCS. The % RSD (% RSD=SD/mean×100) and % accuracy (% accuracy = mean area of test/mean area of standard×100) were calculated by comparing the theoretical and measured concentration for each case (Table 3). According to the ICH guideline, coefficients of variation for the precision shall not exceed 5 %.

Table 3: Intra-day and inter-day precision and accuracy of INH, PYZ and RIF

To determine the accuracy of the proposed method, recovery studies were conducted. The extraction process of the method was quantified by comparing three separately extracted sample preparation (SLNs containing ATDs and excipients) against a standard solution. The acceptance criterion for the extraction study was the mean recovery of the extracted ATDs from SLNs relative to the standard solution shown in Table 4.

aMean of two extractions (each analyzed in duplicate)

LOD was the lowest concentration of the analyte in a sample that could be detected under the stated experimental condition. LOQ is the lowest concentration of the active ingredients in a sample that could be determined with acceptable precision and accuracy. According to the ICH recommendation, the approach based on the standard deviation (SD) of the response and slope (m) was used for determining the detection and quantitation limits. LOD can be calculated according to the formula, LOD=3.3 (SD/m) and LOQ according to the formula, LOQ=10 (SD/m) [30].

SLNs were prepared using a modified microemulsion technique, freeze-dried and stored at 4° [31]. The mean particle size and the polydispersity index (PDI) were determined using dynamic light scattering (Malvern Instruments Ltd. Zetasizer Ver. 7.11), at room temperature. To determine the amount of ATDs in SLNs, 5 mg of lyophilized SLNs were transferred into a 5-ml volumetric flask and 3 ml of ethanol was added. This mixture was heated to 50° with sonication and final volume was made up to 5 ml of ethanol [32,33]. The above solution (1 ml) was placed in a 50 ml volumetric flask and diluted with buffer. The sample was ultrasonicated for 10 min and filtered with nylon syringe filter (0.22 μm). Further 1 ml of the filtrate was diluted up to 10 ml with buffer. The sample was analysed by using the designed chromatographic conditions as discussed earlier. Subsequently, the EE was calculated with the help of the reported Eqn. [34], % EE = (total drug–free drug)/(total drug)×100. Where, total drug corresponds to the amount of ATDs initially added to the SLNs dispersion and free drug is the amount of the drug not incorporated into the lipid nanoparticle, quantified by RP-HPLC method. The % EE was quantified by RP-HPLC method and the value of % EE was expressed as mean and SD [34].

In order to optimize good separation between all the three ATDs drugs at different buffer pH and organic solvents like acetonitrile and water tested binary and tertiary eluents. Therefore, best chromatographic conditions concluded with different ratio of 17.85 mmol OPA buffer (pH 6.8) and acetonitrile, flow rate of 1.5 ml/min and detected at 238 nm. The analytical profile obtained by injection of a standard working solution was reported in Figure 2. The analytical profiles obtained by injection of extracted spiked SLNs without active pharmaceutical ingredients and of extracted spiked ATDs-loaded SLNs were reported in Figure 3. The SST parameters such as RT, USP tailing, theoretical plates and resolution for optimizing standard chromatogram are tabulated in Table 2. 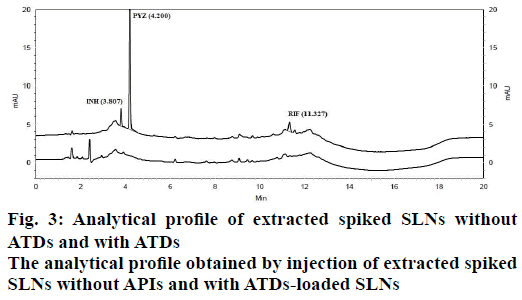 The SST is an integrated part of the analytical method and it ascertains the suitability and effectiveness of the operating system. The results were within the limit and are presented in Table 2 and system suitability chromatogram in Figure 2. The USP tailing factor for the analytes peaks were less than 2.0, the % RSD of the peak areas responses less than 2 % and the migration times within seconds.

Specificity is the ability of the method to measure the analyte response in the presence of its potential impurities and degradation products [35]. The representative chromatograms of INH, PYZ and RIF were identified with the RT as compared with the standard at 3.887, 4.200 and 11.327 min, respectively. The specificity studies revealed the absence of any other excipients interference, since none of the peaks appeared at the same RT, as shown in Figure 3. The specificity was justified from complete separation of drugs from SLNs and indicated that there was no interference in the quantitative determination of ATDs from SLNs components.

Linear responses were observed in the range of 8-120, 40-600 and 16-240 μg/ml for INH, PYZ and RIF, respectively. The linear regression analysis obtained by plotting the peak areas of the three analytes versus percent concentration. The result showed excellent correlation coefficients (R2≥0.999) and the linearity data was reported in Table 5.

Table 6: Results of LOD and LOQ

The SLNs containing ATDs were successfully obtained by microemulsion technique and proposed analytical method was applied to evaluate the EE of ATDs in SLNs. As shown in the specificity test, no alterations or unusual peaks were observed in the chromatograms during the drug quantitation. The mean recovery yields were 101.312, 99.910 and 99.767 % for INH, PYZ and RIF, respectively. The results demonstrated that the method used was efficient in associating the drugs with SLNs. The average diameter of the solid nanoparticles was 374.1±3 nm and PDI (0.436±0.005) indicating mono-modal size distribution. Therefore, the proposed RP-HPLC method represented an alternative method for the simultaneous estimation of INH, PYZ and RIF in SLNs. The method fulfilled all requirements and considered as reliable, feasible and could be applied for the determination of assay, EE, in vitro drug release and stability of ATDs-loaded SLNs.

The RP-HPLC method developed was found to be a convenient and cost-effective method for the simultaneous estimation of INH, PYZ and RIF in SLNs. This method was validated according to the ICH guidelines Q2 (R1) and was found to be a reliable and feasible method, which included specificity, linearity, precision, accuracy, LOD and LOQ. The chromatographic run time was 20 min, which allowed numerous samples to be analysed in a short period, as well as reduced solvent costs and damage to the environment. Hence it was concluded that the validation parameters showed the method to be excellent for the routine quality control analysis of INH, PYZ and RIF ATDs-loaded SLNs.

The authors confirm that this article content has no conflict of interest.

One of the author’s Sunil Khatak is grateful to IPC, Ghaziabad, UP, India, for providing necessary instrumental facilities and gift samples of ATDs.