Cissus quadrangularis L. is a promising remedy prescribed in the ancient Ayurvedic literature for bone fracture healing properties. As this activity has been extensively investigated and well established, a range of formulations containing C. quadrangularis has been marketed. This work reports the development and validation of a reliable RP-HPLC method for the analysis of phytosterols in the various extracts of the plant. The proposed method utilizes a Cosmosil C 8 column (250 Î„ 4.6 mm) with a compatible Phenomenex C 8 guard column with isocratic elution of acetonitrile and water (95:5 v/v) at 25Î€. An effluent flow rate of 2 ml/min and UV detection at 202 nm was used for the analysis of phytosterols. The described method was linear in the range of 1-500 μg/ml, with excellent correlation coefficients. The precision, robustness and ruggedness values were also within the prescribed limits (less than 2%). The recovery values were within the range, which indicates that the accuracy of the analysis was good and that the interference of the matrix with the recovery of phytosterols was low. The phytosterols were found to be stable in a stock solution for 48 h (% RSD was below 2%) and no interfering extra peaks were observed under controlled stress conditions. The proposed method is simple, specific, precise, accurate, and reproducible and thus can be used for routine analysis of C. quadrangularis phytosterols in quality control laboratories.

Cissus quadrangularis L. (CQ), a succulent plant of the family Vitaceae, is commonly found in tropical and subtropical xeric woods. It is a fleshy, cactus-like liana widely used as a food item in India [1]. The plant is prescribed in the ancient Ayurvedic literature as a general tonic and analgesic, with specific bone fracture healing properties [2]. Bone fracture healing properties of the plant have been extensively investigated and well established [3-11]. Because being an effective remedy in the treatment of bone fractures, a range of formulations containing CQ extract either alone or in combinations with other herbs have been marketed. However, due to a lack of data that link the bone fracture healing property of the plant with specific groups of phytochemicals, no reliable quality control methods have been developed. Nevertheless, the HPTLC method of quantification of certain marker constituents isolated from CQ, such as unsymmetric tetracyclic triterpenoids, along with δ-amyrin and δ-amyrone, has been reported [10]. Further, a HPLC method of quantification of another marker compound, 3,3′,4,4′-tetrahydroxybiphenyl, has also been reported as a pharmacopoeial standard for CQ [10]. However, it is well established that quantification of marker compounds does not necessarily dictate the quality of the plant material unless these are related to desired pharmacological effects.

The role of the neurotransmitter serotonin has been increasingly implicated in bone metabolism [12-14]. It has been suggested that serotonin is involved in bone remodeling and fracture repair by stimulating the proliferation of osteoblast precursor cells [12]. Although direct evidence is lacking, phytosterol-enriched CQ extract reportedly increases the serum serotonin level in experimental animals [15]. Further, osteoblastic activity of the ethanol extract of CQ has been reported [9]. These observations suggest that quantification of the major phytosterols such as β-sitosterol and stigmasterol is not only important but also the appropriate way to standardize the plant extracts/ preparations indicated for bone fracture treatment.

A variety of techniques for the quantification of phytosterols in different matrices has been reported [16,17]. However, no method has been reported for simultaneous estimation of β-sitosterol and stigmasterol from the CQ matrix. It should be noted that each matrix is unique, and the conditions have to be selected to optimize an accurate method in the presence of other chemical constituents. Therefore, the aim of the present study was to develop a simple HPLC method of analysis for simultaneous estimation of the major sterols, i.e. β-sitosterol and stigmasterol, from CQ as a quality control parameter.

The plant material was collected from the campus of the Anand Agriculture University, Anand, Gujarat, India in August 2008. Plant specimen was authenticated at B. R. Doshi School of Biosciences, Sardar Patel University, Vallabh Vidhyanagar, Gujarat, India (PHPL/HB/003). Stigmasterol and β-sitosterol were purchased from Chromadex Inc Irvine, USA. Acetonitrile, water and methanol (HPLC grade) were purchased from Merck Ltd., India. The other chemicals used were of analytical grade.

A Prominence series HPLC system, equipped with an LC 20AT solvent delivery unit, autosampler, CTO- 20AC column oven and SPD-M20A photodiode array detector (Shimadzu Corporation, Japan), was used for acquiring the chromatograms and UV spectra. The chromatographic separation was performed using a Cosmosil C8 column (250 × 4.6 mm, 5 μm i.d.) with a compatible Phenomenex C8 guard column (4.6 × 7.5 mm, 5 μm i.d.) at 25°. The mobile phase consisted of acetonitrile and water (95:5 v/v), filtered through a 0.2 μm membrane filter and degassed in an ultrasonic bath prior to use. The mobile phase was delivered at a flow rate of 2.0 ml/min in the isocratic mode. Quantitation of stigmasterol and β-sitosterol was performed by injecting 20 μl volume with the UV detector set at 202 nm.

Powdered crude drug (5 g) was accurately weighed and extracted with methanol (3 × 10 ml) at 40° for 6 h, the solvent being refreshed at the end of 2 h. Pooled extracts were concentrated on a rotary vacuum evaporator and further dried using an oven at 80°. The yield of extract was 5.25% w/w. Stock solutions of the reference compounds (1000 μg/ml) and test extract (5000 μg/ml) were prepared separately by dissolving them in methanol, and further dilutions were prepared from these stock solutions. The standard stock and working solutions were all prepared in calibrated flasks.

The robustness and ruggedness of the method were investigated by varying the chromatographic conditions, such as the flow rate (±10%), organic phase composition (±2%) and wavelength of detection (±5 nm) and varying the analysts. The results were indicated by the % RSD between the data at each variable condition (Table 4).

The spike recovery was carried out by the standard addition method. For determination of the recovery from the methanol extract, five sets were prepared, each comprising 5000 μg/ml of sample and external addition of reference compounds.

The stability of phytosterols in standard stock solutions was investigated at different time intervals at room temperature. The experiment was also carried out to demonstrate the specificity of the developed method for the determination of stigmasterol and β-sitosterol in the presence of products generated during controlled stress conditions as well as other compounds from the plant matrix. The samples were subjected to controlled levels of various stress conditions. These include thermolysis at 110º in an oven, photolysis by UV-light at 254 nm, acid hydrolysis (0.1 M H2SO4), and alkali hydrolysis (0.1 N NaOH). Twenty-microliter samples (5000 μg/ml) were drawn at 6, 12, 24, and 48 h, and the peak area responses were recorded under the optimized chromatographic condition.

Quantification of phytosterols from different extracts of CQ

The optimized HPLC method was used to estimate the phytosterols in seven extracts of CQ prepared in different solvents according to the method specified above. The solvents used included methanol, ethanol, ethyl acetate, acetone, methanol (80%) and water. The stock solutions of each extract (5000 μg/ ml) were prepared separately by dissolving it in methanol, and a sample of 20 μl was subjected to HPLC analysis, and the peak area responses were recorded under the optimized chromatographic condition.

In this work, a method based on reversed phase HPLC separation combined with PDA detection has been developed for phytosterol analysis in Cissus quadrangularis. An isocratic elution was chosen since it is simple, requires only one pump and minimizes the variation of baseline and ghost peaks. For RP-HPLC, various columns are available, but a Cosmosil C8 column (250 × 4.6 mm, 5 μm i.d.) was preferred because its peak shape and resolution were better. Among the different mobile phases employed, acetonitrile and water (95:5 v/v) was found to be suitable for analysis of stigmasterol and β-sitosterol. Further, a flow rate of 2 ml/min and an injection volume of 20 μl along with UV detection at 202 nm provided the optimal conditions for analysis of these phytosterols (Table 1 and fig. 1). 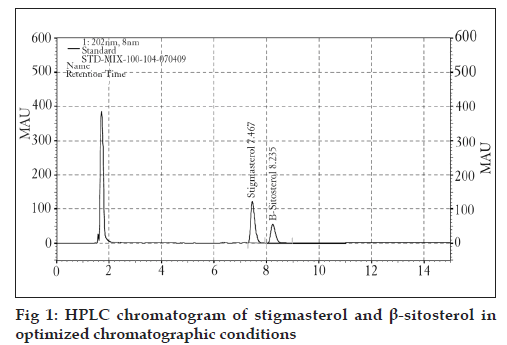 The RP-HPLC method is robust and rugged since the % RSD values are lower than 2% for all four variables (Table 4). As shown in Table 5, the spike recovery values fall within the range from 96.09 to 99.48 for stigmasterol and from 95.15 to 98.79 for β-sitosterol, which indicates that the accuracy of the analysis is good and that the interference of the matrix with the recovery of phytosterols is low. The phytosterols were found to be stable in stock solutions for 48 h. The % RSD values were 0.56 and 0.04 for stigmasterol and β-sitosterol, respectively (Table 6). Further, the controlled stress stability results reveal that although the peak area responses were reduced after physical and chemical degradation, no extra peaks of degradation products were co-eluted (Table 7 and fig. 2). Among the different extracts investigated for phytosterol content using the optimized HPLC method, the methanol extract was found to contain higher amounts of stigmasterol and β-sitosterol, as shown in Table 8.

* UV-light irradiation was conducted at 254 nm 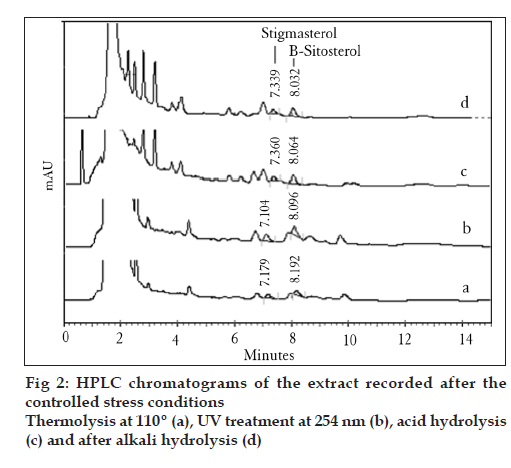 Figure 2: HPLC chromatograms of the extract recorded after the controlled stress conditions Thermolysis at 110º (a), UV treatment at 254 nm (b), acid hydrolysis (c) and after alkali hydrolysis (d)

In conclusion, a simple, specific, precise, rapid, and reproducible HPLC method has been developed to quantify phytosterols, relevant marker compounds, in extracts of C. quadrangularis. The validation procedure confirms that this is an appropriate method for quality control of extracts of C. quadrangularis especially indicated for bone fracture healing by the pharmaceutical industry.