A stability indicating reversed-phase high-performance liquid chromatography method was developed and validated for simultaneous quantification of sofosbuvir and ledipasvir in tablets. The chromatographic separation was done in an isocratic mode using the Discovery C18 (250×4.6 mm, 5 µ particle size) column. The mobile phase 0.1 % ortho phosphoric acid and acetonitrile 45:55 (% v/v) at a flow rate of 1.0 ml/min and at ambient temperature was used. The wavelength used for detection was 270 nm. The retention time for sofosbuvir was found to 2.08 min and that of ledipasvir was 3.06 min. Sofosbuvir and ledipasvir were linear in the concentration ranges of 100 to 600 µg/ml and 22.5 to 135 µg/ml, respectively. The developed method was validated and found to be accurate, specific and robust. Both the drugs were subjected to the stressed conditions like acidic, basic, oxidative, photolytic and thermal conditions. The degradation results were found satisfactory. This method could be applied for the simultaneous estimation of sofosbuvir and ledipasvir in tablets.

Sofosbuvir [1-4], isopropyl (2S)-2- [ [ [(2R,3R,4R,5R)- 5-(2,4-dioxopyrimidin-1-yl)-4-fluoro-3-hydroxy- 4-methyl-tetrahydrofuran-2-yl]methoxy-phenoxyphosphoryl] amino]propanoate (Figure 1A), is a white crystalline solid, slightly soluble in water and has a pKa value of 9.38. It is an antiviral drug acts by inhibiting NS5B polymerase, used in the treatment of hepatitis C. Ledipasvir [5-7], methyl N- [(2S)-1- [(6S)-6- [5- [9,9-Difluoro-7- [2- [(1S,2S,4R)-3- [(2S)- 2-(methoxycarbonylamino)-3-methyl butanoyl]-3- azabicyclo [2.2.1]heptan-2-yl]-3H-benzimidazol-5- yl]fluoren-2-yl]-1H-imidazol-2-yl]-5-azaspiro [2.4] heptan-5-yl]-3-methyl-1-oxobutan-2-yl]carbamate (Figure 1B), is white to off-white crystalline solid, slightly soluble in water and has pKa values of 4.0 and 5.0. It is also an antiviral drug acts by inhibiting viral phosphoprotein NS5A, which is involved in viral replication, assembly and secretion. It is used to treat chronic hepatitis C. Literature survey [8,9] reveals that, only ultra-performance liquid chromatography-tandem mass spectrometer method and liquid chromatography with tandem mass spectrometry method were developed for the simultaneous determination of sofosbuvir and ledipasvir. As no reversed-phase high-performance liquid chromatography (RP-HPLC) method has been reported, the present method aimed to develop and validate a stability indicating RP-HPLC method for the simultaneous estimation of sofosbuvir and ledipasvir in bulk and pharmaceutical dosage form. 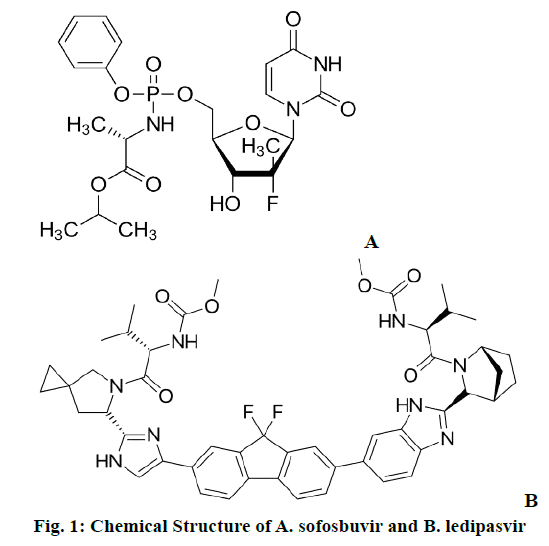 Figure 1: Chemical Structure of A. sofosbuvir and B. ledipasvir

System suitability parameters were noted by injecting the standard solution five times into HPLC system. The results were summarized in Table 1. The specificity study was conducted using placebo method. Placebo solution was injected twice into the column and its interference with that of standard solution was observed [10-12].

Precision (% RSD) of the method was determined by injecting six sample solutions and peak areas were noted. For determination of accuracy of the method, samples were prepared by spiking method at 50, 100 and 150 % of the target concentration. The average percent recoveries of sofosbuvir and ledipasvir were determined.

A series of standard solutions (25 to 150 %) were prepared and peak areas were noted. A graph was plotted “peak area” versus “concentration” in linearity section. The results and linearity plots are shown in Table 1 and Figure 2A and B. Limit of detection (LOD) and limit of quantification (LOQ) were determined by using the formula mentioned in ICH guideline. 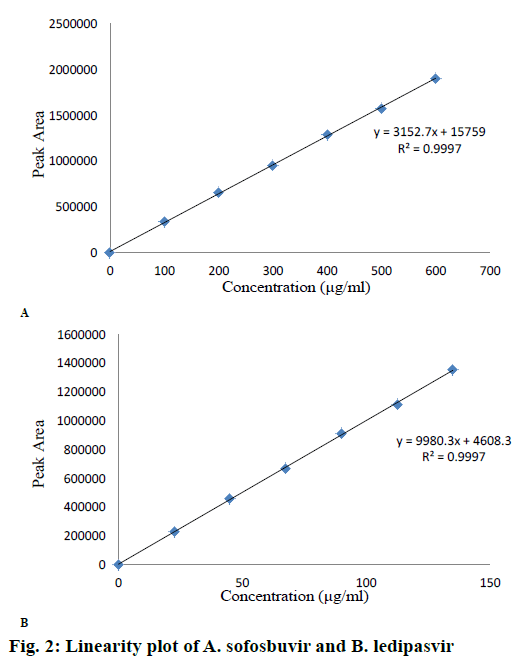 Figure 2: Linearity plot of A. sofosbuvir and B. ledipasvir

Ruggedness (% RSD) was conducted by analyzing the samples on different days. Robustness was evaluated by varying the optimum conditions with ±5 % of organic phase, ±0.2 ml/min of flow rate and ±5° of the column oven temperature. System suitability parameters were checked and if any parameter fails, the variations were narrowed and the allowable ranges of variations were established. The results were summarized in Table 2. The stability of drugs in solution was determined by analyzing the samples during the course of experimentation on the same day and also after storage of drug solution for 24 h. The results were summarized in Table 3.

Forced degradation studies [13-15] were performed under different stress conditions using standard stock solution (Table 4). Each 1 ml of standard solution was taken into three 10 ml volumetric flasks. Then 1 ml of hydrochloric acid (2 N), 1 ml of sodium hydroxide (2 N) and 1 ml of hydrogen peroxide (20 %) was added to each volumetric flask and refluxed for 30 min at 60°. These solutions were diluted to obtain concentration of standard solutions and their chromatograms were recorded to assess the stability of sample (Figure 3A-C). To assess the stress testing for thermal conditions standard solution was placed in oven at 105° for 6 h and for the photolytic conditions, the drug solution was exposed to UV light by keeping in UV chamber for 7 d or 200 Watt h/m2 in photo stability chamber. Then the resultant solutions were diluted to obtain concentration of standard solution and their chromatograms were recorded to assess the stability of sample (Figure 3D and E). The results are summarized in Table 2.

The objective of proposed study was to develop a stability indicating RP-HPLC method for the simultaneous quantitation of sofosbuvir and ledipasvir in bulk drug and tablet form. Initially, various mobile phase compositions were tried to elute the drug. Mobile phase ratio and flow rate were selected based on peak parameters, run time and resolution [16-19]. The standard solution in diluent (acetonitrile:water, 50:50v/v) was prepared and scanned in the UV range. 270 nm was selected as detection wavelength based on the overlay UV spectrum (Figure 4). The separation was done using Discovery C18, 250×4.6 mm, 5 μ column. The mobile phase 0.1 % OPA and acetonitrile (45:55 v/v) run in isocratic mode and flow rate 1.0 ml/min was selected. The retention times of sofosbuvir and ledipasvir were found to be at 2.08 and 3.06 min, respectively (Figure 5A-B). 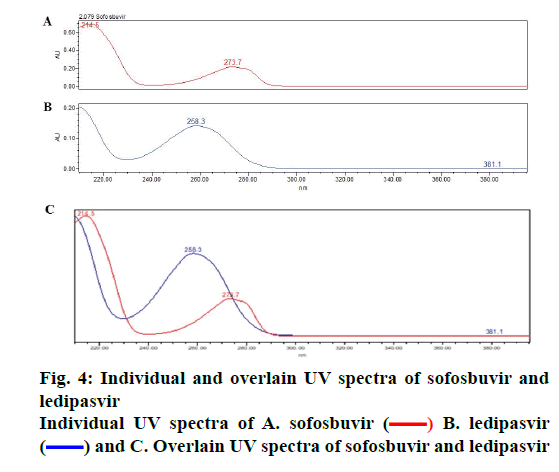 ) and C. Overlain UV spectra of sofosbuvir and ledipasvir 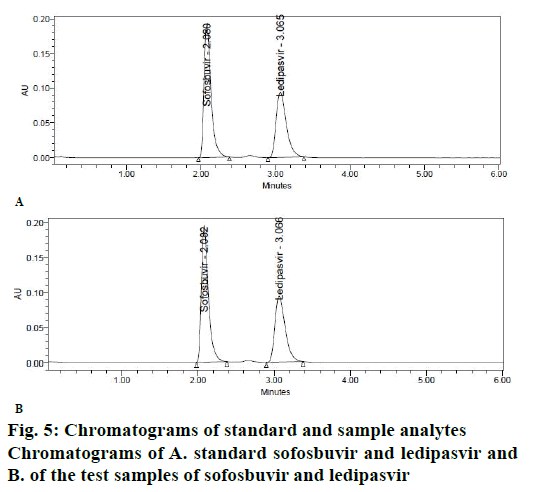 In the proposed study, stability-indicating RPHPLC method was developed for the simultaneous determination of sofosbuvir and ledipasvir in bulk drug and tablet form. The method was validated according to ICH guidelines and was found to be linear, precise, accurate, specific and robust. From the degradation studies conducted it is concluded that sofosbuvir and ledipasvir were more stable at more concentrations of acid, base, peroxide, thermal and UV stress study. The run time was 6 min, which enables rapid quantitation of many samples in quality control analysis of tablet formulations.