A simple, accurate and selective UV-spectrophotometric method was developed for the estimation of diacerein in bulk and pharmaceutical dosage forms. The method was developed and validated according to International Conference on Harmonization (ICH Q2 R1) guidelines. The developed method was validated statistically with respect to linearity, range, precision, accuracy, ruggedness, limit of detection and limit of quantitation. The study was carried out in citrate buffer pH 6.0 and λmax was found to be 258.8 nm. Pure drug concentration was prepared in the range of 1-10 μg/ml and the linear regression analysis data showed good linear relationship with an R2 value of 0.999. The limit of detection and limit of quantitation were found to be 0.675 and 1.189 μg/ml, respectively. Recoveries were found to be in the range of 100.815 to 101.744 % and % RSD was less than 2 %, which indicated that the developed method was accurate, precise, specific, rapid and suitable for the analysis of commercial samples.

Validation of an analytical procedure is defined as a process by which it is established that the performance characteristics of the procedure meet the requirements for the intended analytical applications in laboratory studies. The main objectives of any analytical measurement are to obtain consistent, reliable and accurate data. The results from method validation can be used to judge the quality, reliability and consistency of analytical results, which is an integral part of any good analytical practice [1]. The main parameters used for validation purpose are linearity and range, accuracy and precision, recovery, limit of detection and limit of quantitation.

Diacerein (DCN) is an anthraquinone derivative also known as diacetylrhein (Figure 1), which is chemically 4,5-diacetoxy-9,10-dioxo-9,10-dihydroanthracene- 2-carboxylic acid [2,3] and is official in the Indian Pharmacopoeia (IP). It is a semisynthetic compound, derived by di-acetylation of rhein, has antiinflammatory, analgesic and antipyretic activity. Due to these pharmacological activities, it is used in the treatment of osteoarthritis, rheumatoid arthritis, epidermolysis bullosa and psoriasis [4-7]. The drug is also categorized as a disease modifying agent, which is a selective inhibitor of interleukin-1β. It also provides a protective effect on granuloma-induced cartilage breakdown by reducing the concentration of proinflammatory cytokines [8-10]. It does not have any inhibitory effect on cyclooxygenase activity, due to which it does not affect prostaglandin synthesis and does not cause any gastroduodenal toxicity [10]. It also acts by stimulating the synthesis of proteoglycans and hyaluronic acid, the principle components of cartilage [11]. Metabolic by product of DCN is rhein with an anthraquinone ring, which also produces antiinflammatory effect by inhibiting interleukin-1β [12,13]. 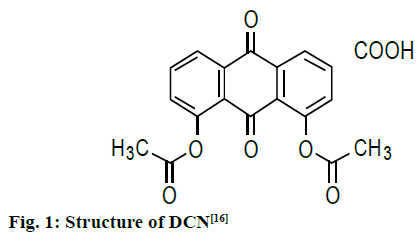 Literature survey revealed that DCN is unstable under basic stress conditions specifically with sodium hydroxide when kept at room temperature for 48 h [14], hence citric acid is used as a stabilizer in novel formulations [15,16]. No analytical method thus far has been reported for the estimation of DCN using citrate buffer pH 6.0 and acetonitrile as co-solvent in bulk and pharmaceutical dosage forms. In the preparation of phosphate buffer (IP), sodium hydroxide is one of the ingredients used in the chemical formula. Due to the stability issue citrate buffer of pH 6.0 was selected. An attempt has been made to develop a rapid, sensitive, precise and accurate UV spectrophotometric method by conducting systematic trials in the selected buffer for validation of pure drug in bulk and a capsule dosage form.

Standard sample of DCN was a generous gift sample from Ami Lifesciences, Gujarat (India). The marketed DCN capsules (Leecrin) containing 50 mg of DCN, manufactured by Allkind Healthcare (Himachal Pradesh, India) were purchased from market. All other chemicals used were of analytical grade. A double beam Systronics UV/Vis spectrophotometer, model UV-2201 (India) having a spectral bandwidth of 1 nm, wavelength accuracy of ±0.5 nm and a pair of 1 cm quartz cells was used to measure absorbance of the resulting solutions.

Accurately weighed quantity of 10 mg of DCN was transferred into 10 ml volumetric flask and then 1 ml acetonitrile was added as a co-solvent and sonicated on bath sonicator for 5 min. Then 5 ml citrate buffer pH 6.0 was added and again sonicated for 5 min. Finally, the volume was made up with citrate buffer pH 6.0. The prepared solution was found to be a clear solution with a strength of 1000 μg/ml.

One milliliter of the stock solution was taken in 100 ml volumetric flask and diluted up to the mark with citrate buffer pH 6.0 to get the sample stock solution having the strength of 10 μg/ml. Then further dilutions from 1-10 μg/ml were made. The standard solution of DCN (10 μg/ml) was scanned in the wavelength region of 200-400 nm (Figure 2) and the λmax was found to be 258.8 nm [17,18].

Linearity is defined by International Conference on Harmonization (ICH) as the ability of analytical procedure to obtain test results that are directly proportional to the concentration of analyte in the sample. Range of an analytical procedure is the interval from upper concentration to the lower concentration of analyte in the sample, which indicates that the followed analytical procedure has a suitable level of precision, accuracy and linearity [1,19]. To determine the linearity, 5 independent levels of calibration curve were analysed in the range of 1-10 μg/ml. Absorbance of each solution was recorded at 258.8 nm against citrate buffer pH 6.0. The calibration curve was plotted and correlation coefficient with regression line equation for DCN was determined. Determination of intra-day precision was done by analysing DCN (1-10 μg/ml) at three different time points of the same day and the determination of the inter-day precision was determined by analysing DCN (1-10 μg/ml) at three different time points on different days [1,19,20].

Accuracy of the method was determined by percent recovery experiments performed at 3 different levels such as 50, 100 and 150 %. Known amount of standard DCN solutions were added to the preanalysed sample solutions. Absorbance was recorded and % recovery was estimated by using calculated amount of drug in the following formula [1,21,22]. % Recovery = A–B/C×100, where, A represents total amount of drug estimated, B represents amount of drug found on pre-analysed basis, C represents amount of pure drug added. Ruggedness of the proposed method was evaluated by applying same developed procedure to assay 10 μg/ml of DCN by using the same instrument by 2 different analysts on different days under same conditions. The obtained results were evaluated for the reproducibility [1,23].

Limit of detection (LOD) and limit of quantification (LOQ):

Ten marketed capsules of DCN (Leecrin) containing 50 mg drug per capsule were taken and emptied in a pestle and mortar. Weighed amount of the powder, equivalent to 10 mg of DCN was transferred into the 10 ml volumetric flask, 1 ml acetonitrile was added as a co-solvent and sonicated on bath sonicator for 5 min. Then 5 ml citrate buffer pH 6.0 was added and again sonicated for 5 min, finally diluted up to the mark with citrate buffer pH 6.0 to produce a solution of 10 ml. The prepared solution was found to be a clear having the strength 1000 μg/ml, which formed the stock solution. From this stock solution 1 ml of solution was taken and transferred to 100 ml volumetric flask and diluted with pH 6.0 citrate buffer to get 10 μg/ml solution. From this solution, dilutions were prepared in the range 1-10 μg and were analysed at 258.8 nm [24].

Ten Leecrin capsules were taken and average weight was determined. Then contents were ground and mixed well. The powder of the sample equivalent to 10 mg of DCN was accurately weighed (49 mg powder) and transferred into 10 ml volumetric flask. Then 1 ml of acetonitrile was added and final volume was adjusted using citrate buffer pH 6.0, sonicated for 5 min to get a clear solution of strength 1000 μg/ml. Then the content of the flask was filtered using Whatman filter of pore size 0.45 μ. From this stock solution, 1 ml of solution was taken and transferred to 100 ml volumetric flask by adjusting the volume up to 100 ml, using citrate buffer pH 6.0, which gave a solution of 10 μg/ml strength. This solution was prepared 5 times and the absorbance of each solution was determined at 254.8 nm and the concentration of DCN present in sample solution was calculated, there by the drug present per capsule was calculated [18].

Statistical analysis was performed on obtained sample data (absorbance values of standard pure drug DCN and test samples prepared from market formulation Leecrin). Paired t-test was applied and hypothesis was tested at 5 % level considering that there is no significant difference between the standard plot of pure drug and calibration curve of Leecrin.

The linearity of DCN was found to be in the range of 1-10 μg/ml with linear correlation coefficient 0.999 (Figure 3A) and all the quantitative parameters were estimated is listed in Table 1. The % RSD was found to be in the range of 0.514-1.253 for intra-day precision and 0.996-1.738 for inter-day precision (Table 2). Accuracy of the method was checked by the recovery studies at three different levels, i.e., 50, 100 and 150 %. The mean of the recovery for DCN was found to be 101.238 % (Table 3). The obtained results listed in Table 4 were found to be reproducible, since there was no significant difference between analysts. Thus the proposed method was considered as rugged. The sensitivity of the method was assessed by determining the LOD and LOQ. The LOD and LOQ for DCN were found to be 0.675 and 1.189 μg/ml, respectively. The linearity of the calibration curve (Figure 3B) showed that the proposed method could be successfully used for analysing a pharmaceutical dosage form without any interference from common excipients, which was further confirmed from statistical analysis. 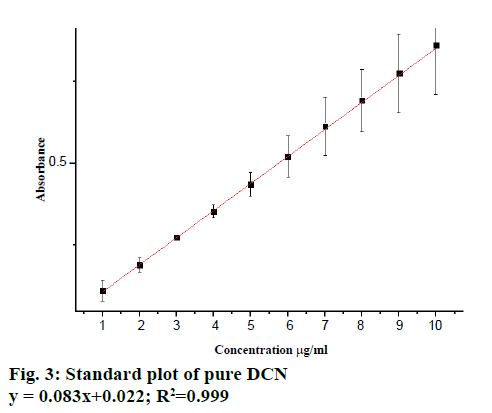 Table 4: Ruggedness of the method by two analysts on different days

The amount of DCN in the capsule formulation was accurately estimated with the developed method as shown in Table 5, hence indicating that the method could be effectively applied to analyse different pharmaceutical dosage forms of DCN.

The observed value of ‘t’ comes out to be 0.216, which was in the acceptance region in both one tailed as well two tailed test (two tailed test at 0.05 level of significance is 2.262 while level of significance for one tail test is 1.833 at 0.05) even at the lowest level (0.01) of significance corresponding to 9 degrees of freedom. Hence null hypothesis (H0) was rejected. It could be concluded that the method of validation is relevant as the difference is insignificant between the standard plot readings and calibration curve of pure drug and tested samples of Leecrin.

From the above results, it could concluded that the method developed for determination of DCN in bulk and a capsule dosage form was found to be simple, sensitive, accurate, precise, reproducible and economical. Purity of the drug peak was assessed by analysing the spectra, as shown in Figure 2. The R2 value of 0.999 and % RSD <2, indicated good results. The results obtained from interday precision provided evidence about the ruggedness of the analytical method due to the low value of % RSD. The lowest value of LOD, obtained by proposed method indicated that the followed method was highly sensitive. Small but calculated changes did not affect the method, which indicated that the proposed method was found to be robust. % RSD of pharmaceutical formulation was found to be 0.586 %, which showed that there was no interference from the excipients used in the formulation, which indicated the accuracy and reliability of the method. To ensure the specificity of developed method, 2 evaluation parameters (calibration and assay) were performed on Leecrin, which ensured that the developed method could be used for routine analysis for estimation of DCN in bulk and capsule dosage forms.