Oxitard capsules, a polyherbal formulation, is an effective natural antioxidant that prevents oxidative stress-related tissue damage and is helpful for coronary artery disease. The aim of the present work was systematic development and validation of the high-performance thin-layer chromatographic method for simultaneous quantitative estimation of mangiferin and gallic acid from oxitard capsules. Both markers, mangiferin and gallic acid were separated on a pre-coated silica gel 60 F254 thin-layer chromatographic plate, using toluene:ethyl acetate:formic acid:methanol (4:6:0.8:2 v/v/v/v) as mobile phase. The retention factor of mangiferin and gallic acid was found to be 0.28±0.03 and 0.78±0.03, respectively. The linear regression analysis data for the calibration plots of drugs scanned at isosbestic point 299 nm showed a good linear relationship with r2=0.9931 and r2=0.9901, over the concentration range of 300 to 700 ng/spot and 500 to 900 ng/spot for mangiferin and gallic acid, respectively. The validation parameter followed for simultaneous estimation of these polyherbal drugs were linearity, precision, accuracy, robustness, ruggedness and sensitivity (limit of detection and limit of quantitation). The method was found to be precise, accurate, sensitive and robust meeting all the parameters as per International Council for Harmonisation guideline Q2 (R1). Thus, the developed high-performance thin-layer chromatography method can conveniently be employed for simultaneous detection and quantification of mangiferin and gallic acid in commercial polyherbal formulation.

Herbal medicines have existed since the prehistoric period worldwide with long recorded history. They were used in ancient Chinese, Greek, Egyptian and Indian medicine for different therapies purposes; whereas the Native Americans and African use herbs in their healing rituals as a part of their culture. Due to the scientific evolution today, more and more pharmacologically active ingredients of the Ayurvedic medicines as well as their usefulness in drug therapy have been identified. The desired healing effect of herbals are obtained from the phytochemical constituent present in it, such as saponins, tannins, alkaloids, alkenyl phenols, flavonoids, terpenoids, phorbol esters and sesquiterpenes lactones. Polyherbalism gives some benefits because of its synergic effect which is not available in a single herbal formulation[1].

Mangiferin is a C-glucosyl xanthone present in considerable levels in higher plants and different parts of the mango fruit, such as the peel, stalks, leaves, barks, kernel and stone[3]. Numerous studies confirm that mangiferin, through different mechanisms, has various biological activities such as anti-cancer[4], antioxidant[5], anti-inflammatory, anti-diabetic[6], cardiovascular protection[7], neuroprotective[8], antiviral, enhanced immunity, gastroprotective effect, analgesic activity and radioprotection, as seen in the experiments on mice. The neuroprotective effect was patented, also anti-allergic properties and hepatoprotective activity have been published[9]. Gallic acid, a phenolic compound, also known as 3,4,5-trihydroxybenzoic acid, is a naturally occurring secondary metabolite found in various plants, vegetables, nuts and fruits[10]. Gallic acid can be useful as an additive in the food industry as it can inhibit the oxidation and rancidity of oils and fats ascribed to their free radical scavenging and antioxidant nature. Besides the edible uses of gallic acid and its ester derivatives such as lauryl gallate, propyl gallate, octyl gallate, tetradecyl gallate and hexadecyl gallate, as flavoring agents and preservatives in the food industry, there are various pharmacological activities of these phytochemicals, with emphasis on antioxidant[11], antimicrobial[12], anti-inflammatory[13], anticancer[14], cardioprotective, gastroprotective and neuroprotective effects[15].

The High Performance Thin Layer Chromatography (HPTLC) system used consisted of a Camag Linomat V sample applicator containing a 100 µlHamilton syringe. The samples and standard solutions of markers were spotted in the form of bands (6 mm width) at the bottom of the chromatographic plates at a distance of 10 mm. Aluminum Thin Layer Chromatography (TLC) plates (10×10 cm, 250 mm thickness Merck) precoated with silica gel 60 F254 were used for spotting. The slit dimension was kept at 5×0.45 mm and a scanning speed of 10 mm/s. Analysis was carried out using Camag TLC scanner-III for scanning at 299 nm, which was found to be the absorptive wavelength of both mangiferin and gallic acid. Camag WinCATS software was used for application and scanning. Camag glass twin-trough a glass chamber (10×10 cm) saturated with mobile phase was used for the development of the plates. The mobile phase consisted of toluene:ethyl acetate:formic acid:methanol (4:6:0.8:2 v/v/v/v) was used for chromatogram development in the ascending mode to the migration distance of 90 mm. Before the study, the chamber was saturated with the mobile phase for 20 min at room temperature.

A separate stock solution of mangiferin and gallic acid was prepared by dissolving 10 mg of precisely weighed marker in a 10 ml volumetric flask with methanol to get a 1000 ppm stock solution. From this stock solution, working solutions were prepared by accurately diluting aliquots of the stock solution. 10 capsules were taken and weighed precisely and individually and the amount of capsule content equivalent to 10 mg of extract of amra kernel and 10 mg of powder of amalaki fruit was dissolved separately in 10 methanol followed by sonication for 30 min. This solution was filtered through whatman filter paper no. 42 and then the volume was made up to 10 ml using methanol.

Validation of the developed method was carried out according to the ICH guidelines Q2 (R1). The parameters checked were linearity, specificity, Limit Of Detection (LOD), Limit Of Quantification (LOQ), precision, accuracy (recovery) and robustness. The linearity of an analytical procedure is its ability (within a given range) to obtain test results that are directly proportional to the concentration (amount) of analyte in the sample. Linearity was observed by the plotting graph of drug concentration against peak area for each standard.

The precision of an analytical procedure expresses the closeness of agreement (degree of scattering) between a series of measurements obtained from multiple sampling of the same homogeneous sample under the prescribed conditions. The present method was validated for intraday and interday precision. Intraday precision was determined in triplicate with the same method on the same day for three different concentrations of mangiferin (300, 500 and 700 ng/spot) and gallic acid (500, 700 and 900 ng/spot). The interday precision of the method was done by performing a similar method on different days under the same set of experimental situations. The results were reported as percent Relative Standard Deviation (% RSD).

The accuracy of an analytical procedure expresses the closeness of agreement between the value which is accepted either as a conventional true value or an accepted reference value and the value found. Recovery studies were carried out using the addition of standard methods. Known concentrations of the sample were applied and then spiked with 80, 100 and 120 % w/w amount of analyte in triplicate and the accuracy was calculated as percent of analyte recovered.

The robustness of an analytical procedure is a measure of its capacity to stay unchanged by small, but deliberate variations in method parameters and indicates its reliability during normal usage. The robustness was studied in triplicate at 300 and 700 ng/spot for mangiferin and 500 and 900 ng/spot for gallic acid by deliberately making small changes in the mobile phase composition (3.8:5.8:0.8:2 v/v/v/v) and (4.2:6.2:0.8:2 v/v/v/v) and change in saturation time (20±5 min).

The sensitivity of this method was studied in terms of LOD and LOQ. The LOD of an analytical procedure is the lowest amount of analyte present in a sample which can be detected but not necessarily quantitated as an exact value. The Detection Limit (DL) may be expressed as DL=3.3 standard deviation/slope of the calibration curve (σ/S). The LOQ of an analytical procedure is defined as the lowest amount of analyte within a sample which can be quantitatively determined with suitable precision and accuracy. The Quantitation Limit (QL) may be expressed as QL=10 σ/S.

Fig. 2: HPTLC densitogram of standard mangiferin and gallic acid at Rf 0.28 and 0.78, respectively

Note: n=3 represents each is an average of three observations

Note: Each result is an average of three observations. Concentration levels used for a precision parameter was 300, 500, 700 ng/spot for mangiferin and 500, 700, 900 ng/spot for gallic acid 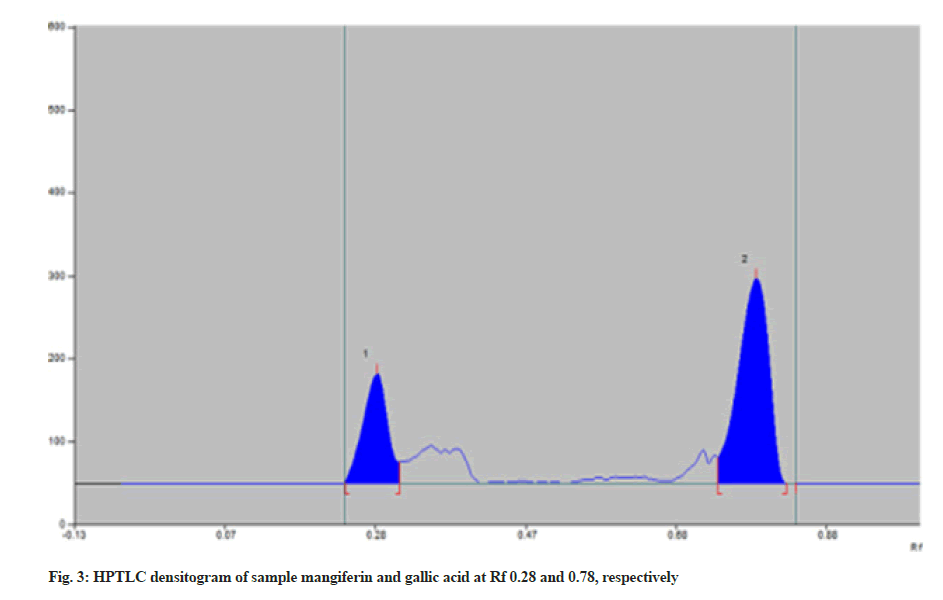 Fig. 3: HPTLC densitogram of sample mangiferin and gallic acid at Rf 0.28 and 0.78, respectively

A rapid, precise, accurate and sensitive HPTLC method was successfully developed for simultaneous estimation of mangiferin and gallic acid in the oxitard capsules. The developed method was validated as per ICH Q2 (R1) guidelines. This method can also be used for the standardization of other formulations containing these phytoconstituents.