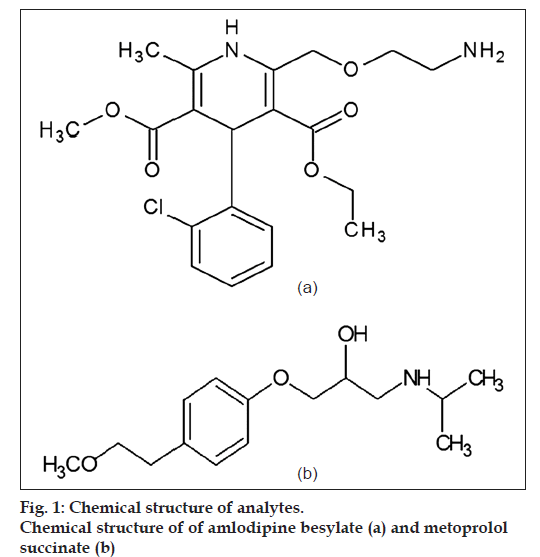 For estimating AMB, methods have been reported using HPLC, HPTLC and UV spectrophotometry alone or in combination with other drugs [6‑11]. Various methods have been reported for the analysis of MTS in bulk and in pharmaceutical formulation such as those using HPLC, ultra performance liquid chromatography (UPLC) with different column materials and mobile phase systems [12‑16]. This method developed has chosen over the reported HPTLC method owing to a better mobile phase composition of the method reported [17].

Literature review revealed that no HPTLC method has been reported for estimation of AMB and MTS as single components or as a mixture. The present study reports development and validation of a simple, accurate, economical and reproducible method for the analysis of AMB and MTS using HPTLC at 254 nm either as bulk drug mixture or in combined tablet dosage form.

The samples were spotted in the form of bands of width 6 mm with 100 μl sample syringe on precoated silica gel aluminium plate 60 F254 (10×10 cm, E Merck, Darmstadt, Germany) using a Camag Linomat 5 (Switzerland) sample applicator. The plates were prewashed with methanol and activated at 110° for 5 min, prior to chromatography. A constant application rate of 150 nl/sec was employed and space between two bands was maintained at 14 mm. The slit dimension was kept at 6×0.45 mm. The mobile phase consists of toluene:ethyl acetate:methanol:triethylamine (4:1:1:0.4 v/v/v). Linear ascending development was carried out in 10×10 cm twin trough glass chamber. The optimized chamber saturation time for mobile phase was 30 min, at temperature (25±2°) and relative humidity (60±5%); the length of chromatogram run was 8 cm and TLC plates were air‑ dried. Densitometric scanning was performed on a Camag TLC Scanner 3 equipped with winCATS software version 1.3.0 at 254 nm. The source of radiation utilized was deuterium lamp. Evaluation was performed using peak area with linear regression.

An accurately weighed quantity (10 mg) of AMB and 95 mg of MTS were transferred to 10 ml volumetric flask containing 4 ml methanol and volume was adjusted to mark with methanol to obtain a concentration of 1000 ng/µl of AMB and 9500 ng/µl of MTS. Dilutions were prepared from the stock solution of AMB and MTS. For AMB linearity range employed was 400‑1400 and for MTS 3800‑13300 ng/spot.

Twenty Metpure AM 2.5 (25 mg MTS + 2.5 mg AMB) tablets were weighed and powdered in a glass mortar. An amount of powder equivalent to 2.5 mg of AMB and 23.75 mg of MTS was transferred to 25 ml volumetric flask, extracted with methanol for 20 min by shaking mechanically. The solution was diluted to volume with the same solvent and filtered. A sample solution of 6 µl was spotted on TLC plate followed by development and scanning as described in instrumentation and HPTLC condition section. The concentration of drugs was determined from linear regression equations and % label claim was calculated. The developed method was validated in terms of linearity, specificity, precision, accuracy, robustness and ruggedness [18].

In this study, quantitative determination of AMB and MTS in tablets was performed by a HPTLC method. The HPTLC developed was found to be simple, rapid and sensitive, which did not require any pretreatment procedure. Typical overlain spectra of AMB and MTS were shown in fig. 2. Also the typical HPTLC Chromatogram obtained from the analysis of standard AMB (Rf = 0.39) and MTS (Rf = 0.59) was shown in fig. 3. The peak purity of AMB and MTS were found to be 0.999 and 0.998, respectively indicating that no impurities or degradation products were found along with the peaks of standard drug solutions, hence making the method specific. Regression analysis for the HPTLC method was carried out (Tables 1 and 2) and a highly linear calibration graph (r2 = 0.999) indicated adherence of the method to Beer’s law. Quantitative determination of AMB and MTS in tablets using this HPTLC method indicated good agreement with the labeled amount of AMB and MTS (Table 3). Closeness of the amount found to the amount taken and the low coefficient of variation value showed that the proposed method was accurate and precise. Recovery study conducted by the HPTLC method was performed by spiking 80, 100 and 120 % of additional drug recovery of 99.48‑100.87% for AMB and 99.85‑100.88 as listed in Table 4. The method was found to be precise based on the results obtained in the intra‑day and inter‑day precision evaluation study. These results were expressed in terms of % RSD that was found to be less than 2 (Table 5). High recovery values followed by low % RSD value (<2) coupled with low standard deviation makes the proposed method highly suitable for accurate and precise determination of AMB and MTS in combined tablet dosage forms. Repeatability was determined by spotting 8 µl of standard solutions on a TLC plate. After developing the plate, separated spots of AMB and MTS were scanned six times without changing position of the plate and RSD for measurement of peak area was calculated, which was found to be 0.9391 and 0.8947% for AMB and MTS, respectively (Table 6). 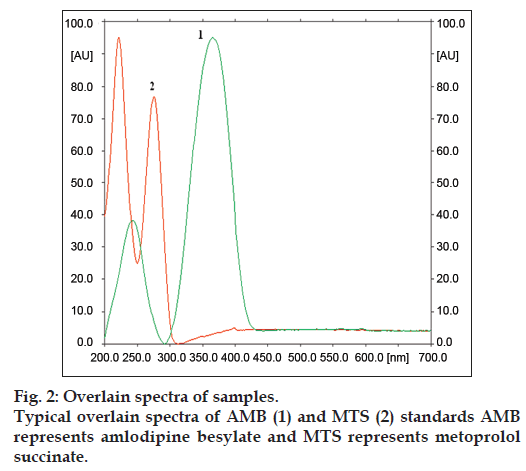 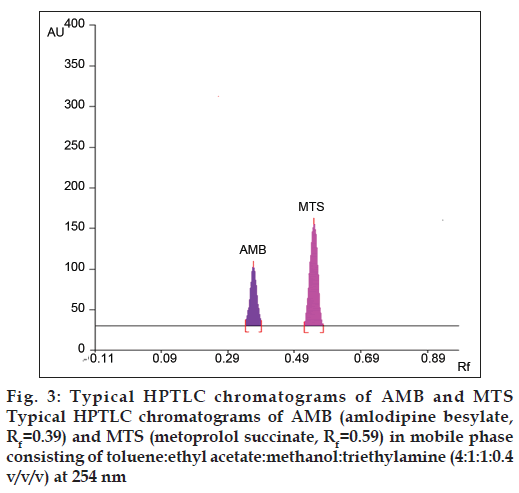 Table 1: Statistical Analysis For The Calibration Curves Of Amb And Mts

Table 2: Determination Of Amb And Mts In Tablet Formulation

Table 3: Recovery Analysis Of Amb And Mts In Tablets

The results of ruggedness and robustness evaluation were shown in Table 7.

The developed HPTLC technique is found to be precise, specific, accurate and stability indicating. The developed method was validated based on ICH guidelines. Statistical analysis indicated that the method is repeatable and selective for the analysis of AMB and MTS both in bulk drug mixture and in tablets.

The developed method appears to be useful for determining purity of these drugs available from various sources. It is necessary to evaluate this method further in degradation kinetics of AMB and MTS and also for estimating these drugs in plasma and other biological fluids. In conclusion, the proposed HPTLC method is suitable for the analysis of amlodipine besylate and metoprolol succinate in commercial tablets.

We thank the Principal, R. C. Patel Institute of Pharmaceutical Education and Research, Shirpur for providing the facilities to carry out the research work.