A simple, accurate, precise and sensitive reverse-phase high-performance liquid chromatography method for the determination of citicoline sodium has been developed and validated. Drug was resolved on a C18 column (Phenomenex Luna, 250×4.6 mm, 10μ), utilizing mobile phase of potassium dihydrogen phosphate buffer and acetonitrile in a ratio of 30:70. Mobile phase was delivered at the flow rate of 1.0 ml/min and detection was carried out at 272 nm. Separation was completed within 2.22 min. Calibration curve was linear with good correlation coefficient (R 2 =0.999) over a concentration range 10-60 μg/ml. Recovery was between 98.84 and 101.76%. Method was found to be reproducible with relative standard deviation for intra and interday precision of <2.0% over the said concentration range. The method was successfully applied to the determination of the citicoline sodium, it can be very useful and an alternate to performing the stability studies.

Citicoline is a brain chemical that occurs naturally in the body. The scientific name for citicoline is cytidine–5–diphosphocholine. Citicoline is degraded to uridine and choline during intestinal absorption. These two compounds then pass through the blood brain barrier to reconstitute citicoline in the brain.

Citicoline is often called as brain nutrient because it increases levels of several neurotransmitters including acetylcholine, dopamine and noradrenaline; helps to maintain the integrity of neuronal cell membranes; and increases energy production in the frontal cortex. It’s also used for the Alzheimer’s disease and other types of dementia, head trauma, cerebrovascular disease such as stroke, age–related memory loss, Parkinson’s disease, and glaucoma. Citicoline is available in oral and parenteral formulation[1]. Very few methods for analysis of citicoline sodium are reported in the literature. Those reported include high performance liquid chromatography[2-4].

The aim of the present work was to develop a relatively simple, validated, sensitive, reliable, and inexpensive HPLC method for the determination of citicoline sodium and its degraded products.

To study the accuracy of the method and to check the interference from excipients, recovery studies were carried out by the addition of standard drug solution to sample at 3 different levels (80%, 100% and 120%) of the test concentration. The first recovery study was conducted on the excipients mixture (placebo) prepared by adding accurately weighed amounts of citicoline sodium to the excipient mixture and calculating the percentage recovery in each case.

Precision of the method was checked by repeatability of intraday and interday assay. The intra– assay precision (repeatability) and accuracy were studied by analysing repeatedly six replicate concentration of 100% of citicoline sodium on one laboratory on the same day, three different concentration levels (300, 400 and 500 μg/ml). The interday precision (reproducibility) and accuracy were studied by analysing the different concentration levels (350, 400, 450, 500, 550 and 600 μg/ml) of citicoline sodium over 3 days and results were expressed as a relative standard deviation percentage (RSD %).

System suitability testing is used to verify that the resolution and reproducibility of the system are adequate for the analysis to be performed. Parameters such as theoretical plates; tailing factors; resolution and reproducibility (% RSD for retention time and for the area of six replicates) are determined and compared against the specifications.

Various mobile phases were used containing acetonitrile, methanol, sodium and potassium phosphate buffers. Literature revealed that, potassium and sodium buffer solution mix with methanol with a ratio of 100:2 or 95:5 respectively were preferred as it is used as mobile phase used for resolved citicoline sodium.

The use of 0.05 M potassium dihydrogen phosphate mixes with acetonitrile with a ratio of 30:70 respectively as mobile phase (pH 3.00±0.05) revealed good resolution and peak shape for citicoline sodium[5]. On the other hand UV absorption spectra of citicoline sodium in the range 200–400 nm showed maximum absorbance at 272 nm (fig. 1). Therefore, the above mentioned parameter was selected as detection wavelength. Flow rate of 1.0 ml/min provided run time of about 2.22 min and was used as flow rate. C18 is common stationary phase suitable for many pharmaceuticals and was found to be suitable in this case (Table 1).

The linear relationship was observed when plotted peak area versus concentration over the range of 10–60 μg/ml. The linearity was expressed as the correlation coefficient and found to be 0.999. The method was validated for various parameters as per International Conference on Harmonisation (ICH) guidelines. The results of method validation are shown in Table 2. 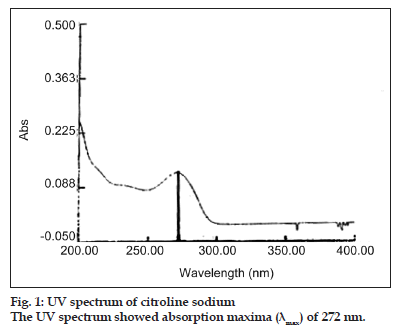 TABLE 4: Determination Of Citicoline Sodium In Tablets And Comparison With Reference Method; *Reference method was UV method developed in the laboratory, **recovery amount was the average of five determinants, UV=ultraviolet. 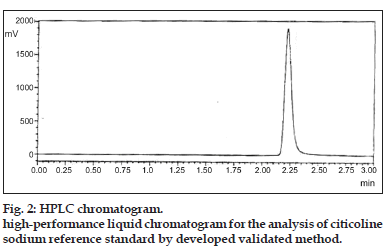 As per ICH guidelines, for assay procedure of active substance or finished product, range should be 80–120% of the test concentration. Results of recovery studies ranged from 98.84 to 101.87 are shown in Table 3, indicating very good reproducibility of these methods. The excipients used in the mixture did not interfere in the analysis.

Robustness studies were carried out after change of flow rate, wavelength of detection, column temperature and mobile phase composition. It was observed that the small changes in this parameters, did not lead to changes of retention times of peak of interest.

The developed and validated method was applied to the determination of citicoline sodium in two brands of tablets containing citicoline sodium 500 mg, which is available in the local market using the procedure described earlier. Evaluation was performed using the calibration curve method since no significance difference between the slopes of the calibration curves for standards and tablet extracts was observed. The results obtained by the proposed method were statistically compared with those of the reference method by applying the student’s t–test for accuracy and F–test for precision. As shown by the results compiled in Table 4, the calculated t–value and F–values did not exceed the tabulated values, t=2.77 and F=6.39 at the 95% confidence level for 4° of freedom suggesting that the proposed method and the reference method (UV method) do not differ significantly with respect to accuracy and precision.

It can be concluded that the proposed method is fully validated and is found to be simple, sensitive, accurate, precise, reproducible, and relatively inexpensive giving an acceptable recovery of the analyte. The method was specific to drug. The advantage of this method is short retention time and cost effective mobile phase over the other method to gives better result.