Cefpodoxime proxetil (CEF) is chemically 1-(isopropoxy carbonyloxy) ethyl (6R,7R)-7-[2-(2- amino-4-thiazolyl)-(z)-2-(methoxyimino) acetamido]- 3-methoxymethyl-3-cephem-4-carboxylate[1], is a third generation cephalosporin anti-biotic. It is used for infections of the respiratory tract, urinary tract and skin and soft tissues. It has greater activity against Staphylococcus aureus[2]. CEF is official in IP[3] and USP[4], which describes liquid chromatography method for its estimation. Literature survey reveals the highperformance thin layer chromatography (HPTLC)[5] method for the determination of CEF individually. Literature survey also reveals the reversed-phase high-performance liquid chromatographic (RP-HPLC) [6] and spectrophotometric[7] methods for determination of CEF with other drugs. Dicloxacillin (DCX) is chemically 9 (2S,5R,6R)-6-[3-(2,6-dichlorophenyl)- 5-methyl-1,2-oxazole-4-amido]-3,3-dimethyl-7-oxo-4- thia-1azabicyclo[3.2.0] heptane-2-carboxylic acid[8], and is a penicillinase resistant penicillin, used in the treatment of bacterial infections such as pneumonia and bone, ear, skin and urinary tract infection[9]. It is official in IP[10] and USP[11], and describe RP-HPLC method for its estimation. Literature survey reveals HPLC[12] method for determination of DCX in pharmaceutical dosage forms as well as in biological fluids. Literature survey also reveals spectrofluorimetric[13] and RP-HPLC[14-16] methods for determination of DCX with other drugs.

Preparation of solutions and reagents

A solution containing acetonitrile, methanol and water in the proportion of 20:50:30 v/v/v was used as diluent for the proposed method. A mixed standard stock solution of CEF (1.0 mg/ml) and DCX (1.0 mg/ml) was prepared by accurately weighing CEF (25 mg) and DCX (25 mg) and dissolving in diluent and make up to 25 ml with diluent in the 25 ml volumetric flask. An aliquot of 1.0 ml of stock solution was transferred in 10 ml volumetric flask and adjusted up to the mark with diluent having concentration (100 µg/ml).

To optimize the RP?HPLC parameters, several mobile phase compositions were tried. A satisfactory separation and good peak symmetry for CEF and DCX was obtained with a mobile phase ACN:MeOH:TFA (0.001%) with pH 6.5 (30:50:20 v/v/v) at a flow rate of 1.0 ml/min to get better reproducibility and repeatability. Quantification was carried out at 235 nm based on peak area. Complete resolution of the peaks with clear baseline was obtained (fig. 1). System suitability test parameters for CEF and DCX for the proposed method are reported in Table 1.

The proposed method has been validated for the simultaneous determination of CEF and DCX in tablet dosage form[17]. Calibration curves were constructed by plotting peak areas versus concentrations of CEF and DCX, and the regression equations were calculated. The calibration curves were plotted over the concentration range 0.5?20 µg/ml for CEF and 5?50 µg/ml for DCX. Accurately measured working standard solutions of CEF (0.05, 0.1, 0.5, 1.0, 1.5 and 2.0 ml) and measured working standard solution of DCX (0.5, 1.0, 2.0, 3.0, 4.0 and 5.0 ml) were transferred to a series of 10 ml of volumetric flasks and diluted to the mark with diluent. Aliquots (20 µl) of each solution were injected and analysed under the operating chromatographic conditions described as above. Regression parameters are mentioned in Table 2. 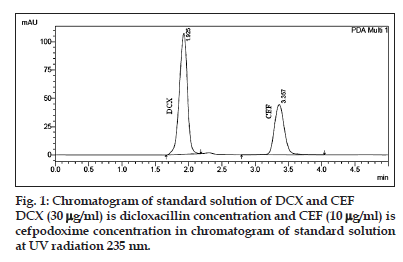 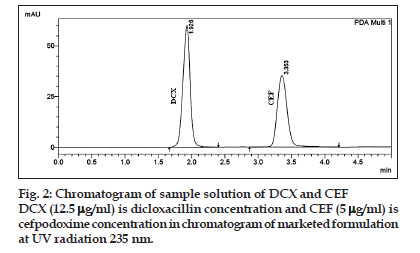 Specificity of the method was confirmed from the resolution factor and peak purity data of the analyte. The resolution factor obtained for the CEF and DCX from the nearest resolving peak was >2 in all samples. The standard chromatogram of CEF and DCX display good resolute peak (fig. 1) and no interference from excipients present in the formulation indicate specific nature of the method (fig. 2). The peak purity data of the CEF and DCX show that no other excipient is coeluted with the drug and the peak of the drug is pure in nature. The recovery experiment was performed by the standard addition method. The mean recoveries obtained were 99.77±0.89 and 99.94±0.45% for CEF and DCX, respectively (Table 2). The low value of standard deviation indicates that the proposed method is accurate. Results of recovery studies are shown in Table 3.

The difference in the initial value of percentage assay and the values obtained at 0, 12, 24 and 48 h of percentage assay should not be more than 2.0%. The assay obtained at different time intervals were compared with the initial assay values. Solution stability period for sample solution and standard solution was determined. Standard and sample solutions were stable till 48 h. Solution stability period for standard preparation and sample preparation were found to be within the acceptance criteria.

The proposed validated method was successfully applied to determine CEF and DCX in their tablet dosage form. The amount found to be 201.1±2.62 and 501.45±2.61 mg/tablet for CEF and DCX, respectively. The result obtained for CEF and DCX was comparable with the corresponding labelled amounts (Table 5). The RP?HPLC chromatogram for CEF and DCX of sample was recorded and shown in fig. 2.

The recovery experiment was performed by the standard addition method. The mean recoveries were 99.77±0.89 and 99.94±0.45 for CEF and DCX, respectively (Table 2). The results of recovery studies indicate that the proposed method is highly accurate. The proposed validated method was successfully applied to determine CEF and DCX in their tablet dosage form. The results obtained for CEF and DCX were comparable with the corresponding labelled amounts (Table 3). No interference of the excipients with the absorbance of interest appeared; hence, the proposed method is applicable for the routine simultaneous estimation of CEF and DCX in pharmaceutical dosage forms.

A simple, linear, accurate, specific and selective RP?HPLC method was developed and validated for estimation of CEF and DCX in their combined dosage form. In this proposed method the linearity is observed in the concentration range of 0.5?20 µg/ml for CEF and 5?50 µg/ml for DCX with coefficient of correlation, (r2)=0.9996 and (r2)=0.9987 for CEF and DCX, respectively at 235 nm. The result of the analysis of pharmaceutical formulation by the proposed method is highly reproducible and reliable and it is in good agreement with the label claim of the drug. The method can be used for the routine analysis of the CEF and DCX in combined dosage form without any interference of excipients.