A rapid and sensitive RP-HPLC method with UV detection (244 nm) for routine analysis of montelukast sodium and ebastine in a pharmaceutical formulation (Ebast-M) was developed. Chromatography was performed with mobile phase containing a mixture of methanol:acetonitrile:ammonium acetate (80:10:10, % v/v/v), pH of mobile phase was adjusted 5.5 using glacial acetic acid and flow rate was 1.2 ml/min. The method was validated for linearity, accuracy, robustness and intermediate precision. The linearity was established over the concentration range of 0.01−0.06 mg/ml for both drugs. The correlation coefficients (r 2) for ebastine and montelukast were 0.9989 and 0.9955, respectively. Statistical analysis of the data showed that the method was precise, accurate, reproducible and selective for the analysis of ebastine and montelukast drugs. The method was successfully employed for the determination of ebastine and montelukast in commercially available tablet dosage form.

Montelukast Sodium (MNK) chemically, (S, E)−2−(1−((1−(3−(2−(7−chloroquinolin−2−yl) vinyl) phenyl) 3−(2−(2−hydroxypropan−2yl) phenyl) propylthio) methyl) cyclopropyl) acetic acid[1,2] is a cysteinyl leukotriene receptor antagonist used for the maintenance treatment of asthma and to relieve symptoms of seasonal allergies[3−5]. Literature survey reveals that assay of MNK in bulk and tablet dosage form is official in Indian Pharmacopoeia 2010[6]. Ebastine (EBA), chemically, 4−(4−benzhydryloxy−1−piperidyl)−1−(4−tert−butylphenyl) butan−1−one is a nonsedating H1 antihistamine. Assay of ebastine in bulk form is official in British Pharmacopoeia[7]. Literature survey reveals that analytical methods, including UV spectrophotometer, and HPLC methods, are available for the determination of montelukast in pharmaceutical dosage forms. The analytical methods reported for estimation of MNK and EBA alone and with other drug combination are UV spectrophotometry[8−11], HPLC[12−14], HPLC/PDA[15], LC−MS[16] and HPTLC[17−19] methods. The combination of MNK and EBA has recently been introduced into the market. However, so far, no method was reported for the simultaneous estimation of MNK and EBA, in combination. The proposed method is rapid, simple, accurate and reproducible, and can be successfully employed in the routine analysis of both these drugs simultaneously, in tablet dosage form. The proposed method is optimised and validated as per the ICH guidelines[20]. In the present work, a successful attempt has been made to estimate both these drugs simultaneously using RP−HPLC method. This study attempts to describe a rapid and sensitive HPLC method with UV detection, useful for routine quality control of MNK and EBA in pharmaceutical formulation. The structure of MNK and EBA was depicted in fig. 1.

A pure drug MNK was obtained as gift sample from Alembic Pharmaceuticals, Vadodara and EBA was procured as gift sample from Kivi Labs Pvt, Vadodara. Methanol AR was used as solvent. Calibrated glassware was used throughout the work. The marketed formulation studied was Ebast−M tablets manufactured by Micro Labs Pvt Ltd. Each tablet contains 10 mg MNK and 10 mg EBA.

Ten tablets were weighed and crushed to obtain a fine powder. An accurately weighed tablet powder equivalent to about 10 mg of MNK and 10 mg of EBA was transferred to 100 ml volumetric flask and dissolved in 50 ml of mobile phase. The volume was made up to the mark using mobile phase as solvent. The resulting solution was filtered through vacuum filter and 2 ml of this filtrate was appropriately diluted to get concentration of 20 μg/ml of MNK and 20 μg/ml of EBA.

UV spectrum of both the standard solutions was taken separately. After overlay, it was found that at 244 nm both drugs showed same absorbance (isobestic point); hence 244 nm was selected as analytical wavelength for both drugs. The standard solution of MNK and EBA were scanned under the chromatographic condition described above.

The calibration curve was plotted with six concentrations of 10−60 μg/ml for MNK and EBA. The curve was repeated thrice for each dilution. The linearity was evaluated by linear regression analysis, which was calculated by the least square regression method. Before injecting solutions, the column was equilibrated for at least 30 min with the mobile phase flowing through the system. Peak area was recorded for all the solutions. The correlation graph was constructed by plotting the peak area obtained at the optimum wavelength of detection versus the injected amounts.

Figure 1:Chemical structures of the analytes. (a) Montelukast sodium, (b) ebastine. 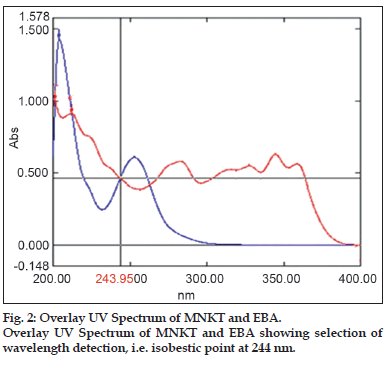 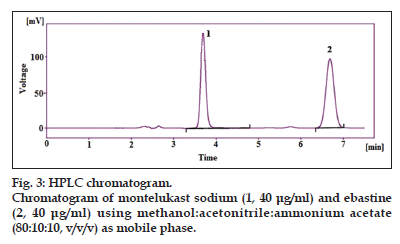 The authors thank to Alembic Pharmaceuticals, Vadodara and Kivi Labs, Vadodara for providing gift samples of standards of montelukast sodium and ebastine, respectively.