A stability-indicating reverse phase high performance liquid chromatography method was developed and validated for cefixime and linezolid. The wavelength selected for quantitation was 276 nm. The method has been validated for linearity, accuracy, precision, robustness, limit of detection and limit of quantitation. Linearity was observed in the concentration range of 2-12 μg/ml for cefixime and 6-36 μg/ml for linezolid. For RP-HPLC, the separation was achieved by Phenomenex Luna C 18 (250×4.6 mm) 5 μm column using phosphate buffer (pH 7):methanol (60:40 v/v) as mobile phase with flow rate 1 ml/min. The retention time of cefixime and linezolid were found to be 3.127 min and 11.986 min, respectively. During force degradation, drug product was exposed to hydrolysis (acid and base hydrolysis), H 2 O 2 , thermal degradation and photo degradation. The % degradation was found to be 10 to 20% for both cefixime and linezolid in the given condition. The method specifically estimates both the drugs in presence of all the degradants generated during forced degradation study. The developed methods were simple, specific and economic, which can be used for simultaneous estimation of cefixime and linezolid in tablet dosage form. 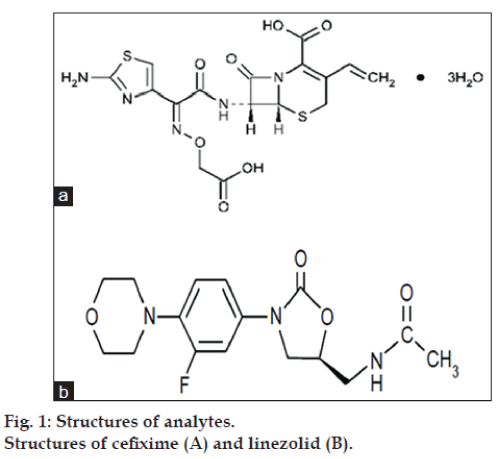 CEF and LIN combination tablet is a recently introduced antibacterial combination in Indian market. Literature survey reveals that many analytical methods are reported for determination of CEF [6‑17] and LIN [18‑21] individually. Also literature survey reveals that spectrophometric methods for combined dosage form [22‑24]. However, no method is reported for simultaneous estimation of these two drugs by reverse phase HPLC.

The International Conference on Harmonization (ICH) guideline entitled “Stability testing of new drug substances and products” requires that stress testing be carried out to elucidate the inherent stability characteristics of the active substance [25]. An ideal stability‑indicating method is one that resolves the drug and its degradation products efficiently. Consequently, the implementation of an analytical methodology to determine CEF and LIN simultaneously, in presence of its degradation products is rather a challenge for pharmaceutical analyst. Therefore, it was thought necessary to study the stability of CEF and LIN under acidic, alkaline, oxidative, UV and photolytic conditions. This paper reports validated stability‑indicating HPLC method for simultaneous estimation of CEF and LIN in presence of their degradation products. The proposed method is simple, accurate, reproducible, stability‑indicating and suitable for routine determination of CEF and LIN in combined dosage form. The method was validated in compliance with ICH guidelines [26,27].

Phosphate buffer, pH 7 was prepared by taking 50.0 ml of 0.2 M potassium dihydrogen phosphate in a 200 ml volumetric flask, to which 29.1 ml of 0.2 M sodium hydroxide was added and diluted further to the required volume with water. Six hundred millilitres of phosphate buffer pH 7 and 400 ml of methanol were mixed, sonicated for 10 min and filtered through 0.45 μm membrane filter and used as mobile phase.

Stock solutions were prepared by weighing 5 mg each of CEF and LIN. The weighed drugs were transferred to two separate 50 ml volumetric flasks. Volumes were made up to the mark with mobile phase to obtain a solution containing 100 μg/ml of CEF and LIN. The HPLC analysis was performed on reversed‑phase high‑performance liquid chromatographic system with isocratic elution mode using a mobile phase of methanol: phosphate buffer pH 7 (40:60 v/v) on a Phenomenex Luna C18 column (250×4.6 mm, 5 μm particle size) with 1 ml/min flow rate at 276 nm using UV detector.

Calibration curves for CEF and LIN

Tablets contain CEF and LIN in a ratio of 1:3. Appropriate aliquots of CEF and LIN stock solutions were taken in different 10 ml volumetric flasks and diluted up to the mark with mobile phase to obtain final concentrations of 2‑12 μg/ml and 6‑36 μg/ml of CEF and LIN, respectively. The solutions were injected using a 20 μl fixed loop system and chromatograms were recorded. Calibration curves were constructed by plotting average peak areas versus concentrations and regression equations were computed for both the drugs (Table 1).

Twenty tablets were weighed, powdered, a quantity of powder equivalent to 200 mg of CEF was transferred to 100 ml volumetric flask and dissolved using mobile phase up. The solution was filtered through 0.2 μm Nylon membrane filter paper. Ten mililitres above solution was transferred to 100 ml volumetric flask and diluted up to mark with mobile phase (100 μg/ml). The sample solution was prepared to give final concentrations of 6 μg/ml and 18 μg/ml for CEF and LIN, respectively. Twenty microlitres of the above sample solution was injected into HPLC and peak areas were measured under optimized chromatographic conditions.

The method of analysis was validated as per the recommendations of ICH [28] for the parameters like accuracy, linearity, precision, detection limit, quantitation limit and robustness. The accuracy of the method was determined by calculating percentage recovery of CEF and LIN. For both the drugs, recovery studies were carried out by applying the method to drug sample to which known amount of CEF and LIN had been added (standard addition method). At each level of the amount six determinations were performed and the results obtained were compared.

Intraday and interday precision study of CEF and LIN was carried out by estimating the corresponding responses 3 times on the same day and on 3 different days for the concentration of 6 and 18 μg/ml of CEF and LIN, respectively.

Limit of detection and limit of quantitation

The limit of detection (LOD) and limit of quantitation (LOQ) were calculated using following formula: LOD=3.3(SD)/S and LOQ=10(SD)/S, where SD is standard deviation of response (peak area) and S is the average of the slope of the calibration curve.

System suitability tests are an integral part of chromatographic method, which are used to verify reproducibility of any chromatographic system. To ascertain its effectiveness, certain system suitability test parameters were checked by repetitively injecting the drug solution at the concentration level 6 and 18 μg/ml for CEF and LIN, respectively to check the reproducibility of the system and the results are shown in Table 2.

For robustness evaluation of HPLC method, a few parameters like flow rate and percentage of methanol in the mobile phase were deliberately changed. One factor was changed at one time to estimate the effect. Each factor selected was changed at three levels (‑1, 0, +1) with respect to optimized parameters. Robustness of the method was done at the concentration level 6 and 18 μg/ml for CEF and LIN, respectively.

Forced degradation studies of both the drugs were carried out under conditions of hydrolysis, dry heat, oxidation and sun light. Twenty tablets were weighed, powdered, a quantity of powder equivalent to 200 mg of CEF was transferred to 100 ml volumetric flask and dissolved with mobile phase up to mark. The solution was filtered through 0.2 μm Nylon membrane filter paper. Ten millilitres above solution was transferred to 100 ml volumetric flask and diluted up to mark with mobile phase (100 μg/ml). The sample solution was prepared to give final concentrations of 6 and 18 μg/ml for CEF and LIN, respectively. This sample stock solution (100 μg/ml) was used for forced degradation studies.

The mobile phase consisting of methanol:phosphate buffer pH 7 (40:60, v/v), at 1 ml/min flow rate was optimised which gave two sharp, well‑resolved peaks with minimum tailing factor for CEF and LIN (fig. 2). The retention times for CEF and LIN were 3.127 min and 11.986 min, respectively. UV overlain spectra of both CEF and LIN showed that both drugs absorbed appreciably at 276 nm, so this wavelength was selected as the detection wavelength. The calibration curve for CEF and LIN was found to be linear over the range of 2‑12 μg/ml and 6‑36 μg/ml, respectively. The data of regression analysis of the calibration curves is shown in Table 1. The proposed method was successfully applied to the determination of CEF and LIN in their combined tablet dosage form. The results for the combination were comparable with the corresponding labeled amounts (fig. 2). 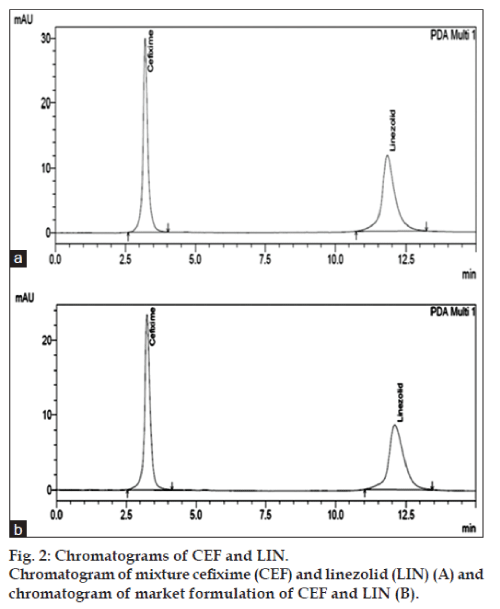 Fig. 2: Chromatograms of CEF and LIN.

The LOD for CEF and LIN were found to be 0.354 and 1.886 μg/ml, respectively, while LOQ were 1.074 and 5.717 μg/ml, respectively. The results for validation and system suitability test parameters are summarized in Table 2. Results for robustness evaluation for both the drugs are presented in Table 2. Insignificant differences in peak areas and less variability in retention times were observed. 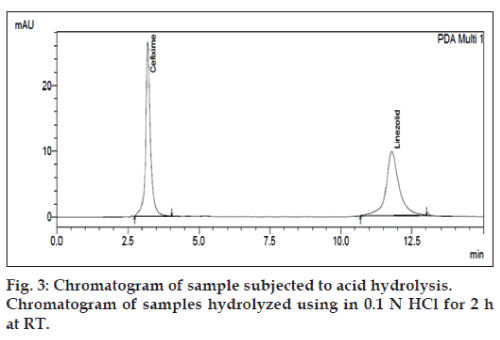 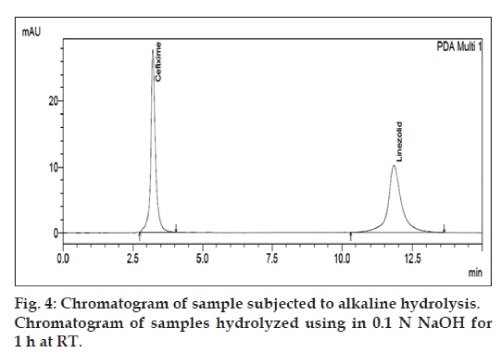 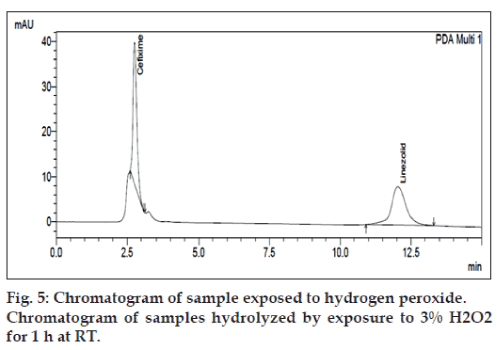 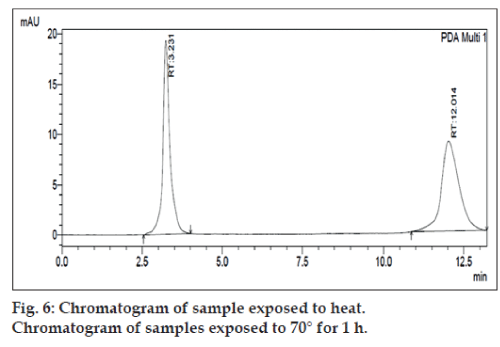 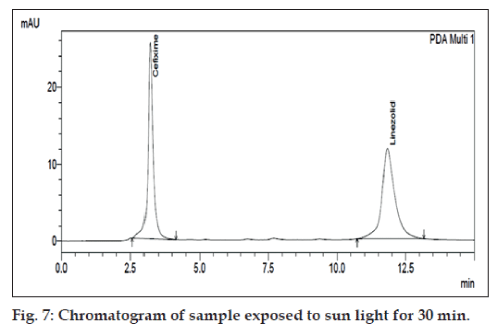 Fig. 7: Chromatogram of sample exposed to sun light for 30 min.

Table 3: Summary of degradation studies for cef and lin in their tablet dosage form

In the proposed study, a stability‑indicating HPLC method was developed for the simultaneous estimation of CEF and LIN and validated as per ICH guidelines. Statistical analysis proved that method was accurate, precise, and repeatable. The developed method was found to be simple, sensitive and selective for analysis of CEF and LIN in combination without any interference from the excipients. The method specifically estimates both the drugs in presence of all the degradants generated during forced degradation study. Assay results for combined dosage form using proposed method showed 99.19±0.454% of CEF and 98.93±0.757% of LIN. The results indicated the suitability of the method to study stability of CEF and LIN under various forced degradation conditions acid, base, dry heat, oxidation and photolytic degradation. It can be concluded that the method separates the drugs from their degradation products; it may be employed for analysis of stability for their tablet dosage form. However, characterization of degradation products was not carried out.