Epigallocatechin gallate is a potent phytomolecule with wide biological activity and is a class III drug. The therapeutic effect is limited, owing to poor stability and limited membrane permeability across the intestine. The aim of this study was to develop and evaluate colon-targeted microspheres of epigallocatechin gallate, using natural polymers. Water-in-oil emulsion crosslinking technique was used to prepare microspheres of epigallocatechin gallate using interpenetrating network of chitosan and gum acacia and glutaraldehyde was used as a crosslinking agent. Prepared microspheres were filled in capsules coated with Eudragit S100. The prepared microspheres were evaluated in vitro for preformulation studies, encapsulation efficiency, micromeritic properties, dissolution studies and stability studies. Fourier transform infrared spectroscopy and differential scanning calorimetry studies had proved that the drug and polymers are compatible. The good flow property of microspheres show that the microspheres are not aggregated. Scanning electron microscope micrographs of microspheres show a rough and folded surface morphology. The microspheres are spherical and uniform in shape. Formulations show good encapsulation efficiency. Formulation F1 to F6 show sustained release of drug for 10 h. The in vitro drug release of batch F1 to F6 were best explained by Higuchi models due to diffusion mechanism of drug release from polymeric matrix system. The selected formulation batch for a period of 3 mo at 40±2°/75±5 % RH show no significant changes. The current approach was helpful to develop polysaccharide based microspheres of epigallocatechin gallate to enhance colonic drug delivery.

Extensive research has expanded the role of green tea as bioactive molecules from a traditional beverage for healing many health ailments. Camellia sinensis is ample with catechins consisting of around 8 polyphenolic compounds. Different sources suggests, the most plentiful catechins present in tea are (-)-epigallocatechin gallate (EGCG) and (-)-epigallocatechin (EGC)[1,2]. EGCG shows beneficial health effects including anti- oxidation[3], anti-diabetes[4], anti-inflammation[5,6] and anti-tumorigenesis activity[7].

However, the oral administration of green tea catechins shows sub-or low-micromolar range peak plasma levels in human subjects or animals[13,14], which was lesser compared to the effective concentration of in vitro tests. Therefore, the practical utility of this therapeutically potential molecule is restricted, owing to poor stability in the colon and limited membrane permeability across the intestine[15-17]. Catechins are unstable under physiologic conditions and they could be rapidly degraded or metabolized through interactions with the hydroxyl groups on the phenol rings[18].

Accompanying antioxidant agents is vital for the stability of EGCG in gastrointestinal solutions[19,20]. Antioxidants inhibit formation of EGCG dimers, so as to inhibit epimerization of EGCG to GCG, which offers protection to EGCG.

Gum Arabic (GA) is an edible, dried gummy exudate from the trees of Acacia senegal and Acacia seyal. GA has been supposed to act as an antioxidant, which may prevent the degradation of EGCG and cytoprotective agent. A number of studies have reported cross-linking of GA with other biopolymers such as gelatin, chitosan and pectin. Cross-linking of polymers results in a new polymeric material with improved properties and functionality[21,22] . Chitosan is the most widely used material as an EGCG carrier, as the stability of EGCG in the intestinal fluid and plasma concentration are enhanced by chitosan as per reported literature[23,24]. The properties of chitosan can be improved by modifications in presence of other hydrocolloids[25], which has inspired the researcher in formulating advanced formulations by complexing chitosan with additional natural polymers.

In the present study, interpenetrating network (IPNs) have been prepared using blends of chitosan and GA in the form of microspheres of EGCG for colon targeted delivery. Microspheres were prepared by water-in-oil (w/o) emulsion crosslinking method and glutaraldehyde was used as a crosslinking agent. Prepared microspheres were evaluated for drug polymer study, particle size, percentage drug entrapment, surface morphology, percentage yield, in vitro drug release and stability studies.

Drug characterization, identification and drug polymer compatibility study: Drug sample was authenticated by ultraviolet (UV) absorbance, melting point measurement, Fourier transform infrared spectroscopy (FTIR) and ultra-performance liquid chromatography (UPLC). Chromatographic separation was attained on Thermo scientific Dionex Ultimate 3000 having ODS C18 Perkin Elmer column. The mobile phase consisting of acetic acid (1 %, v/v): acetonitrile (87:13, v/v) isocratically pumped at a flow rate of 0.25 ml/min and detection was monitored at 280 nm. The pH of mobile phase was default. 10 μl of sample solution was injected in each run. The column and auto-sampler were maintained at 30° and 35°, respectively. The melting point of the drug was determined by Differential scanning calorimetry (DSC) technique. The sample powder of the formulation was dispersed in potassium bromide (KBr) powder and compressing into disc by applying pressure of 5 tonnes for 5 min in hydraulic press. Spectra were recorded from 4500 to 400 cm-1 scanning range and the observed spectra were compared with reference FTIR spectra. FTIR of EGCG, polymers and microspheres were determined by Shimadzu FT-IR 8300 Spectrophotometer (Shimadzu, Tokyo, Japan). The UV Spectrum of EGCG in methanol was recorded using Shimadzu UV–1700 and compared with reported literature.

Preparation of microspheres: Briefly, required amounts of chitosan was dissolved in 2 % acetic acid solution and EGCG and GA were dissolved in deionized water using magnetic stirrer (remi)/ sonicator (Toshniwal process ultrasonicator bath) for 60 min. Afterwards, both the solutions were mixed for each formulation maintaining polymer to drug ratio and mixed thoroughly using a magnetic stirrer. This solution was incorporated drop by drop into 80 ml of liquid paraffin containing tween 80 (2 % v/v) followed by required stirring speed for 45 min with the help of a mechanical stirrer (Remi electro-technik Ltd., Vasai, India). After 45 min, 1 ml of 0.1 M HCl and required amount of glutaraldehyde (25 %) was added to the resultant emulsion and was stirred for 2 h. Finally, microspheres were obtained by vacuum filtration and washed with n-hexane and dried in hot air oven at 40°. All the studies were carried out in amber colored glass containers under dark conditions. Composition of different batches was tabulated in Table 1.

Optimization of microspheres by preliminary batches: Several ratios for drug:polymer was tried like 1:1, 1:2, 1:3, but 1:2 yield spherical microspheres. Amount of drug:polymer ratio was optimized at 1:2. Amount of external phase for the preparation of emulsion had a significant effect on formation of stable emulsion. Less volume of external liquid (60 ml) A1 leads to aggregation of microsphere and more volume of external phase (80 ml) A2 leads to formation of spherical to coarse particles. Therefore, 80 ml of external phase was optimized. Slower stirring speed produces lump and patch like formation inside beaker. As the rotation speed of the propeller increased from 1100-1700 rpm, the average particle size decreased. Stirring speed of 1500 and 1700 rpm (A5 and A6) was selected for further studies. Room temperature (A7) did not produced microspheres and 80° (A9) produces aggregated lumps, whereas 60° produces spherical microspheres, so 60° (A8) was selected for further studies.

Morphology and size of microspheres: Laser diffraction analyzer (Symantec Helos BF) was used to measure the particle size of prepared formulation batches. The average size range values were expressed for all formulations. Shape and surface morphology of the prepared microspheres were characterized by scanning electron microscope (SEM) (Nova nano scanning electron microscope 450 FEI Ltd.). Intensity of 10 kV was used for taking the photographs of microspheres at different selected magnifications.

Determination of percentage yield, drug loading and entrapment efficiency: 100 mg of prepared microspheres were first crushed with the help of glass mortar pestle followed by dispersion in 100 ml of methanol and kept for overnight for the extraction of drug. The supernatant was diluted with methanol after centrifugation at 2500 rpm for 10 min and using UV spectrophotometer (Shimadzu UV-1700) absorbance was measured at 273.5 nm. After that the mass of EGCG in microspheres was calculated by calibration curve. The percentage entrapment efficiency (EE) was calculated for each batch six times.

In vitro release study: USP type-I dissolution apparatus (paddle apparatus), (Electrolab, EDT–08 LX, Mumbai, India) was employed for in vitro release study. The dissolution medium selected was pH 1.2 for 2 h, pH 6.8 for next 2 h and then pH 7.4 up to 10 h. 5 ml of samples were taken at regular interval of time and sink conditions were maintained and the absorbance were taken at 273.5 nm.

Kinetics of release study: To study the mechanism of EGCG release from the microspheres, the release data is fitted to the zero order, first order, Higuchi equation and Korsmeyer peppas equation models.

Preparation and evaluation of Eudragit S100 coated capsules filled with EGCG microspheres: The coating solution consisted of a mixture of eudragit S100 (polymer), polyethylene glycol 400 (plasticizer) and talc. A mixture of isopropanol (IPA) and acetone (1:1) served as the solvent. Briefly, polyethylene glycol-400 (PEG-400) at 20 % w/w of polymer was dissolved in IPA-acetone mixture to obtain a clear solution. Next, eudragit S100 was added in small amounts so as to dissolve the polymer. Finally, talc was added to reduce tackiness and stickiness of eudragit films. The final coating solution was stirred for 10 min. The coating solution was applied to capsules (No. 4) containing 100 mg microspheres of batch F1 and F4 by dip coating technique and compared with uncoated batch for in vitro release. The new coated batches are named as F7 and F8.

Stability studies of the selected formulation [F8 (F4 coated batch)] was carried out as per The International Council for Harmonization (ICH) guidelines for a period of 3 mo at 40±2°/75±5 % RH[26]. The batch was then evaluated for percentage drug entrapment and percentage drug release. Similarity factor (f2) was calculated using following equation. 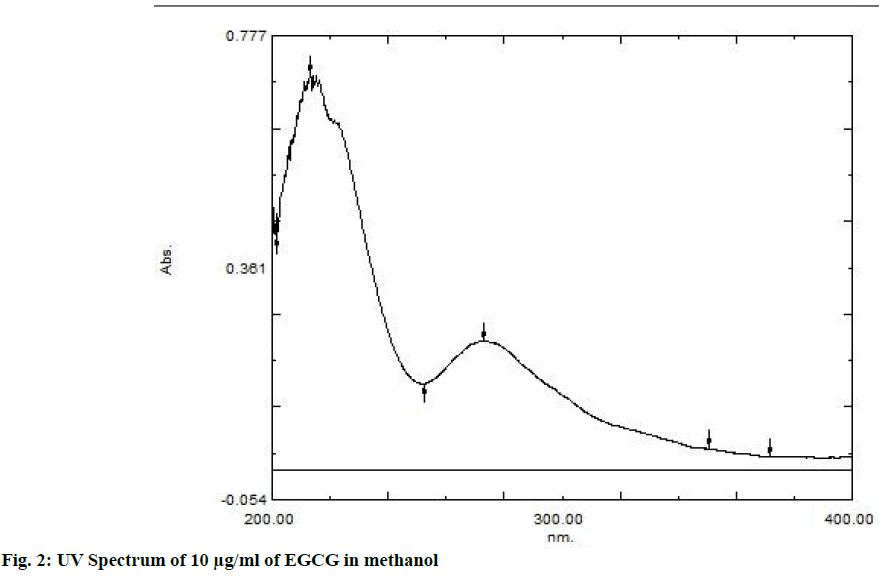 Figure 2: UV Spectrum of 10 μg/ml of EGCG in methanol 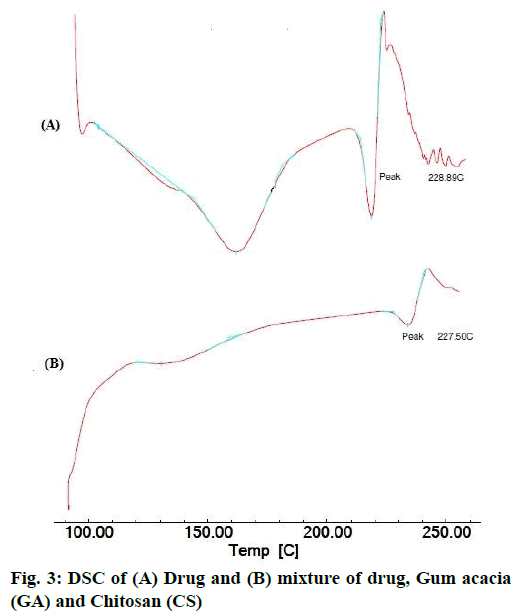 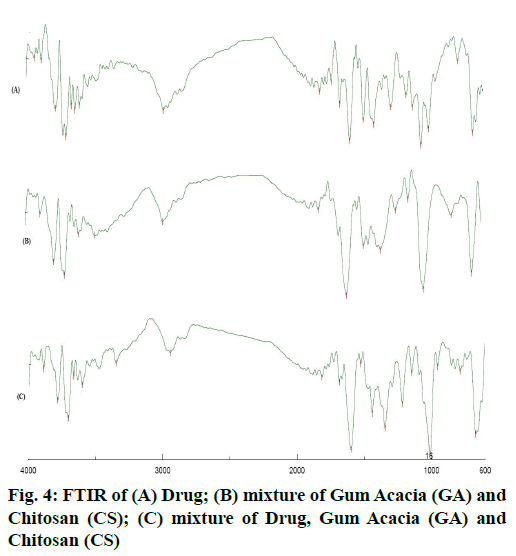 The microspheres were nearly spherical and uniform in shape. The SEM images and microscopic images of microspheres at 100x (F4) of microspheres show a rough surface morphology (fig. 5 and fig. 6). Particle sizes of the formulated batches were found between 31.82±0.17 to 87.43±0.67 μm. The values are shown in Table 4. Particle size distribution of formulation batch (F4) was represented in fig. 7. The microspheres coated with eudragit S100 show better release compared to uncoated microspheres. There was minor drug release during first 4 h and high release was seen in next 6 h. The comparative release profile of formulation batch F1 and F4 was represented in fig. 9. From the results of stability studies (Table 6), similarity factor was calculated. The similarity factor was found to be 85.80. It suggests the similarity as the f2 value exceeds 50. Similarity factor is used when dissolution profile has more than four time periods. The chitosan loaded EGCG microsphere could be prepared by o/w emulsion cross linking method. The prepared microsphere exhibit good release profile owing to the small particle size, which might help better absorption. The EGCG release from microspheres was extended up to 10 h. The drug release depends upon the concentration of polymer. GA plays the role of antioxidant and stabilizer in polyelectrolyte complexes due to its unique surface property and ability to attain lower viscosity at a higher concentration in solution compared to other polysaccharides. Glutaraldehyde has been supposed to act as an antioxidant and cytoprotective agent. The microspheres were filled in to the capsule (No. 4) to make them a single unit dosage form.

The authors also thankAPMC College of Pharmaceutical Education and Research, managed by Himatnagar Kelavani Mandal (Himatnagar, India) for rendering the facilities for the experimental work.