Mouth dissolving tablets constitute an innovative dosage form that overcomes the problems of swallowing and provides a quick onset of action. In view of enhancing bioavailability an attempt has been made to study two different methods direct compression and sublimation in formulation of mouth dissolving tablets of clozapine. Total four formulations using various superdisintegrants and subliming agents were prepared. All prepared formulations were evaluated for physico-chemical parameters. The formulations exhibited good disintegration properties with total disintegration time in the range of 25 to 35 s. Comparative evaluation of two methods showed direct compression method is a better alternative to sublimation method as its formulations rapidly disintegrate in oral cavity. In vitro cumulative percentage drug release for formulations prepared by direct compression with explotab superdisintegrants shows 99.79 while sublimation method using camphor 93.58 release in 12 min. Kinetic studies indicated that all the formulations followed first order release with diffusion mechanism.

The oral route of administration is considered as the most widely accepted route. But the most evident drawback of the commonly used oral dosage forms like tablets and capsules is difficulty in swallowing, leading to patients incompliance particularly in case of pediatric and geriatric patients [1]. Thus, a new delivery system known as oral fast dissolving/disintegrating (FDDS)/melt-in-mouth tablets gaining importance. These oral dosage forms dissolve rapidly in saliva and can be swallowed without the need of drinking water [2]. Elimination of bitterness is an important criterion in product formulation of mouth dissolving tablets [3].

Superdisintegrants added in the formulation increase the dissolution characteristics thus increasing the bioavailability of drug [4]. Mouth dissolving tablet disintegrate in mouth and are useful for potent drugs where fast absorption is required. Clozapine, an antipsychotic agent has been found to be an ideal candidate for mouth dissolving tablets [5]. Clozapine is used to suppress both positive and negative symptoms of schizophrenia and many neuroleptic responses.

In the present study, an attempt has been made to develop mouth-dissolving tablets of clozapine by direct compression and sublimation methods using suitable superdisintegrants and subliming agents.

Clozapine tablets each containing 50 mg drug was prepared as per the formulae given in Table 1. The formulations F1and F2 were prepared by the direct compression method [6] and the formulations F3 and F4 were prepared by sublimation method [7]. In direct compression method all the ingredients were passed through # 60 sieve. Clozapine, mannitol, microcrystalline cellulose and sodium saccharin were triturated in a glass mortar. Superdisintegrants were incorporated in the powder mixture and finally magnesium stearate and talc were added as lubricant. The powder mix was weighed individually and compressed with 10 mm flat face surface punches using hydraulic press. In sublimation method accurately weighed quantities of clozapine, volatile component, mannitol and sodium saccharine were mixed and passed through # 45 sieves. Finally magnesium stearate and talc were added and then subjected to compression. After compression tablets were heated in hot air oven at 60o until constant weight was obtained to ensure the complete removal of volatile component. The tablets were evaluated for various parameters such as physical appearance, weight variation, hardness, friability, drug content uniformity, disintegration time and in vitro dissolution test.

Tablet containing 50 mg of drug was dissolved in 100 ml of 0.1 N hydrochloric acid in volumetric flask. The drug is allowed to dissolve in the solvent. The solution was filtered, 1 ml of filtrate was taken in 50 ml of volumetric flask and diluted up to mark with 0.1N hydrochloric acid and analyzed spectrophotometrically at 209 nm. The concentration of clozapine in mg/ml was obtained by using standard calibration curve of the drug.

The method reported by Yunixia et al. was used to measure tablet wetting time. A piece of tissue paper folded twice was placed in a small petri dish (6.5 cm) containing 6 ml of simulated saliva pH, a tablet was placed on the paper and the time for complete wetting was measured. Three trials for each batch were performed and standard deviation determined. A tablet was placed in 10 ml of simulated saliva fluid. Time required for complete dispersion of tablet was measured in seconds.

In vitro release studies were carried out using USP XXIII tablet dissolution test apparatus paddle method at 37±10, taking 900 ml of saliva fluid as dissolution medium. Speed of rotation of the paddle was set at 50 rpm. Aliquots of 5 ml were withdrawn after 2, 4, 6, 8, 10 and 12 min and analyzed spectrophotometrically at 209 nm. 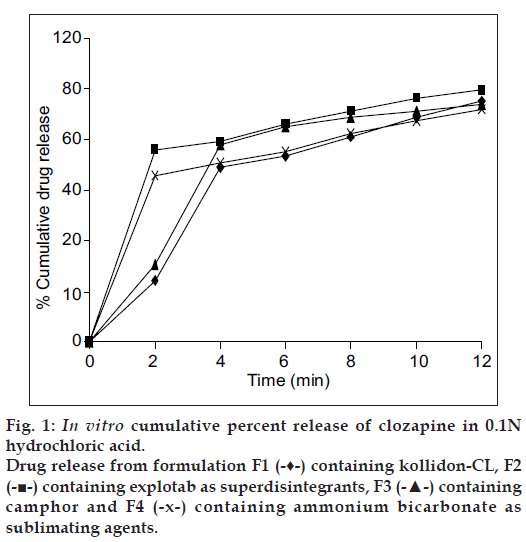 From the study, it can be concluded that direct compression method showed better disintegration and drug release as compared to sublimation method. The prepared tablets disintegrate within few seconds without need of water; thereby enhance the absorption leading to its increased bioavailability.

Authors are thankful to Sun Pharmaceuticals, Vadodara for the gift sample of clozapine and Principal, KLES’s College of Pharmacy, Belgaum for providing necessary facilities to conduct the work.