Oral route is generally viewed as the most comfortable and convenient route for medication. Absorption of oral dosage in the aqueous gastrointestinal fluid varies depending on their requisite solubility. It has been reported that approximately 40 % of existing and newly manufactured drug molecule undergo low solubility and dissolution characteristics. Due to their slow and constrained release into gastrointestinal fluid causing low oral bioavailability; poor water solubility of drugs has become one of the biggest concerns in pharmaceutical formulations [1,2]. Numerous approaches such as nano-suspensions [3], nano-structured lipid carriers [4] and solid dispersion [5] have been utilized for improving dissolution of Fluvastatin Sodium (FLS).

However, no attempt has been made for developing FLS microspheres; however microspheres have tremendous potential to augment the dissolution of class II drugs [6,7].

Since, FLS is Biopharmaceutical Classification System (BCS) class II drug having poor aqueous solubility and therefore reduced drug dissolution and low (24 %) oral bioavailability. Therefore, there is requisite of improving dissolution of FLS. Therefore, in present investigation, solvent-evaporation technique followed by freeze-drying has been utilized for production of Fluvastatin Sodium Microspheres (FLS-MS). It is an advanced solvent removal technology with tremendous prospective in the pharmaceutics for conversion of active pharmaceutical ingredient from the crystalline to amorphous form, production of microspheres with prompt hydration potential. In this process, moisture is removed from the product via sublimation as well as desorption phase [8]. The hydrophilic excipients i.e. Polyvinyl Pyrollidone K-30 (PVP K-30) and Poloxamer 407 has been used in microsphere production which plays an imperative function in enhancing drug’s wettability, dispersibility and dissolution [7]. PVP K-30 is a biocompatible hydrophilic amorphous polymer having low toxicity, high aqueous solubility, economic cost and physiological tolerance which has been recognized as safe by the Food and Drug Administration [9-11]. Poloxamer 407 is polyoxyethylene-polypropylene block copolymer nonionic surfactant that has good solubilizing capacity, low toxicity, good drug-release characteristics and can achieve the highest degree of dissolution enhancement [12]. Central Composite Design (CCD) was explored to execute the experimentation for microsphere production and for selection of an optimal composition of optimized FLS-MS for achieving the maximum percentage drug dissolution along with the least number of experiments [13].

The aim of the present study was to explore novel combinations of freeze dried microspheres and their Eudragit polymers-based matrix tablet techniques in an attempt to improve drug dissolution and develop oncedaily sustained-release matrix tablet of optimized FLSMS, respectively.

The 13 batches of FLS-MS were manufactured according to CCD layout given by Stat-Ease Inc Design Expert® Software (Version 11.0.4.0) for assessing the influence of two important factors-drug:polymer (X1) and surfactant (X2) on the t50 % (min) (Y1), Q90 (percent) (Y2) and drug content (percent) (Y3) along with determination of an optimized composition for production of an optimal FLS-MS (Table 1).

Using Design expert software, fit summary statistics was applied in order to select the appropriate model out of linear, 2-Factor Interaction (2FI), quadratic and cubic models. The model which has highest R2 value was applied for further analysis. Analysis of Variance (ANOVA) was performed to determine F-value and p-value for selected model, X1, X2, X1X2, X12, X22 to find out significant independent parameters which affect response variables (p<0.05). The quadratic equations for Y1, Y2 and Y3 were developed to estimate main, interaction as well as quadratic influences of factors on responses. Diagnostic plots were developed by Design- Expert software to investigate the goodness of fit of proposed model. Three-dimensional response surface graphs as well as corresponding two-dimensional contour graphs were developed using the Design-Expert software model graph tool to bestow graphical display of influence of independent variables on dependent parameters [23-25].

An overlay plot was developed using graphical optimization tool in Design-Expert software to acquire graphical view displaying optimum values of independent factors (coded values of X1 and X2) and predicted response variable (Y1, Y2 and Y3). To validate the graphical optimization, an additional experimental batch of FLS-MS was manufactuted using optimal variables values and in vitro dissolution was performed for estimating t50 % (Y1) and Q90 (Y2) and percentage drug content (Y3). For fullfilling the validation strategy, the experimental values of response variables should be in close agreement with software predicted values [13].

Dynamic light scattering: Mean diameter and Polydispersity Index (PDI) for particle size distributions of optimized FLS-MS were estimated by dynamic light scattering technique using Beckman Coulter, Version 3.73/2.30 (USA). In brief, 20 mg of FLS-MS was dispersed in 2 ml of distilled water in quartz cuvette and measurements were carried out at 25o.

All the experiments were performed in triplicate and results were expressed as mean±SEM (n=3). The experimental design analysis was implemented by Design-Expert software. All other data were statistically analyzed using GraphPad Prism version 6.01 (SanDiego, CA). Data were analyzed by analysis of variance Bonferroni post hoc test. The p<0.05 was considered statistically significant.

A total 13 formulations of FLS-MS were synthesized in accordance with CCD in order to optimize X1 (drug:polymer) and X2 (surfactant). The t50 % (min) (Y1), Q90 (percent) (Y2) and drug content (percent) (Y3). The findings from this research design indicate that drug:polymer (X1) and surfactant (X2) greatly affected FLS-MS. For the quadratic models, the superlative fit for t50 % (Y1), Q90 (Y2) and percentage drug content (Y3) was observed owing to its highest r2 in contrast to linear, Two Factor Interaction (2- FI) and cubic models [25,30] (Table 2). Hence, the quadratic approach was developed to identify the effects of variables on response parameters as shown:Yi=b0+b1X1+b2X2+b12X1X2+b12X12+b22X22

Fig. 1A, fig. 2A and fig. 3A displayed externally studentized residuals against the predicted values of response variables which showed that the points referring to response variables i.e. Y1, Y2 and Y3 were adjacent to the zero-axis suggesting no consistent bias. Predicted versus actual data graph depicted in fig. 1B, fig. 2B and fig. 3B showed a significant linear curve running through the origin, which confirmed that response parameters were conjunctiva with predicted value [23,24].

The two dimensional (contour) and three dimensional (response surface) plots for Y1-Y3 are presented in fig. 1-fig.3 to illustrate the influence of independent variables on Y1 (t50 %), Y2 (Q90) and Y3 (percentage drug content). The findings obtained in this study suggested that independent factors influencing t50 % were drug:polymer (X1), surfactant (X2), X12 and X22 (p<0.05) (Table 3). The quantitative assessment of the important models showed that drug: polymer (X1) and surfactant (X2) had the foremost antagonistic effect on t50 % of FLS-MS, implying that accelerating X1 and X2 values in composition reduces the t50 %. This signified that addition of higher amounts of PVP K-30 and Poloxamer 407 to FLS-MS significantly enhances the drug dissolution profile as indicated by decreased t50 % value. The following regression equation represented a fitted model for t50 %. The perfect fit design for t50% was quadratic (r2=0.9792) (Table 2). As anticipated, fig. 1C and fig. 1D showed that t50 % of FLS-MS was antagonized by significantly increasing the two factors. The F-values and related p-values for response parameters are summarized in Table 3. A model was considered significant if p<0.05. A negative value in quadratic equation indicates an inverse relationship or antagonistic effect between the factor and the response while a positive value in the regression equation exhibits an effect that favors the optimization due to synergistic effect. A negative sign in quadratic formula implies a negative correlation or antagonistic action whilst the positive value in regression model demonstrates synergistic effect of factors on response variables [31,32]. This might be linked to the fact that PVP K-30 and Poloxamer 407 have solubilizing effect on hydrophobic drug particles due to their characteristics of decreasing surface tension and increasing wettability and dispersibility. Therefore, PVP K-30 and Poloxamer 407 helps to improve the dissolution profile of FLS which decreases the t50 % value [12,29].

Following equation can explain the effect of factors levels on Q90:

Good correlation among adjusted and predicted value had been shown by r2 of 0.9692 (Table 2). Q90 (Y2) was dramatically influenced with X1, X2, X12 and X22 (p<0.05). The positive regression coefficient showed that rise in the drug:polymer (X1) could result in a substantial boost in the percentage of drug release which could be correlated to the PVP K-30 and Poloxamer 407 solubilizing action [12,29]. The Q90 pattern is progressively rising to its highest point (region of plot pointing upwards) (fig. 2C and fig. 2D).

With an increase in drug:polymer (X1), there was an increasing trend in the values of percentage drug content that might be due to higher quantity of polymer accessible to hold enormous quantity of drugs [33] (fig. 3C and fig. 3D). Drug:polymer showed significant positive effect on X3 as indicated by the large F-value (130.21) (Table 3) and positive coefficient value (b1=9.27). 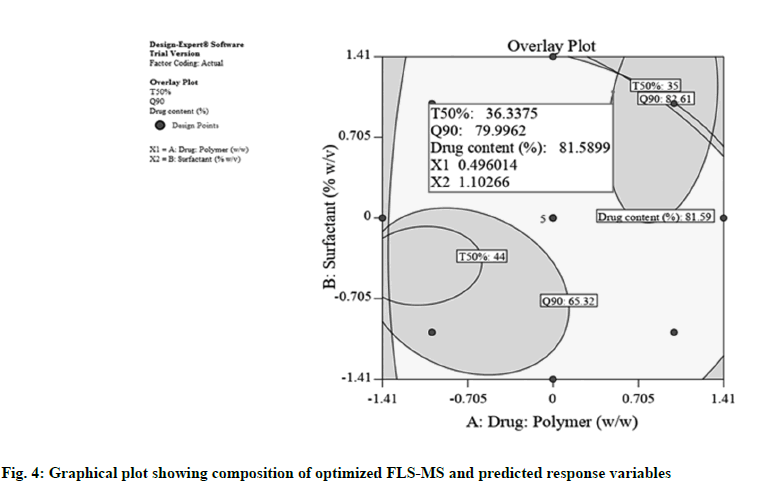 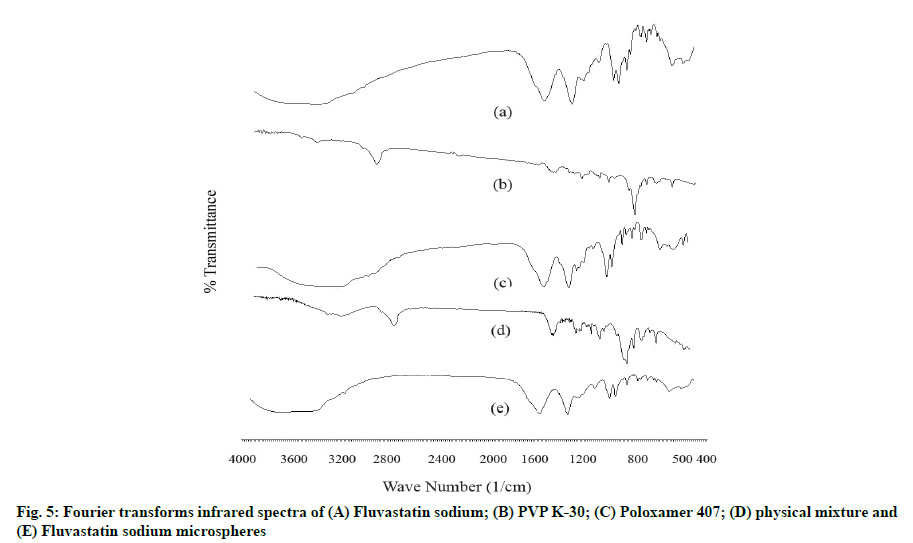 The mean diameter and PDI of FLS-MS using dynamic light scattering was found 0.78 μm and 0.287, respectively which revealed that produced microspheres have smaller size in micrometric range and superior degree of homogeneity as indicated by small PDI value (fig. 7). The smaller diameter of FLS-MS could be attributable to Poloxamer 407 which lowers surface tension at the particles interfaces and thereby providing a shielding barrier which obstructs microspheres aggregation to synthesize smaller size microspheres having uniform particle size distribution [34]. 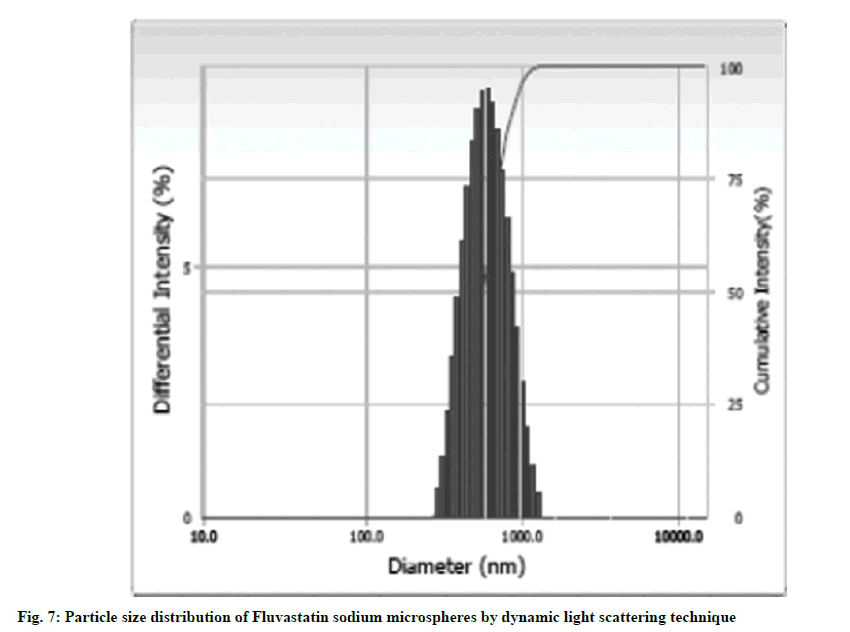 SEM observed the morphological features of FLSMS and illustrated spherical shape as well as porous rough exterior morphology of microspheres (fig. 8). The surface of FLS-MS was coarse with homogeneous micropores which could be attributed to hydrophilic nature of PVP K-30 and Poloxamer 407 which leached out during lyophilization process and consequently producing pores over the surface of microspheres. Furthermore, particles do not get agglomerates and appears discretely from one another which could be due to high zeta potential and potent surface charge over particles [35]. FLS-MS rendered a rapid release of 91.2 % and 94.21 % of drug within 2 and 6 h, whereas FLS-MS-SRT revealed 93.1 % drug release through diffusion over 24 h (fig. 11). The slow drug release from matrix tablet could attributable to swelling tendency of eudragit polymeric matrix. According to the Korsmeyer-Peppas equation, the ‘n’ value of 0.5318 indicated ananomalous (diffusion/erosion controlled) drug release mechanism from FLS-MS-SRT [14-17,37] (fig. 12) In this study, we utilized a combination of freeze dried microspheres and their Eudragit polymers-based matrix tablet techniques in order to acquire improved dissolution profile and sustained release of Fluvastatin sodium to reduce dosage frequency. Solvent evaporated freeze dried microspheres manufactured using PVP K-30 and Poloxamer 407 exhibited 3.58-fold improvement in dissolution of Fluvastatin sodium in 2 h. Furthermore, sustained release of Fluvastatin sodium over 24 h was achieved through Eudragit RL 100 and Eudragit RS 100 based sustained release matrix tablet. The drug release mechanism from FLS-MS-SRT was found anomalous (n=0.5318) which suggested diffusion- along with erosion-controlled release mechanism. Conclusively, it has been shown that the innovative integration of freeze dried microspheres and their Eudragit polymerbased matrix tablet strategies could gain significant potential to boost drug dissolution and sustained release of water-insoluble drugs together with reduced dosage frequency.

The authors wish to thanks Chitkara College of Pharmacy, Chitkara University, Punjab, India for providing infrastructure facilities for carrying out this work. The authors express their gratitude to Evonik Industries AG (Mumbai, India) for supplying Eudragit RL 100 & RS 100. The researchers do acknowledge Stat-Ease, Inc for trial version 11.1.2.0 of Design- Expert software.

The authors declare that they have no competing interest.