Effect of ?-cyclodextrin on rheological properties of some viscosity modifiers

Cyclodextrins are a group of novel excipients, extensively used in the present pharmaceutical industry. Sometimes they show significant interactions with other conventional additives used in the formulation of dosage forms. The effect of β-cyclodextrin on the rheological properties of aqueous solutions of some selected viscosity modifiers was studied in the present work. β-cyclodextrin showed two different types of effects on the rheology of the selected polymers. In case of natural polymers like xanthan gum and guar gum, enhanced apparent viscosity was found and in case of semi-synthetic polymers like sodium carboxymethyl cellulose and methyl cellulose, reduction in apparent viscosity was found. β-cyclodextrin was included at 0.5, 1 and 2% w/v concentrations into the polymeric solutions. These findings are useful in the adjustment of concentrations of viscosity modifiers during the formulation of physically stable disperse systems.

Cyclodextrins (CD) have gained utmost importance in recent times due to their numerous practical applications [1,2] in many areas and particularly in the formulation of pharmaceutical dosage forms. Formulation of an effective and pharmaceutically elegant suspension is usually much harder to achieve than that of a tablet or capsule of the same drug because of their inherent physical instability problems [3]. CD complexes have immense application in improving the physical stability of suspensions [4]. In the suspension of metronidazole benzoate, the phase transition of the anhydrous form to the monohydrate, along with the crystal growth during the transition, was suppressed by β-CD complexation [5]. Celecoxib suspensions formulated employing its β-CD complexes exhibited improved physical stability and dissolution rate than those formulated with celecoxib alone [6]. CDs were found to interact and inactivate the preservatives in liquid formulations. Antimicrobial substance for the preservation of CD solutions should be selected appropriately according to the results of one reported [7] study. CDs might also interact with other conventional additives like viscosity modifiers/ suspending agents employed in the formulation of suspensions. Within this frame work, the present work was aimed at studying the effect of β-CD on the rheological properties of selected viscosity modifiers.

Methyl cellulose (2%), sodium CMC (0.5%), xanthan gum (0.1%) and guar gum (0.5%) solutions were prepared by dissolving the individual polymers in distilled water. The concentrations were selected based on their relative viscosities, which differ significantly among the four polymers. Xanthan gum exhibits high relative viscosity at low concentration, whereas the other polymers exhibit low to high values [8]. Above these concentrations they form gels. The present work was focussed on the interaction between β-CD and the above selected polymers in liquid state only. The polymers were weighed using Shimadzu, AY220 digital balance and added gradually to about three fourth of the warm water, which was under stirring using a Remi mechanical stirrer. Stirring was continued for about 2 h and then the rest of the water was added and the solutions were allowed to stand for overnight at room temperature to hydrate thoroughly to exhibit maximum viscosity. Similarly another set of the same polymeric solutions incorporating β-CD at 0.5, 1 and 2% w/v concentrations were also prepared.

The apparent viscosity was measured using a Brookfield, DV-E viscometer with spindle number 2 at 25º. Viscosity was measured at various speeds of the spindle ranging from 0.25 to 100 revolutions per minute (rpm). One hundred millilitres of the prepared, completely hydrated polymeric solution was taken in 100 ml beaker and the viscosity was measured without the guardleg. Sufficient time was allowed for the indicated reading to stabilize. Before starting the measurements the viscometer level was adjusted using the two leveling screws on the base.

The rheological behavior of the neat polymers and the effect of CD on the rheological behavior of the polymers were studied based on the plotted rheograms for the data generated. Viscosity is a function of shear rate. The speed of the spindle was used instead of the actual shear rate to plot the graphs. Plots of rpm versus apparent viscosity were drawn and analyzed in the present work.

Polymers are used as viscosity imparting agents in the preparation of disperse systems. Four commonly used polymers namely guar gum, xanthan gum, methyl cellulose and sodium CMC were selected for the present work. The concentrations were decided considering their optimum values of viscosity in aqueous solutions and also from preliminary trials conducted in the laboratory. Guar gum and xanthan gum are naturally occurring poly saccharides where as methyl cellulose and sodium CMC are semisynthetic cellulose derivatives. All the four polymers were not utilized in the same concentration because of the huge variation in their viscosities. All the polymers produced clear solutions after complete hydration in water alone and with β-CD. As indicated by the viscosity data in fig. 1, pseudoplastic rheological behavior was observed with the four polymers when studied alone. Methyl cellulose showed highest viscosities at all speeds of the spindle. However its concentration was also high (2%) compared to the other polymers. Even at a very low concentration of 0.1%, xanthan gum showed good viscosity profile. The highly curved nature of its rheogram indicates that the natural material, xanthan gum exhibits pronounced pseudoplastic rheology compared to rest of the polymers. 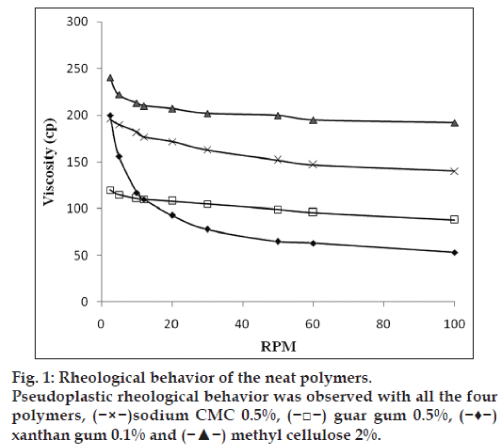 The effect of β-cyclodextrin on the rheological behavior of the individual polymers was shown in figs. 2-5. Increase in viscosities was observed after addition of β-CD in case of xanthan gum (fig. 2) and guar gum (fig. 3). As the proportion of cyclodextrin was increased, the viscosities were also enhanced. Previous investigations also revealed that the viscosity of xanthan gum solutions was considerably increased in the presence of guar gum and magnesium aluminum silicate [9]. This positive interaction may be desirable in some instances and can be exploited to reduce the amount of xanthan or guar gum in the presence of β-CD in some formulations. Decrease in viscosities was found after addition of β-CD to sodium CMC (fig. 4) and methyl cellulose (fig. 5). As the proportion of β-CD was increased the viscosities were also decreased. The novel excipient, β-CD produced different types of effects on the rheology of different polymers. In case of natural polymers (xanthan gum and guar gum), positive effect was found and in case of semisynthetic polymers (sodium CMC and methyl cellulose), negative effect was found. Fig. 2: Effect of β-CD on the rheological behavior of xanthan gum. 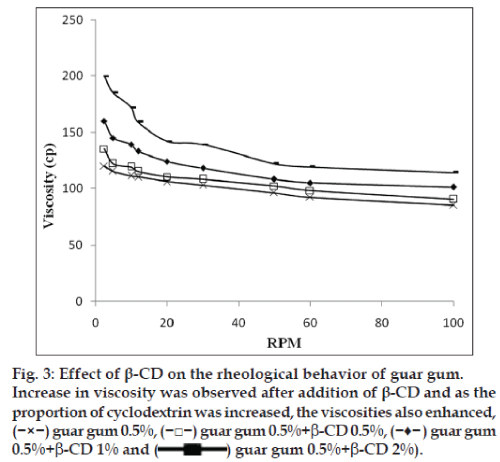 Fig. 3: Effect of β-CD on the rheological behavior of guar gum. Fig. 4: Effect of β-CD on the rheological behavior of sodium CMC. 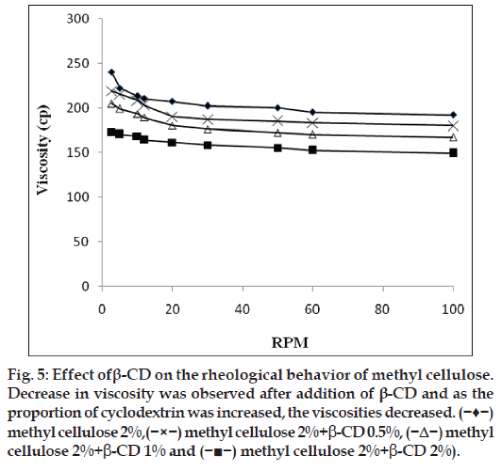 Fig. 5: Effect of β-CD on the rheological behavior of methyl cellulose.

Addition of β-CD into the polymeric solutions exhibited significant effect on the flow of the respective solutions. In the group of natural polymers (xanthan gum and guar gum), enhancement in apparent viscosity and in case of semisynthetic polymers (sodium CMC and methyl cellulose), reduction in apparent viscosity was found. The viscosity enhancement might be due to the formation of bridges between adjacent polymer chains resulting in strong association network. The decrease of the viscosity was attributed to deactivation of the hydrophobic associations [10]. These findings should be considered in the adjustment of concentration of viscosity modifiers in the formulation of physically stable disperse systems. The studies pertaining to the interaction between CDs and hydrophilic polymers in terms of rheology have considerable application in the development of liquid products in pharma and food industry.

The authors wish to thank honorable Chairman and Principal of Yalamarty Pharmacy College for providing necessary facilities to carry out the research work.