5-Aminolevulinic acid-based photodynamic therapy (ALA-PDT) is one of the most effective treatments of skin diseases such as cutaneous carcinoma and intractable acne [1-4]. In ALA-PDT, ALA is administered topically, and an endogenous photosensitizer, protoporphyrin IX (PpIX), is accumulated in skin diseases. When PpIX is photoexcited by light with a specific wavelength ranged from 600 to 700 nm, it transfers the energy to molecular oxygen and forms cytotoxic singlet oxygen, leading to photochemical and photobiological processes that cause irreversible photodamage to the skin disease [5-7].

Skin has an outermost thin layer, stratum corneum and underlying viable epidermis and dermis. Since the stratum corneum is highly hydrophobic, dry, and a percutaneous barrier, hydrophilic compounds are inferior to hydrophobic compounds in permeating through the stratum corneum [8]. When ALA is topically applied to skin diseases in ALA-PDT, it is hard for ALA to permeate into the stratum corneum because of its hydrophilicity. In fact, in the clinical treatment of solar keratosis lesion and Bowen’s disease by ALAPDT, ALA is passively administered by percutaneous absorption for 4-6 h before light irradiation [9]. The long-time administration makes it difficult to establish ALA-PDT as a standard treatment modality and to apply to outpatients. Therefore, skin permeation of ALA needs to be improved.

Recently, other techniques such as ultrasound, electroporation, and chemical enhancers have been combined with iontophoresis [22]. The combination system seems to be more effective for transdermal delivery compared with the iontophoresis system alone. Moreover, ethanol is well known as a topical penetration enhancer and is often used in transdermal delivery systems [23]. Ethanol extracts lipids and proteins exerting a percutaneous barrier function on stratum corneum; thereby accelerating skin permeation of drugs.

In the present investigation, in order to enhance percutaneous ALA absorption within a shorter time, we determined in vitro iontophoretic transdermal delivery of ALA through Yucatan micropig (YMP) fullthickness skin with and without ethanol, evaluating the effect of the combination of iontophoresis and ethanol on ALA skin permeation.

YMP full-thickness skin employed for in vitro iontophoretic permeation experiments was purchased from Charles River Laboratories Japan, Inc. ALA (98 %) was obtained as ALA hydrochloride from Cosmo Bio Co., Ltd. Ethanol (99.5 %), acetylacetone (99.5 %), formaldehyde (36.0-38.0 %), sodium chloride (99.5 %), and agar (powder) were purchased from Kanto Chemical Co., Inc. A 4-(2-hydroxyethyl)- 1-piperazineethanesulfonic acid (HEPES) buffer solution was prepared with 4-(2-hydroxyethyl)-1- piperazineethanesulfonic acid and an aqueous sodium hydroxide solution (0.1 mol/l), which were purchased from Nacalai Tesque, Inc. All of the materials were used without further purification.

In vitro iontophoretic permeation experiment of ALA with and without ethanol through YMP full-thickness skin was carried out with the iontophoretic device described in Figure 1. YMP full-thickness skin was settled on the receiver compartment having an inner volume of 150 cm3. The anode cell (donor compartment) was filled with 0.6 mol/l (100 mg/l) ALA solution prepared using distilled water with and without ethanol. The cathode cell and the receiver compartment were filled with the HEPES buffer solution (pH=7.4) containing 133 mmol/l sodium chloride. The platinum electrodes fixed in the anode and cathode cells by using agar gel containing 0.9 % sodium chloride were connected to a constant current source (HA-3001A, Hokuto Denko Corporation), and a current density of 0.132 mA/cm2 was applied at 37° for 6 h. The effective diffusion area on the skin was 3.8 cm2. A 200 μl of HEPES buffer solution from the receiver compartment was collected at specified time intervals. The concentration of ALA permeated through the YMP skin was measured, and the cumulative amount of permeated ALA per unit skin area was calculated. 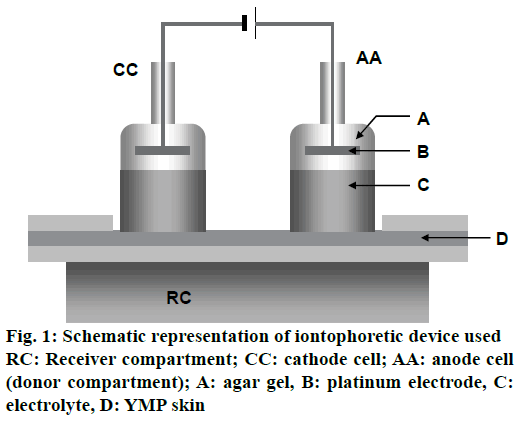 The concentration of ALA permeated through the YMP full-thickness skin into the buffered solution in the receiver compartment was measured by the fluorometric method described in the previous paper [24]. Fifty microliters of the buffered solution with ALA permeated was treated with a mixture of 3.5 ml of acetylacetone, ethanol, and water (15:10:75 in volume ratio) containing 4 g of sodium chloride per liter, followed by the addition of 450 μl of 85 ml/l aqueous formaldehyde solution. The treated solution was heated in boiling water for 30 min, cooled in cold water for 5 min. These reactions eventually gave us the fluorescent ALA derivative, 2-methyldeneamin-3,5-diacetyl-4,6-dimethylphenylpropionic acid. The fluorescence intensity of the ALA derivative was measured with a fluorescence spectrophotometer (FP-6500, Jasco Co.). The excitation and emission wavelengths were 363 and 473 nm, respectively. 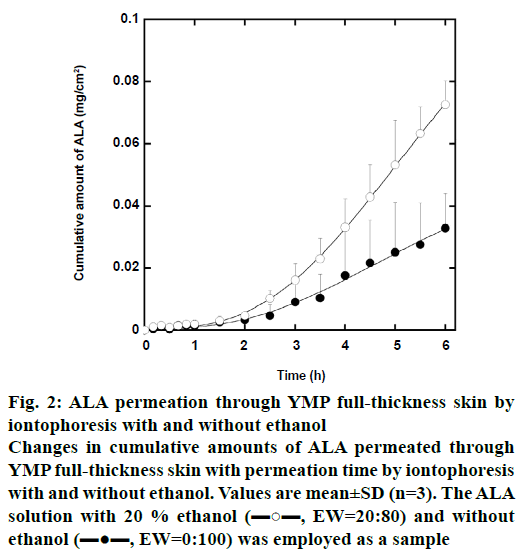 Compared to the Kp in the passively transdermal delivery with 40 % ethanol, 2.40×10-5 cm/h, which was estimated in previous reports [27], the Kp of ALA in the iontophoresis, shown in Table 1, becomes larger, regardless of ethanol. An aqueous ALA solution is acidic; for instance, pH of 0.6 mol/l ALA solution is 1.9. Since pKa of ALA in water at 25° is 4.1 and 8.9 [28], moreover, ALA molecules are likely to be converted into the positively charged ions. Hence, the charged ALA ion is repelled by the similarly charged anodal electrode and is absorbed readily through the skin by the iontophoresis, which enhances the ALA skin permeation.

Along with Figure 2, the Kp of ALA in Table 1 indicates that the ALA permeation was accelerated by ethanol. From Eqns. 1 and 2, the transdermal delivery of a drug was governed by D and K of the drug. As shown in Table 1, the K of ALA in the iontophoretic delivery was significantly enlarged by ethanol, but the D was almost constant. It is considered, therefore, that ethanol enhances the partition of ALA into YMP full-thickness skin, leading to acceleration of permeation of ALA in iontophoretic delivery.

Anodal iontophoresis brings about not only flux of cationic ions, but also flux of a solvent owning to electroosmosis [29]. Electroosmosis can also deliver neutral compounds such as urea, mannitol, and sucrose [30]. In this study, the electroosmotic flux of ethanol may occur in the mixed solvent and readily penetrates it into the YMP full-thickness skin, which gives rise to the synergistic effect of the combination system of iontophoresis and ethanol on the ALA skin permeation.

The authors would like to thank Yuko Ishii for her technical assistance in the early stage of this work.