An important area of application of polymeric film coating of tablets is to protect against moisture degradation [1]. Aspirin for instance is moisture degradable and therefore its tablets require protective coating. Polymer films for this area of application should have a high moisture resistance and should dissolve or swell and disrupt when in contact with aqueous fluids to allow disintegration and dissolution of the tablet, otherwise bioavailability will be compromised. A previous study [2] has indicated that film coating of tablets will invariably lead to increase in disintegration times.

The acrylatemethacrylates are water insoluble but swellable polymers. The presence of cationic (quaternary ammonium) groups in the polymer chemical structure confers the hydrophilic swelling property. Thus, the higher the cationic content the higher the porosity and permeability of resulting films [3]. The polymers have been investigated as binders in tableting [4], microencapsulation of drug particles for controlled release application [5].

The present study investigates their applicability in protective coating of aspirin tablets against moisture degradation. Pursuant to this objective the water uptake potentials of the tablets, their disintegration times and dissolution rates were determined.

Two analogous acrylatemethacrylate copolymers designated here as A and B were received under the trade names Eudragit RL and RS, respectively from Rhom Pharma, Darmstadt, Germany. A and B differ only in their cation content in the ratio 2:1(A: B) and have an average molecular weight of 1 50 000. Glycerol triacetate (Sigma-Aldrich, Italy) and ethanol (analar grade, BDH) were used as plasticiser and casting solvent respectively in the formulation of the coating fluid. Aspirin tablets BP were used as substrate (core) in the coating procedure.

A sample of the polymer A or B (5 g) was dissolved in ethanol (100 ml) by overnight stirring. In another aspect of the study, the polymers A and B were mixed in different proportions to form the coating fluid with intermediate cation content (Table 1). Glycerol triacetate was added as plasticiser in a concentration of 0.5% w/v to the coating fluid. Aspirin tablets (n=30) were placed in a laboratory-coating pan (Manesty, UK. Model 75096) whilst the tablets were rotating in the pan, the coating fluid was applied in three aliquots of 5 ml each allowing 5 min drying at 60° between each application and drying finally for 1 h also at 60°.

Table 1: Intermediate polymer cation content obtained by mixing a and b in different proportions

The thickness of the tablets (n=10) were measured with a digital micrometer before and after coating. The difference divided by two gave the film thickness. The tablet thickness before coating was 3240 µm and after coating was 3300 µm (tablets coated with polymer A) and 3296 µm (tablets coated with polymer B). The calculated mean film thickness was 30±8 µm (A) and 28±6 µm (B). The tablet hardness (kg) was determined using a Monsanto hardness tester (Monsanto Chemical USA). Twenty tablets randomly selected were used and mean values are reported. Tablet disintegration test (DT) was determined in 0.1N HCL at 37±0.5° by the British Pharmacopoeia method [6]. Six tablets were used in each determination. Mean values are reported.

A humidity chamber was created by placing a beaker of supersaturated solution of sodium chloride (500 ml) in a glass chamber giving a relative humidity (RH), 78% at the ambient temperature, 30o. The weight of the tablets (previously equilibrated in a dessicator for 24 h) was individually determined using a sensitive electronic balance (Mettler Toledo B154, Switzerland) and then placed in a humidity chamber for various time intervals up to a maximum of 24 h. At pre determined time intervals the tablets were removed from the humidity chambers and re-weighed. The percentage (%) increase in weight was taken as the moisture uptake. Different humidity chambers were used for the different sampling intervals such that the tablets were not in contact with the external environment during the storage interval in the chambers.

The stirred beaker method described earlier [7] was followed. In the procedure, aspirin tablet (300 mg) was placed in a basket of mesh size 450 µm which was in turn immersed in dissolution medium i.e. 800 ml water at 37±0.5o, which was stirred 100 rpm with a Gallenkamp single blade stirrer. At specific time intervals a sample (5 ml) was withdrawn from the leaching fluid. The sample was heated to 1000 to allow for complete hydrolysis to salicylic acid. Freshly prepared ferric chloride solution (5% w/v, 1 ml) was then added. The sample was allowed to stand for 5 min during which a blue colour developed. Absorbances of the coloured samples were read at λmax 540 nm in a UV spectrometer (Unicam, Sp500). The experiment was carried out in triplicate; and the mean absorbances were used to obtain the amount of drug dissolved at the different time intervals.

Mixing polymers A and B in different proportions gave a means of varying the cation content of the polymeric coating. The data in Table 2 indicated that as the cation content increased; DT decreased correspondingly. This finding is attributable to the potential of the cationic groups for promoting hydrophilic swelling of the films [3], leading to their eventual rupture during disintegration test. 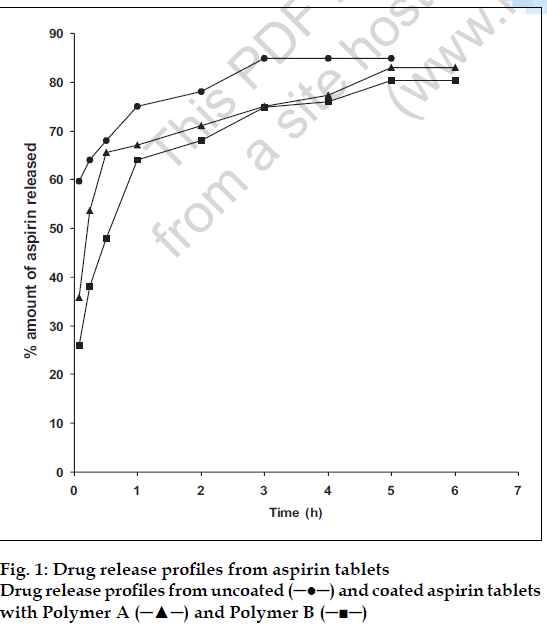 The results are presented in fig. 2 which shows that the uncoated tablets absorbed moisture more rapidly than the coated tablets, attributable to the barrier property of the films against moisture transmission. Polymer B, exhibited a slightly stronger barrier property compared to A. The difference can be associated with the higher content of the hydrophilic cationic groups in A. As the cation content increased the extent of moisture uptake will also increase (Table 2). This is attributable to the higher cationic content, hence higher porosity and permeability of resulting films [3]. 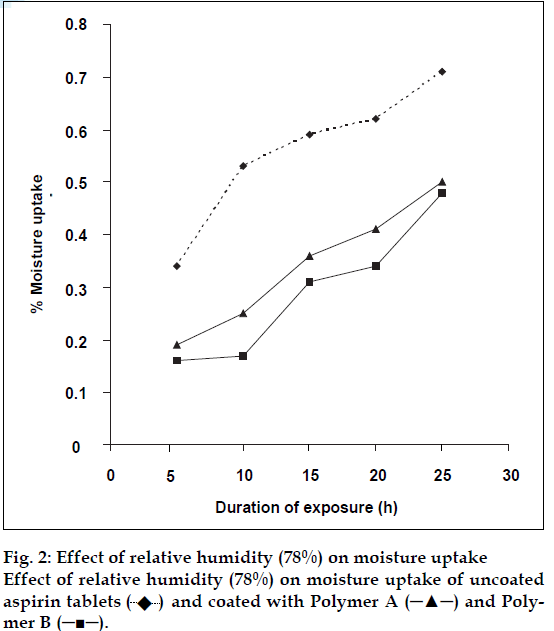 In conclusion, film coating with the acrylatemethacrylate effectively protect the tablets against moisture uptake. However, polymer B impaired the disintegration and dissolution properties of the tablets. Hence, it is not applicable in the protective coating of the tablets. Whereas polymer A will be suitable for the protective coating of the aspirin tablets against moisture uptake. Polymer B is not considered suitable because of its effect on the disintegration and dissolution profiles of tablets.