Cerebral ischemic stroke, commonly known as stroke, includes ischemic stroke and haemorrhagic stroke[1]. It is a disease of brain tissue or cell necrosis[2]. With the development of society, the incidence of stroke has also increased year by year, which has been one of the most fatal sudden diseases in China[3]. Cerebral ischemic stroke is characterized by focal (or holistic) neurological deficits. Ischemic stroke accounts for 75 to 90 % of all strokes, while hemorrhagic stroke accounts for a minority[4], accounting for only 10- 25 % of all strokes. Therefore, research on prevention and treatment of ischemic stroke should be the key to the treatment of stroke. In general, the incidence of ischemic stroke in males is higher than that in females, higher in the north than in the South and higher in the cities than in the countryside[5]. In addition, the mortality rate of ischemic stroke in one month after cerebral infarction is 3.5-5.0 %, while the mortality rate in three months after cerebral infarction is 8.9-9.8 %. With the breakthrough of diagnosis and treatment of stroke, the death rate of stroke has been greatly reduced[6]. There are many complications in stroke patients, including brain oedema and increased intracranial pressure, dysuria and urinary tract infections, pressure sores, nutritional disorders and post-stroke affective disorders, which have a great impact on the physical and mental state as well as living conditions of patients[7]. Cerebral ischemia injury not only damages local brain tissue and its function, but also leads to acute blood-brain barrier damage, increases the permeability of blood-brain barrier, and causes a series of molecular events[8].

Cerebral ischemia injury can also result in lipid peroxidation of membranes, thereby impairing the structure of membranes and the function of sodium pump. The degree of cerebral ischemic injury is directly related to the duration of ischemia. Within a few minutes after ischemic injury, incomplete ischemia causes reversible damage, and most cells enter a slow and reversible apoptotic process[9]. Prolonged ischemia would lead to infarction, which is necrosis of local brain tissue due to ischemia. Neuronal apoptosis is the main factor in brain tissue and cell death. Chronic hypertension might result in cerebral ischemia damage. This is due to the over excited mood, extremely fast heart rate and high blood pressure leading to cerebral vascular rupture[10]. After cerebral ischemia injury, the active substances released by inflammatory cytokines can cause vasoconstriction, decrease blood flow in brain area, damage endothelial cells in brain area, and result in primary brain edema[11]. Rehabilitation nursing training can overcome the inadequate exercise and improve the upper limb motor dysfunction after stroke[12]. Commonly, rehabilitation nursing training is mainly divided into 2 aspects. On the one hand, it is necessary to restrict the movement of the healthy side of the body. Furthermore, a large amount of repetitive and intensive training must be performed on the unhealthy side of the body[13,14]. Based on the above background, the effect of rehabilitation nursing training on nerve repair in rats with ischemic stroke, the protective mechanism of rehabilitation nursing training on brain tissue of rats with cerebral ischemic injury, and the effect on neuron apoptosis were studied, so as to provide a strong theoretical basis for the clinical prevention and treatment of ischemic stroke.

Adult male Sprague Dawley rats (SD rats, 240-290 g, 6-9 w old) were used in the experiment. All rats were purchased through regular channels. After purchasing, the rats were fed with standard rodent feed for about 1 w in the animal room. Rats were provided free access to food and water. The indoor temperature was controlled at 20±2° and the relative humidity was controlled at 54 to 60 %. The daily light time was controlled between 8 and 12 h. Rats allowed to adapt to the environment as soon as possible. After adapting to the environment, rats were randomly divided into the sham group, non-exercise group and early-exercise group.

Longa thread embolization method was used to simulate cerebral ischemia-reperfusion injury in rat MCAO model. Rats were anesthetized with isoflurane. Mechanical and endotracheal intubation was used for ventilation. After the preparation, the rats were fixed on the operating table in supine position. A transverse incision was made in the middle of the neck. The skin was cut about 2 cm with a scalpel to open the neck. The left common carotid artery, external carotid artery and internal stiff artery were exposed. The superior thyroid artery was clamped with a coagulator and the distal end of the external carotid artery was ligated. The left common carotid artery and the internal rigid artery were temporarily closed with clips. The scalpel was used to cut an incision in the external carotid artery and a silicone head thread bolt was inserted into the internal rigid artery. The timing began as soon as the silica gel head line bolt reached the beginning of the middle cerebral artery (MCA) along the external carotid artery. Once the rats were fully awake, the silica gel thread plug was fixed, the clamp was removed, the suture incision of the left common carotid artery was opened and the tracheal intubation was removed. After 1.5 h of ischemia, the silicone head thread was completely removed from the anesthetized rat brain and the rats were fed back to their original position after awakening. The experimental procedure of the sham-operated group is similar to that in MCAO, but there is no need to insert a silicone head thread bolt.

In this experiment, the rats were trained on an electric treadmill rehabilitation exercise. This kind of treadmill was a completely closed speed controllable electric treadmill with horizontal and backward continuous transmission of electrical track. At the tail of the electric track, a row of electric fences was set up to shock the tail of the rat so that the rat could actively crawl at the set speed on the electric track. The closed electric treadmill training was designed to imitate human running. Like the treadmill, the time and speed of movement in time could be adjusted and quantitative data was recorded. In the process of sports training, attention should always be paid to the physical condition and performance of rats, so as to avoid the occurrence of overwork. According to the previous experimental results, the intensity of treadmill training for rats could be increased. Three days before MCAO, the rats were trained for 5-10 m/min, 5 min a day, and the welladapted rats were put into the group for operation. The training steps of the rat treadmill were as follows, First, one day after MCAO, the rats in the early care training group were trained on the treadmill. The training was conducted at the same time and in the same location. Animals in the control group were grabbed similarly, but did not undergo treadmill training.

SD rats were anesthetized by intraperitoneal injection of 12 % chloral hydrate (0.4 ml/100 g) and 0.8 % of saline (220 ml) was perfused from the left ventricle. The saline should be sterilized prior to perfusion. Then, the left ventricle should be continuously perfused with 5 % polyformaldehyde solution (120 ml). The rats were fixed in supine position on the operating table and the brain tissue was removed with a scalpel. The brain tissue was immersed in a mixture of 5 % paraformaldehyde and 15 % sucrose. Next, rat brain tissue was taken out, cleaned and re-immersed in a 0.1 M phosphate buffer containing 35 % sucrose. After the rat brain tissue was deposited on the bottom of the container, it was removed from the solution. The dehydrated brain tissue was then cut into coronal sections with a thickness of about 35 μm using a freezing microtome. The brain tissue sections were immersed in the in situ hybridization protection solution and preserved at room temperature of -20°±2.

The SD rats were anesthetized by intraperitoneal injection of 12 % chloral hydrate (0.4 ml/100 g body weight). After deep anaesthesia, the rats were decapitated and killed. The rats were quickly fixed on ice in supine position. The ischemic ipsilateral cortex was quickly separated with a scalpel. Then, the cerebral cortex was immersed in tissue lysate (450 μg/450 μl) and homogenized every 10 s with an electric homogenizer for a total of 2. The fully homogenized homogenate was placed on the ice for 12 min and poured into the prepared EP tube. The EP tube was weighed and the brain slices were shattered with an ultrasound crusher. Next, the brain slices were decomposed every 12 and 10 s for a total of 3 times. The EP tube was placed in an ice box for 10 min and transferred into a refrigerator of –4°±2 and frozen for 30 min. After centrifugation at 12 000 rpm for 20 min in a cryogenic high-speed centrifuge, the total protein was absorbed from the supernatant. At that point, the protein concentration was determined and the total protein was stored in a refrigerator of –78° after sub-packing.

All data were processed by SPSS19.0 statistical analysis, and the data were expressed as mean±standard deviation (x±s). The data were analyzed by factor variance analysis and compared by post hoc Schaffe tests, and p<0.05 was statistically significant. 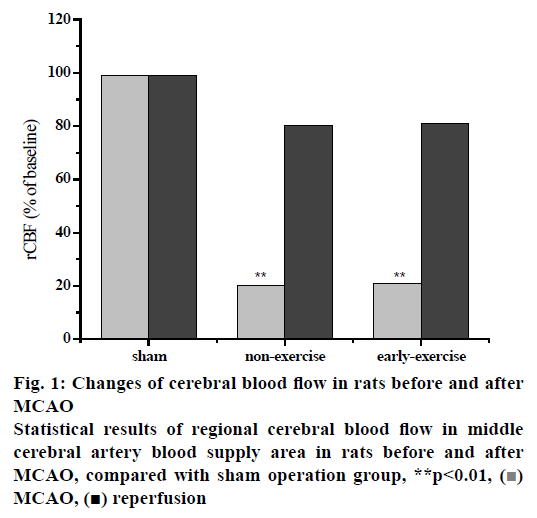 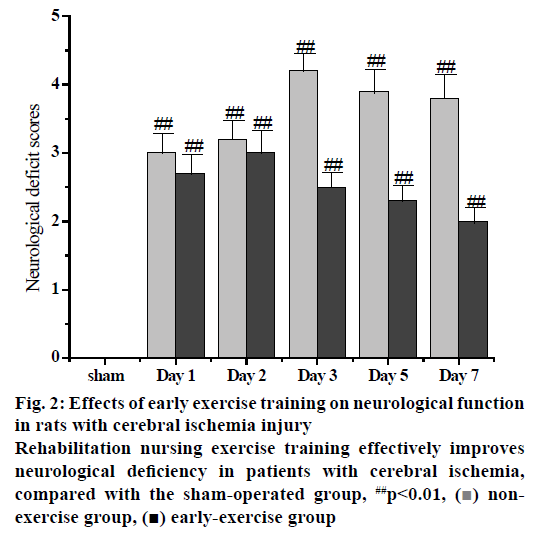 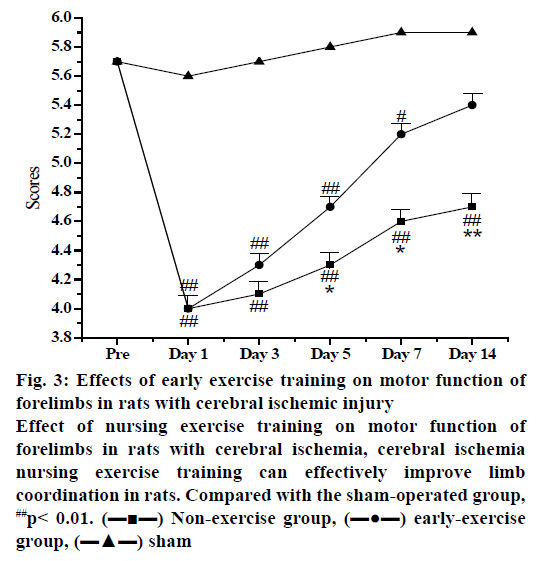 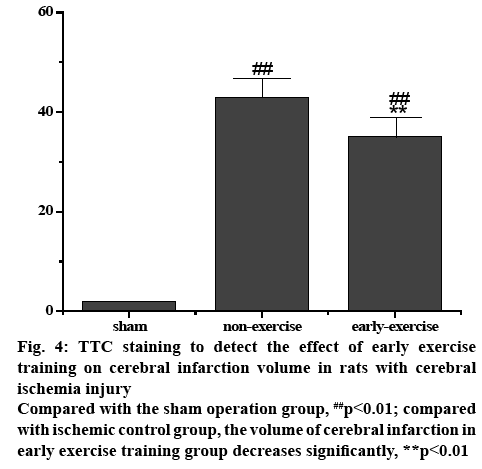 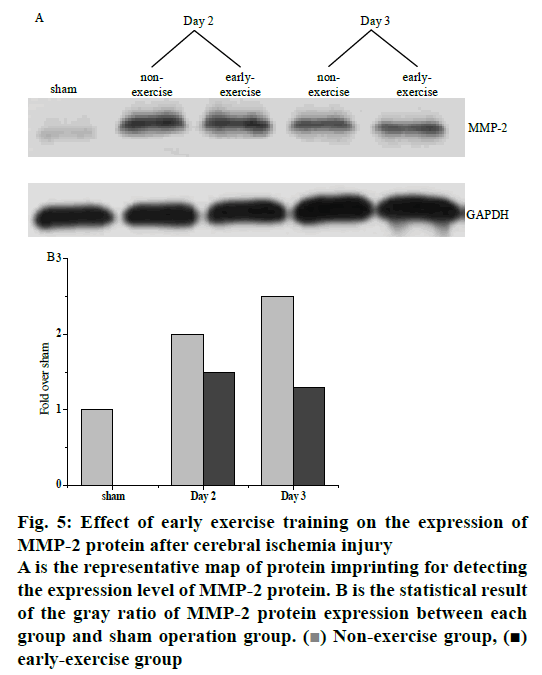