Effect of Ultrasonic Stimulation on Mechanical Properties of Alginate Beads

Ultrasonic stimulation has been used in drug delivery systems as an external stimulation to manipulate the drug release from different carriers such as beads, capsules, liposomes, and polymeric micelles [1]. Each type of carrier has its own release behavior, which can be controlled by varying the power, frequency, and duration of the ultrasonic stimulus. The primary reasons of this change in the release behavior are the cavitations, thermal effect and acoustic streaming produced by the propagation of ultrasonic waves in solutions [2].

Under an ultrasonic stimulation, the cavities implode and generate extremely high energy shock waves. This phenomenon can be used to scissor polymer molecules in solutions [3] and also to degrade the polymer matrix surfaces. Kost et al. reported that an increase up to five-fold is observed in the degradation rate of polyanhydrides, polyglycolides and polylactides when they are exposed to an ultrasonic stimulus of 5 w/cm2. The main chain rupture of the polymers was thought to be induced by the shock waves created during the cavitation. However, the ethylene-vinyl acetate (EVA) copolymer matrices exposed to an ultrasound stimulus of 2.5 w/cm2 do not show any degradation [4]. Thermal effect is concomitantly produced by the implosion of cavities and energy conversion during the propagation of ultrasonic waves. It increases the temperature of the aqueous solution and affects the materials in the solution. The thermal effect is especially evident on thermo-responsive materials. The radiation pressure force causes acoustic streaming, which tends to push the target material along the direction of wave propagation. Passive cell membrane permeability has been observed in vitro in the systems where it is possible to produce ultrasonic streaming.

Alginate is a biocompatible, degradable and non-toxic biomaterial [5,6]. It has been widely used as a drug carrier and cell culture environment material [6]. Ultrasonic stimulation of alginate gel improves the drug release or changes the absorption of ions [7]. Alginate gel is a thermo-sensitive material [8]. Physical changes of alginate can be shown in physical properties [9]. Ultrasonic stimulation induces three main effects: acoustic streaming, acoustic thermal effect and cavitation [10]. The response of alginate beads to an ultrasonic stimulus can be detected by investigating their physical properties [11].

A compression method was used to measure the bead deformation and the compression forces exerted on beads. The beads were compressed between two rigid parallel plates and the varying distance between the two plates was recorded. Although different theoretical models have been used to experimentally evaluate the compression depending upon the geometry of samples [10], we used the Hertz law [11] (Eqn. 1 shown below), to calculate the shear moduli of the solid spherical beads obeying Hooke's law. The compression force variation for a spherical bead positioned between the two rigid plates is expressed as Eqn. 1: F(t)=8μr20(δ(t))1.5/3(1-v), where μ and ν are the shear modulus and Poisson’s ratio of the bead material, respectively, and r20 is the original radius of the bead. Since the Poisson’s ratio of alginate beads has been found to be 0.5 [12], the force F(t) predicted by the Hertz law therefore becomes Eqn. 2: F(t)=16μr20(δ(t))1.5/3. Thus, we deduced μ for each pair of F(t) and δ(t) values, which were measured experimentally.

A computer controlled traction/compression device (Synergie 400, MTS Systems, France) was fitted to a 2 N force transducer (accuracy 10-4 N). An alginate bead was placed on the lower plate within a transparent cup filled with the 1.7% calcium solution and its shape was continuously monitored by a CCD camera (JAIM150, Imasys S.A., France). The images were captured with the Scion Image software (Scion Image, Scion Corporation, USA) and were analyzed with Image J 1.42 q (National Institutes of Health, USA). As shown in (Figure 1A), contour analysis was performed to detect the bead edge and the initial height (D0) and width (L0) of the bead. The bead was almost spherical and its volume was computed assuming it to be axisymmetric. The apparent radius (r0) of the bead, which is defined as the radius of a sphere with a volume equivalent to the measured bead volume, was calculated to be 1.12±0.01 mm. The alginate bead was compressed by a piston which moved down at a constant speed of 0.6 mm/ min. This speed was low enough to eliminate the effect of inertia and large enough to avoid potential osmotic effects. At each time step, the acquisition system automatically recorded the imposed displacement of the piston D(t) and the resultant force exerted on the piston.

The initial contact point between the piston and the bead corresponded to D (0)=0. It was determined with a precision of ±20 μm. The ratio D (t)/D0 (δ) is the compression ratio. The buoyancy force acting on the piston was subtracted from the measured force to determine the net force F(t) acting on the bead. The variation of F(t) as a function of δ represents the compression curve.

Every six beads were collected to form a batch and were put into a tube with 2.5 ml of the 1.7% calcium chloride solution. The batch was dispersed in the solution and was ultrasonically stimulated by a sonotrode (7 mm diameter) (MS7, Hielscher, Germany) assembled in a 30 kHz ultrasonic generator (UP50H, Hielscher, Germany). To investigate the influence of ultrasonic stimulation on the alginate beads, three parameters of the ultrasonic generator were changed: the pulse mode percentage (fp), ultrasonic power (Ps), and ultrasonic duration (ts). Three sets of experiments were carried out. In each set, one of the parameters was varied by keeping the other two fixed to determine the effect of the varying parameter on the shear modulus of the alginate beads. Each experiment was conducted on six alginate beads. Their shear modulus (μ) was measured by compression using the Hertz model after the stimulation. Their diameters (D) were measured from the captured images.

Effect of thermal stability on the shear modulus of alginate beads

A big container filled with 1 l of the 1.7% calcium chloride solution was used as the cooling tank. For conducting the stimulative experiment, the alginate beads were put in this container. The modulus of the alginate beads kept in a small tube varied under the influence of the ultrasonic stimulation. The cooling equipment absorbed the heat energy produced by the ultrasonic stimulation and maintained the temperature of the solution at room temperature. In these experiments also, we could change the three parameters of the ultrasonic generator mentioned above. Three sets of experiments were carried out. In each experiment, one of the parameters was varied by keeping the other two constant to determine the effect of the varying parameter on the mechanical properties of the alginate beads. In the Hertz model, a batch of every sixth alginate bead was compressed to monitor the mechanical properties of the beads.

Figure 2: The stability of alginate bead. 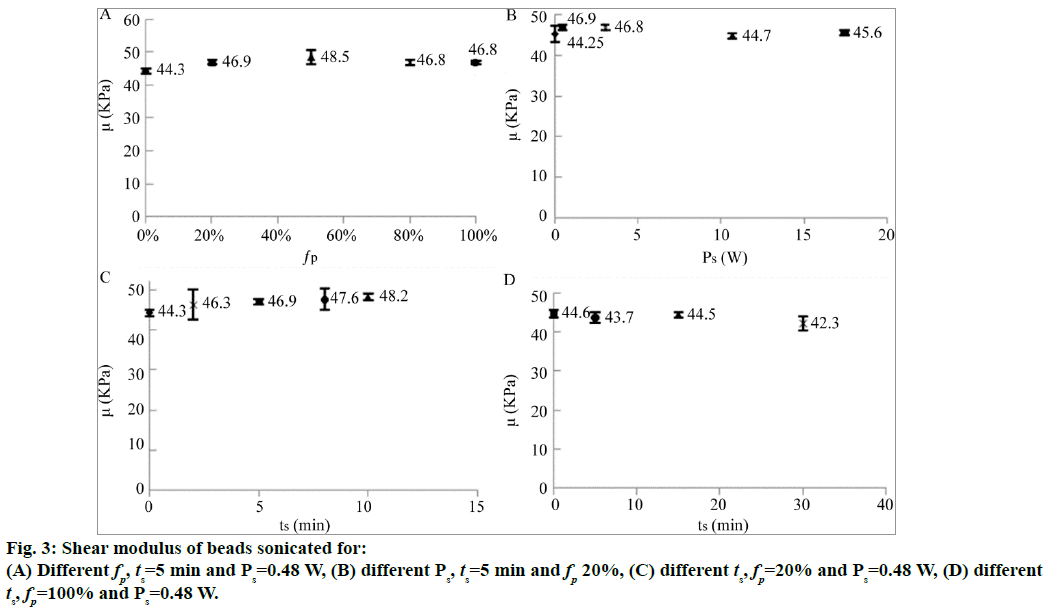 The sonication of the five batches of the preserved alginate beads was then carried out by varying the stimulation duration (ts) and keeping the parameters fp and Ps fixed at 20% and 0.48 W, respectively. The shear moduli are shown in Figure 3C. Only a small increase was observed in the shear moduli with an increase in the sonication time. Since, the variations were smaller than the experimental error, nothing can be said about the significance of this result.

From the three tables, it can be observed that the temperature of the stimulated solution in the tubes increased with an increase in Ps, fp and ts. This can be due to the conversion of the ultrasonic energy into heat energy during the stimulation. An increase in the solution temperature causes alginate gel to shrink (Figure 4A). The shrinking ratio can be up to 10% [13] and has a linear relationship with the temperature [14]. Thus, we can state that the exponential increase in the shear moduli of alginate beads arises because of the shrinkage of the beads (Figure 4B).

The shear modulus of the alginate beads in our study was found to be around 42.5 kPa and was relatively constant for the compression ratios in the range of 5-15%. Hence, a good fit between the experimental and theoretical compression was obtained. Ouwerx et al. [15] have previously characterized alginate beads made up of 1.5% alginate solution by compression. They obtained a shear modulus of about 53 kPa, which is higher than that obtained by us. The difference may be due to the method used for the compression. Ouwerx et al. conducted the compression on slightly dried beads, which resulted in an increase in the shear moduli of the beads. Leroux et al. [16] conserved the alginate beads fabricated using a 2.0% alginate solution in 0.0018 M (0.02% w/v) calcium solution for 15 h. They obtained a shear modulus of 24 kPa. This value was lower than that obtained by us. This difference is attributed to the difference in the calcium solution concentration (0.02% vs. 0.8% in our case).

Gelation of alginate is required for achieving a stable state and is time consuming process [17]. On the basis of our results, we can conclude that a gelation time of 24 h is sufficient to stabilize the alginate gel, and its stability can be sustained for at least 16 d. According to some previous reports, alginate beads reach their stable state after about 15 h of conversation in a calcium solution. Hence, the gelation time used in this study was optimum.

Ultrasound assisted and pre-ultrasound treatments have been used for enzyme immobilization. It has been shown that the diffusion coefficient (De) increases with an increase in ultrasound power until it reaches the highest value, which is determined by the theory of enzyme immobilization using ultrasound assisted treatment [18]. Considering the ultrasonic stimulation of alginate beads, Ciuti et al. [19] reported that an increase in fp supplies a high ultrasonic power to the sonicated volume. Nevertheless, in our study, we hardly observed any significant variation in the mechanical properties of the beads. This difference could be a result of using the cooling equipment in our experiments.

In conclusion, we investigated the mechanical properties of alginate beads by carrying out a compression test. The analysis was carried out using a Hertz model at small compression ratios. The shear modulus was constant within the compression ratio range of 5-15%. Thus, the estimation of the shear modulus in this range was reliable. We found that the alginate beads had to be conserved in a calcium solution for one day so as to reach a stable state. The stability of the conserved beads was sustained for at least 2 w.

The authors declared that there is no conflict of interest.