China has a large population, and although the incidence of breast cancer is very low, the total number of new breast cancer patients per year is second only to the United States, ranking second in the world[14]. Although many people suffer from breast cancer, there is still no recognized feasible scheme to promote the early detection of breast cancer in China, which makes Chinese women unable to regularly undergo breast cancer screening, and their awareness of early detection is also weak[15,16]. Though breast cancer screening has started in some big cities in China since the 1970s, the human, material and financial resources for screening are relatively limited. There are gaps and imbalances in technical equipment and people's cultural level between urban and rural areas and between different regions[17,18]. Therefore, an effective early detection plan should be formulated according to China's specific conditions and national conditions. Although BSE is considered to be a healthy behavior for early detection of breast cancer, the implementation of BSE in Chinese women is not optimistic[19]. Studies suggested that health education could improve women's knowledge, beliefs and attitudes towards BSE in the future, and promote inspection behaviour. However, with the passage of time, the number of people who insist on BSE gradually decreases[20]. Thus, regular health education for breast cancer prevention and adherence to BSE are the key to the success of secondary prevention of breast cancer.

From January 2013 to January 2019, a total of 600 women aged 35 y from People's Hospital of Changyi City were selected as the research subjects. Then, according to the demographic variables (age, urban and rural distribution, marital status, educational level, and occupation), a control group was set up according to the principle of avoiding contamination. The experiment group received health education intervention, while the control group received different health knowledge education. In the control group, the detection time was irregular, or no breast test was performed for more than one year. In the experimental group, after intervention, subjects underwent breast examination twice a year, and the patients with breast nodules were tested once every 3 and 6 mo. After intervention with different health measures, the same group of subjects were surveyed again with the same questionnaire. 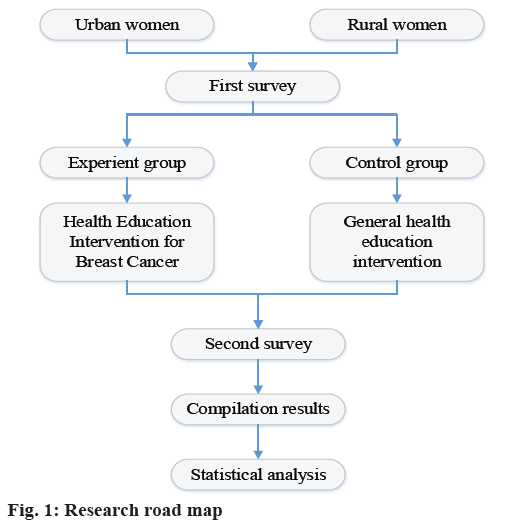 Inclusion criteria: the permanent residence of the city, the population living in the area for six months; women aged 40 y and over, and women aged 35 y and over; those who have primary school and above education level, literacy and reading ability; mentally and physically healthy women without breast cancer symptoms. Those who volunteered to participate in the study, agreed and signed the informed consent after explanation.

Exclusion criteria included those who refused to participate in, patients with breast cancer or those who have undergone unilateral/bilateral breast cancer resection and currently in good health; those with a history of mental illness in the past and medical workers.

Both the first and second surveys were cross-sectional surveys, which were conducted by the researchers themselves through self-filled questionnaires. At the beginning of the survey, women were asked to explain the purpose and significance of the study in detail, to explain the way and confidentiality of filling out the questionnaire, and women participated willingly. Questionnaires were distributed uniformly in class, filled in centrally and retrieved in class. In order to ensure true and reliable information, the questionnaire was anonymous. All questionnaires were retrieved and coded uniformly, and then statistics and analysis were carried out. The questionnaire was compiled according to China's actual situation and research objectives, and revised repeatedly on the basis of pre-experiment. It was revised into a questionnaire consisting of five parts, the birth date, urban and rural distribution, educational level, marital status, occupation and self-perceived health status of the respondents were investigated.

Reliability and validity of questionnaires:

In the above formula, k is the total number of items in the scale, Si2 is the variance of the score of the i-th item, and ST2 is the variance of the total score. Construct validity: it is to understand the intrinsic attributes of a tool, reflecting the degree of integration between the tool and the theoretical or conceptual framework on which it is based. Structural validity is usually considered as the most powerful evaluation index of effectiveness. Factor analysis is often used to examine the structural validity of the scale. It is generally believed that the common factor of the scale can explain more than 50 % of the variation, and that each item has a sufficient load (≥0.4) on the corresponding factors, the scale has a good structural validity. Sample size estimation: according to the intervention effect of additional control in the field survey of health education, the calculation formula of sample size was obtained. n = (μα+ μβ)22p(1–p)/(p1–p2)2, where, p1 and p2 were estimated values before and after intervention, and p was merger rate.

The experiment group, in order to ensure the effect of health education on early detection of breast cancer, the experiment group was divided into several groups according to the different communities of urban and rural areas and the respondents. The average number of health educators was about 30 simultaneously. Before health education, the questionnaire, atlas of early breast cancer detection, and record sheet of BSE were distributed centrally. Subjects were required to fill in questionnaires before lectures. The time of filling in the questionnaires was about 15 min. Then, health education on breast cancer early detection knowledge and methods of breast cancer early detection, especially the content of BSE methods, was carried out. The lectures were focused on videos of BSE, demonstrations and feedback with breast silica gel models, and lasted for about 2 h each time. After the health education activities, informed women about referring to books and BSE records and regularly adhering to the implementation of health behaviour. During the 6 mo study period, telephone follow-up, interviews and counselling were conducted according to the different educational levels of urban and rural respondents to know the implementation of early detection of breast cancer, and to answer women's questions. Each person was guided for an average of 1-2 times. After the 6 mo study, second evaluation was conducted, using the same tools as before.

Control group, the first survey was conducted with the same questionnaire, and then health education intervention was conducted for general diseases. The classroom focused on knowledge of hypertension, heart disease, diabetes, cancer and other common diseases, but did not involve knowledge of breast cancer. There was no atlas of early detection of breast cancer, only the records of BSE were issued. No intervention was given during the six-month study period, and the second evaluation was conducted half a year later, using the same questionnaire as before.

Each questionnaire recovered was numbered and the data entered into Excel spread sheet for sorting out and to import it into SPSS20.0 statistical software for analysis. Frequency and percentage were used to describe classification variables, and mean and standard deviation were used to describe continuous variables. P<0.05 showed that there was statistical significance. Descriptive analysis was used to reveal the distribution of research variables, such as women's general information, breast cancer prevention knowledge, HBM variables and breast cancer early detection behaviour. The changes between urban and rural areas, experiment group and control group, and before and after health education were compared by Chi-square test (Fisher's exact test if necessary) and Mann-Whitney U test. The multi-choice binary classification method was applied before the analysis of multiple-choice questions. To study the related factors affecting breast cancer early detection behaviour of urban and rural women, unconditional logistic regression analysis was used to determine the variables that have significant impact on breast cancer early detection health behaviour.

Four variables of knowledge, BSE attitude, health belief (HBM) and α coefficient of HBM as a whole were calculated, respectively. The statistics of α coefficient were shown in fig. 2. The reliability coefficient was between 0.747 and 0.897, indicating that the reliability was good, so the original content was not modified.

Among 600 respondents, 300 were in the experiment group and control group, respectively; 53.2 % were in urban areas and 46.8 % in rural areas; the age distribution of the respondents ranged from 35 to 80 y, with an average age of 49.8±9.13 y; only 9.8 % were in primary and lower-level schools; 12.3 % were divorced, widowed and unmarried in marital status; 28.8 % were in household women, 35.8 % were working women and 58.7 % were feeling good about their health. The baseline information of the experiment group and the control group was compared, as shown in fig. 3. There was no difference in the distribution of urban and rural areas, age stratification, educational level, marital status, occupation, and self-perceived health status between the two groups.

The women who had knowledge of BSE were 64.2 %, but only 30.6 % of women had studied BSE. There were many women who knew about BSE but had not implemented it, and 53.1 % of them did BSE. Only 2.5 % of the women had BSE every month, and only 5.3 % of the women had BSE regularly. From the data point of view, it is essential to improve women's BSE behaviour. Health education intervention was carried out in the experiment group, and statistics were applied again in the control group after general education. In the experiment group, 98.6 % of the people knew about BSE, 94.5 % learned about BSE, and 91.3 % implemented BSE. The number of women who had BSEs per month reached 22.4 %, and the number of women having regular BSEs reached 40.1 %. In the control group, 76.8 % knew about inspection of breast, 53.6 % learned about inspection of breast, and 63.2 % implemented inspection of breast. Only 4.7 % of the people did BSE monthly, and only 12.5 % did BSE regularly. As shown in fig. 4, 6 mo later, the understanding and implementation of BSE of experiment group was higher than those in the control group, and the difference was statistically significant. The proportion of BSE, regular BSE, and monthly BSE among BSE instructors who had received BSE at baseline and half a year later was higher than those who had not studied BSE. The difference was statistically significant, suggesting that it is very necessary to carry out health education for early detection of breast cancer. ) intervention in experiment group, B. understanding of breast inspection before (

), D. implementation of breast inspection before (

) intervention in experiment group, E. implementation of breast inspection before (

) intervention in control group, F: comparison of breast inspection before and after intervention between the experiment ( ) groups before and after intervention, B. frequency comparison of breast self-examination before ( ) intervention in experiment group, B. the implementation of CBE before (

) groups, D. the implementation frequency of CBE before (

) intervention in experiment group, E. frequency of CBE before (

) intervention in control group, F. comparison of CBE implementation frequency before and after intervention between the experimental (