Medical adherence is one of the important factors influencing treatment effectiveness in human immunodeficiency virus (HIV) infected patients receiving antiretroviral drugs[1-3]. Strict medical adherence leads to a better immune function, a lower chance of viral resistance and a reduced viral load. Generally, antiretroviral regimens can cause the inconsistency of medical adherence due to a number of pills to be taken, a high frequency of medication intake, the difficulties in keeping the medicine and the medication side effects. Even though there have been attempts to improve medical adherence, for instance, prescribing fixed drug combination, taking multiple medications for different times at once and developing of new regimen to reduce side effects, inconsistent medication behaviors still occur and might lead to unsuccessful treatment[4,5].

Several factors have been found influencing medical adherence. Knowledge regarding HIV infection and antiretroviral drugs is one of those factors. Pharmacist as a healthcare provider can play a significant role in improving medical adherence through patient counseling and education[6-8]. However, inadequacy of pharmacists as well as miscommunication between pharmacists and patients makes the counseling difficult. Integration of technology into the process of counseling may provide more effective outcome.

Infographic media is one of the most recent and effective communication technologies that can be used in the field. It applies images to convey the information or knowledge, which can stimulate the interest of patients, reduce the time used in deducing the intended information, provide a positive impact on the long-term data memorization and influence the behavioral changes of patients[9-13]. The objective of this study is to integrate motion infographic media (MIM) into counseling process and further examine its effectiveness on improving knowledge and medical adherence of patients who receive antiretroviral drugs.

MIM was adapted from the previous work of Chongpornchai, et al.[14]. Conceptual framework of the media was obtained from academic documents and operation manuals[4,5,15], along with the survey and inspection from clinical pharmacist at a HIV clinic. Knowledge content was divided into two parts: HIV infection and antiretroviral drugs. The screenshot in fig. 1 displayed MIM examples, which explained information related to HIV infection and antiretroviral drugs in Thai language.

The study was conducted at Outpatient department, HIV clinic, Saraburi hospital from September 2018 to November 2018. Subject inclusion criteria were as follows: participant was a HIV-infected patient, had age older than 18 y, received antiretroviral drugs for more than 1 mo, had signed an informed consent form, resided in Saraburi province until completion of the study and did not have difficulties in listening, speaking, reading and writing Thai language and did not have memory disorders.

The study has been approved by the Human Research Ethics Committee of Faculty of Pharmacy, Silpakorn University (COA no.7/2018). Each participant gave a written informed consent before enrolment. The trial was registered on the Thai Clinical Trials Registry, number TCTR20180725003. Fig. 2: Room for providing MIM to patients in study group

Medical adherence was measured using self-reported adherence and pill count method. The self-reported adherence questionnaire was adapted from the surveys of Adult Acquired immunodeficiency syndrome (AIDS) clinical trials group (AACTG)[17]. Good adherence (100 %) indicated that subjects had never forgotten to take medicine. The pill count method was performed by pharmacist. Both methods would be calculated to render the percentage of medical adherence from the following formula.

If there was more than one medicine on the prescription, the average of all percentages would be calculated and represent the adherence.

As soon as subjects arrived the clinic on the first visit, they were asked to fill demographic questionnaire, knowledge questionnaire and self-reported adherence questionnaire. The remaining antiretroviral pills were counted and recorded. Knowledge scores obtained during this period were used as pretest data. MIM was provided afterward only to subjects in the study group for 15-20 min. Subjects in both groups subsequently received routine counseling regarding HIV disease and medications by clinical pharmacist. After the counseling process, all subjects were asked to re-answer the same knowledge questionnaire. Knowledge scores obtained after counseling process were used as posttest data. On the second visit (1 mo later), knowledge scores were retested and recorded as follow-up test data and the medical adherence was measured using the same tools which were done on the first visit.

SPSS statistical program was used for data analysis with the significance level at a p-value less than 0.05. Demographic characteristics of patients were summarized as frequency, percentage, mean and standard deviation. Categorical factors were examined by Chi-squares test or Fisher’s exact test (if the expected value was less than 5). Differences in means between two groups were analyzed by independent sample t-test or Mann-Whitney U test (if data distribution were not normal). Two way mixed model analysis of variance (ANOVA) with between subjects variable (Group: study and control) and within subjects variable (Time: pretest, posttest and follow-up test) was utilized to compare mean differences of knowledge scores. Bonferroni post hoc t-tests method was further applied if the differences were significance. For medical adherence results, Wilcoxon signed-rank test was used to compare mean percentage differences for paired data from the first and second visits in each group as well as Mann-Whitney U test employed for independent subjects.

Table 1 presented the demographic characteristics of participants. There was no statistical difference in any characteristics between groups. The average age for all subjects was 41 y old. Most of them were males with at least primary school education. They had a good level of cluster of differentiation 4 (CD4) and viral load. Mean treatment duration for both groups was longer than 5 y. Despite taking concomitant drugs, most of them were vitamin supplements. About 60 % of participants took none fixed drug combination regimen twice a day.

SD stands for standard deviation, *Based on independent sample t-test, **Based on Chi-squared test, ***Based on Fisher's exact test 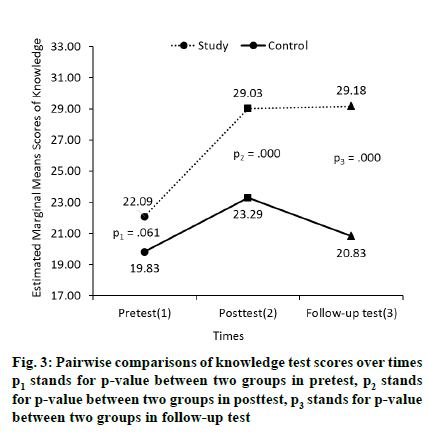 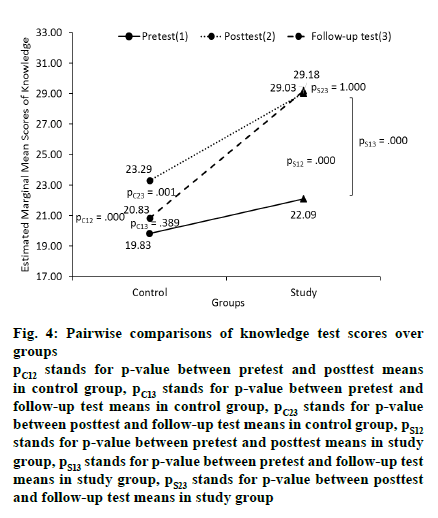 SD stands for standard deviation, *Based on Mauchly’s test for sphericity assumed (p=0.146)

It should be noticed that knowledge test scores on both groups were significantly improved after subjects received the counseling and the study group had significantly higher knowledge scores on the followup test than those in the control group. However, knowledge scores of participants in study group on the follow-up test were a little higher as compare to those in the posttest despite being tested 1 mo apart.

SD stands for standard deviation, *Based on Wilcoxon signed-rank test

Table 3: Comparison of Medical Adherence Between First and Second Visits in Each Group

SD stands for standard deviation, *Based on Mann-Whitney U test

Table 4: Comparison of Medical Adherence Between Study and Control Groups in Second Visit

A number of studies have been attempting to integrate technologies into the counseling given by healthcare providers in HIV clinics. The technologies were tested and showed the effectiveness[16,18-24]. However, such technologies are sometimes impractical to be used because of difference of the HIV clinic. This study adopted the concept of the motion infographics to improve the media that is easy to use, able to publicize in various channels and practical for using in HIV clinics in Thailand.

The results of knowledge test scores were consistent with an increase in the percentage of medical adherence. This was consistent with previous studies suggesting that infographic media is more attractive to the audiences than other conventional communication means[11-13].

Subjects in study group had significantly higher knowledge test scores regarding HIV infection and antiretroviral drugs, coinciding with previous reports suggesting that integrating technology into the counseling better improved the knowledge in patients not doing so[16,21]. Interestingly, this knowledge scores were not decreased after the period of 1 mo, in accordance with the study of Turk et al.[11], suggesting that “infographic affects the long-term memory”.

The results indicated that medical adherence was improved when MIM was provided to patients. This is in accordance with previous studies with the results demonstrating good medical adherence[16,18-24]. It was also implied that utilization of technology acted as a tool to convey medical information during counseling to improve medical adherence of patients compared with no technology.

\The result also presented that very high adherence was found in both study and control groups. This may be due to two possible reasons. Firstly, all HIV patients in Thailand can freely access to antiretroviral drug due to the support by the government through Universal Health Coverage Service Scheme. Secondly, the subjects are well aware of being assessed by counting pills as normal, which is the practice of the hospital pharmacy service during their receiving medical care.

HIV-infected patients receiving antiretroviral drugs had better knowledge on the infection and medications as well as good medical adherence after receiving MIM during counseling. This study provided a strong evidence to support the use of MIM as a counseling tool, which can be used by pharmacists, for patient education.

This was a preliminary study conducting in HIV patients at Saraburi hospital. In addition, clinical evaluation focused only on the medical adherence. No other clinical outcomes, such as CD4 or viral load, were measured to confirm the consistency of medical adherence. As the self-reported adherence method was completed by patients, some of them might not accurately remember if they had missed taking the medication because of the long intervals between visits. Furthermore, this research intended to gain the overview data. So, it did not specify the samples with poor medical adherence. As most of the participants had good medical adherence record, the behavioral change was not clear but visible. Lastly, the knowledge on HIV infection and antiretroviral drugs is only the influencing factor that can be directly provided by pharmacist to improve medical adherence. With technological innovations, various counseling issues can be solved. Treatment effectiveness then may be improved.

Future research should include more subjects with multiple setting. A large number of subjects with poor knowledge regarding the infection and inconsistent medical adherence should be included in order to get more reliable and effective results.

This research is successfully completed by the generous cooperation of all healthcare providers and patients from the HIV Clinic, Saraburi hospital, Thailand. The authors would like to thank Dr. Krittika Tanyasaensook, Mahidol University for providing information which helps to improve the quality of this work.