The cell line used in this study was MCF-7 human breast cancer cells purchased from Tumor Cell Repository of the Chinese Academy of Medical Sciences. This research was approved by the Ethics Committee of the Affiliated Traditional Chinese Medicine Hospital of Nantong University.

The cryopreserved MCF-7 human breast cancer cells were shaken to dissolution in 40° water bath once these were fetched out. The temperature 40° was maintained with the help of a digital water bath (BH series precision). Then 2 ml of medium (10 % PBS, 1 % of 500 ml double-antibody mycillin and RPMI- 1640 medium) was added followed by centrifugation at 1000 rpm for 5 min. The supernatant was discarded. Cells were resuspended in complete medium before they were transferred to culture flasks for sub culturing with 5 ml of the medium. These cells were placed in a CO2 incubator (37°, saturated humidity 95:5 % CO2) and on the next day, as the cellular fusion rate was up to 80- 90 % the cells were treated for continuous passage. MCF-7 human breast cancer cells used were divided into the control group, low concentration group, moderate concentration group and high concentration group. Twenty four hours after the inoculation, the medium was replaced by serum-free medium accompanied with the addition of Szechwan Chinaberry extracts for pretreatment for 24 h. Later, the cells were being starved for another 24 h before the medium was replaced by serum-free media. On daily basis, Szechwan Chinaberry extracts were applied followed by extraction of cellular proteins 48 h after. Within a total of 4 wells, 1 μl of PBS solution, and sterile saline solution, 25, 50 and 75 nM Szechwan Chinaberry extracts were placed respectively for cultivation.

The prepared cell suspension using the cultured cells above was added into wells of a 96-well plate, 90 μl each. The observation points for cells in the control, low, moderate and high concentration groups were at 12, 24, 36, 48, 60 and 72 h after the injection. Five replicate wells were set aside for each group to be added with different concentrations of Szechwan Chinaberry extracts. Cells of the control group were treated in each well with 10 μl of the culture medium and then cultivated for the same temporal periods as that in groups subjected to 3 different concentrations of extracts. Once the time was up, 20 μl of MTT was added into each well for 4-h incubation. Then, as the supernatant in wells was absorbed, 150 μl of DMSO was added followed by shaking for 10 s. The OD values of groups at 570 mm were measured in a microplate reader. The proliferation rates of MCF-7 human breast cancer cells were calculated using the following formula, % proliferation rate = (OD value/reference value-1)×100.

Cells of the 4 groups were placed into a 5-well plate for cultivation at 37°, CO2 concentration of 5 % with saturated humidity, within 12, 24, 36, 48, 60 and 72 h respectively, before 0.25 % of trypsin solution was added for digestion. Later, the cells were collected by centrifugation at 2000 rpm for 5 min and washed with PBS buffer twice for 3 min each time. Once again, centrifugation at 2000 rpm was applied to separate cells which were collected and dissolved in 1 ml of PI staining solution, placed aside for 1 h in the dark at room temperature. Once being labeled with specific fluorescence, the cells surrounded by rapidly flowing sheath fluids emitted photons which may be detected by a flow cytometer in terms of the photon numbers. The apoptosis was in this way measured and the technique used was the TUNEL technique (Volker, Cancer letters 1949:1;125-131,2003).

Breast cancer cells in the logarithmic phase were treated into a cell density of 3×105 cells/ml before they were resuspended in blood serum medium of 1 %. In each chamber 100 μl of the cell suspension prepared was injected, and the Transwell chambers was placed on the culture plate followed by the addition of serumfree medium, set aside for 30 min until the completion of matrigel rehydration. After 24 h of cultivation with the cell suspension prepared and blood serum medium in saturated humid environment, the cells in chambers were washed with PBS buffer and fixed by paraformaldehyde and then subjected to crystal violet staining for 15 min in each group. Once again, PBS buffer was used to rinse the cells 3 times. Finally, 5 fields randomly selected were photographed under the microscope to count the number of cells, which shall be repeated 3 times in each group.

Seventy two hours after the cultivation in various concentrations of Szechwan Chinaberry extracts, MCF-7 cells were collected and 1 ml of 1 % ethanol solution was added for immobilization at 4° overnight. PI (50 μg/ml) was used to stain, before the incubation in dark for 0.5 h at 4°. The distribution of cell cycles was detected using the flow cytometer.

The collected samples were rinsed 3 times with PBS buffer, which was then separated out, and applied with IP cell lysate for 35 min before the total proteins were extracted and determined by bicinchoninic acid assay (BCA method). At a density of 20 μg/well, the collected proteins that have been treated with concentrated SDSPAGE sample loading buffer for 15 min were subjected to SDS-PAGE gel electrophoresis at 100 V, 10 min. Later, the membrane was soaked in 10 % milk and sealed on the shaking table at 37°, 1.5 h. TBST was used to dilute the primary antibody β-actin (internal control) at a ratio of 1:1000. In combination with the primary antibody, the membrane was incubated at 4° overnight and stored. On the next day, it was rinsed with a TBST buffer and treated with the second antibody for incubation within 1 h, followed by repeated rinsing in TBST buffer. At the end, following the instructions of developing and fixing kit, the developing agent was applied for substrate coloring.

SPSS21.0 statistical software was used for data analysis. Measurement data were expressed in mean±standard deviation (SD). In terms of comparison among multiple groups, F tests were adopted. As to pairwise comparison, independent t-test shall be used. P<0.05 was considered as statistical significance. 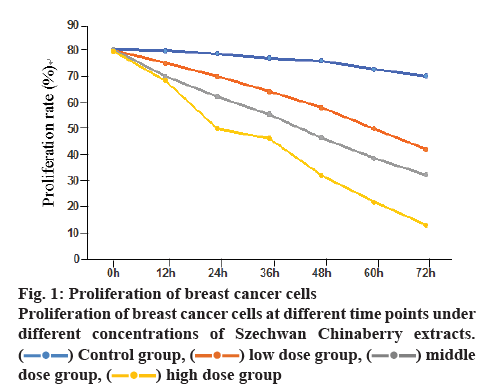 Figure 4 showed that the proportion of cells in G0/G1 and S period decreased significantly, while those in G2/M period increased notably, with the increase of concentration of Szechwan Chinaberry extracts. The differences revealed statistical significance as well (p<0.05). 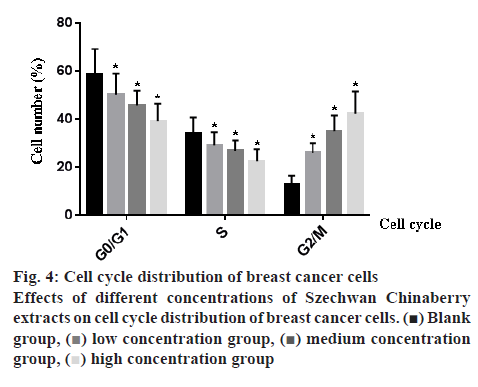 At present, the therapy of breast cancer included operation, radiotherapy, chemotherapy, endocrinotherapy and targeted therapy[5,6], among which the operative treatments, although they are usually the preferred choice, may be denied by most female patients because this affects body aesthetics[7-9]. Treatment for cancers with plant extracts has been a hotspot in the medical field. Given the single monomeric composition of plant extracts, those anticancer components can be easily separated and purified, with respect to breast cancer, would inhibit cancer growth in a more scientific and accurate way[10,11]. In this investigation, MCF-7 human breast cancer cells were treated with Szechwan Chinaberry extracts, followed by detection of cell proliferation, apoptosis, migration and cyclic distribution using MTT assay, immunofluorescence, trans well assay and flow cytometry respectively, so as to determine the intervening effects of the extracts on these cells and their clinical applications.

Transwell assays were applied to determine the migration of breast cancer cells. As the results showed, different concentrations of extracts produced varied migration effects. The maximum of migrated cells was observed in the control group, while the minimum found in the high concentration group, indicating some blocking effects on the migration of breast cancer cells by the Szechwan Chinaberry extracts. In terms of cyclic distribution, with the intervention of Szechwan Chinaberry extracts, the proportion of cells in G0/G1 and S period markedly decreased and the proportion of cells in G2/M period increased. These results revealed that the inhibition of Szechwan Chinaberry extracts on breast cancer cells may also be realized by altering the distribution of cell cycles.

Studies have pointed out that tumor metastasis, by which the tumor cells break away from their own cell population to a new organ where they form new tumors, has made the planned therapeutic regime more difficult to implement. Control of metastasis therefore has been an effective method for cancer treatment[21]. ICAM-1, the member of immunoglobulin superfamily, is one kind of important surface adhesion molecules.

In conclusion, the Szechwan Chinaberry extracts effectively inhibited the proliferation and migration of breast cancer cells in a concentration-dependent manner by changing the distribution of cell cycles, in addition promoted the apoptosis of tumor cells. The research in this paper shall provide vital theoretical basis for future treatment of breast cancers.