In order to study the effects of different anesthesia methods on nearest taxon index, mean arterial pressure, heart rate, S-100β protein and other indicators in elderly patients undergoing abdominal surgery, 127 elderly patients hospitalized for abdominal surgery were selected as the study subjects. According to the degree of anesthesia, they were divided into 2 groups one received deep anesthesia and the other shallow anesthesia. The above mentioned indicators were observed in both groups of patients after surgery, to explore the influence of different anesthesia methods on elderly patients. There was no statistical difference in basic information between the two groups, while there was statistical difference in nearest taxon index, mean arterial pressure and heart rate between the two groups (p<0.05). Comparing and analyzing postoperative cognitive dysfunction, postoperative delirium, mini-mental state examination and clock-drawing tests between the two groups, it was found that there was no statistical difference in the comparison of mini mental state exam and CDT scales alone, but the comprehensive comparison between them was more objective and comprehensive, namely post-operative cognitive dysfunction, with statistical difference (p>0.05). In the analysis of serum S-100β protein in two groups, it was found that deep anesthesia not only prevented the increase of S-100β protein, but also quickly restored to the initial level. Therefore, through this study, it is found that different depths of anesthesia has no significant effect on the cognitive function of the elderly, but deep anesthesia has a lower incidence of post-operative cognitive dysfunction than shallow anesthesia and can effectively reduce the level of S-100β protein in patients.

With the progress of society, people's living standards are constantly improving. At the same time, human health has become the focus of attention. As a vulnerable group in society, the elderly often has more emergencies when they are ill; especially when they need surgery, they need to pay more attention to many things[1]. Postoperative delirium (POD) and post-operative cognitive dysfunction (POCD) belong to the category of cognitive decline after surgery, especially after general anaesthesia, which is the most common condition in the elderly. After this condition occurs, patients will need more hospitalization time, higher medical expenses, delayed rehabilitation and lower living standards after surgery. It could lead to complications and death of patients, so it is very important to master the anaesthesia methods and depth of anaesthesia[2,3].

At present, the mechanism of POCD occurrence is not clear. Age is the only definite risk factor for POCD nowadays. A large number of studies show that POCD is closely related to the age of patients and is one of the most common complications of elderly patients after surgery[4]. The occurrence of POCD in elderly patients after abdominal surgery is likely to make the patient's response to various adverse factors weakened and to cause various complications such as abscess, pulmonary hemorrhage and intestinal and gastrointestinal tract infarction[5,6]. Bi-spectral index (BIS) is a more accurate method to monitor the sedation level and depth of anaesthesia by electroencephalogram (EEG). It has been approved by the USFDA for its good correlation with various narcotic drugs[7]. The BIS monitor integrates the phase, frequency and power characteristics of different EEGs into a single variable, and presents them with numbers ranging from 0 to 100. Different numbers represent different anaesthesia depths. By observing the dynamic changes of BIS value, anesthesiologists can predict the depth of anaesthesia and avoid causing too deep or too shallow anaesthesia during operation, which is conducive to the overall control and understanding of the anaesthesia operation process[8,9]. Under BIS monitoring, it is significant to study the effect of different anaesthesia depth on POCD in elderly patients[10]. Up to now, the incidence of POCD is still in the exploratory stage and due to the synergy and interaction of various situations, it is difficult to accurately predict the disease and diagnose it in the clinic. Therefore, this investigation is very essential since it aims to explore the effects of different anaesthesia levels on the physical indicators of the elderly.

In summary, although there are many related studies on POCD, there are still no good methods and means for dealing with the occurrence of POCD in elderly patients. Therefore, 127 elderly patients hospitalized for abdominal surgery were selected as the research subjects, and were divided into two groups according to the degree of anaesthesia, deep anaesthesia and shallow anaesthesia. By observing the relevant indicators in both groups of the patients after surgery, the effect of different anaesthesia levels on elderly patients was explored, with a view to provide new ideas for the treatment of abdominal diseases in the elderly.

In order to better understand the effects of different anaesthesia methods on human related indicators, many researchers have studied its role. Lee et al. studied the effect of anaesthesia in the treatment of bronchial hypertrophy. The results showed that chest computed tomography and fiberoptic bronchoscopy after anaesthesia provided the diagnosis of the airway. If airways are suspected, these examinations are helpful in assessing and managing airways[7]. Bodner et al. studied the perioperative management of patients undergoing thyroidectomy and found that preoperative assessment was helpful to determine the comorbidity and surgical characteristics of patients with increased perioperative risk, and to identify patients with possible airway difficulties[11]; Kreutziger et al. explored the effects of different anaesthesia methods on shoulder pain relief, and the results suggested that whether general anaesthesia, local anaesthesia or intravenous analgesia alone, outpatients can complete shoulder reduction. The clinical results measured by SF-36 and DASH were comparable in the three groups, but the overall operation time was the shortest and patients' satisfaction was higher[12].

One hundred and twenty seven elderly patients hospitalized for abdominal surgery in the First People's Hospital of Tonglu County from February 2014 to April 2019 were selected as subjects. The age ranged from 60 to 80 y, with an average age of 68.7±3.4 y. There were 59 male patients and 68 female patients. According to American Society of Anesthesiologists (ASA) classification I~III, there were 40 ASA grade I patients, 49 ASA grade II patients and 38 ASA grade III patients. Generally, general anaesthesia with tracheal intubation was used during abdominal operation, and the operation time was estimated to be 2-4 h. The study was approved by the Ethics Committee of The First People's Hospital of Tonglu County and informed consent was signed by patients and their families.

The results were assessed before induction (T0), 2 h in the operation (T5), after the operation completed (T6), after extubation (T7) and 24 h after operation (b). The data were analysed by repeated variance analysis. Postoperative cognitive impairment was analysed by international POCD composite Z-score method.

Delirium was assessed by the CAM on day 1 before operation and the d 3 after operation[13], which included four aspects, 1. the course of acute attack and fluctuation; 2. inattention; 3. incoherence of thinking and 4. change of consciousness. Delirium can be diagnosed with one of 1 and 2 or 3 or 4.

Double blind method was used to investigate and record the data. Investigators were trained in POD, POCD, MMSE, VAS, CDT and other assessment tools. If they could use them independently and correctly, they could start the investigation. Before the investigation, the investigators gave a brief description of the survey tools for patients, including content, method, role, and so on. They made a preliminary investigation for patients. After the preliminary investigation, they began to investigate. The survey was conducted by two persons, one person was responsible for introducing the survey tools and describing the methods, and the another person was responsible for recording the survey data. The survey was completed after both persons confirmed that the survey data were correct. In the course of investigation, patients needed not be disturbed by external factors and should complete it independently.

Epidata3.1 software was used to establish the database. All data were entered by two persons and two copies. Logical verification and spot check were carried out. If the qualified rate of spot check was above 96 %, the data was considered valid. The effective data were analysed by SPSS22.0 software. The descriptive analysis was used to analyse the patient's measurement data. The homogeneity of variance was analysed by t-test, and the counting data by x2-test. The results showed that there was statistical significance with p<0.05 showed significant difference.

From Table 1, the basic information of the two groups can be obtained, including the proportion of male and female, average age, average height, average weight, type of operation, ASA classification, average operation time and anaesthesia time. There was no statistical difference between the two groups (p>0.05, fig. 1). 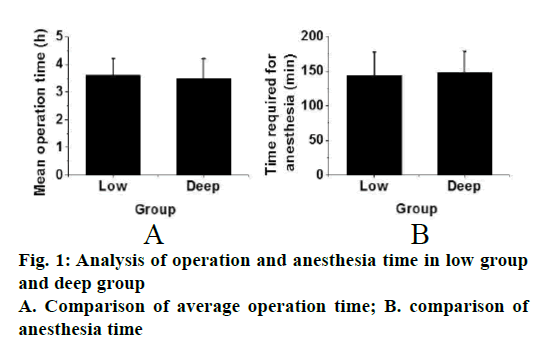 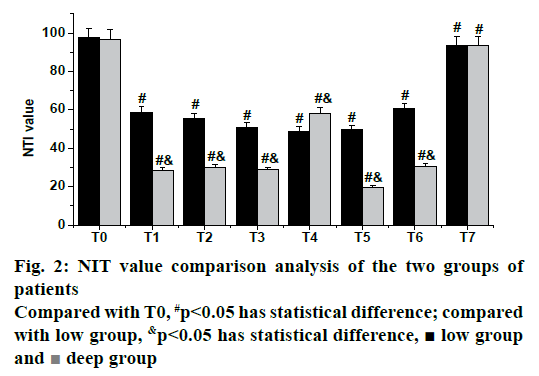 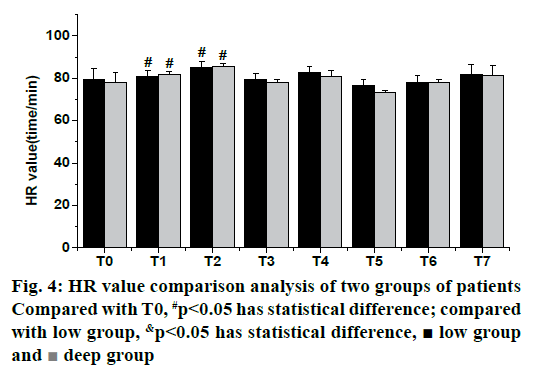 As shown in Table 2, the intraoperative condition, anesthetic dose and VAS score of the two groups were compared and analysed. It can be found from the table that the dosage of anaesthetics used in the deep group was higher than that in the low group (p<0.05), and there was no statistical difference in VAS scores during and after operation between the two groups (p>0.05). Therefore, there was no significant difference between the deep group and the low group in VAS scores during and after operation, except for the dose of anaesthetics. 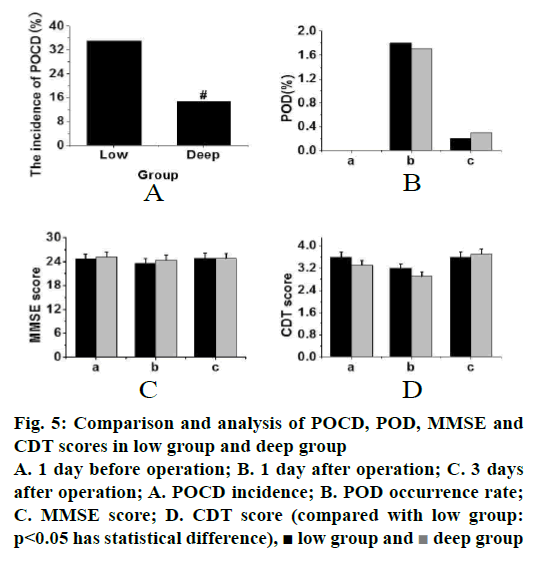 In order to study the effects of different anaesthesia methods on NTI index, MAP, HR, S-100β protein and other indicators in elderly patients undergoing abdominal surgery, 127 elderly patients hospitalized for abdominal surgery were selected as the research subjects. According to the degree of anaesthesia, they were divided into the deep group and the low group. The effect of different anaesthesia methods on elderly patients was explored by observing the related indicators in the two groups of patients after surgery. There was no significant difference in basic information between the two groups (p>0.05) but there were significant differences in NIT, MAP and HR between the two groups (p<0.05). Comparing and analysing POCD, POD, MMSE, and CDT between the two groups, it was found that there was no significant difference in the comparison of MMSE and CDT scales alone, but combining both resulted in a more objective and comprehensive comparison, namely POCD, with statistical difference (p>0.05). In the analysis of serum S-100β protein in two groups, it was found that the deep anaesthesia not only prevented the increase of S-100β protein, but also quickly restored it to the initial level.

In conclusion, by exploring the relationship between different anaesthesia modes and various indicators of elderly patients, it is found that different depths of anaesthesia has no significant effect on postoperative cognitive function of elderly patients, but the deep group has lower incidence of POCD and can effectively reduce the S-100β protein level of patients compared with the low group, which provides experimental data for surgical treatment of elderly patients. However, there were still some deficiencies in this study, such as the small sample size in the experimental process, unable to accurately explore its mechanism. Therefore, it is necessary to increase the sample size to further explore the mechanism.