The aim of this study was to investigate the bioavailability of Allium hookeri root extracts and evaluate its beneficial effects on hydrogen peroxide (H2O2)-induced oxidative stress in cultured H9C2 cardiomyocytes. After H9C2 cardiomyocytes were treated with the AHE, a substantial decrease in the H2O2-induced cytotoxicity was observed in a dose dependent manner. These results suggest that AHE has beneficial effects on cardiac dysfunction which can be used as a valuable supplement in the health-care products.

Allium hookeri is a plant species that is native to south Asian countries including India, Burma, Sri Lanka and South western China [1]. Recently, the plant is successfully cultivated in other countries of South and Southeast Asia such as Korea where it is valued as a food supplement. Furthermore, this plant and/or its extracts are anticipated to have ameliorative properties to several human diseases [2] such as diabetes, other metabolic syndromes and allergy [3,4]. However, no reports are available about its effectiveness in complicated disorders of diabetes.

A. hookeri is one of the new imported plant species in Korea where it is known with its common names such as Hooker chives, SamChe (in Korea) and is used as an alternative food additive in many countries. However, the effects of this plant, especially the roots (fig. 1) and its extracts on oxidative stress in heart are not recognized so far. In the present study, the decrease in hydrogen peroxide-induced cytotoxicity was ascertained in rat neonatal cardiomyocytes (H9C2) after the administration of A. hookeri roots extracts to determine the ameliorative effect of plants and its extracts on circulation disorders [5,6,7]. Then, we examined the ameliorative effects of water extracts of A. hookeri (AHE) on hydrogen peroxideinduced cardiomyocytes damaged by cytotoxicity test.

To obtain the rat heart myoblast cell line, H9C2 cells were purchased from the Korean Cell Line Bank (KCLB, Seoul, Korea). All chemical reagents were obtained from Sigma-Aldrich. Initially, roots of A. hookeri obtained from the Hyejeong Farm (Bosung, Korea) were thoroughly washed with water and freeze dried. For extraction of the sample, 100 g of dried samples were homogenized with distilled water by a Waring blender (HMF-1710; Hanil) to 2-4mm particle size. The freeze-dried sample (moisture content: <5%) was stored in a -80° freezer for further study. To determine the cell viability, EZ-Cytox Cell Viability Assay Kit (Daeil Labservice, Korea) or MTT assay was used [8]. Cells were inoculated overnight in a 96 wells plate in CO2 incubator and further incubated with various concentration of extracts or H2O2 (Sigma) for 24 h. After treatment, cells were coincubated with 10 μl of Ez-CyTox solution for 20 min in a CO2 incubator. Then, absorbance measurements and calculation of the proliferation rates were carried out according to the manufactures instructions. Data was demonstrated by relative growth inhibition to phosphate buffered saline (PBS, pH 7.4) treated cells. All data were expressed as mean±S.E.M. Statistical comparisons were performed using oneway ANOVA test. Significant differences between groups were determined using the unpaired Student’s t test. Statistical significance was set at P<0.05. 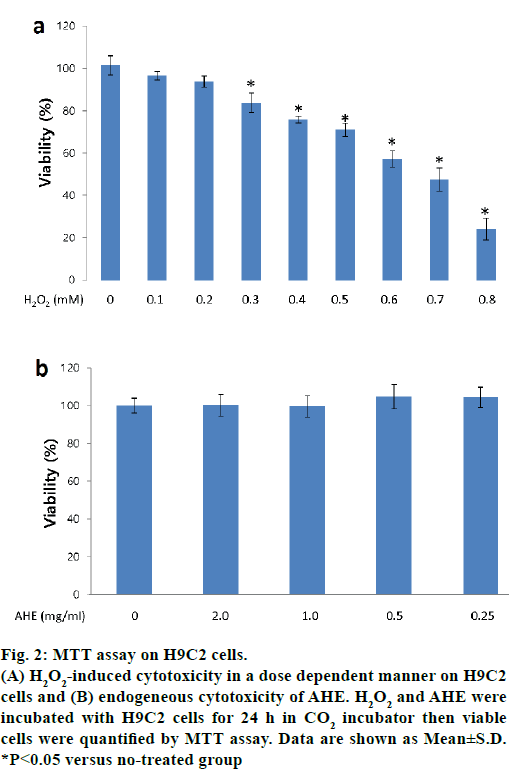 Fig. 2: MTT assay on H9C2 cells. (A) H2O2-induced cytotoxicity in a dose dependent manner on H9C2 cells and (B) endogeneous cytotoxicity of AHE. H2O2 and AHE were incubated with H9C2 cells for 24 h in CO2 incubator then viable cells were quantified by MTT assay. Data are shown as Mean±S.D. *P<0.05 versus no-treated group

The reducing effects of AHE on H2O2-induced H9C2 cell death were compared with that of the normal and the control groups. As shown in fig. 3, the cell viability of the H2O2 treated group was markedly decreased than normal group but AHE treated group recovered the cell viabilities at all concentrations. Although, relative high concentration AHE (2 mg/ ml, w/v) shows reducing effects of H2O2-induced cell death and serial diluted AHE shows similar effects. These results suggest that AHE has the potential to reduce the risk of heart problem such as hypertensive heart disease and diabetic cardiovascular diseases. 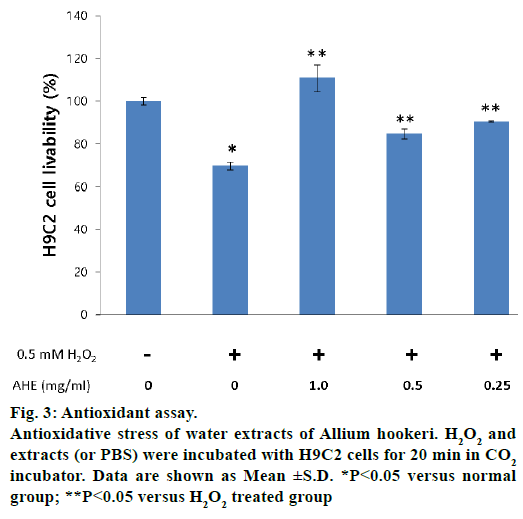 This work (C0184853) was supported by Business for Cooperative R&D between Industry, Academy, and Research Institute funded by Korea Small and Medium Business Administration in 2014, and the research funds from Nambu University (K.-H.P.).