Effects of Cyathula officinalis Kuan Extracts on Hypertension-induced Renal Vascular Remodeling by Inhibiting the Expression of ALD, Renin, Ang II and the Activation of Erk1/2 and P38 Signaling Pathways: A Mechanistic Study

Clinical hypertension is classified as essential hypertension and secondary hypertension. Essential hypertension is an independent disease that defined high blood pressure as the main clinical manifestation due to nonspecific lifestyle and genetic factors[1,2], accounting for more than 90% of all hypertensive patients, and its pathogenesis remains unknown. Hypertension is one of the most common cardiovascular disease, characterized by high incidence, high mortality and high disability, and the incidence of the disease in adults was 18.8 % according to the 2002 epidemiology research of China[3]. High blood pressure can affect the structure and function of important organs such as heart, brain and kidney. Various complications caused by hypertension seriously threaten the life and quality of life of patients[4,5]. Prevention and treatment of hypertension is thus not only a problem of lowering blood pressure, but also of slowing or preventing damage to target organs. It is a hot issue in the world to find a new target to protect the target organ and to prevent the complications of hypertension[6]. Currently, it is generally believed that vascular remodelling is a structural and functional change of blood vessels in the process of growth, development, aging and diseases[7].

In the context of hypertension, vascular remodelling allows arteries to withstand the increased pressure load, but as a result, the vessels typically become more rigid than in their native state, and the reduced compliance decreases their ability to dampen the cyclical changes in blood pressure[8]. Vascular remodelling is not only an important pathophysiological change and the basis of pathogenesis of some cardiovascular diseases such as hypertension and diabetes, but also one of the important pathogenic mechanisms that cause damage to target organs[9,10]. Changes in blood pressure, which can lead to changes in wall thickness, are the first factors considered to be associated with vascular diameter and function[11]. Hypertension can cause vascular remodelling, and vascular remodelling can also cause increased vascular resistance. The vicious cycle of the two can eventually cause damage to target organs and functional insufficiency[12].

Extensive systemic artery involvement is the direct cause of pathological changes in target organs in hypertension. Small artery lesions are the most important pathological changes in hypertension. The small artery lesions in the tissues and organs can promote the maintenance and development of hypertension, and eventually lead to the ischemic injury of tissues and organs[13], among which renal arterial lesions are the most obvious injuries[14], and these verity of lesions is closely related to the blood pressure and the duration of the disease[15]. Persistent hypertension results in the vascular wall thickening, lumen stenosis, glomerular fibrosis, atrophy and renal arteriosclerosis, which ultimately lead to the renal failure[16]. The root of Cyathula officinalis Kuan is a widely used medicinal herb in China with a wide range of pharmacological activities[17]. The main components of C. officinalis extracts are alkaloids, including cyasterone, inokosterone and ecdysterone. The spontaneously hypertensive rat (SHR) is a well-characterized model representing primary hypertension of humans, which has obvious structural and functional changes in the early stage of hypertension. In larger renal cortical artery of 4-w old SHR, the area of the vessel middle wall and ratio of wall to cavity were increased and obviously with age accompanied by the damage and dysfunction of target organ[18,19]. C. officinalis extracts could decrease blood pressure and influence myocardial cell diameter in SHR, and the mechanism of antihypertensive effect might be associated with the inhibition of angiotensin converting enzyme and Ang II production, which leads to vasodilation and a reduction of blood pressure[9]. However, it is still unknown how C. officinalis extracts inhibit high blood pressure via its influences on vascular remodelling in the kidneys of SHR. To elucidate the effects of C. officinalis extracts on blood pressure and renal vascular remodelling in SHR, the expression of aldosterone (ALD), renin and angiotensin II (Ang II) and the activation of ERK1/2 and p38 signaling pathways were measured. In this investigation, C. officinalis extracts significantly ameliorated hypertension-induced renal vascular remodeling through inhibiting the expression of ALD, renin and Ang II and the activation of ERK1/2 and p38 signaling pathways.

Forty four male SHR rats (12 w, 256±20 g) were purchased from the Shanghai Institutes for Biological Sciences (Shanghai, China), and housed in polypropylene cages with sawdust bedding in hygienically controlled environment (23-25°) with a 12-h light/dark cycle throughout the study period. All animal care and procedures were in strict accordance with the China Laboratory Animal Use Regulations and were approved by the Institutional Animal Care and Use Committee at Putuo District people’s Hospital of Shanghai City (Shanghai, China).

The dried C. officinalis plant material (1.6 kg) was powdered and refluxed with 85 % ethanol for 10 times (3 times×1.5 h). The extracts were concentrated under vacuum and dried, and the so obtained C. officinalis extract yield was 79.2 g. C. officinalis extract (47 g) was resuspended in distilled water and submitted to sequential extraction with petroleum ether, dichloromethane, and n-butanol (5 times), to obtain the n-butanol fraction, which was concentrated under vacuum and dried, obtaining the ACO (33.5 g). The samples were stored at -4° until used.

The whole cell extracts from the kidney were prepared using RIPA buffer (Beyotime, Shanghai, China). After electrophoresis, proteins were electroeluted at 120 volts onto a polyvinylidene difluoride membrane. The membrane was incubated with primary antibodies against antiALD (Life Span BioSciences, Inc, LS-C27137), antirenin (Abcam, ab176127), antiphospho-ERK1/2 (CST,#9101), antiERK1/2 (Abcam, ab17942), antiphospho-p38 (CST,#9211), antip38 (CST,#9212), and antiGAPDH (CST, #5174) overnight at 4° and then incubated with a secondary antibody. GAPDH was used as a control for total protein input.

Secretions of ALD, renin and Ang II were determined by ELISA. Briefly, plasma collected from SHR with different treatments were mixed with 15 μl 10 % EDTA and 20 μl 200 IU aprotinin and then centrifuged at 400×g at 4° for 10 min. The serum was harvested and stored at -20°. The relative content of ALD, renin and Ang II in the serum of SHR was measured using an ELISA kit according to the manufacturer’s protocol.

Measurement of the toxicity of C. officinalis extracts:

Results were shown as mean±SD. All data were analyzed by SPSS 18.0 software (SPSS, Inc., Chicago, USA). Comparison was done with one-way ANOVA followed by post hoc test. P value of less than 0.05 was considered statistically significant.

All in vivo experiments were performed in accordance with the regulations for the administration of experimental animals in our university. The animal protocols were approved by the Animal Care and Use Committee (IACUC) of our University under reference No.7643/MMU/CH. 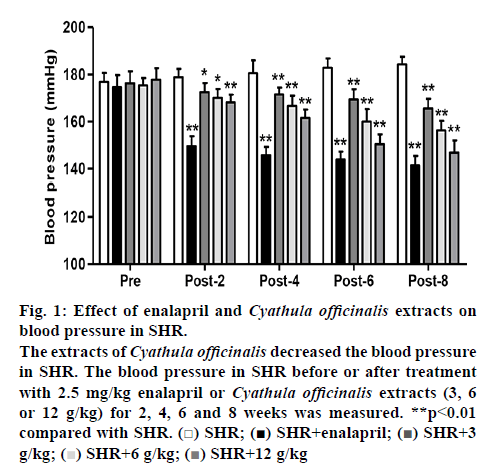 Figure 3: Effects of enalapril and Cyathula officinalis extracts on renin, ALD and Ang II in both serum and kidney of SHR
SHR treated with 2.5 mg/kg enalapril or extracts of Cyathula officinalis (3, 6 or 12 g/kg) for 8 w. A. Concentrations of ALD, renin and ang II in serum measured by ELISA, B. content of renin in kidney of SHR measured by ELISA, C. mRNA and protein expression of ALD, renin, p-ERK1/2, ERK12, p-p38, and p38 in kidney was measured by real-time PCR and D-F. Western blot. **P<0.01 compared with SHR.

Given the role that ERK1/2/p38 pathways as downstream effectors of RAAS mediated vascular biology and physiology, particularly, vascular remodeling[21], the expression of ERK1/2 as well as p38 and their phosphorylation levels was also examined by western blotting. As shown in (figures 3D and F), the expression of p-ERK1/2and p-p38 in kidney of SHR with 2.5 mg/kg enalapril or different doses of C. officinalis extracts (3, 6 and 12 g/kg) treatment significantly decreased compared to that in SHR without treatment. However, the expression of ERK1/2 and p38 was not changed after treatment. These results suggested that C. officinalis extracts inhibited the activation of ERK1/2 and p38 signaling in SHR.

Table 1: Effect of Cyathula officinalisKuan extracts on the Content of ALT, CRE, CRP and BNP

To the best of our knowledge, the present study is the first to determine the effects of C. officinalis extracts on renal vascular changes in hypertensive animals. The main results and findings of this work are as follows, firstly, C. officinalis extracts decrease blood pressure in SHR; secondly, these extracts prevented the glomerular fibrosis and sclerosis as well as renal atherosclerosis in SHR; thirdly, these extracts reduced the thickness of the vascular wall and inhibited the decreased retinal arterial diameter in SHR; fourthly, and most importantly, C. officinalis extracts inhibited the expression of ALD, renin and Ang II in both serum and kidney of SHR.

Hypertension is associated with decreased renal function and renal failure. The kidney is an important organ to regulate the balance of water and electrolyte and has a variety of endocrine functions. It is not only an important organ of blood pressure regulation, but also one of the main target organs of hypertension[22,23]. It is well known that resistance vessels become thicker or encroach into the lumen in kidneys[24], which occurs mainly in the preglomerular vessels at the prehypertensive or early stage of hypertension and that promotes hypertension by increasing renal vascular resistance and reducing both glomerular filtration and sodium excretion in SHR[25]. Hypertension increases peripheral vascular resistance by vascular remodelling, including vascular smooth muscle cell proliferation, hypertrophy, vascular compliance and narrow vessel lumen. In previous studies, it was also reported that vascular remodelling ultimately leads to target organ damage, such as myocardial hypertrophy, myocardial fibrosis and glomerular hyalinization in SHR[26]. Recent study have reported that C. officinalis extracts significantly reduced the expression of renal TGF-1 in SHR through inhibiting renal fibrosis, renin release and Ang II production, thus leading to vasodilation and a decrease in blood pressure[27]. In the present study, the protective effect of C. officinalis extracts against retinal vascular remodeling was confirmed, indicating the potential protection against end-organ damage induced by hypertension, such as renal damage.

The RAAS, one of the most important endocrine systems, is responsible for the regulation of blood pressure, fluid volume, sodium and potassium balance in cardiovascular, renal and adrenal glands[20]. It plays an important role in the occurrence and development of hypertension, leads to the development of cardiovascular and renal diseases and contributes to the drug resistance[21]. In the present study, C. officinalis extracts were found to significantly decrease the expression of ALD, renin and Ang II in both serum and kidney of SHR. The primary function of renin is to eventually cause an increase in blood pressure, leading to restoration of perfusion pressure in the kidneys. Renin inhibition is indeed associated with lowering of Ang II levels and blood pressure reduction[28]. Ang II, the most active substance of RAAS, has a strong role in vascular remodeling involving vasoconstriction and promotion of development of atherosclerosis, endothelial dysfunction, hypertension and related diseases such as metabolic syndrome, through a variety of inflammation and coagulation mechanism[29,30]. Another effector of the RAAS, ALD, plays a central role in the regulation of plasma Na+, extracellular K+ and arterial blood pressure[31].

In conclusion, this work demonstrated for the first time that C. officinalis extracts ameliorated hypertensioninduced renal vascular remodelling in the SHR model through inhibiting the expression of ALD, renin and Ang II and activation of ERK1/2 and p38 signalling pathways. It suggested that C. officinalis extracts have potential beneficial effects on the renal vascular remodelling induced by hypertension.