Effects of L-NG-Monomethyl-Arginine on Apoptosis of Articular Chondrocytes

Guodong Wang and Bin He*

At present, the Chinese population is aging. Epidemiological investigations indicate that the incidence rate of degenerative osteoarthritis (OA) is increasing annually. It is expected that, in the near future, the disease will be one of the main causes of disability among adult males in China[1,2]. The main pathological characteristics of degenerative OA include significant apoptosis of cartilage cells in joints and progressive degradation of the matrices outside articular chondrocytes[3]. The expression levels of nitric oxide (NO) and its byproducts are significantly positively correlated with the number of apoptotic cells in articular cartilage and the severity of OA. In the early stage of the disease, NO and its byproducts stimulate and induce the apoptosis of articular cartilage cells, leading to the pathological degradation of articular cartilage[4,5]. L-NG-monomethyl-arginine (L-NMMA), as a congener of L-arginine, competes with it at the binding sites of nitric oxide synthase (NOS). L-NMMA can inhibit three NOS’s with low selectivity, resulting in the irreversible inactivation of inducible nitric oxide synthase (iNOS) with extended time[6]. Thereby motivated, we herein evaluated the influence of L-NMMA on the apoptosis of articular chondrocytes in OA rabbits. Sampling of joint fluid and serum:

Arthrocentesis was performed on the right knee joint of each group. After the needle penetrated the joint cavity, 1 ml of 0.9 % normal saline solution was injected slowly through repeated infusion and withdrawal three times. Then the cavity liquid was collected and centrifuged at 1,000 r/min for 5 min, and finally the supernatant was collected and stored at -20º. Subsequently, 6 ml of blood was drawn from the ear vein and centrifuged at 3500 r/ min for 10 min, and then the upper layer serum was collected and kept in a refrigerator prior to detection.

Detection of synovial fluid and serum NO:

The nitrate reductase method was used to detect NO expression levels in synovial fluid and serum. A standard curve was plotted by the following procedure. Seven clean dry 15 ml scaled test tubes were used to prepare 0-2.0 μg of standard nitrite nitrogen solutions. After being shaken well, the solutions were incubated in a 30º incubator or thermostatic water bath for 30 min, and then measured at 540 nm. The standard curve was plotted or regression equation was established with nitrite nitrogen level (μg) as the x axis and optical density as the y axis. Three portions of synovial fluids (1 ml) were weighed and put into 3 numbered test tubes. Afterwards, 9 ml mixture of Potassium Nitrate (KNO3), isopropyl alcohol and phosphate buffer was added into each test tube, and 1.0 ml of trichloroacetic acid was immediately added into one of the three tubes and mixed as a control. Then all the tubes were connected to a vacuum pump in a vacuum dryer for air exhaust, and kept in dark at below 30º for 30 min for thermal insulation. Subsequently, 1.0 ml of trichloroacetic acid was added into the tubes and shaken well. After 2 min, 2 ml of the supernatant was collected and added into another group of test tubes, with the control tube as a reference. According to the standard curve, the enzymatic activity was calculated.

Sampling of cartilage tissues, Hematoxylin and Eosin (HE) staining and immunohistochemical assay:

Under anesthesia, the rabbits were killed by head knocking with a hard object. Immediately after their death, the right knee joint cavity was cut open to observe the lesions in articular cartilage, synovium and other parts with naked eye. Then cartilage tissues in the tibial plateau and the lower edge of femoral condyle were resected with a blade, fixed, dehydrated, transparentized, embedded into paraffin, sectioned, and subjected to Hematoxylin and Eosin (HE) staining and TUNEL assay. The lesions were graded according to the modified Mankin histologic/histochemical grading system[7,8]. Bax and Bcl-2 expressions in cartilage tissues were detected by immunohistochemical assay, Bcland quantified with high-resolution pathological image analysis system (HPIAS-1000). The percentage (%) of positive area to total one in the entire tissue was calculated under a light microscope. Five visual fields were randomly selected for each section, and the results were averaged.

In Group A, the HE staining was even without destaining. The articular cartilage surface was smooth and flat with uniformly distributed chondrocytes. In Group B, the HE staining was less even with obvious destaining. The articular cartilage surface became thinner with fractures deep in the subchondral bone. The chondrocytes were arranged disorderedly, and the tide line vanished. With increasing concentration of L-NMMA, the damage in articular cartilage tissue was significantly alleviated (fig. 2). There were significant differences in the Mankin scores between groups (F=133.873, p<0.01) (Table 1). The Mankin scores of Group B-E were significantly higher than that of Group A. Starting from Group B, the Mankin score significantly declined with increasing dose of L-NMMA (p< 0.05) (fig. 3). 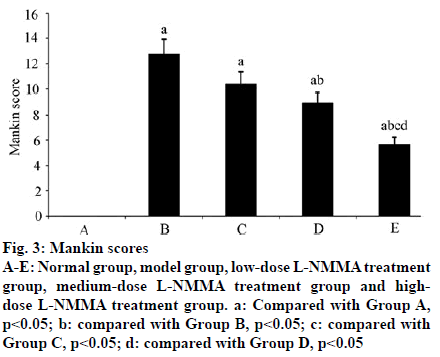 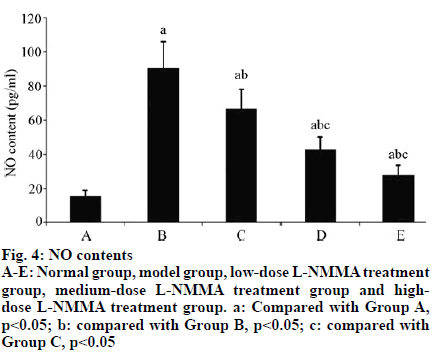 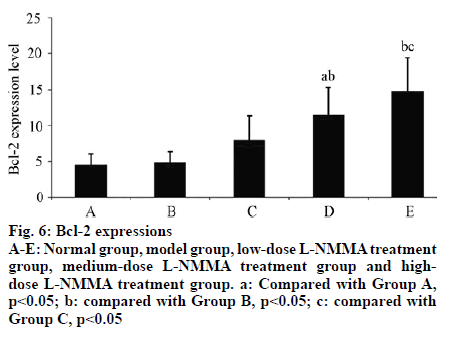 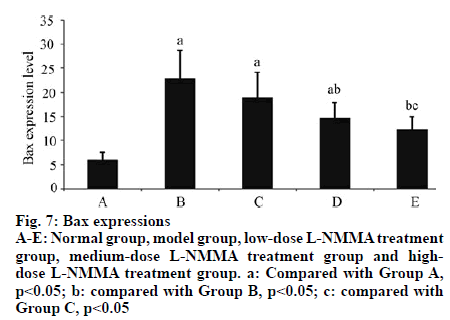 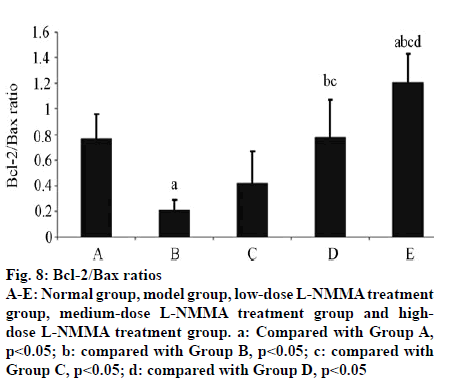 Table 5: Expressions of Bax and Bcl-2 and Bcl-2/Bax Ratios

NO, which is a small molecule widely existing in the physiological and pathophysiological media of human body, also has a simple structure in the form of free radicals. This molecule is readily soluble in lipids and can easily spread to the internal and external cellular environments through the cell membrane barrier. Therefore, it has a wide variety of biological functions, playing crucial roles in the onset and progression of OA[9,10]. NO in joint is mainly derived from the cells and chondrocytes of joint synovium. The secretion of inflammatory cytokines can significantly simulate articular chondrocytes and synovial cells, so the expression level of iNOS is gradually elevated, promoting the production of NO molecules in joints[11,12]. In addition, inflammatory cytokines and lipopolysaccharides in vivo can significantly stimulate the secretion of NO molecules in human body[13,14]. In the case of OA, the interactions between these factors gradually lead to aggravation. Accordingly, completely blocking this vicious cycle can drastically relieve damage to the articular cartilage, finally significantly alleviating OA.

NOS’s consist of neuron NOS (nNOS), iNOS and endothelial NOS (eNOS), among which iNOS is expressed in the articular chondrocytes of human, rabbit and sheep. OA pathological changes can be induced by injecting collagenase into the articular cavity of normal mice and those with iNOS gene deficiency[15], and the latter mice were less prone to these changes. NO and its byproducts may stimulate and induce the apoptosis of articular chondrocytes, thus inhibiting the synthesis and facilitating the decomposition of substances such as protein polysaccharides and collagen[16]. As the protein polysaccharide content plummets in joint, the water content of articular chondrocytes also reduces markedly, finally inducing abnormal drying of articular cartilage which gradually loses its original gloss[17,18]. The obvious decline in collagen content may significantly reduce the elasticity of articular cartilage, so it lacks the normal stress and easily wears during movement, leading to apparent fracture[19]. Afterwards, immune reactions occur, which generate more inflammatory mediators such as IL-1β and TNF-α, activate iNOS in articular chondrocytes and finally produce numerous NO substances.

Bcl-2 gene, as a proto-oncogene located in the short arm of chromosome 18 of human beings, can be found in the breakpoints of lymphoma cells. It is capable of inhibiting cell apoptosis and prolonging the survival time[20]. Bax gene, which is mainly located in the chromosome 11 of human beings, is one of the most important genes in the Bcl-2 family that promotes cell apoptosis[21,22].

In summary, L-NMMA can significantly reduce the expression levels of NO in synovial fluid and serum, and may inhibit the apoptosis of articular chondrocytes by raising Bcl-2/Bax ratio. Therefore, L-NMMA is feasibly applicable to the clinical treatment of OA.