Effects of Medicago sativa on nephropathy in diabetic rats

In this investigation, blood sugar and the kidney histopathological changes in diabetic rats were studied stereologically after being treated with the aqueous ethanol extract of Medicago sativa . Thirty two male Wistar rats were randomly divided into control, control+extract, diabetic and diabetic+extract groups (n=8). Diabetes was induced by intraperitoneal injection of 90 mg/kg of streptozotocin. Treatment with aqueous ethanol extract of Medicago sativa (550 mg/kg) was followed for 4 weeks. Then the left kidneys were excised and stereologically studied. The results revealed that blood sugar of the diabetic rats was reduced highly significant following treatment with aqueous ethanol extract of Medicago sativa . The final body weight in the diabetic, control and control+extract rats increased significantly in comparison with the first body weight but not in the diabetic+extract group. The kidney weight was the same in all groups except for the diabetic+extract rats which increased significantly compared to the control+extract ones. The total volume of kidney and the volume of cortex were the same in all groups while the volume of medulla increased significantly in the diabetic+extract groups compared to the control+extract ones. In addition the total glomerular volume increased significantly in diabetic rats compared to the control ones. In conclusion, although the consuming dose of the extract of Medicago sativa caused a noticeable reduction of blood sugar; however, it had no distinct effect on nephropathy side effects in this short term study.

Insulin-dependent diabetes mellitus (IDDM) is an autoimmune disorder in which the body produces antibodies against the β-cells in the pancreas and reduces their activity [1]. Vascular, neuropathy, retinopathy and nephropathy complications along with metabolic defects also occur [2-5]. One of the objectives of diabetes therapy is mainly to prevent nephropathy which starts with kidney hypertrophy due to an increase in protein synthesis, followed with additional structural changes such as increase in kidney weight and its volume due to tubular, interstitial tissue and glomerular hypertrophy within the next few weeks after streptozotocin-induced diabetes [4,6-9]. Nowadays, herbal remedies are widely used and investigations have shown that different species of plants with different compounds can reduce blood sugar and till now the antidiabetic effect of 340 medicinal plants has been studied from which M. sativa can be used as a kidney supporter in diabetes [10]. Being rich of vitamin E and β-carotene, M. sativa can prevent lipid peroxidation in diabetic patients and in fact large amounts of vitamins and minerals found in M. sativa [11] can prevent the formation of free radicals [12,13]. Therefore M. sativa can be effective in treating nephropathy, since a main reason of nephropathy is due to the absence of equilibrium between free radicals and antioxidant system, moreover, lupinalikaloids in M. sativa such as lupanine, spartine, multiflorine and n-methyl cytosine have hypoglycemic activity [14]. In addition, M. sativa contains saponine which stimulates insulin secretion [15]. Since until now no report has been given on the preventing effects of M. sativa extract on the kidney histopathological changes in diabetic rats as a result of nephropathy, and bearing in mind the fact that the onset of nephropathy is shortly after inducement of diabetes, this study was organized to investigate the short term preventing effects of the extract on the mean total volume of the kidney, mean volume of cortex and medulla and mean total volume of glomeruli in streptozotocin induced diabetic rats using stereological methods.

Male Wistar rats (n=32), with a body weight range of 180±25g, were kept in the animal house of Arak university while the environment temperature was maintained 22±2° with 12 h light: 12 h dark period. The animals had free access to diet during the experiment. The animals were randomly divided into four groups of control, control+extract, diabetic and diabetic+extract (number per group is 8). To induce diabetes, streptozotocin (STZ) was injected intraperitoneally (90 mg/kg) and rat with a blood sugar ≥ 200 mg/dl was considered as a diabetic rat. The blood sugar of rats was measured (by glucometer) at the beginning of experiment to confirm the normal blood sugar in the rats and also 10 days latter to check the rise in blood sugar in the diabetic rats. After the establishment of the diabetes the rats were treated with M. sativa extract. The blood sugar was also measured at the end of experiment to detect the changes of the blood sugar after 4 weeks of oral treatment with M. sativa aqueous ethanol extract prepared in laboratory using percolation technique with 85% ethanol as solvent (550 mg/kg body weight/ day).

After 4 weeks the rats were anesthetized by ether. When they were deeply anesthetized their chests were opened and they were perfused through the heart by placing a cannula into the left ventricle and making a small slash in the wall of the right atrium to permit blood and perfusate to run out. The perfusion was carried out with saline first followed with 150 ml of Bouin solution.

After perfusion, the left kidney was removed, weighed, cleaned of renal capsule and fixed in Bouin solution. Then the fixed kidneys were embedded in 7% agar and cut into 1 mm thick slices. The slices were prepared in paraffin blocks then 4 mm sections of the whole kidney profile were maid and stained using hematoxilin and eosin (H and E) method for stereological study.

Estimation of kidney volume and its components based on the mean of 12 sections per rat kidney were analyzed stereologically with a light microprojector at final magnification of 196. Images of the sections were projected on a table and a fine grid of points was superimposed on them. Point counting method using Cavalieri principle was carried out to determine the volume of medulla, cortex and the whole kidney according to the following formula,

where V stands for absolute volume, a(p) for area of point (grid), t for section thickness and M2 for square of profile magnification.

The total volume of glomeruli was obtained using the following equation

Quantitative results obtained from different groups of rats were evaluated for statistical differences by one way analysis of variance (ANOVA) and statistical significance was defined at p<0.05. Then multiple comparison test (Tukey test) was used to compare data from groups of rats. In addition, the paired sample t-test was used to compare the means of blood sugar and body weight of rats.

Table 1: Effect of M. Sativa extract on the blood sugar and body weight

There was a significant increase in the mean body weight of the control, control+extract and diabetic groups compared to the their first body weight, where in diabetic+extract rats such difference was not seen, (Table 1). The kidney wet weight was generally the same but a significant increase was appeared in diabetic+extract group in comparing to the control+extract group, (Table 2). 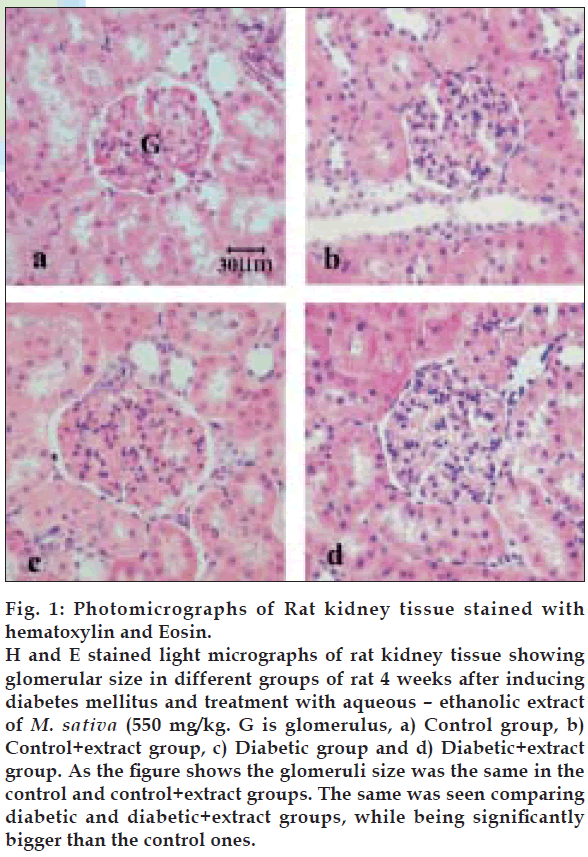 Figure 1: Photomicrographs of Rat kidney tissue stained with hematoxylin and Eosin. H and E stained light micrographs of rat kidney tissue showing glomerular size in different groups of rat 4 weeks after inducing diabetes mellitus and treatment with aqueous – ethanolic extract of M. sativa (550 mg/kg. G is glomerulus, a) Control group, b) Control+extract group, c) Diabetic group and d) Diabetic+extract group. As the figure shows the glomeruli size was the same in the control and control+extract groups. The same was seen comparing diabetic and diabetic +extract groups, while being significantly bigger than the control ones.

The results of this investigation showed that aqueous ethanol extract of M. sativa caused a highly significant reduction of blood sugar in streptozotocin diabetes. This characteristic of M. sativa is due to its important components like lupanine, spartine and multiflorine (from lupinalikaloid), N-methyl cytosine [14] and saponine (as an insulin stimulating factor) [15], which have its insulin-like effects and also increase the release of insulin [10]. According to previous studies, body weight loss occurs during diabetes in longterm [16]. This is because in diabetes mellitus the blood sugar increases and results in lack of sugar in the cells; therefore, the cells use amino acids and fatty acids as a source of energy which eventually leads to the reduction of proteins and fats in the body, this causes body weight loss, on the other hand, lack of insulin reduces rRNA and mRNA synthesis which is another factor in reduction of the body proteins [17]. In this study, as the data showed no reduction in the body weight of diabetic rats was seen which may be related to the investigation being carried out in a short period of time and therefore the effect of the extract on the body weight of the rats remained unclear. Investigations have shown that kidney weight increases through diabetes [16,18,19]. An increase in growth factors in the interstitial tissue stimulates proximal tubules and causes hypertrophy and hyperplasia in tubular cells and expansion of interstitial tissue which leads to kidney weight gain [20-22]. In the present study, the increase of the kidney weight in diabetic rats was not significant compared to the control ones and the extract used, didn’t prevent kidney weight gain in diabetic rats. Kidney enlargement mainly due to hypertrophy and hyperplasia of tubulointerstitial and slightly due to increase of glomerular volume has been reported in many cases of diabetes [21]. In this investigation a significant increase in the total volume of kidney, cortex and medulla was not found in the diabetic and diabetic+extract rats, although some studies have suggested that kidney enlargement will take place through the diabetes mellitus [23], therefore these unexpected results may be due to the short period of the study. Another feature of diabetes is glomerular enlargement due to glomerular hypertrophy and sclerosis as a result of increase in unfibrilar extra cellular matrix proteins because of an increase in glomerular filtration [22] and since there is a close relation between the function and the structure of the glomeruli, estimating the volume of glomeruli is an important factor in diagnosis of glomerular lesions [24-26].

Our data revealed a significant increase in glomerular volume in diabetic rats which confirms that diabetes can even cause glomerular enlargement in 4 weeks after inducing diabetes mellitus, this also shows that glomeruli are more sensitive to diabetes in comparing to the other parts of the kidney.

Although the data showed a highly significant reduction of blood sugar in diabetic rats following treatment with aqueous-ethanolic extract of M. sativa, it must be considered that it did not reduce to the normal level which could be due to lack of sufficient doses of M. sativa or/and the experiment being carried out in a short term. These factors can also affect the histopathological changes observed during the study. Therefore a long-term investigation is recommended for more precise observations.