Traumatic brain injury (TBI), one of the most common neurosurgical diseases in clinic[1], has such major clinical manifestations as dizziness, headache or disturbance of consciousness, which further induces various neurological dysfunction, movement disorders and even loss of self-care ability[2]. Currently, TBI is mainly caused by traffic accidents and violent incidents. It exhibits high fatality and disability rates in the later period, thus bringing a heavy burden to the patient’s family and the society. Thus, discovering reliable treatment approaches to restore the neurological function and improve the survival rate of patients has become a research priority in the field of neurosurgery. The inflammatory response of brain tissues after TBI is the most important pathological change in the later progression of disease[3]. Hinson et al.[4] revealed that the mitochondrial dysfunction of nerve cells after TBI participated in the whole pathologic evolution after brain injury. Hence, looking for drugs to control the inflammatory response and reduce or relieve the mitochondrial dysfunction of nerve cells from the current neurosurgery treatment methods has become an effective way to control the progression of TBI[5]. Recombinant human erythropoietin (rhEPO) is a drug commonly used for the treatment of renal insufficiencyinduced anemia in clinical practice. A pharmacological study proved that rhEPO can resist oxidation and apoptosis and promote nerve cell regeneration[6]. A recent study proved that rhEPO was able to protect brain tissues in TBI and had great potential in treating neurological diseases including stroke, cerebral hemorrhage and TBI[7]. In this study, therefore, rat models of TBI were established to investigate the mechanism of rhEPO in protecting neuronal cells in TBI from the perspective of effects of rhEPO on mitochondria and inflammatory responses, providing a basis for clinical experimental research in future.

A total of 60 specific-pathogen-free (SPF) grade male Sprague-Dawley (SD) rats aged 36-40 mo and weighing 280-320 g were provided by the Laboratory Animal Research Center of our hospital, adaptively fed in the animal room of our hospital at 18-25 and (56±5) % humidity for 1 w as per the administrative measures on laboratory animals of our hospital and then used in the experiments. During the experimental operations on animals in this study, the humane care for animals was performed in accordance with the 3Rs (Replacement, Reduction and Refinement) principle.

The rats were numbered and randomly assigned into sham operation group (sham group, n=15), model group (n=15) and rhEPO intervention group (treatment group, n=15). In model group and treatment group, the rat model of TBI was established by hitting the head of rats through the modified Feeney’s free-fall impact method. Specifically, the rats were anesthetized through intraperitoneal injection of pentobarbital sodium (5 %, 0.15 ml/100 g) and fixed in a prone position. Then, a longitudinal incision was made along the midline of the skull to expose the right parietal bone and a 5 mm diameter hole, 2 mm lateral to the sagittal suture, was drilled using a cranial drill. Next, a small hammer with a wounding force of 20 g was dropped from a height of 50 cm to create a brain contusion and laceration on the right side of the rat brain and the cerebral Dura mater of rats was kept intact. After that, hemostasis was done, followed by suture using a sterile surgical needle. The processing methods on laboratory animals in this study conformed to animal ethics standards. The above processing, except for hitting, was conducted on the rats in sham group. After operation, the rats in each group had varying degrees of limb twitching, poor balance and coordination of limbs, irregular breathing, mydriasis or miosis, weakened reaction of pupil to light and disappearance of eyelash reflexes, stinging reaction and corneal reflexes. Besides, oral or nasal hemorrhage or even temporary coma was observed in some rats. However, the results of behavioral observation showed that abnormal behaviors were recovered within 30 min, suggesting successful modeling. After modeling, the rats in treatment group were given intraperitoneal injection of rhEPO at a dose of 5000 IU/kg daily and those in sham group and model group were intraperitoneally injected with equal dose of normal saline. Following continuous administration for 7 d, the rats were decapitated to take their brains. Thereafter, the whole brain of rats in each group was fixed in 5 % paraformaldehyde at room temperature for 48 h. Afterwards, a 2 mm thick specimen was cut with the rat contusion as the center and a radius of 2 cm, conventionally dehydrated, sealed in liquid nitrogen and stored in a cryogenic refrigerator for testing. During the experiment, 2 rats died in sham group, 3 died in model group and 1 died in treatment group. Finally, 15 rats were included in each group for statistical analysis.

The brain tissue specimen of various rats was taken out from the cryogenic refrigerator. Then, 100 mg of specimens were weighed on an analytical balance, conventionally fixed and lysed and prepared into a single cell suspension. Next, the suspension was stained and washed according to the requirements of the Rh 123 kit, followed by observation using a US- 2018 fluorescence microscope. The green bright spots around the cell nucleus were the mitochondria taking in Rh 123. Thereafter, the green fluorescence intensity in the image was statistically analyzed using ImageJ 1.41.

After taking out the brain tissue specimen of various rats from the cryogenic refrigerator, 100 mg was weighed on the analytical balance and prepared into ultra-thin tissue sections as follows: The specimen was fixed with 30 % polyformaldehyde and 0.05 % osmic acid for 1 h. It was dehydrated under aseptic condition for 5 min. It was placed in pre-cooled ethanol at 4° for 3 min. It was soaked in epoxy resin 812 for 5 min and then embedded in paraffin. Following double staining with uranyl acetate and lead citrate, the specimen was sectioned into 50 nm slices. Thereafter, the slices are completely dried, loaded on a copper net and observed using the transmission electron microscope. Next, Simple-PCI 8.0 was employed for analysis and the specific surface area, volume density, number density and specific membrane area of mitochondria in rat brain tissue cells were detected.

Determination of IL-1β, IL-6 and TNF-α expression in tissue specimens by immunohistochemistry:

A total of 100 mg of brain tissue specimens taken out from the cryogenic refrigerator were weighed on the analytical balance. Then, according to the requirements of the immunohistochemistry kit, the specimen was subjected to fixation, embedding, sectioning, antigen retrieval, sealing and washing, incubated with primary antibodies and secondary antibodies, subjected to color development, counterstained, dehydrated and mounted, followed by observation under the microscope. The proportions of IL-1β, IL-6 and TNF-α positive cells were systematically analyzed through MetaMorph image software.

Measurement of expression levels of Drp-1, Fis-1, Mfn2 and Opa1 by Western blotting:

The brain tissue specimen of various rats was taken out from the cryogenic refrigerator. Then, 100 mg of specimens were weighed on the analytical balance. Next, total proteins were routinely extracted, of which the concentration was determined. Thereafter, 50 μg of proteins were taken, loaded, subjected to gel electrophoresis and transferred to a membrane. Afterwards, the membrane was sealed and incubated with diluted primary antibodies (1:1000) respectively at 4° overnight. The next day, the membrane was added with an appropriate amount of secondary antibodies (1:5000) and washed, followed by color development, photographing and grayscale scanning. Finally, the gray value of bands was analyzed using the ImageJ software and the relative expression was calculated with Glyceraldehyde 3-phosphate dehydrogenase (GAPDH) as the internal reference protein.

The experimental data were statistically analyzed using SPSS 19.0 software. Normally distributed measurement data were expressed as mean±standard deviation (x̄±s) and compared among groups through one-way analysis of variance and between groups by the independent t-test, p<0.05 suggested that difference was statistically significant. 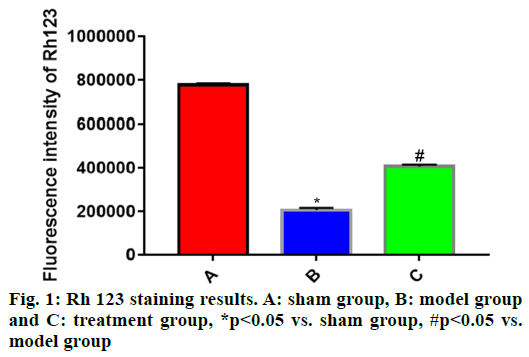 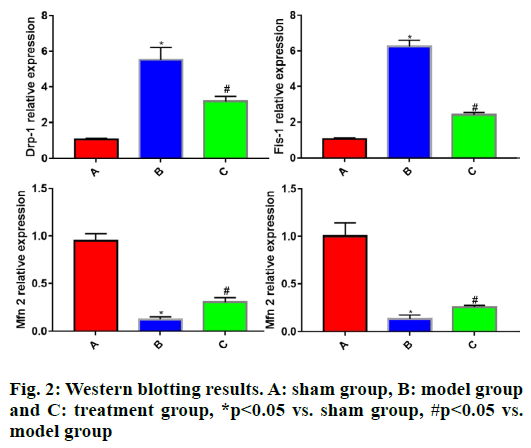 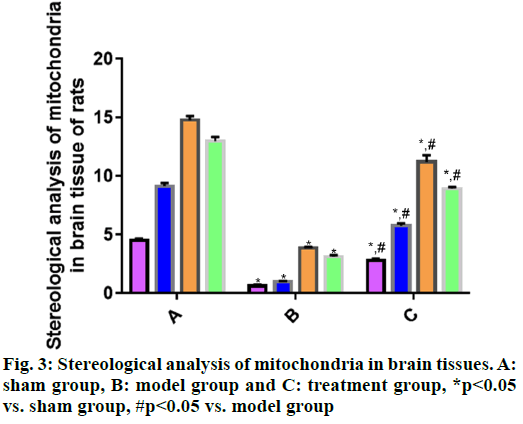 The expressions of IL-1β, IL-6 and TNF-α in brain tissues in each group of rats (fig. 4, fig. 5 and fig. 6) showed that the proportions of IL-1β, IL-6 and TNF-α positive cells in brain tissues were significantly larger in model group than those in sham group (p<0.05), while they were significantly smaller in treatment group that those in model group (p<0.05). 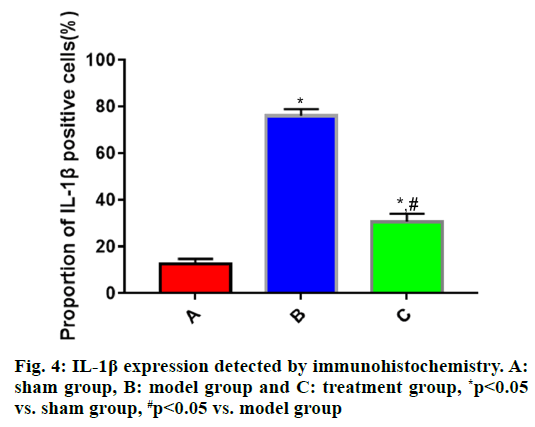 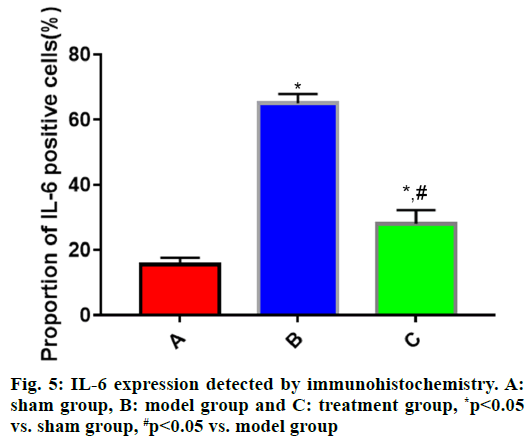 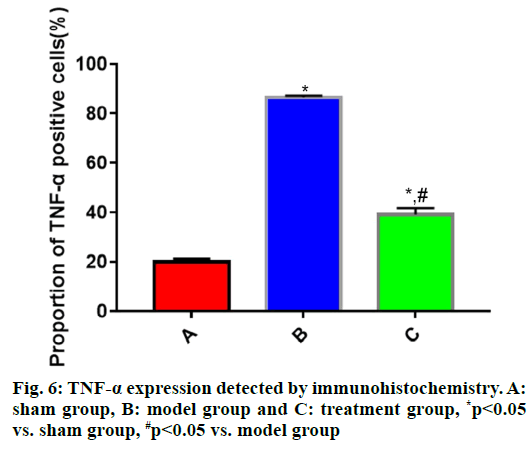 TBI, an acute neurological disease seriously endangering human health, causes a series of complications that severely affect the radical cure of TBI[10]. It is reported in a study that the impaired cranial nerve function after TBI is mainly induced by inflammatory response, mitochondrial injury and excitatory amino acid neurotoxicity[11]. Therefore, the key in improving the treatment and prognosis of TBI patients is discovering a drug or treatment approach able to effectively control the inflammatory response or mitigate mitochondrial dysfunction.

RhEPO, a glycoprotein modulating erythropoiesis in vivo, has been proven in many animal model experiments[12] to be able to resist oxidation, inflammation and excitatory toxicity, relieve brain edemas, promote angiogenesis and protect the bloodbrain barrier. With the progress of clinical research, the neuroprotection of rhEPO in TBI and ischemic stroke has excited concern. It has been confirmed that rhEPO can suppress inflammatory responses and neuronal apoptosis after acute brain injury and facilitate angiogenesis[13]. However, the role of rhEPO in mitochondrial dysfunction after TBI is rarely reported.

In conclusion, rhEPO can protect the brain after TBI by relieving the inflammatory response and mitochondrial injury after TBI. However, further exploration should be carried out on how to apply the protective effect of rhEPO to clinical targeted treatment of cerebrovascular diseases after TBI.

Kai Xue and Zheng Jin contributed equally to this study.

This study was financially supported by Tianjin health and Health Committee Science and Technology Project (No. QN20009).