Efficiency Evaluation and Usages of Thunbergia alata, Thunbergia erecta and their Combination

Plants of the genus Thunbergia are well known in several species for medicine and ornamentation, but not for foods such as T. laurifolia, T. grandiflora, T. alata, T. erecta, T. coccinea, T. colpifera and T. fragrans. Of all of them, T. laurifolia was the first widely consumed both in traditionally and locally prepared forms for human living and the second species used was T. grandifola. Many ethnobotanical reviews and scientific publications have pointed to the indications, phytochemicals and treatments of these two species. Various compounds isolated from the leaves of T. laurifolia include iridoid glycoside, grandifloric acid, glucopyranosides and derivatives of apigenin, delphinidin and phenolic acids: chlorogenic, caffeic, gallic and protocatechuic. These substances give the plant various effects as follows: biological effects and applications as an antidote for poisons and drugs and in treating drug addiction. The plant has also been reported to have antioxidant, antidiabetic, anti-inflammatory, antipyretic, antimicrobial and hepatoprotective properties[1,2]. Additionally, T. laurifolia has reduced heavy metal on lead-induced acetylcholinesterase dysfunction and cognitive impairment in mice[3], reduced signs of toxicity and reduced organ damage caused by cadmium[4]. Toxicity has also been reported. Chivapat et al.[5] studied chronic toxicity of T. laurifolia in rats for 6 mo, which did not produce any histological alterations of visceral organs in any rat group. Another one of the species mentioned, T. grandiflora was shown to have activity and vital phytochemicals, including phenols and flavonoids. Its leaves had potential antioxidative and anticholinesterase inhibitory effects, which may be effective in treating Alzheimer’s disease[6]. In addition, T. grandiflora leaves had marked hypoglycemic and antioxidant activity and hepatoprotective effects in liver-damaged rats[7]. There are few scientific studies on T. alata and T. erecta. Methanol extracts of T. alata play an important inhibitory role in the modulation of severe inflammation[8]. Three phenolic compounds, caffeoylmalic, feruloylmalic and p-coumaroylmalic acids, were found in the leaves of T. alata; their concentrations were different during wounding and salicylic acid treatment and were elicited by salicylic acid[9]. The flower of T. erecta L. can be used as an alternative to commercial indicators and is more environmentally friendly[10]. T. erecta, including leaves, stems, roots and flowers, could be exploited for the green synthesis of zinc oxide nanoparticles, which can be used in the development of pharmaceutical products beneficial to mankind[11]. Bhuiyan et al.[12] researched T. erecta, a medicinal plant with many reported phytochemicals and significant medicinal value and revealed that the methanol leaf extract has hypoglycemic effects in an animal model. The most recent research reported experimental results in swiss albino mice with T. erecta, which contained phytoconstituents, flavonoids, glycosides, tannins saponin, carbohydrates and alkaloids and possessed sedative and anxiolytic activity traditionally used in insomnia, depression and anxiety management[13]. Information on the two well- known, representative species of Thunbergia mentioned above, T. laurifolia and T. grandiflora, is very important for natural methods for human health, which is a long- lived concept. There are more interesting species in the Thunbergia genus that should be focused on for their benefits to human health as a natural way to decrease public health costs and disease suffering.

This research aimed to evaluate the biological efficacy, usage and limitations of T. alata and T. erecta following phytochemicals, toxicity and biological activity testing. Additionally, the combined extract of the two species was tested to confirm the enhanced efficacy in poisoned peripheral blood mononuclear cells (PBMCs).

Dried powder of the sample was macerated in hexane or ethanol, 20 g to 100 ml, for 72 h and then filtered. The filtrates were analyzed by an Agilent Technologies GC 6890 N/5973. The relative percentage of the constituents was expressed and determined.

Solvents were evaporated from the filtrates by rotary evaporation, then the dried filtrates were redissolved in dimethyl sulfoxide (DMSO) and maintained as stock extracts at -20°.

The stock extracts were serial 10-fold diluted with water, for five levels as working concentrations. The prepared cells were seeded in 96-well plates, 125 μl per well, 12.5 μl of the extract working concentrations were added to each well, the untreated cells and the cells treated with UV light for 20 min were used as negative and positive controls, respectively. The plates were incubated for 4 h at 37° with 5 % CO2. The medium was removed and then 10 μl of 0.5 mg/ml MTT (Sigma, USA) was added to each well, the plates were incubated for 4 h at 37°, in the dark. DMSO was added to each well to solubilize formazan crystals for 4 h in the dark; finally, the absorbance was read at 570 nm. If the Half-maximal inhibitory concentration (IC50) values were observed, they will be used to estimate LD50 values following World Health Organization (WHO)[15] guideline.

The cells were treated with the extract concentration at IC50 value or at a maximum-treated concentration, in case no IC50 value was detected. After the treatment, the cells are applied on a gel-coated slide and subjected to electrophoresis and then the images were recorded. The comets in the images were observed; at least 150 cells (50 cells for each of triplicate slides) were examined for each experiment. Level of Deoxyribonucleic acid (DNA) damage was defined using the Olive Tail Moment (OTM), which is the relative amount of DNA in the tail of the comet multiplied by the median migration distance using the CASP software (Wroclaw, Poland). The nonparametric Mann-Whitney test was used for statistical analysis of the comet assay results, at p<0.05.

The combined extract was prepared by mixing the leaf powders of T. alata and T. erecta at a ratio of 1:1. Each of the 1 mg combinations was added to 9 ml of DMSO, stirred and kept at -20° for 2 d. The upper part, clear solution defined as combination extract was used to test their biological activity on poisoned PBMCs by MTT and comet assays.

The poisoned PBMCs with five working concentrations of rice whisky and bathroom cleaner, 40–0.004 % and 10 %–0.001 % were subsequently treated with the combination extract and then MTT and comet assays were performed. The control cells were the poisoned PBMCs without plant extract treatment. Biological activity was detected by comparing cell viability percentages and OTM values between the control cells and the treatments.

*Vitamin E refers to a class of compounds; n/a: not analyzed as individual compound by the Wiley 7N.1 library, **H=Hexane, Et=Ethanol 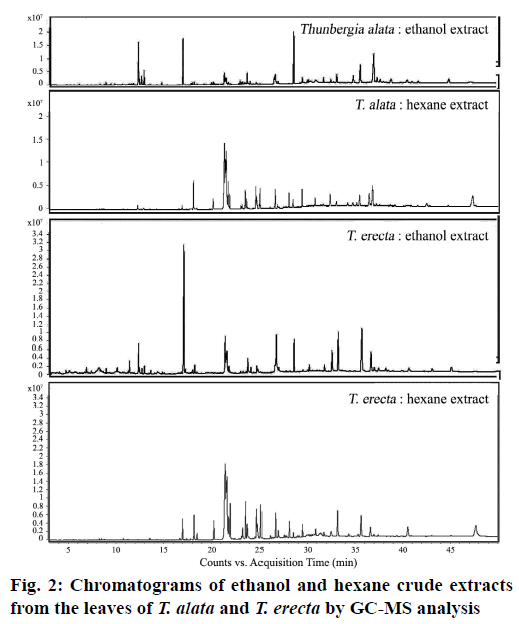 Figure 2: Chromatograms of ethanol and hexane crude extracts from the leaves of T. alata and T. erecta by GC-MS analysis Because the extracts did not show IC50 values, the concentration of the first extract dilution was used as working the concentration (Table 3) and selected for further genotoxicity study via the comet assay. The results showed that the extracts of both sample species induced significant DNA damage in PBMCs (p<0.05) compared to the negative control. The level of DNA damage exhibited OTM in PBMCs (Table 3, fig. 4).

Table 3: The Level of DNA Damage Expressed as Olive Tail Moment (OTM) In PBMCS after Treatment with Ethanol and Hexane Extracts of T. alata and T. erecta Leaves Testing in both the normal and poisoned human PBMCs is in preclinical trials with animal cell and tissue culture following Doke and Dhawale[16] and the Physicians Committee for Responsible Medicine[17]. The methods selected here are reliable for in vitro and human cell and tissue, PBMCs cultures for cytotoxicity and genotoxicity with MTT and comet assays for toxicity and biological activity testing.

The two studied species and the combination showed no toxicity at the cellular level, but they induced significant DNA damage at the concentrations tested, 0.05 and 0.07 mg/ml. It means that genetic materials of the cells were destructed, can lead mutation. These two extract concentration levels may be carcinogen[18]. So, the hazardous level must be found for consumption caution of these two plants, the tested concentrations which induced significant DNA damage, 0.05 and 0.07 mg/ml were used for LD50 calculation for consumption limitation. The LD50 values were 452.915 and 513.306 mg for the extracts of T. alata and T. erecta, respectively per 1 kg rat, which are classified in the WHO[15] class II, moderately hazardous when taken orally by rat at 50–2000 mg/kg body weight. When passed through humans at approximately 50 kg of body weight, the plants can be taken up to 2500–1 00 000 mg (2.5–100 g) to reach a moderate hazard according to the WHO[15] referring that doses of T. alata and T. erecta extracts under 2.5–100 g, should be saved for consumers. Concerning these data, usages of T. erecta reported[11-13,19] in cooking, eating as a vegetable and application of its leaves for a remedy of headache, should be carefully determined for the doses. However, it is not surprise that T. alata leaf extracts can have activity against Pseudomonas aeruginosa and have significant antibacterial activity against Salmonella typhi[20], according to their biological activities including DNA damage in normal and poisoned PBMCs, which can be assumed to occur at plant concentrations.

At careful extracts doses, the presence of phytochemicals needs to be further considered for bioactivity assessments for further use in humans. The high quantity of oleamide and phytol were probable major or worked together having synergetic activity; phytol made up 12.36 % and 24.90 % in T. alata and T. erecta, while oleamide made up 46.29 % and 43.47 % in T. alata and T. erecta, respectively. Therefore, the extracts should have activities against scopolamine- induced memory loss, increase the production of the hormone acetylcholine, increasing memory function and act as a chemopreventive agent against Alzheimer’s disease, inducing deep sleep and upregulating appetite[21,22]. Additionally, the presence of phytol can be assumed as a property of plants. Phytol is derived from chlorophyll metabolism and released when plants are digested in the intestines. It is indispensable in the human body as it has important functions, including regulating blood glucose by activating enzymes that have a positive effect on the production of insulin and it may restore the metabolic functions of patients with type 2 diabetes, reducing cholesterol levels in blood, ultimately reducing blood pressure levels[23]. Moreover, phytol leads to the biosynthesis of tocopherols, a type of vitamin E[24] which is useful for cell health and can help decrease cell aging[25]. Therefore, the two studied plants, which can be assumed to be beneficial in human health, should be focused on the correct doses. Another minor substance may potentially work together with the major phytochemicals based on experiments at the preclinical trial level here.

As some synthetic drugs display several limitations, including side effects and costs, medicinal plants and their phytochemical compounds have been considered and used for many disease treatments in fresh, dried, and prepared forms, including T. alata and T. erecta. However, the dose limitations have been focused on.

This research is financially supported by Research and Academic Services, Khon Kaen University.

Authors have no conflict of interest.