Free radicals are produced as by-products or endproducts of biochemical pathway in our human system. These free radicals can damage macromolecules like DNA, proteins and lipids leading to inflammation, which is the key process involved in pathogenesis of almost all diseases like heart disease, cancer, diabetes, skin diseases, Alzheimer’s disease, kidney and liver disorders, etc[4,5,6].

The inflammatory damage is due to the release of ROS from activated neutrophils and macrophages. This further stimulates the release of inflammatory cytokines like tumor necrosis factor-α, interleukin-1 and interleukin-α, which recruits additional neutrophils and macrophages thereby enhancing the rate of inflammation. Free radicals are the key mediators in inflammatory mechanism and free radical scavengers or antioxidants have neutralisation effect, which attenuates inflammation[7,8].

The secondary metabolites in the plants have antioxidant property and they can neutralize the free radicals and prevents the macromolecular damage in biological system. The Plants are screened for their antiinflammatory activity, thereby can be used as medicine for treatment of diseases.

Mimusops elengi L. leaves have potent antiinflammatory property, because of the rich source of antioxidants[9]. Due to the presence of vital secondary metabolites like alkaloids and flavanoids, the leaf infusion of Kedrostis foetidissima (Jacq.) Cogn. is used in curing asthma, skin diseases and snake bite[10]. The leaves of Artemisia vulgaris L. was found to have potent free radical scavenging activity[11]. Also, this plant showed antitumor, antibacterial, antirheumatic, antiseptic and hepatoprotective activities[12,13].

For preparation of polyherbal formulation, Mimusops elengi L., Kedrostis foetidissima (Jacq.) Cogn. and Artemisia vulgaris L. were used in ratio 1:1:1, followed by soxhlet extraction using 80% ethanol. Polyherbal extract was evaporated using rotavaporator until no solvent remained. The resultant sample was stored in refrigerator for future studies after dissolving in DMSO[3].

The safety level of MKA for anti-inflammatory activity was assessed by MTT assay. The 50μl of MTT was added to 100μl of treated cells and incubated at 37°C for 3 hours. Then, 200μl of PBS was added and excess MTT was removed by aspiration. The formazan crystals formed were solubilised using 200μl of acid-propanol by overnight incubation in dark. The absorbance was read at 650nm in microtitre plate reader. The percentage cell viability was calculated using the formula [(control OD-sample OD)/control OD] x 100[15].

The inflammatory macrophage cell model was created by Khan et al. (1995) modified method[16]. RAW 264.7 cells were seeded in 6-well plate at a concentration of 5x103 cells per well and incubated at 37°C in 5%CO2 for 24 hours. Cells were washed with DMEM and supplemented with 1600μl of growth medium. Cells were treated with 200μl of four different concentrations of MKA (25, 50, 75 and 100μg/ml) for 1-2 hours before LPS treatment. 25μM Quercetin was used as standard and cell treatment was done similar to MKA. Then, it was treated with LPS (1μg/ml) and incubated at 37°C in 5% CO2 for 24 hours. Cell control was maintained without LPS and MKA. Also, positive LPS without MKA treatment was also studied. The mixture was then centrifuged at 2000xg for 10 minutes and pelleted cells were used to study cell morphology by Inverted phase contrast microscope and Reactive Oxygen Species(ROS) by DCF-DA Flow cytometry. The Supernatant was used to study Nitrite release by Griess assay[17].

Effect of MKA on cell morphology

Morphological changes were studied in Inverted phase contrast microscopy in 200X magnification. Cell morphology was studied for all cell treatments including control and positive LPS.

Nitrite is an oxidative end product of Nitric oxide. Nitrite concentration was analysed by Griess assay. 100μl of cell supernatant was incubated with equal volume of Griess reagent and incubated for 10 minutes at room temperature. The absorbance value was measured at 550nm using microplate reader. Sodium nitrite standard curve was used to calculate nitrite levels[14].

Oxidative damage in intact cells can be assessed using the cell permeable stain 2’, 7’-dichlorofluorescein diacetate (DCF-DA). This molecule DCF-DA can be converted to fluorescent substance 2’, 7’-dichlorofluorescein (DCF) upon oxidation. Measure of this fluorescent substance is an indicator of ROS level in the cell. RAW 264.7 cells were seeded into culture dishes with glass coverslips. Following various pre-treatments, cells were washed using PBS. This is followed by addition of 20μM DCFDA and the cells were incubated for 30 minutes at 37°C in the dark condition. After washing the cells with cold PBS, the DCF fluorescence was analysed in FACS Verse flow cytometer (BD Biosciences) at excitation wavelength of 488nm and emission wavelength of 535nm[18].

All experiments were performed in triplicates and the results were expressed as Mean±Standard Deviations (SD). Data were analyzed using one way ANOVA followed by post hoc Dunnett’s multiple comparision test using SPSS software (Version 21). P<0.01 were considered as statistically significant.

The cell viability of RAW 264.7 Macrophage cells was studied after treatment with different concentrations of Polyherbal formulation (MKA) ranging from 2.5-500 μg/ml by MTT assay. The cell viability was calculated as % of control. 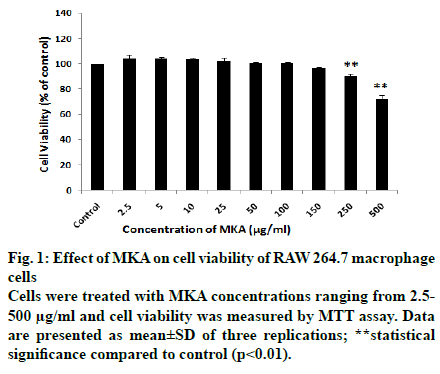 Fig. 1: Effect of MKA on cell viability of RAW 264.7 macrophage cells
Cells were treated with MKA concentrations ranging from 2.5- 500 μg/ml and cell viability was measured by MTT assay. Data are presented as mean±SD of three replications; **statistical significance compared to control (p<0.01).

Concentrations 2.5, 5, 10, 25, 50, 100 μg/ml were chosen for anti-inflammatory studies as almost 100% cell viability was seen. Similar studies were performed in RAW 264.7 macrophage cells by various researchers to identify the cytotoxiciy and assess the safety level of their drug[ 19,20,21].

Anti-inflammatory potential of MKA was analysed in LPS stimulated macrophages by nitrite assay. Nitrite level is an indicator of extent of inflammation in the cell. Any anti-inflammatory drug has a tendency to reduce the nitrite production, signifying its pharmacopotential nature. Nitrite concentrations in treated cells were determined using standard sodium nitrite curve (Fig. 2). 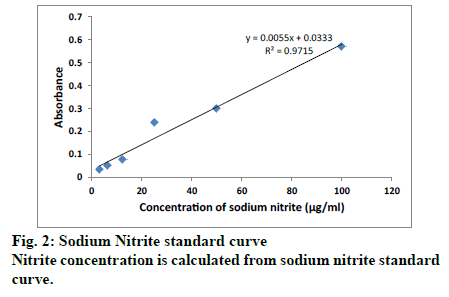 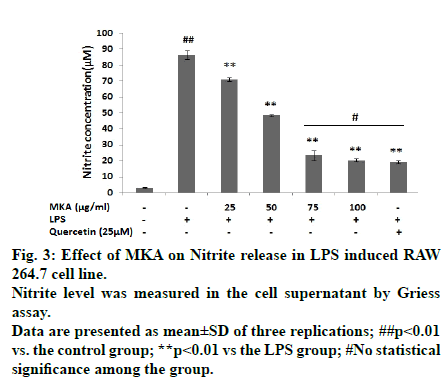 Fig. 3: Effect of MKA on Nitrite release in LPS induced RAW 264.7 cell line.
Nitrite level was measured in the cell supernatant by Griess assay.
Data are presented as mean±SD of three replications; ##p<0.01 vs. the control group; **p<0.01 vs the LPS group; #No statistical significance among the group. Intracellular ROS is a measure of extent of inflammation in the cells. LPS treatment induced inflammation in macrophages which resulted in the increase of ROS level. Prior treatment of macrophage cells with MKA reduced the production of ROS (Fig. 5). DCF fluorescence increased in LPS treated cells with increased ROS production. In Fig. 5, M1 represents the percentage of normal cells and M2 represents the percentage of cells that increase in ROS production. It was evident that MKA treatment shifted the DCF fluorescence histogram from M2 towards M1. This shift is an indicator of reduction in ROS production by MKA. 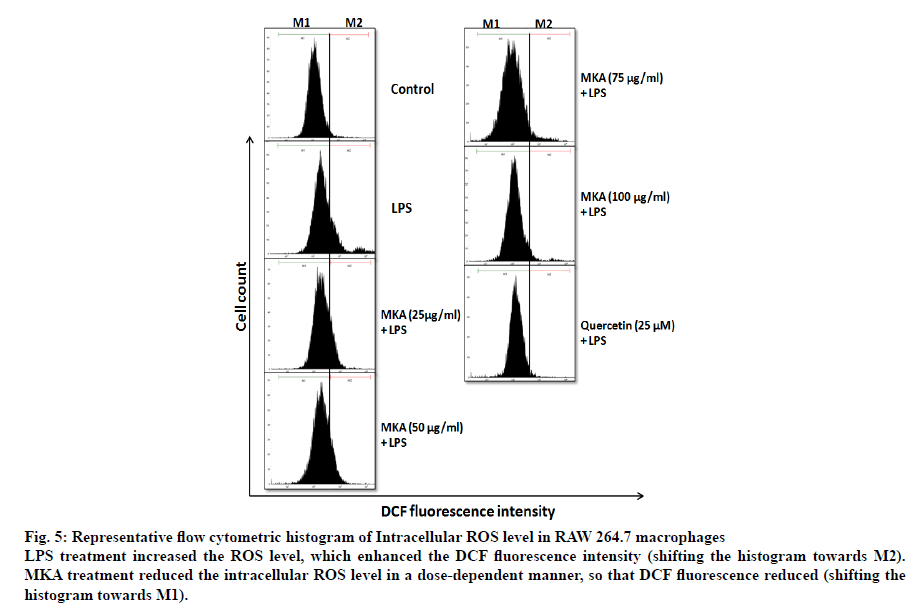 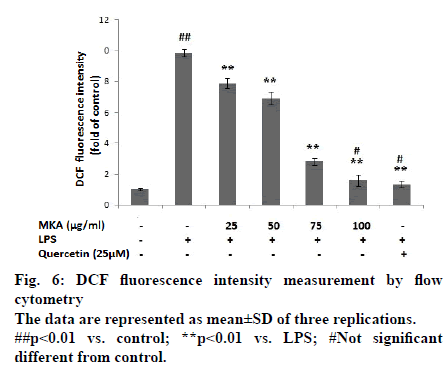 Fig. 6: DCF fluorescence intensity measurement by flow cytometry
The data are represented as mean±SD of three replications.
##p<0.01 vs. control; **p<0.01 vs. LPS; #Not significant different from control.

The present experiment demonstrated for the first time that MKA comprising of Mimusops elengi L., Kedrostis foetidissima (Jacq.) Cogn. And Artemisia vulgaris L. were proven to have anti-inflammatory property in LPS induced RAW 264.7 macrophages, by inhibiting the production of intracellular Reactive oxygen species (ROS). The polyherbal formulation (MKA) was also proven to restore the normal cell morphology by protecting the cells from LPS induced cell membrane damage. Nitrite, the key inflammatory mediator, was also significantly reduced by MKA in LPS induced macrophage cells. It is evident from the current research that MKA has potent anti-inflammatory effect in LPS induced RAW 264.7 macrophages.

The authors would like to thank the faculty of Department of Biochemistry, Biotechnology and Bioinformatics, Avinashilingam University for providing the instrumental facilities to complete the present research study.