Enhancement of skin permeation of ibuprofen from ointments and gels by sesame oil, sunflower oil and oleic acid

Several batches of paraffin ointments were prepared and ibuprofen was incorporated into them. Sesame oil, sunflower oil, and oleic acid in different concentrations were incorporated into different batches. Commercial ibuprofen gel was obtained and divided into several batches and different concentrations of sesame oil, sunflower oil, and oleic acid were incorporated into them. The in vitro drug release characteristics through hairless (88 mm) rat skin was carried out by using modified Insertion cell designed in our laboratory. The cell was placed into a borosil beaker containing 50 ml of pH 7.4 phosphate buffer as the diffusion fluid. The beaker was placed over the magnetic stirrer, which was maintained at 37±0.5° to maintain the temperature of diffusion fluid. The released drug content at predetermined time interval was measured using U-V-double beam spectrophotometer at 272 nm. The drug release was raised with increase in oil concentration.

Permeation enhancement of a drug is presently an important area of pharmaceutical and toxicological research. The low skin permeability of most drugs necessitates the use of permeation enhancers. The skin permeability for lipophilic molecules has been shown to be markedly increased by surfactants [1]. The influence of temperature on the percutaneous absorption for lipophilic and hydrophilic drugs across rat skin pretreated with oleic acid [2] has been studied. The permeation rate of flurbiprofen was increased 5.8-17.5 times with the addition of saturated fatty acids [3]. The role of cardamom oil as a skin permeation enhancer has been studied for indomethacin, piroxicam, and diclofenac by using buffer solution in diffusion cell, and it has been concluded that for these drugs, a higher solubility was achieved at pH 7.4 [4]. Several materials have been studied for permeation enhancement [5-9], which include dimethylsulfoxide, dimethylformamide, dimethylacetamide, urea, propylene glycol, cardamom oil, soyabean oil, oleic acid, and unsaturated fatty acids. The release of acyclovir from semisolid dosage forms by using insertion cell [10] showed that the rank order of release was identical to that of Franz cell with an advantage of ‘easy to use,’ while it does not suffer the problems of air removal at the membrane and liquid interface. The oxidative stability of botanical emollients was found to be more in high oleic (85% oleic acid) hybrid sunflower oil [11]. Since there are several problems associated with permeation enhancers like DMSO and DMF, which cause reversible denaturation of keratin and lead to keratolysis, the skin may take a few days to recover during which it may be prone to be invasive. The use of ionic surfactants is limited by their irritation potential. Azone promotes the absorption of polar solutes but does not appear to be effective on human skin. Hence, there is a quest for permeation enhancers of proven safety. The present study is aimed at finding permeation enhancement activity by using vegetable oils like sesame oil, sunflower oil, and oleic acid. The fixed oils are thick viscous liquid; they cause occlusion of the skin and are likely to increase permeation of drugs. Since these are food materials, toxicity is of less concern. They can be metabolized in the body and are cheap and easily available.

The insertion cell was constructed in our laboratory based on the design of Chattaraj et al [10]. Each cell consists of three basic components in an unassembled form. The upper section consists of an oblong block of plexiglas (1.5 mm thickness); a small circle of 10 mm was cut out of the block. The middle section (3 mm thickness) consists of a matching oblong block of plexiglas into which a similar circle of 10 mm was cut out, which acted as sample holder. The lower component was a solid block of plexiglas (1.5 mm thickness) of compatible dimension; all the three sections were screwed together with the aid of two bolts on either side of the three components. The membrane was placed between the upper and sample holder sections prior to assembly. A stainless steel spring support was designed to act as a holder for the insertion cell and positioned at a distance of 10 mm from the bottom of the flask.

Paraffin ointment was prepared by melting white bees wax 2%, hard paraffin 3%, cetostearyl alcohol 5%, and white soft paraffin 90% in a water bath at 70º and triturated in a mortar and pestle to get a semisolid mass at room temperature. Ibuprofen (2% w/v) was incorporated into the base. The fundamental principles of mixing in equal quantities were followed for uniform incorporation of drug in the base. The ointment containing 2% w/w of ibuprofen was divided into several batches and numbered. Different concentrations like 10%, 20%, 30% of sunflower oil and sesame oil were incorporated into the bases with proper triturating until uniform distribution took place. Similarly oleic acid in the concentration of 5 and 10% was also incorporated into another two batches of the base and kept for permeation studies.

Incorporation of oils into the gel

A 10% w/w of ibuprofen commercial gel (Ribufen® gel, Biostar Pharmaceuticals Ltd., Pune) was purchased and divided into several batches and named. To these batches, different concentrations like 10, 20, 30% of sunflower oil and sesame oil were incorporated with proper trituration until uniform distribution took place. Similarly, oleic acid in the concentration of 5 and 10% was also incorporated into another two batches of the gel and kept for permeation studies.

Prior to assembling the insertion cell, each semisolid preparation was accurately weighed (200 mg) and placed into the sample holder, which was positioned into the lower block. The hairless (88 μm) rat skin was placed on top of the sample holder and all three sections were firmly bolted together. The insertion cell was fitted into the holder spring in reverse way and placed into a 100 ml Borosil® beaker containing 50 ml of pH 7.4 phosphate buffer as the diffusion fluid, and the beaker was maintained at 37±0.5° to maintain the temperature of diffusion fluid. Samples were drawn at predetermined time intervals. Released drug contents were measured using UV-double beam spectrophotometer at 272 nm. in phosphate buffer The drug release experiments were conducted in triplicate and values were compared using students t-test (α significance level). 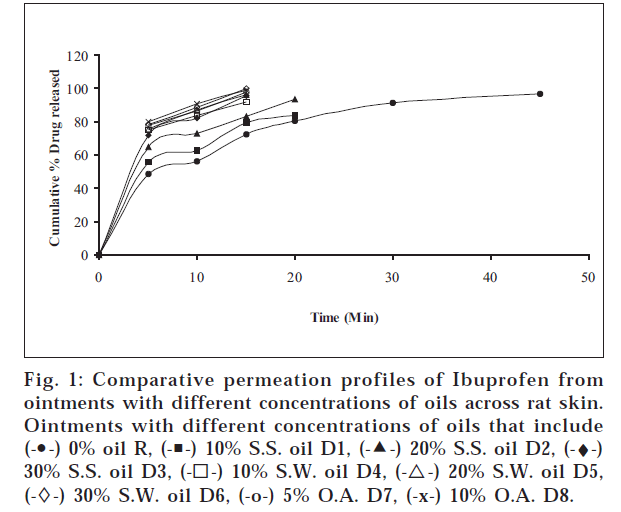 Fig 1: Comparative permeation profiles of Ibuprofen from ointments with different concentrations of oils across rat skin. 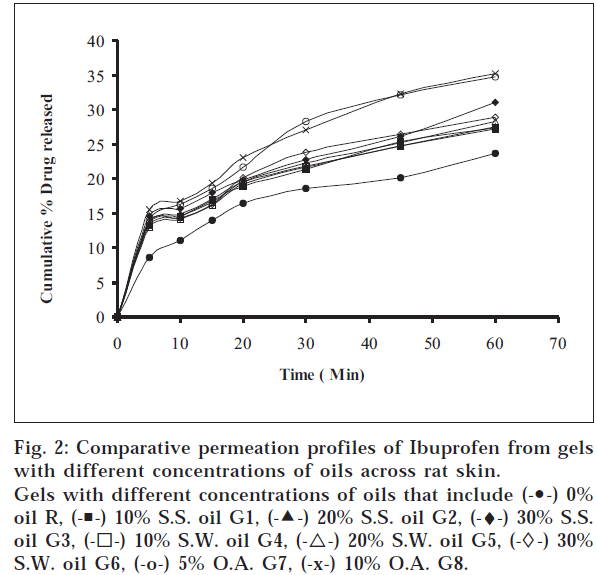 Fig 2: Comparative permeation profiles of Ibuprofen from gels with different concentrations of oils across rat skin. 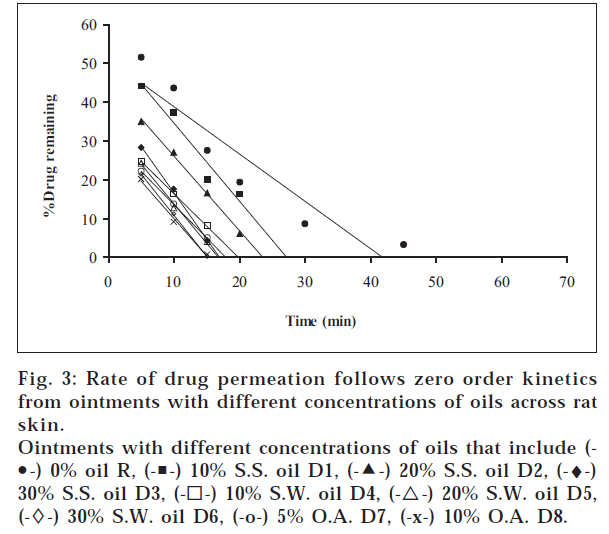 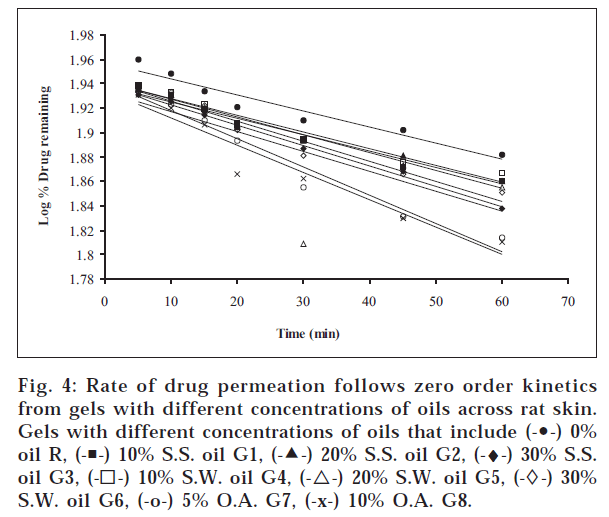 The primary role of the skin is to act as a barrier for drug absorption. There is ample proof that the stratum corneum is the primary barrier to drug absorption through skin [12]. It has been suggested in a study on the effect of temperature on the penetration of alcohol [13], that there are at least two pathways for transport across skin: a polar pathway and a non-polar pathway. The polar pathway is associated with the protein component of stratum corneum, and the non-polar pathway is associated with the lipid component. The more occlusive the vehicle, the greater is the hydration and hence the permeability [14]. Sunflower oil, sesame oil, and oleic acid, being thick viscous liquids, might be increasing the occlusive nature of the paraffin ointments and gels, which may be one of the reasons for permeation enhancement. Sesame oil – having an average of protein (25%) and globulin (67.3%), which is the predominant fraction – might be causing an enhancement by polar pathway, i.e., by widening the aqueous channels. Unsaturated fatty acid molecules, because of their kinked or twisted shape and structure, are supposed to insert themselves into the lipid matrices of the skin, widen the non-aqueous channels, and increase the permeation. Sunflower oil contains oleic acid (23%) and linoleic acid (66%). Its iodine number is 127, which indicates good unsaturation, and hence it causes good permeation enhancement by non-polar pathway. Oleic acid is a mono-unsaturated fatty acid, which enhances permeation by the non-polar pathway. Sesame oil has about 43% each of linoleic acid and oleic acid and has an iodine number of 108; therefore, it may be causing enhancement by polar as well as by non-polar pathway. It was observed that the rate of drug release increased with rise in percentage oil incorporated for sesame oil, sunflower oil, and oleic acid. Release from ointments and gels containing oleic acid was faster than those containing the same percentage of sunflower oil, which in turn was faster than those containing same percentage of sesame oil. The maximum enhancement effect was observed at 10% for both the oils and 5% for oleic acid.

The authors are grateful to the Department of Pharmaceutical Sciences, Andhra University; and the authorities of the Jeypore College of Pharmacy for giving facility to conduct the experiment. Thanks are also due to Prof. K.P.R. Chowdary and Mr. A. Kondaiah for their invaluable help and suggestions during the work.