Poorly water-soluble drugs often require higher dosage in order to reach the therapeutic plasma concentrations after oral administration. Improvement in the extent and rate of dissolution is highly desirable for such compounds, as this can lead to an increased and more reproducible oral bioavailability and subsequently to clinically relevant dose reduction and more reliable therapy [1]. A solid dispersion approach could increase the dissolution rate of poorly water-soluble drugs thereby improve their bioavailability [2,3]. Usually, solid dispersions are two-component systems in which the drug is incorporated in the hydrophilic carrier. The drug within the hydrophilic carrier may be dispersed molecularly or occur as amorphous components [4].

Candesartan cilexetil (Figure 1A), an inactive ester prodrug, is widely used to treat essential hypertension and heart failure [5]. During absorption from the gastrointestinal tract, it is rapidly and completely hydrolysed into candesartan, which is a highly potent and selective non-peptide angiotensin-II type-1 (AT1) receptor antagonist [6]. Candesartan cilexetil, as a new antagonist of AT1, has attracted greater attention of the antihypertensive drugs market [7]. However, the oral bioavailability of candesartan cilexetil (~15 %) is not as good as expected, mainly because of its poor water-solubility, efflux by drug resistance pumps in intestinal epithelial cells (P-glycoprotein), and first pass metabolism by cytochrome P450 3A4 [8,9]. Thus, several attempts were made to improve the dissolution rate and bioavailability of candesartan cilexetil, such as preparation of solid dispersions [10-12], cyclodextrins inclusion complexes [13], self-emulsifying drug delivery system [14], nanoparticles [15], or preparation of micelles [16]. Although much progress has been achieved through previous research, many formulations were normally prepared as liquids that is considered unfriendly to the environment and some formulations used large quantity of surfactants, which can induce gastrointestinal irritation.

Figure 1: Chemical structures
A. Candesartan cilexetil and B. glycyrrhizic acid

In this study, solid dispersion of candesartan cilexetil were prepared employing the solid-state mechanochemistry, which has been found to be green, environment protecting, fast and an efficient process technology for pharmaceutical solid dispersion preparation [17,18]. Moreover, high fever, which could result by the use of a partial decomposed drug could be avoided [19]. Mechanochemical technology was widely used in terms of improving the water solubility of poorly soluble drugs, such as the preparation of solid dispersions, cyclodextrins inclusion complexes, eutectic and so on [20]. Recently, the use of mechanochemistry has become very attractive in the field of pharmaceutical industry to enhance the dissolution rate of poorly water-soluble drugs [21]. In fact, compared with traditional “liquid phase” method, mechanochemical process offers significant advantages such as one-stage process, absence of solvents or melts and respective additional procedures, high strength of formed complexes and low operating costs [22,23]. Recent publications confirmed the prospectivity of mechanochemical approach on the examples of α-lipoic acid, simvastatin and other drugs [24-27].

Glycyrrhizic acid (GA, Figure 1B) is a good soluble natural saponin, extracted from liquorice roots, and widely applied as flavouring and sweetener. GA is a conjugate of two glucuronic acid molecules and a GA molecule and is capable of formation large micellelike aggregates in aqueous and water-alcohol solutions due to its amphiphilic properties [28]. Poorly watersoluble drugs can form solid dispersion with GA, which leads to increased solubility and therapeutic effect and, consequently, reduces the therapeutic doses of these drugs [29-31]. In addition, GA can increase the permeability of cell membranes for small molecules [32]. In the present investigation, a solid dispersion of candesartan cilexetil with GA was synthetized via ball milling. The complex formed was evaluated with X-ray diffraction (XRD), differential scanning calorimetry (DSC), Fourier-transform infrared spectroscopy (FTIR), scanning electron microscopy (SEM) and its dissolution behaviour. In addition, the stability of ball milling products regarding illumination and hyperthermia behaviour was investigated.

Candesartan cilexetil/GA solid dispersion was prepared in a planetary micro mill with stainless steel jars, which possessed 50 ml volume. Rotational speed of stainless steel jars is 120 rpm. Steel balls (diameter 12 mm) were used as grinding bodies. The duration of mechanical processing was from 0.5 to 16 h (0.5, 2, 4, 8, and 16 h). To prepare the solid dispersion, candesartan cilexetil/ GA mass ratio 1/5, 1/10, 1/20 and 1/50 was used. All the products should over 100 mesh sieve and preserved in a driers with a low temperature after sealed. Physical mixtures of candesartan cilexetil and GA were prepared by blending them in a small bottle.

Solubility of samples was determined in water using a standardized shake bath method. The samples contained 30 mg candesartan cilexetil were placed in a HY-4 shaker-incubator (+37°, 200 rpm, Hangzhou Dewei Instrument Technology Co., Ltd. Hangzhou, China) for 48 h. The samples were then f﻿iltered through a 0.45 μm membrane filter and the filtrate was assayed per high performance liquid chromatography (HPLC). The test was parallel to the determination of three times.

Waters 2695 HPLC system was used to determine the concentration of candesartan cilexetil. The HPLC system equipped with an UV detector set at 254 nm. Chromatographic analysis was performed on a reverse phase column (5 μm, 4.6×50 mm, Zorbax Eclipse XDB-C18) at ambient temperature. The mobile phase consisted of potassium dihydrogen phosphate buffer solution (pH 4.0) and acetonitrile (20:80, v/v). The flow rate was 1.0 ml/min and the injection volume was 5 μl for each sample. The calibration curve was rectilinear in the concentration range of 10-100 μg/ml with a correlation coefficient of 0.9999. The inter/ intraday accuracy and precision was within a relative standard deviation of ≤5 %.

Content test for candesartan cilexetil and its solid dispersions:

The co-milled products (containing 0.6 mg candesartan cilexetil) were weighed accurately by a BSA124S analytical balance (Sedorius, Germany). Then put them into different volumetric flasks with a capacity of 50 ml, respectively, and then added the ethanol into the volumetric flask as a solution until all components of complexes were completely dissolved. Added in ethanol up to the scale mark. The samples were suitably diluted and assayed by HPLC. The test replicates three times and calculates the percentage of practical and theoretical drug content in the grinding product (Table 1).

Same quality (~0.2 g) of candesartan cilexetil and the co-milled binary systems complexes (w/w=1:5,1:10 and 1:20 milling time 8 h) were divided into 3 equal portions. One was stored in a stability test chamber (DHG-9240A, Yiheng Scientific Instrument Co., LTD., Shanghai) under dry conditions at 60±0.5° to test the thermal stability of samples. The samples were taken out on day 5 and day 10, dissolved in ethanol and assayed using HPLC to calculate the contents of candesartan cilexetil.

Determination of the dissolution rate in this study was according to method of the FDA [34]. The amount of milled products equivalent to 16 mg candesartan cilexetil and pure candesartan cilexetil were determined using a HTY-EU802 rotating paddle apparatus. Phosphate buffer of pH 6.7 was used as the dissolution medium (37±0.5°, 900 ml), and the paddle speed was set at 50 rpm. Five millilitre aliquots were withdrawn at 5, 10, 15, 30, 45 and 60 min, each time replacing the volume of sample with equal volume of preheated dissolution medium to maintain sink condition. The samples were filtered through 0.45 μm membrane filter and assayed for drug concentration using a HPLC method that was described earlier. Each dissolution rate test was repeated three times.

DSC thermograms were obtained under argon gas flow of 10 ml/min. Calibration of the DSC instrument (Instrument Scientific Specialists Inc., Omaha, NE, USA) was carried out using indium as a standard. Sample powders (5 to 7 mg) were crimped in an aluminium pan and heated at a rate of 10 K/min from 20° up to 250°.

Powder XRD was used to assess the degree of crystallinity of cogrinding products. XRD analysis was performed using an X'Pert PRO X-ray diffractometer (PA Analytical, Holland) with a CuKα radiation source at 40 kV voltage, 30 mA current and a scanning speed of 2 degrees/min from 0 to 60°.

Infrared spectra of the samples were obtained using a Niclolet Avatar 370 instrument (Thermo Niclolet Corporation, USA). All samples were mixed with KBr for compressing into a thin tablet. The wave number of FTIR spectra ranged from 400 to 4000 cm−1 with a resolution of 2 cm−1.

The physical status of candesartan cilexetil in solid dispersion was further confirmed by XRD analysis (Figure 2B). Candesartan cilexetil showed the typical peaks at 2 θ values of 9.9, 17.26, 18.7, 19.62, 20.52, 23.14, and 25.16 degrees, indicating that candesartan cilexetil existed as crystalline form [13]. The characteristic peaks also existed in the physical mixture, which indicated that there was no interaction between drug and GA by the way of direct superposition. On the contrary, a broad peak without any drug crystalline peak was detected in the diffraction pattern of the mechanical activation complexes. The XRD data indicated that candesartan cilexetil was in the amorphous or molecular state in the mechanical activation solid dispersion, which accorded with the DSC measurements. 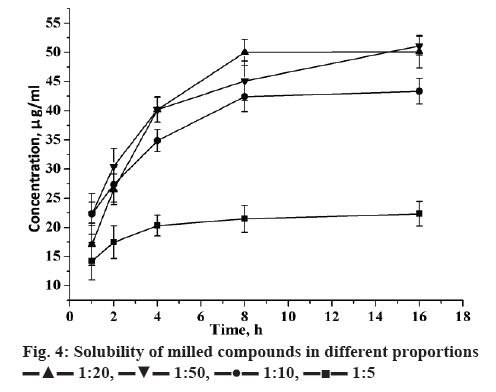 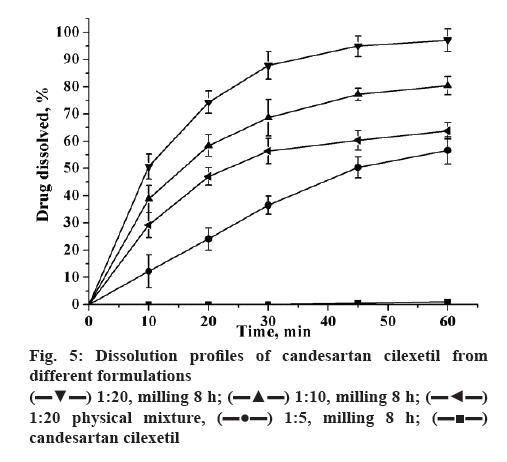 In this study, mechanochemical milling process that allows getting final product in one technological step without using of any organic solvents has been applied to prepare solid dispersions of candesartan cilexetil with GA. Formation of the solid dispersions was proved by XRD, FTIR and DSC analysis. In vitro drug release showed a significant increase in drug’s dissolution rate after formation a solid dispersion with GA. On the other hand, the stability assay showed that the chemical stability of solid dispersions had an enhanced compared with pure candesartan cilexetil. In conclusion, solid state mechanochemical milling process could be a most useful method for the preparation of complexes of candesartan cilexetil with GA, which are promising to improve the oral bioavailability of candesartan cilexetil and might be considered for development of the lowdose drug market. This study still has some limitation. In stability study, we only calculate the drug content, without using other determination methods. In next studies, it is better to use drug content determination combined with FTIR, DSC and NMR to investigate the stability, which makes the results more convincing.