A simple, rapid, specific and highly sensitive spectrofluorimetric method has been developed for the quantification of dabigatran etexilate mesylate in bulk and capsule dosage form. A linear relationship was found between fluorescence intensity and concentration in the range of 0.01-1.0 μg/ml in dimethyl sulphoxide as solvent at an emission wavelength of 391 nm after excitation at 334 nm, with a good correlation coefficient (0.989). The detection and quantification limits were found to be 0.005 and 0.015 μg/ml, respectively. The proposed method was applied for dabigatran etexilate mesylate capsules, results reveal with percentage recovery of 102% and percentage relative standard deviation values were found to be less than 2 for accuracy and precision studies. The proposed method was validated for linearity, range, accuracy, precision, limit of detection and quantification according to International Conference on Harmonization guidelines. Statistical analysis of the results revealed high accuracy and good precision. The suggested procedures could be used for the determination of dabigatran etexilate mesylate in bulk and capsule dosage form in quality control laboratories of industries as well as in academic institutions.

Dabigatran etexilate mesylate (DAB) chemically ethyl 3-(1{2 [({4 [amino ({ [(hexyloxy) carbonyl] imino}) methyl] phenyl} amino) methyl]-1-methyl- 1H-1,3-benzodiazol-5-yl}-N-(pyridin-2-yl)formamido) propanoate is a selective anticoagulant, used as stoke and systemic embolism in patient with atrial fibrillation. Literature survey revealed that, few methods were reported for quantification of DAB by UV/Vis spectrophotometry [1,2] and RP-HPLC [3,4]. To the best of our knowledge, no method reported on the use of spectrofluorimetry for the quantification of DAB. Spectrofluorimetry has assumed a major role in drug analysis because of its greater sensitivity and selectivity than absorption spectrophotometry [5-11]. Hence, we aimed to develop and validate a simple, precise, accurate, selective and high sensitive spectrofluorimetric method for the estimation of DAB in pharmaceutical dosage form.

DAB molecule contains polycyclic aromatic systems like pyridine ring and benzodiazolin ring, in which more π electrons are available to exhibit fluorescence (fig. 1). For spectrofluorimetric method purpose, various solvents were investigated such as acetonitrile, methanol, DMSO, ethanol, DMF and different buffer systems. The fluorescence intensity of DAB was found only in DMSO solvent. Hence, we selected DMSO as solvent for quantification of DAB in bulk and pharmaceutical formulation at emission wavelength 391 nm after excitation wave length 334 nm as shown in fig. 2. 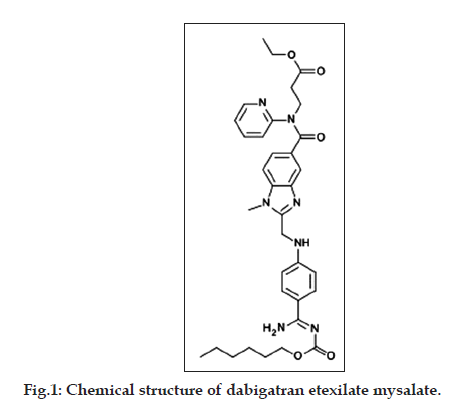 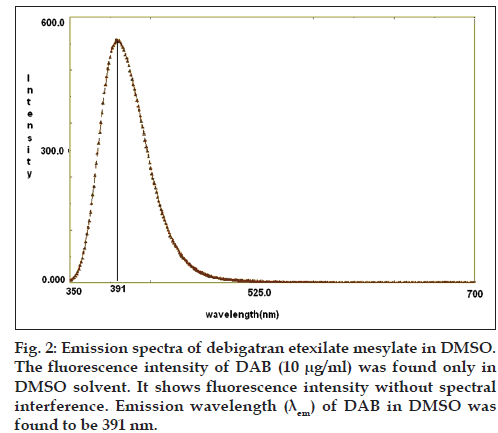 Standard DAB (10 mg) was weighed and transferred into 10 ml volumetric flask and dissolved in dimethyl sulphoxide (DMSO). The flask was shaken and volume was made up to the mark with DMSO. Further the stock solution was diluted with DMSO to get final concentration of 10 μg/ml and fluorescence intensity quantified by spectrofluorimeter.

The calibration curve was constructed by plotting the analyte fluorescence intensity against the concentration (μg/ml). Calibration curve was evaluated by its correlation coefficient. The stability of the drug was measured in DMSO and DAB was found to be stable for 72 h.

For the assay, twenty capsules of marketed formulation (Pradaxa) each containing 110 mg of DAB were taken and accurately weighed. Capsules were emptied and weight of granules was calculated by subtracting weight of each empty shell from each capsule weight. Average weight was determined and an accurately weighed quantity of granules equivalent to 10 mg of DAB was transferred into 10 ml volumetric flask and dissolved in 5 ml of DMSO and sonicated for 10 min. Then the volume is made up to mark with the DMSO and filtered through whatman filter paper. Further the filtrate was diluted with DMSO to get final concentrations within linearity range for quantification of DAB. Results were in good agreement with the label claim of the drug and reported in Table 1. The proposed method validated according to ICH guidelines [12].

The equation of the regression line was found to be Y=154.1x+12.37 with a correlation coefficient of 0.987, revealed that DAB was showing linear relationship between concentration (μg/ml) and fluorescence intensity. DAB was linear in the range of 0.01–1.0 μg/ml. The LOD and LOQ of the method were found to be 0.005 and 0.015 μg/ml respectively, which indicate the sensitivity of the method. DAB: Dabigatran etexilate mesylate, LOD: limit of detection, LOQ: limit of quantification

A linear calibration plot for the method was obtained over the calibration range of 0.01–1 μg/ml at an emission wavelength of 391 nm. The equation of the regression line was found to be Y=154.1x+12.37 with a correlation coefficient of 0.987. Optimum conditions of proposed method mentioned in Table 2. The percentage recoveries were conducted at three different levels (80, 100 and 120%) as per standard addition method and results of recovery were found to be in the range of 98.8-102.4%, indicates that the method is accurate. Results from precision expressed in terms of %RSD, found to be less than 2. No significant differences between intraday and interday precision, which indicated that the method is reproducible and reliable. The results of limit of detection (LOD) and limit of quantification (LOQ) revealed that proposed method was highly sensitive than previous methods. The % assay in commercial formulations was found to be in the range 98-102% by the proposed method and % RSD was less than 2, which indicates the accuracy of the proposed method. The results of the assay (Table 1) indicated that the method is specific for the assay of DAB without interference from excipients used in pharmaceutical formulations.

The amount of DAB found in formulation pradaxa was 10 mg. These amounts were within the limits. The % RSD for both formulations was <1, which indicates the accuracy of the proposed method, n=3. DAB: Dabigatran etexilate mesylate, RSD: relative standard deviation, SD: standard deviation.

It is concluded that the contemplated method was found to be highly sensitive from the LOD and LOQ values compared to the previously reported methods and simple for the quantification of DAB in pure form and pharmaceutical dosage form. The assay values were in good agreement with their respective label claim, which suggested no interference of formulation excipients in the estimation. The results obtained from validation proved that; the proposed method was scientifically sound. These advantages encourage that the proposed method can be routinely employed in quality control for analysis of DAB in tablet formulation.