Cassia is a genus of tropical flowering plant belonging to the family Caesalpiniaceae. There are many Cassia species worldwide used in herbal medicine. Plants in genus Cassia contain mainly anthraquinone compounds, which are the largest group of natural quinones used as laxatives and antifungal drug for skin diseases [1]. Several anthraquinones and their derivatives from Cassia species have been documented such as rhein, emodin, sennosides and aloe-emodin. Aloeemodin (Figure 1) is an anthraquinone found in plants (Aloe sp., Rhamnus sp. and Cassia sp.), fungi, lichens and insects [2] has interesting biological activities such as antiviral, antimicrobial, anticancer and hepatoprotective activities [3-6]. In Thailand, C. grandis is known as “Kanlaphruek” or “Kalapaphruek” in Thai language. This plant is wildly distributed as ornamental plant throughout the country. C. garrettiana is also a traditional Thai medicine called “Sa mae san” which has been used as emmenagogue, blood tonic for women and used to treat herpes zoster, leukaemia, and constipation [7,8]. Previous study identified aloe-emodin as the main anthraquinone isolated from C. grandis and C. garrettiana leaves [9-10]. 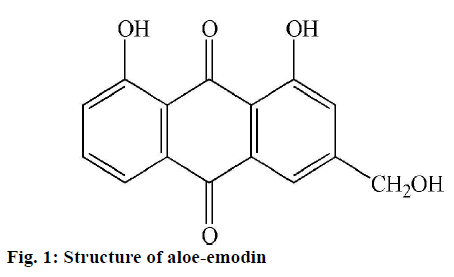 Thin-layer chromatography (TLC) is a fast screening method for compound separation and identification of herbal extracts. This method is frequently used as a qualitative and quantitative analysis as low cost of instrumentation, short time for analysis and easy to use [11,12]. Quantitative analysis can be performed using TLC densitometry and TLC image analysis. TLC densitometry is one of the suitable methods wildly used for quantitative analysis due to its accurate, precise and reliable procedure [13]. TLC image analysis using computer software technology has been in consideration as a simple, inexpensive and convenient quantitation method with good accuracy and precision for chemical compounds analysis in crude drug and medicinal plants [14]. Both methods successfully applied for quantification of chemical compounds in various herbal plants such as Artocarpus lakoocha, C. fistula, Senna siamia and Chromolaena odorata [15-18]. The quantification of aloe-emodin in C. grandis and C. garrettiana leaf extracts using TLC densitometry and TLC image analysis has not been reported. Thus, the objective of this study was to develop and validate TLC densitometry with winCATS software and TLC image analysis with ImageJ software for quantification of aloe-emodin contents in C. grandis and C. garrettiana leaves collected from different locations in Thailand.

The fresh mature leaves of C. grandis and C. garrettiana were collected from 15 locations in Thailand. Plant specimens were authenticated at the College of Public Health Sciences, Chulalongkorn University and Faculty of Pharmacy, Rangsit University, Thailand. Plant specimens were compared to the herbarium specimens at the Botanical Garden Organization, Ministry of Natural Resource. Voucher specimens were deposited at College of Public Health Sciences, Chulalongkorn University. Each authentic sample was dried in hot air oven at 45° and ground to a powder for phytochemical screening of anthraquinones.

Dilute hydrochloric acid (2 M) was added to the sample and the mixture was heated on a hot water bath for 15 min, then cooled and filtered. The filtrate was then extracted with dichloromethane. The dichloromethane layer was separated and shaken with ammonium hydroxide. Pink to red colour was developed in alkali layer [19].

A stock solution containing 0.5 mg/ml of standard aloe-emodin (Sigma-Aldrich, USA) was prepared in dichloromethane containing 10 % methanol and diluted to obtain a series dilution of 0.04, 0.08, 0.12, 0.16, and 0.20 mg/ml of standard solutions and then stored in refrigerator at 4°.

Preparation of dichloromethane extracts of C. grandis and C. garrettiana

Six grams of the leaf powder of C. grandis and C. garrettiana was extracted with dichloromethane using a Soxhlet apparatus. The extract was filtered and the solvent was evaporated by rotary evaporator. The yield of each plant sample was calculated and recorded. The extract was dissolved in dichloromethane containing 10 % methanol to make the final concentration 5 mg/ml of C. grandis and 20 mg/ml of C. garrettiana.

Three microliters of 15 dichloromethane extracted samples of C. grandis and C. garrettiana and aloeemodin standard solutions were applied on the TLCsilica gel 60 GF254 20×10 cm plate (E. Merck, Germany) using a Camag Linomat 5 automatic sample spotter (Camag, Switzerland) under a flow of nitrogen gas. Each sample band was set at 10 mm and distance between bands was 8.9 mm. The TLC plates were developed in a Camag glass twin-through chamber (20×10 cm), which was pre-saturated in mobile phase of hexaneethyl acetate (1:1 v/v) for 1 h at room temperature. The plate was scanned under wavelength at 434 nm using TLC scanner 3 (Camag, Switzerland) with winCATS software. Aloe-emodin contents in C. grandis and C. garrettiana leaves extract were quantitated by peak area. The test was done in triplicate.

TLC plate was photographed under ultraviolet light at 254 nm by a digital camera. Quantitative analysis of the aloe-emodin contents in C. grandis and C. garrettiana leaves extract and the colour intensity of spot on TLC plates were observed using ImageJ software (Department of Health and Human Services, National Institutes of Health, United State). The test was done in triplicate.

The calibration range was constructed by analysis of five concentrations of standard aloe-emodin in the range 0.12, 0.24, 0.36, 0.48 and 0.60 μg/spot. A plot of average area under curve versus concentration was obtained. The calibration range was expressed as the correlation coefficient (r2). The accuracy of the analytical procedure was performed by recovery of spiking known three concentrations of standard aloeemodin in the sample. The accuracy was determined as recovery of aloe-emodin in percent. The repeatability and intermediate precision were determined in the same day and in the three different days and expressed as percent relative standard deviation (% RSD). LOD and LOQ were calculated from the calibration curve as 3.3 (SD/S) and 10 (SD/S), respectively where, SD was the standard deviation of regression line and S was the slope of regression line.

The specificity of the method was ascertained by analysing the standard solutions and sample extracts. The bands for aloe-emodin in samples were confirmed by comparing the Rf value and UV absorbance spectra of the bands with those of standard. The peak purity of sample was assessed by comparing the overlay spectra of standard aloe-emodin and sample extracts at three different positions, peak start, peak apex and peak end positions of the spot detected at 434 nm. The robustness of the method was done by slightly changing the suitable mobile phase ratio in the experiment and interpreted as % RSD of peak areas.

The chromatographic condition for quantitating aloeemodin contents was examined using silica gel 60 GF254. The selected mobile phase, hexane-ethyl acetate (1:1 v/v) demonstrated the best separation of aloeemodin in C. grandis and C. garrettiana leaves with Rf value 0.50±0.007 and 0.50±0.009, respectively. The aloe-emodin band of the plant samples was confirmed by comparing an Rf value with standard aloe-emodin. 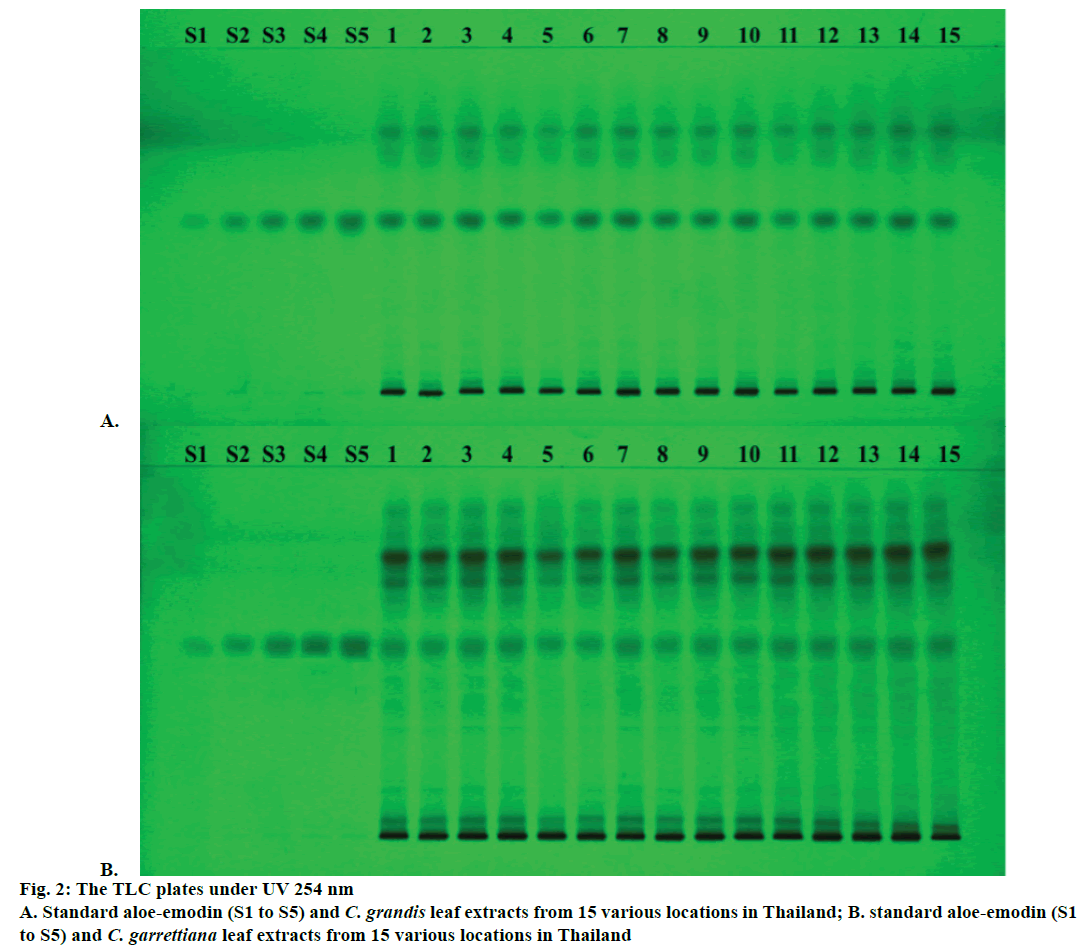 The method was validated for its linearity, specificity, accuracy, precision, LOD, LOQ and robustness. The linear calibration curves of aloe-emodin contents were ranged from 0.12-0.60 μg/spot. The specificity was confirmed by comparing UV spectrum of the peak in standard aloe-emodin and all 15 samples. The result showed the maximum absorbance at the wavelength of 434 nm (Figure 2B). Good correlation of both samples was also obtained between standard and sample overlay spectra (r2>0.9950). The recovery values of both methods within accepted limit (98.16-103.38 and 97.58-107.86 % for C. grandis and 98.17-105.53 and 97.35-105.94 % for C. garrettiana). The repeatability and the intermediate precision of both methods of C. grandis and C. garrettiana were less than 3 % RSD.