A highly sensitive differential pulse polarographic method has been developed for the estimation of tegaserod maleate after treating it with hydrogen peroxide solution. The oxidation of tegaserod maleate is a reversible process as the oxidized product could be reduced at hanging mercury drop electrode in a quantitative manner using differential pulse polarography mode. The limit of quantification was 0.1ng/ml. The voltametric peak was obtained at -1.05 volts in presence of 0.1M potassium chloride as supporting electrolyte. The technique could be used successfully to analyze tegaserod maleate in its tablet formulation.

Tegaserod maleate (TM), 3,5-methoxy-1H-indole- 3-yl-methylene)-N-pentylcarbazimidamide hydrogen maleate[1], is a selective 5-HT4 receptor partial agonist with promotile activity in the gastrointestinal tract. The drug is not official in any Pharmacopoeia[2-4]. A thorough literature survey revealed a few HPLCMS[ 5,6], HPLC[7] and spectrophotometric[8,9] methods for the analysis of TM in plasma and formulations. Voltametry offers a group of highly selective and sensitive methods. Some reports are now available in literature[10,11] using these techniques for analyzing the compounds of pharmaceutical interest. In the present study, TM was analyzed in bulk and in tablet formulation by differential pulse polarography after treating it with hydrogen peroxide.

A Metrohm 757 Computrace VA voltameter linked to a computer was used for voltametric measurements. The multimode electrode Metrohm stand was used in hanging mercury drop and dropping mercury drop electrode mode. The three electrode system was completed by means of a saturated calomel electrode as reference electrode and a platinum wire auxillary electrode. The aqueous 0.1 M potassium chloride was prepared as per IP procedure. All the aqueous solutions were prepared in double distilled water.

Standard tegaserod maleate was obtained as a gift sample from Torrent Research Centre, Ahmedabad and was used as such without any purification. The commercial tablet formulation Tegib-6 (Torrent Pharmaceuticals, Ahmedabad, India) was procured from local pharmacy.

Twenty millilitres of 0.1 M KCl was taken in the polarographic cell and nitrogen was purged through the solution for 300 s. An aliquot (1 μl–1 ml) from the standard TM solution was then added to KCl and purging of nitrogen was continued for 10 s. The differential pulse mode was used with pulse amplitude of 50 mV and a drop time of 0.8s. The polarogram was recorded after a sweep equilibration time of 10 s.

Twenty tablets (Tegib-6 of Torrent Pharmaceuticals) were triturated to a fine powder and weighed. Powder equivalent to 10 mg was weighed and treated with 5 ml of 3% H2O2 as described above. The estimation was done using standard addition method by adding the standard TM solution at two levels.

It was observed that TM is easily oxidized so we attempted to develop a voltametric method using glassy carbon electrode, having attempts to get a voltammogram using glassy carbon electrode or the anodic range of DME were unsuccessful. But the TM solution already treated with hydrogen peroxide gave a sharp polarogram in the cathodic range of dropping mercury electrode. Therefore the polarographic method was developed in the differential pulse polarographic mode using hanging mercury drop electrode (HMDE). The peak was obtained at -1.05 V (fig. 1). The effect of the composition of supporting electrolyte on the shape of polarogram of TM was studied and different media tried were Britton- Robinson buffers (pH 6-12), phosphate buffer (pH range 2-7) and 0.1 M lithium chloride but 0.1 M KCl gave the best results in the form of a sharp and well defined polarogram. Using 0.1M KCl as supporting electrolyte, working parameters of differential pulse polarography were established and effect of deposition potential, pulse amplitude and voltage step time were studied. The best polarogram was obtained with deposition potential -0.5 V, deposition time 68 s, drop size 4, equilibration time 10 s, voltage step 0.006 V, pulse amplitude 0.05 s and voltage step time 0.4 s. These optimized parameters are shown in Table 1. As the polarogram was smooth, Triton-X 100 or any other surfactant was not evaluated. 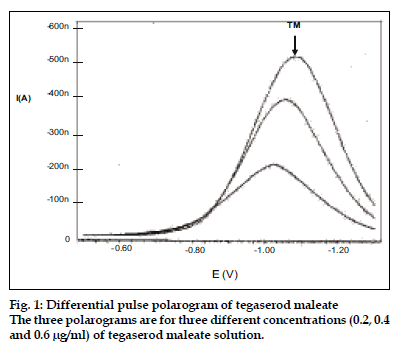 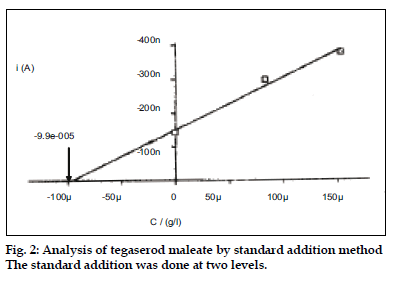 The reproducibility of polarographic response was evaluated and relative standard deviation was calculated to be 0.56% for six determinations. The limit of quantification was 0.1 ng/ml, estimated as 0.1 μg/μl. The technique was applied to estimate TM in pharmaceutical preparations by standard addition method (fig. 2). The results showed 100.32±0.68% recovery suggesting results to be in good agreement with the label claim. The method though an indirect method but is highly sensitive and can be used to monitor the very small concentrations of TM.

The authors are thankful to M/s Torrent Research Centre, Ahmedabad for providing the gift sample of tegaserod maleate. Thanks are also due to Mr. Vinod Salunke, Metrohm (India) for his kind help. One of the authors, H. A. Raj is highly grateful to University Grants Commision for providing financial support in the form of junior research fellowship during this work.