The National Cholesterol Education Program – Adult Treatment Panel III (NCEP ATP III) has laid down guidelines for defining a typical patient of metabolic syndrome. As per NCEP ATP III definition, metabolic syndrome is identified when three or more of the following five components are present: (1) elevated waist circumference (WC), (2) elevated triglyceride (TG), (3) reduced high-density lipoprotein (HDL)-cholesterol, (4) elevated blood pressure (BP) and (5) elevated fasting plasma glucose (FPG) or already diagnosed to have diabetes mellitus (DM). Long-term cardiovascular complications in metabolic syndrome are a major cause of mortality and morbidity in India and forecasted estimates in this domain of research are scarcely reported in literature. Metabolic syndrome, first defined by the World Health Organisation (WHO) in 1998 [18], has been christened into a new definition by the International Diabetes Federation (IDF) in 2005 [19]. This gives an important aspect of the NCEP-ATPIII definition (NCEP 2001) and updated in 2005 [20]. The major variables in the current definitions include abdominal obesity, BP elevation, dyslipidaemia and hyperglycaemia with varying cut-off levels.

The UK Prospective Diabetes Study (UKPDS) risk engine is most widely known and used for determination of long-term cardiovascular events. Various investigators have predicted the risk score specifically for diabetic patients, either newly diagnosed patients or those already receiving treatment [21-25] across the globe. However, a couple of studies from India have employed UKPDS risk engine [1]. It forecasts the risk of vascular diseases for 10 years. It predicts the absolute CHD risk using traditional risk factors such as body mass index (BMI), age, sex, smoking, systolic BP, total cholesterol, HDL-cholesterol, atrial fibrillation, ethnicity, duration of diabetes and glycated haemoglobin (HbA1c) [26]. Hence, in the present investigation, we estimated the long-term cardiovascular events associated with a representative Indian population of patients suffering from metabolic syndrome.

The study protocol was approved by the scientific committee of Bharati Vidyapeeth Deemed University, Poona College of Pharmacy, Pune, India, Institutional human ethics committee and permission was granted by the governing authorities of Agarwal hospital, Khenat hospital and Dhekane clinic, Pune to interact and inquire information regarding BMI, age, sex, smoking, systolic BP, total cholesterol HDL-cholesterol, atrial fibrillation, ethnicity, duration of diabetes and HbA1c from the patients attending the outpatient departments of these hospitals. If the patients were unable to provide the required information, the concerned physician was consulted or the patient records were used as the source of the data. The patients agreed to participate in the study after filling a well-defined informed consent form in local language (Marathi). A written permission was granted by UKPDS, UK authorities to carry out this academic noncommercial research using UKPDS risk engine within the aegis of the university.

Patient level data was collated from 567 diabetic patients suffering from metabolic syndrome through structured interviews and physician records regarding the input variables, which were entered into the UKPDS risk engine. The patients of metabolic syndrome were selected according to guidelines of NCEP ATP III, modified NCEP ATP III and IDF criteria. Projections for 10 simulated years were run on the engine and the output determined. The data for each patient was processed using the UKPDS risk engine to calculate an estimate of the forecasted value for the cardiovascular complications after a period of 10 years.

The UKPDS defines myocardial infarction by the WHO clinical criteria (either total cholesterol and HDL enzyme rise or pathological Q-wave in ECG). The risk engine cardiac endpoint is CHD, defined by either myocardial infarction (fatal or nonfatal) or sudden death. The risk engine stroke endpoint is stroke as defined by the UKPDS: either death attributed to stroke, or stroke with symptoms or signs persisting for more than 1 month. The risk engine version 2 calculates the risk that first CHD is fatal within 6 months. This will slightly underestimate the total rate of fatal CHD. Later versions of the risk engine will calculate total risk of fatal CHD. The same remarks apply to fatal stroke.

Baseline characteristics are presented as means, median (interquartile range). The estimated 10-year first CHD risk was calculated for each participant using the UKPDS algorithms. Calibration of the model was visually checked by plotting the predicted probabilities estimated by the prediction models against the observed proportion of first CHD events UKPDS and fatal CHD events score. Participants were grouped into CHD and fatal CHD depends on quintiles of predicted CHD risk within 10 years of follow-up.

In the present investigation, figs. 1 and 2 depicted that various vascular parameters such as systolic BP, total cholesterol and HDL cause significant progression of disease and finally lead to morbidity and mortality. A 10-year forecasted estimate of the cardiovascular events governs higher risk of disease in patients with metabolic syndrome than normal people. The UKPDS risk engine output consisted of estimates of absolute and relative risk of CHD (congestive heart disease), fatal CHD, stroke and fatal stroke after a period of 10 years. The baselines characteristics are represented in Table 1. The baseline characteristics correlate with the symptoms of metabolic syndrome patients. 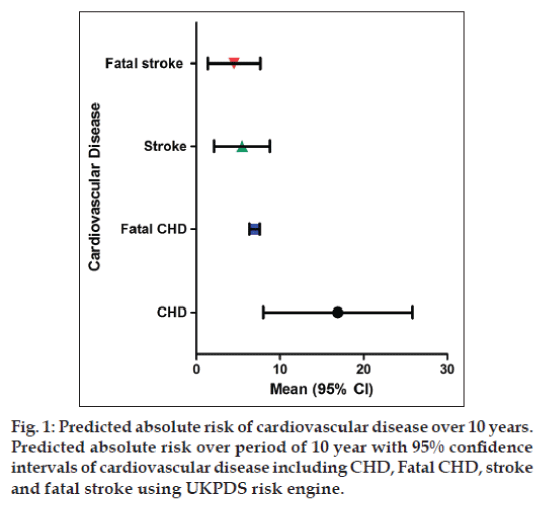 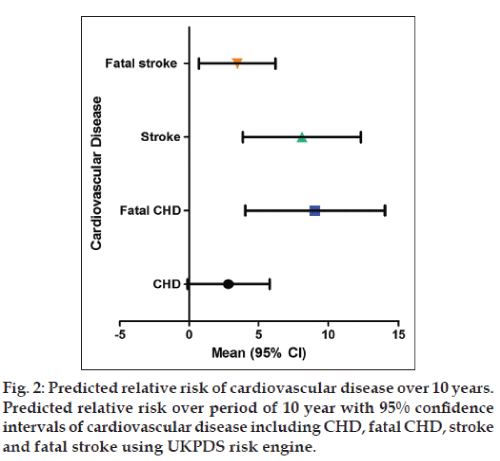 To our knowledge, this is a pioneer study in India that uses UKPDS risk engine to predict long-term cardiovascular risk factors in patients with metabolic syndrome. The inputs required by the engine are all readily measured in clinical practice, and routinely reported in research for maximum applicability. UKPDS outcomes model has been incorporated in the UKPDS Risk Engine software, which is available to noncommercial users without charge from UKPDS website (http://www.dtu.ox.ac.uk/riskengine/download. php) [19].

UKPDS was generally conducted in the White, Afro- Caribbean or Asian-Indian ethnic group patients [23]. The western Indian population of metabolic syndrome patients from Pune, who have been included in the study, may be considered to be a representative of the general Asian-Indian population. The present investigation gives a clear picture of long-term cardiovascular events in metabolic syndrome patients, that is the absolute risk for CHD, fatal CHD, stroke and fatal stroke for 10 years was 3.79, 9.6, 7.91 and 3.57 years, respectively. Whereas the relative risk for CHD, fatal CHD, stroke and fatal stroke was 17.8, 7, 5.9 and 4.7 years, respectively. UKPDS risk engine simulates risk of cardiovascular events in patients for 10 years.

Sedentary lifestyle has a greater impact in the development of metabolic syndrome. The findings of the present investigation are in accordance with the findings of Kothari et al. who used a similar risk engine to evaluate the risk of stroke in 4549 type II diabetes patients in the UKPDS [23]. Moreover, a similar study has been published by Simmons et al. who examined the performance of the UKPDS Risk Engine (version 3) and the Framingham risk equations in estimating CVD incidence in various populations [32]. The forecasted risk of long-term cardiovascular events will contribute to a better control of the metabolic disorders. Measures need to be taken to alleviate the long-term CVDs and to halt the progression of cardiovascular complications and mortality [33].

The authors would like to acknowledge Dr. S. S. Kadam, Vice-Chancellor and Dr. K. R. Mahadik, Principal, Poona College of Pharmacy, Bharati Vidyapeeth Deemed University, Pune, India, for providing necessary facilities to carry out the study. The authors are also thankful to the UKPDS risk engine development team and the UKPDS outcomes model development team to grant the permission to use these engines for noncommercial academic research purpose.