The standard text[1,2] specifies the microencapsulation and application of different polymers. Ethylene vinyl acetate copolymer (EVA) turned into a copolymer of ethylene and vinyl acetate. Although EVA has properly having good film forming properties[3,4] its potential applications in microencapsulation has not been studied yet. We reported earlier[5] the preparation of EVA microcapsules by emulsion solvent evaporation method. In this work, nifedipine was microencapsulated by EVA and the effects of controlled release of the microcapsules obtained were evaluated by in vitro and in vivo methods.

Nifedipine was used to treat angina pectoris and control high blood pressure and has a short biological half-life of 2-3 h, which can be rapidly cleared and the antihypertensive effect lasts for a few hours[6]. Therefore, nifedipine needs to extend its time of action and improve patient compliance, thus requiring a sustained release (SR) product. The SR nifedipine product also prevents adverse reactions associated with vasodilators, such as hot flashes and palpitations. Nifedipine SR tablets were officially used in United States Pharmacopoeia (USP) XXIV.

EVA copolymer (0.5 g) was mixed with warm chloroform (25 ml) to form a homogeneous polymer solution. Add the nifedipine (0.8 g) of the core material to the polymer solution (10 ml) and mix well. The providing mixture was introduced in a dilute stream into 200 ml of aqueous CMC (0.5 %) sodium solution contained in a 450 ml beaker with stirring at 1000 rpm to emulsify the adjusted dispersion, use a Remi Medium Duty Stirrer (RQT 124) with a speedometer for mixing. The chloroform solvent was then removed by continuous stirring for 3 h at room temperature (28°) to produce spherical microcapsules. The microcapsules were collected by vacuum filtration and washed several times with water. The product was then air dried to obtain microcapsules. Different proportions of the core for coating the substance were used to prepare microcapsules with different thickness of the coating, namely 9:1 (MC 1), 8:2 (MC 2), 7:3 (MC3) and 6:4 (MC4).

Based on the measurement of Ultraviolet (UV) absorbance at 238 nm in a pH 6.8 phosphate buffer, the content of nifedipine in the microcapsules was estimated by UV spectrophotometry. The linearity, accuracy and accuracy of the method are verified. The method complies with Beer’s law in the concentration range of 1-10 μg/ml. When repeating the determination of the standard drug solution (n=6), the average error (accuracy) and relative standard deviation (precision) were found to be 0.6 % and 1.5 % respectively.

Use the following formula to calculate the microencapsulation efficacy, microencapsulation efficacy= (percent of estimated drug content/percent of theoretical drug content)×100. For analysis of the particle size distribution, the different batch sizes were separated by sieving on standard sieves. Weigh the amount retained on the different sieves. The wall thickness of the microcapsules was determined using the method of Luu et al[7]. Using the equation, h=r̄(1-p) d1/3[pd2+(1-p)d1], where h is the wall thickness, r̄ is the radius of the microcapsule arithmetic mean, d1 is the core material density, d2 is the coating material density and p is the drug proportion in the microcapsules.

Nifedipine release from 20/35 and 35/60 size EVAcoated microcapsules in phosphate buffer pH 6.8 containing 1 % Sodium lauryl sulfate (SLS) (900 ml) was studied using a speed test apparatus. Eight station dissolution rate (model Disso2000, M/s Lab India) with a paddle stirrer at 50 rpm and 37±0.50 as prescribed for nifedipine extended release tablets in USP XXIV[8]. A sample of microcapsules equivalent to 20 mg of nifedipine has been used in the test. The samples were drawn through a filter (0.45 μm) at different time intervals and the double beam spectrophotometer Shimadzu UV-150 was used to determine the level of nifedipine to 238 nm. Drug release experiments were performed in three times.

Differential scanning calorimetry (DSC) was performed on nifedipine, EVA and EVA nifedipine using model DSC Sieko (Japan) 220C. Samples were sealed in aluminum pans and the DSC thermograms were recorded at a heating rate of 10°/min from 30 to 300°.

Pharmacokinetic evaluation was done on conventional soft gelatin capsules of nifedipine (10 mg) as the reference standard and EVA microcapsules, MC 1 (Size 20/35) equivalent to 20 mg of nifedipine in healthy human subjects as per a crossover randomized block design (n=4).

Four human subjects were healthy males between the age range 24-28 y (average weight 605 kg) were included in this study. All subjects were admitted to the study received oral and written explanation of the purpose of the trial and the properties of the drugs given. Each subject gave written informed consent, confirmed that participation is voluntary. They were ordered not to take drugs during the study period. Before the study started, the approval of the ethics committee was obtained. Each subject was given a single product once a month. If it is a soft capsule, was given at a dose of 10 mg of nifedipine; if it is a microcapsule EVA, it is given at a dose of 20 mg of nifedipine. After fasting overnight, the product is taken orally in the morning. Within 4 h after application of the product, no food or liquids are allowed except water.

After collecting blood samples 0 h (blank), the product under investigation were taken orally with a glass of water. Blood samples (5 ml) were collected 0.5, 1.0, 1.5, 2.0, 3.0, 4.0, 6.0, 8.0, 10.0 and 12.0 h after administration. The blood samples were centrifuged at 5000 rpm and the serum was separated collected in a dry tube and all samples were stored in refrigerated conditions and subsequently measured. Serum concentrations of nifedipine were determined by Highperformance liquid chromatography (HPLC) method known[9], as described below.

Add methanol (100 μl) and acetonitrile (1 ml) to 0.5 ml of serum and stirred for 5 min with a mixer circulation. After centrifugation at 5000 rpm for 5 min, transfer 1 ml of the supernatant to a tube stopper, and then add 5 ml of a mixture of chloroform-acetone (2:1 v/v). The mixture was stirred for 15 min and then centrifuged at 5000 rpm for 5 min. A portion of the organic layer (4.5 ml) was transferred to a boiling tube and evaporated to dryness at 40° under reduced pressure. The residue was dissolved in 0.5 ml mobile phase and 20 μl of the solution was injected into an HPLC column (Shimadzu) (C-18 RP 250x4.6 mm internal diameter; particle size: 5 m).

Nifedipine EVA microcapsules were prepared by the solvent emulsion evaporation method, wherein chloroform was the solvent of the polymer. It has been found that the microcapsules were discrete free flowing, spherical and multi-core and integral type. The size can be separated and a microcapsule more uniform size range can be easily obtained. Analysis of the size of the individual microcapsules shows that about 64 % and 23 % of the size of the meshes were in the range of -20+35 (670 μm) and -35+60 mesh ((375 μm) respectively. A log-normal size distribution of the microcapsules in all batches was prepared and it was observed.

*Fig in parentheses are coefficient of variation (CV) values 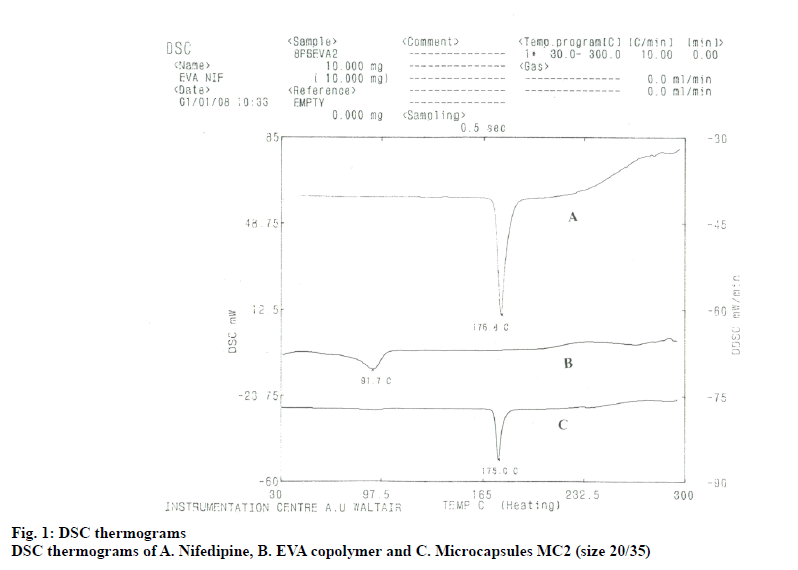 SR tablet as specified in the test release rate of nifedipine in the USP XXIV, nifedipine release microcapsule was studied in a pH 6.8 phosphate buffer containing 1 % SLS . Nifedipine slowly releases from the microcapsules and extends over a long period of time (Table 2). Release follows a first order kinetics (r>0.98) and depends on the coat: core ratio and size of the microcapsules. As more the ratio of layer, the release of nifedipine decreases. 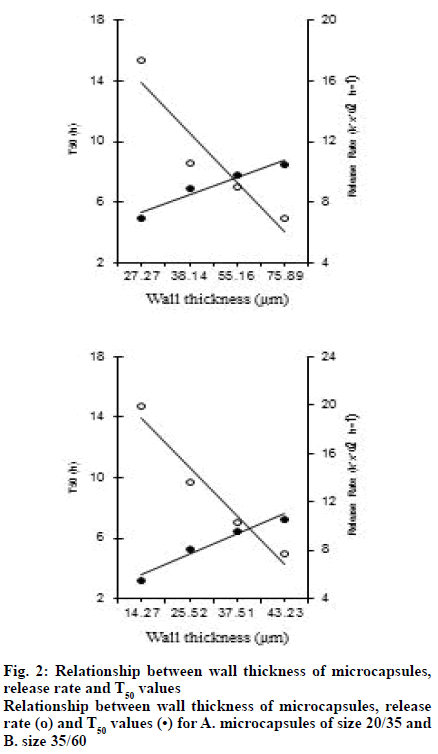 The release of nifedipine from EVA microcapsules was compared with the theoretical SR required based on its pharmacokinetics. According to the recommendations of Wagner[12], the theoretical SR rate (ko) and the required dose were calculated based upon the nifedipine pharmacokinetic parameters. The SR product of nifedipine should have contain a total dose of 20 mg and should release 5 mg within the 1 h and the remaining rest should be released at a rate of 1.38 mg/h.

Based on this rate, the theoretical SR curve required for the SR product of nifedipine was calculated. Nifedipine SR tablets were official in USP XXIV, which stipulates that these tablets release 10-30 % within 3 h, 40-65 % within 6 h and no less than 80 % within 12 h. The release of nifedipine from the microcapsule MC1 with a size of 20/35 was close to the theoretical SR required for nifedipine. These microcapsules also met the official (USP XXIV) release rate test specification for nifedipine SR tablets. 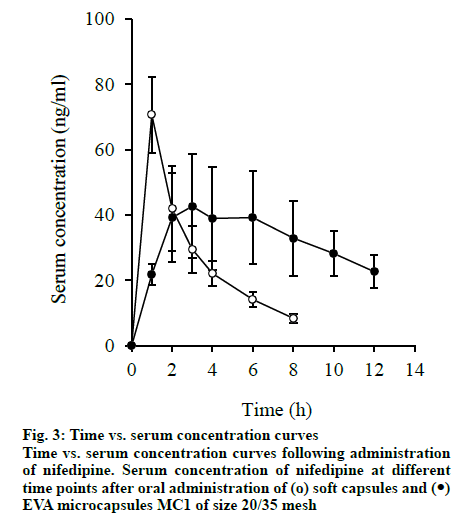 Therefore, EVA spherical microcapsules with nifedipine as the core may be prepared by the emulsion solvent evaporation method. Microcapsules were discrete, spherical, free-flowing, multi core and monolithic matrix types. The range of microencapsulation efficiency was 93-99 %. DSC and Infrared (IR) spectroscopy studies show that there was no interaction between EVA and nifedipine. The rate of nifedipine release from the microcapsules was very slow and depends on the coating: core ratio, wall thickness and size of the microcapsules.

The release was controlled by diffusion and follows first order kinetics. A good linear relationship was observed between the wall thickness of the microcapsules and the drug release rate and T50 value. The release amount of nifedipine in microcapsule MC 1 (Size 20/35) was close to the required theoretical SR amount and also meets the official release rate specification of nifedipine SR tablets (USP XXIV). These microcapsules also showed good SR characteristics in the evaluation of in vivo pharmacokinetics.