The plant Kaempferia rotunda Linn. has been explored for its anti oxidant potential in the present study. The antioxidant property was assessed by lipid peroxidation markers such as malonaldehyde (MDA) and 4-hydroxyl-2-nonenal (4-HNE). The lipid peroxidation byproducts are highly toxic and responsible for various diseases like myocardial infarction, diabetes mellitus, hepatic injury, atherosclerosis, rheumatoid arthritis and cancer. The chemical constituents of the plant were critically and qualitatively analyzed to confirm the presence of flavonoids and phenolic derivatives. Hence our objective has been designed to evaluate the antioxidant effect of Kaempferia rotunda linn. and its contribution to control the lipid peroxidation.

The plant Kaempferia rotunda linn. belongs to the family Zingiberaceae also named bhuichampaka (Sanskrit), bhuchampa (Hindi) and blackhorm (English). It is a fragrant aromatic herb with a tuberous rhizome distributed throughout India [5]. In some districts of Maharashtra the powder root is popular in mumps and also said to be used in the form of poultice, promotes suppuration. The main constitutent crotepoxide is useful for the inhibition of tumors [6].

Phytochemically the plant has been attributed to contain flavonoids, crotepoxide, chalcones, quercetin, flavonols, β-sitosterol, stigmosterol, syringic acid, protocatechuic acid and some hydrocarbons have been previously reported [7]. The recent literature review revealed that abundant presence of flavonoids in the plant of interest plays prime role in antioxidant mechanisms [8-10].

The tuberous rhizomes of Kaempferia rotunda Linn were collected during July-August from the various areas of Sikkim Himalayan region and authenticated by Botanical Survey of India, Gangtok, Sikkim. The dried, powdered rhizomes were subjected to Soxhlet extraction successively using methanol. The extract was filtered, concentrated in vacuum under reduced pressure. The yield value was found to be 8.5%. The extract was subjected to qualitative chemical investigation for phytochemical constituents like flavonoids, steroids, triterpenoids and crotepoxide.

The fresh goat liver was obtained from local market, stored in phosphate buffer, homogenized (1g/ml) and filtered to get clear homogenate. The lipid peroxidation indicator i.e. MDA was estimated using thiobarbituric acid reacting substances (TBARS) by the method of Ohkawa et al [12]. The lipid peroxidation was induced in goat liver homogenate by ferrous sulphate. The generated MDA reacts with thiobarbituric acid at pH 3.5, produces a pink coloured complex, which has λmax at 530 nm. The concentration of MDA was calculated by calibration of standard graph through regression method. The significance of the results was analyzed by statistical method.

The liver supernatant was mixed with 2,4- dinitrophenylhydrazine (DNPH) and incubated for 1 h at room temp. The formed adduct of 4-HNE and DNPH was measured at 350 nm in UV/Vis spectrophotometer [13]. The quantity of 4-HNE was calculated by linear regression analysis. The data were expressed as mean±SE differences between groups were analyzed using one way analysis of variance (ANOVA) followed by Bonferroni multiple range test. The results are statically significant at p <0.05 levels.

Each value is the mean concentration ± standard error of the mean. All values are significant at P<0.05

Table 1: In Vitro Effect Of Kaempferia Rotunda On Lipid Peroxidation 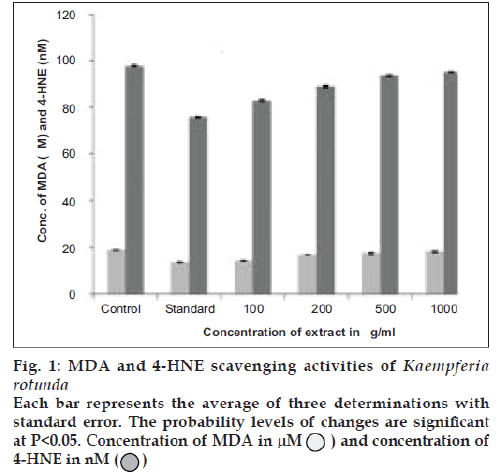 Figure 1: MDA and 4-HNE scavenging activities of Kaempferia rotunda Each bar represents the average of three determinations with standard error. The probability levels of changes are significant

At low dose the level of crotepoxide is low hence peroxidation is less and the flavanoids can scavange all the radicals. As a result the antioxidant property is more but in higher dose the total phenomena is reversed. The antioxidant property of extract was compared with standard antioxidant (ascorbic acid). The scavenging of the radicals by the methanol extract of Kaempferia rotunda in the above study has thus been correlated with the antioxidant potential of the plant and this information can be used to control the age dependent diseases mentioned above.