Present work reports extraction of mucilage of Eulophia campestris by multiple maceration technique using water and precipitation by acetone (36% w/w yield). Physicochemical characteristics of mucilage, such as solubility, swelling index, loss on drying, pH and viscosity, were studied and also microbial load was determined. The mucilage was evaluated for its granulating and binding properties in tablets, using paracetamol as a model drug. Mucilage was used in three different concentrations - 6, 8 and 10% w/v. The granules were prepared by wet granulation technique. The prepared granules were evaluated for percentage of fines, average particle size, total porosity, compressibility index and flow properties. The properties were compared with starch, which was used as a standard binder at 10% w/v concentration. The tablets were prepared and evaluated for content uniformity, hardness, friability, disintegration time and in vitro dissolution profiles. The tablets had good physicochemical properties, and the drug release was more than 85% within 3 h. The tablets prepared by using 10% mucilage as binder exhibited more hardness than by using 6 and 8% concentrations. Hence, 6 and 8% concentrations can be considered as ideal concentrations for preparation of tablets.

Mucilages are polyuronides consisting of sugar and uronicacid units. They are usually formed from the cell wall ordeposited on it in layers. They swell in water and form agel [1]. The usefulness of mucilages as emulsifying, gellingand suspending agents has been well documented [2]. Someof the mucilages have also been used in tablet formulationsas binding agents and also to sustain the drug release [3].Natural mucilages are nontoxic, non-irritant and act asemollients, stabilizers and stiffening agents [4].

Eulophia campestris Wall. (familyOrchidaceae) is a genusof terrestrial orchids, which yield the Salep of commerce. This is an herbaceous plant found throughout India and isindigenous to Persia and Afghanistan. Tubers of E. campestris yield a large quantity of mucilage to water and, on boiling even with 40 parts of water, form a thick jelly which is highly nutritious [5,6]. Hence the present work was attempted to evaluate binding properties of mucilage extracted from tubers of E. campestris.

The fresh tubers of E. campestris plant were collectedfrom Mandav region of Indore and authenticated in Botany Department, Devi AhilyaVishwavidyalaya,Indore. Paracetamol was used as model drug in the study, and it was purchased from Zig Pharmaceutical Pvt.Ltd., Indore. All the chemicals and other reagents used inthe study were of AR grade.

Mucilages are viscid, somewhat tenacious and generally adhesive liquids, prepared with water as a solvent. The mucilage was isolated from freshly dried and coarselypowdered tubers of E. campestris. The tubers weresteeped in water 24 h, boiled for 1 h and kept aside for 2 h to release mucilage into water. The material was squeezed in a muslin bag to remove the marc from the filtrate. The filtrate was again filtered under vacuum and added to equal volume of acetone to precipitate the mucilage. The mucilage was separated, dried in an oven at temperature less than 50°, powdered and passed through sieve number 80. The powdered mucilage was stored in desiccator until further use (yield: 36% w/w).

Physicochemical and microbiological properties of mucilage

The physicochemical properties such as solubility, swelling index, loss on drying, viscosity and microbial load of the mucilage were determined according toIndian pharmacopoeial procedures [7]. The pH of the mucilage was determined using a digital pH meter.

Paracetamol was used as a model drug to formulate granules. Starch was used as disintegrant, whereas lactose and talc were used as diluent and lubricant respectively. The binder solution was prepared by dissolving the mucilage of E. campestris in water at 6, 8 and 10% w/v concentrations. The granules were prepared by wet granulation process8. The batch size was 200 g. The drug, lactose, talc and starch were mixed thoroughly, and a sufficient volume of ~40 ml of 6, 8 and 10% w/v of mucilage of E. campestris was added slowly to the powder blend, and kneading was performed for ~10 min until formation of wet mass with enough cohesiveness. The wet mass was forced through a no. 16 sieve (1180 μm) and dried at 50° in a hot air oven for 10 h. The dried granules were re-sieved through a no. 20 sieve (850 μm). The prepared granules were then evaluated for percentage of fines, particle size and flow properties (by measurement of angle of repose) [8,9]. The bulk and tapped densities of the granules were assessed in accordance with the USP 25 using a tapped volumeterapparatus (Erweka, SVM101, Heusenstamm, Germany).Compressibility index of the granules was determined byCarr’s compressibility index [10–13]. Total porosity was alsodetermined as described before [10–13] by measuring thevolume occupied by selected weight of a powder and thetrue volume of granules.

Preparation and evaluation of tablets

The dried and coarsely powdered tubers of E. campestris yielded high percentage (36% w/w) of mucilage using acetone as mucilage-precipitating solvent. The physicochemical and microbiological properties of mucilage were determined and shown in Table 1. The extracted and purified mucilage was evaluated for microbial count (using bacterial and fungal load) and pH. The microbial count was found to be less than 120 CFU (Colony Forming Units) per gram of mucilage. The pH ofthe mucilage was found to be 7.5. Since the pH value ofthis mucilage is near to neutral, it may be less irritating ingastrointestinal tract and hence was suitable for uncoatedtablets.

The prepared granules were evaluated for percentageof fines, particle size and flow properties. The results areshown in Table 2. It was observed that the percentage offines was reduced as the concentration of mucilage wasincreased. The percentage of fines was a little higher ingranules prepared using 6% w/v mucilage as binder. Theflow property of granules was determined by angle ofrepose, which was found to be 30° to 32°. The meanparticle size (between 0.38 and 0.40 mm) was found to besatisfactory for preparation of tablets. Hence all thegranules exhibited good flow properties. Table 2 showsthat the bulk densities of the prepared granules werefound to decrease slightly by increasing concentrations of E. campestris mucilage. This result may be due to theformation of larger agglomerates and the decrease infines in the granules, as increasing E. campestris mucilageconcentrations provide more binding to the granules. The results of compressibility index (Table 2) indicate a decrease in flowability with increasing E. campestris mucilage concentrations; however, all formulations show good flow properties. In general, compressibility index values up to 15% result in good to excellent flow properties [11]. Percentage porosity values of the granules ranged from 30.29% to 38.32%, indicating that the granules are loosely packed and confirming that the particles are not of greatly different sizes. In general, a percentage porosity value below 26% shows that the particles in the powders are of greatly different sizes, and a value greater than 48% shows that particles in the powder are in the form of aggregates or flocculates [12]. Allthese results indicate that the granules possessed satisfactory flow properties, compressibility and porosity.

Three batches of 100 tablets were prepared using mucilage of E. campestris at three different concentrations viz., 6, 8 and 10%. Starch mucilage (10% w/v) was used as standard binder for comparison. The prepared tablets were evaluated for content uniformity, hardness,friability, disintegration time and in vitro dissolution profiles. The results are shown in Table 3.

The in vitro dissolution profile is shown in fig. 1. It was found that the drug release decreased with increase in concentration of mucilage. This study showed that the drug release from the tablets prepared using mucilage at three different concentrations was more than 85% in 3 h. These tablets had given reduced diffusion of drug, sincethe tablets produced a sticky film of hydration on the surface. This may be the reason for the reduced dissolution with increased mucilage concentration. 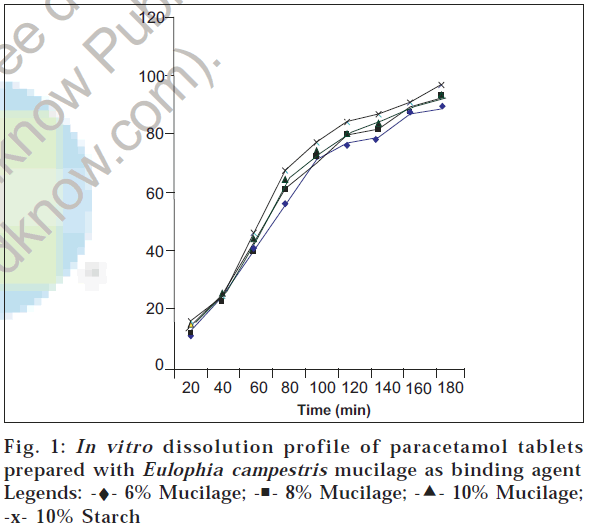 The authors are grateful to Zig Pharmaceutical Pvt. Ltd., Indore, for providing paracetamol drug. We owe our thanks to Prof. S. Upadhyay for taxonomical identification of the plant material.