Evaluation of Bioequivalence of Two Oral Formulations of Olanzapine

Olanzapine is an atypical antipsychotic drug, used for the management of schizophrenia and for the treatment of moderate to severe mania associated with bipolar disorder. The objective of the present randomised, crossover study was to compare the bioavailability of olanzapine 10 mg/5 ml powder for oral suspension with olanzapine 10 mg orally disintegrating tablet. Eighteen healthy male volunteers were randomly assigned to crossover, single-dose treatment regimens. Serial blood samples were collected, and plasma concentrations of olanzapine were analysed using the LCMS/ MS technique. Pharmacokinetic parameters and bioequivalence limits were calculated using non-compartmental methods. Average Cmax following administration of the single 10 mg disintegrating tablet formulation and 10 mg/5 ml suspension were 14.47±4.25 ng/ml and 13.56±3.99 ng/ml respectively. Corresponding median Tmax were 5.0 h and 6.0 h, respectively. The average AUC0–t values and AUC0–inf values were similar following each of the olanzapine preparations. Overall, the 90% Confidence Interval for the intra-individual ratios of the log-transformed Cmax and AUC values of the two formulations were within the bioequivalence interval of 80–125%. The study has demonstrated the bioequivalence of the 10 mg tablet and the 10 mg/5 ml oral suspension of olanzapine.

Schizophrenia is a relatively common, chronic and frequently devastating neuropsychiatric disorder, affecting about one percent of the world’s general population [1]. It is a symptomatically heterogeneous and multidimensional disorder; domains of psychopathology include positive (hallucinations, delusions, disorganization) and negative (social withdrawal, lack of emotion) symptoms and cognitive impairment (poor learning and reasoning ability) [2].

Olanzapine, a thienobenzodiazepine derivative, is an atypical antipsychotic drug, used for the management of schizophrenia and for the treatment of moderate to severe mania associated with bipolar disorder [4]. It is characterized by broader efficacy especially in the treatment of patients with psychopathic negative symptoms, lower incidence of extrapyrimidal symptoms and minimal pertubation of prolactin levels [5].

A choice of formulations of antipsychotic medications provides valuable options for treating patients with schizophrenia. Intramuscular injectable antipsychotics offer advantages over traditional oral tablets in the emergency treatment of the acute phase of schizophrenia, and long-acting depot formulations are useful in the stable phase, particularly when adherence problems exist. However, situations occur wherein patients have difficulty swallowing traditional oral tablets, or for whom an injectable formulation is contraindicated or unacceptable. Likewise, there are patients who appear to comply with tablet ingestion but instead conceal the medication between their gums and cheek and subsequently spit it out (“cheeking”). This may lead the clinician to wrongly conclude that the medication is ineffective, prompting either a premature discontinuation of an effective treatment or an inappropriate increase in dosage [6].

To address the problems of medication noncompliances that are common in real-life clinical settings, new formulation of olanzapine have been developed, which form an oral suspension on reconstitution. Unlike conventional tablets that must be taken with liquid and swallowed, an oral suspension has the additional advantage of being easier to swallow and hence a better method of administration for those patients who have problems swallowing tablets and may therefore enhance drug adherence in patients who are less than optimally compliant. Moreover, oral suspension allows better and accurate titration of dose for those requiring gradual adjustment of the dose. To avoid problems with the drug deteriorating, the formulation is provided as low moisture content freely flowing powder, which has to be suspended in aqueous media prior to administration.

The objective of the present study was to compare the bioavailability of olanzapine 10 mg/5 ml powder for oral suspension with olanzapine 10 mg orally disintegrating tablet in healthy adult male volunteers under fasting conditions.

The mean (range) age and weight was 28.83 years (22–39) and 62.80 kg (51.3–76.6). Eighteen healthy male volunteers between 22-39 years with BMI of 18.6–26.2 kg/m2 and minimum weight of 51.3 kg were enrolled. The volunteers were included after physical examination, electrocardiograms, chest X-ray and laboratory screening including, HBsAg, HBC and HIV serology and haematological and biochemical parameters.

Clinically relevant abnormal physical findings at the screening examination, which would interfere with the objectives of the study; clinically relevant abnormalities in the results of the laboratory screening evaluation; abnormal ECG; abnormal X-ray; habituation of tobacco necessitating uninterrupted tobacco consumption; addiction to alcohol or history of any drug abuse; history of kidney or liver dysfunction; history of drug allergy to the test drug or any drug chemically similar to the drug under investigation; administration/intake of any prescription or OTC medication for two weeks before the study; patients suffering from any chronic illness such as arthritis, asthma etc.; HIV, HBsAg, HCV positive volunteers; volunteers suffering from any psychiatric (acute or chronic) illness; administration of any investigational drug in the period 0 to 3 months before entry to the study; history of significant blood loss due to any reason, such as blood donation in the past 12 weeks; history of any bleeding disorder or history of acid peptic disease; existence of any surgical or medical condition, which, in the judgement of the clinical investigator, might interfere with the pharmacokinetics of olanzapine; inability to communicate or co-operate with the investigator due to language problem, poor mental development or impaired cerebral function.

The study was carried out in compliance with revised declaration of Helsinki for biomedical research involving human volunteers, good clinical practice (GCP) and good laboratory practice (GLP) guidelines. The bioequivalence study protocol was evaluated and approved by the ethics committee “Independent Ethics Committee”, Ahmedabad. Written informed consent was sought from all the volunteers enrolled in the study.

This study followed a single oral dose, open label, randomised, two-period, two-treatment, two-sequence crossover design with 14 days washout between the two periods. Volunteers reported to the study site for enrollment on the evening before the day of dosing in each period. The health status of each volunteer was evaluated for changes from pre-study/screening examination. Only eligible volunteers were housed from 14-16 h before dosing and until 24 h after dosing.

The volunteers were randomly assigned to a singledose treatment regimen of either test formulation (olanzapine 10 mg orally disintegrating tablet) or reference formulation (olanzapine 10 mg/5 ml powder for oral suspension). The olanzapine 10 mg/5 ml powder for oral suspension was reconstituted by the pharmacist as per specifications on the evening before dose administration and was dispensed in 5 ml hypodermic syringes before dose administration. A single dose of the assigned study drug was administered to each volunteer, with a minimum wash-out period of 14 days, followed by the alternative single-dose treatment. Volunteers fasted for at least 10 h before the morning administration of each study dose; a standard lunch was allowed 4 h after dosing. Volunteers were allowed to remain in a semi reclined position during the first 4 h after dosing. They were required to abstain from drinking water 1 h before and 2 h after dosing. After that, water was allowed ad libitum. The subsequent meals (snacks, dinner and breakfast) were served at approximately 8, 12 and 24 h post dose respectively.

Volunteers were also abstained from caffeine, alcohol, xanthine containing food, smoking or tobacco use for 12 h before and 24 h after drug administration. They were further instructed to abstain from above till the last sampling. Volunteers were prohibited from strenuous exercise and were confined to the pharmacokinetic unit until 24 h post dose.

The plasma concentrations of olanzapine were analysed using the LC-MS/MS technique in accordance with GLP guidelines. The analyst was held blind in respect of the drug administered in each specific period. For this purposes the labels of the plasma samples only contained information regarding the study period but no information which drug was administered in the respective period.

During the study, each volunteer was observed and encouraged to report any adverse event. Pulse and BP were monitored at pre-dose, 2, 4, 6 and 12 h post-dose and at the end of each period of the study. Prior to discharge, at the end of each study period a brief medical examination was performed.

*For Tmax, Median (range) is reported SD is standard deviation for n = 16 observations. 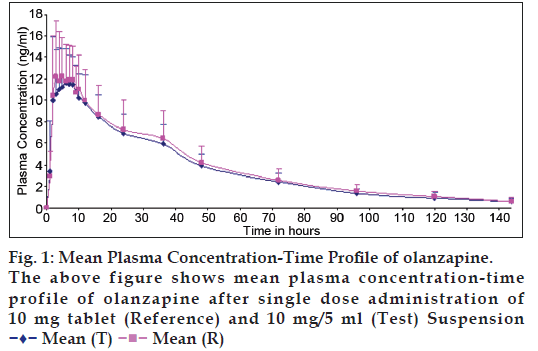 Both the olanzapine 10 mg/5 ml powder for suspension and olanzapine 10 mg orally disintegrating tablet were well tolerated. No serious adverse events were reported. In all the volunteers drowsiness was reported as an adverse event, which was attributed to the pharmacological action of olanzapine.

In five volunteers, elevation in their liver function tests (LFTs) was reported at the end of the study safety evaluation. These elevations were clinically non-significant. The volunteers were informed about the same and were advised for a follow up after 15 days. Three out of five volunteers reported to the clinical facility for follow up. A repeat analysis of their LFTs was done and they were within the normal range. However no clinical significant difference in the pre- and post-study laboratory parameters was observed.

A total of 18 volunteers were considered as an adequate sample size based on intra-subject variability to achieve 90% power at 5% level of significance. Of the total 18 volunteers, 16 volunteers completed both the periods of the study and 2 were dropped out. Hence, samples from the 16 volunteers were analyzed and their plasma concentration data were included in pharmacokinetic and statistical analysis. The power of the study was 100% for log-trasformed Cmax, AUC0-t, and AUC0-inf.

The reported mean peak plasma concentrations (14.470±4.25 ng/ml) for single 10 mg orally disintegrating tablet is similar to those reported elsewhere. Both single-dose formulations (a single 10 mg orally disintegrating tablet, or 10 mg/5 ml suspension) provided similar mean Cmax values, which are within 10% of each other. Although it took slightly longer to reach the mean peak concentration with the suspension preparation (6.0 h) than it did with the single 10 mg orally disintegrating tablet (5.0 h), this is not considered to be clinically relevant. More importantly, the measured AUC0-inf values following administration of both single-dose formulations are not significantly different and maintained 90% CI within 80-125%, suggesting that the two formulations are bioequivalent.

In summary, the study has demonstrated the bioequivalence of the 10 mg tablet and the 10 mg/5 ml oral suspension of olanzapine. Although these data were collected from healthy male volunteers, they may be relevant for the majority of the intended target population (i.e persons who have difficulty swallowing tablets).

We gratefully acknowledge the help of higher management and the scientists of the clinical research department of Torrent Pharmaceuticals for their invaluable support in completion of the study.